Every morning and every evening, I sit down to express milk for a friend's baby. It's actually kind of fun to do a direct transfer because I get to see her sweet baby every couple of weeks when she comes to pick up milk. A baby can change a lot in just a couple of weeks! Seeing her baby reminds me that I'm not just growing my own baby at this point; I'm helping hers grow, too. That's two babies that I'm feeding (and two babies is a whole lot of babies to feed and feeding babies is work and sometimes I just need to be reminded of that).

I pump off 12 ounces in the morning and 12 ounces again in the evening (which totals approximately how much milk a baby consumes any given day). It can be tiresome and time consuming, but it's worth it for me (because, as I've explained before, I tended to get mastitis (or was constantly battling clogged ducts and was a cantankerous old milk cow because I was always overflowing with milk) when I didn't pump (I didn't pump with either Rachel or Miriam)).

The mornings can be difficult, especially if I have to leave the house very early (I won't say how early is too early; I'll just say that getting the whole family out the door for 9:00 church is a challenge). But even if I don't have to leave the house early it can still be a challenge. Sometimes I end up nursing Alexander on one side, pumping on the other side, all while snuggling Miriam, who is likely demanding that I read her a story ("Okay, now turn the page," I'll prompt her every few sentences).

Now that Alexander is getting bigger and older and more interactive, pumping in the mornings can sometimes go swimmingly well (when he is happy to kick around on the floor or takes a nicely timed nap in his bed) or he can fuss and demand to be held, which is cumbersome. Or he'll do a big poop in the middle of pumping and I'll have to stop and change him, and so on. Really pumping doesn't take that long, but when you factor in all the interruptions...time adds up.

Here he is, snoozing across my lap while I finish up pumping: 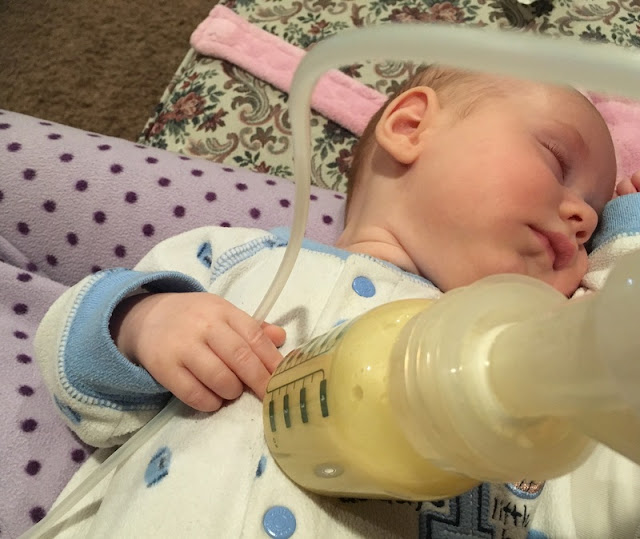 Recently he's figured out how to grab things and bring them to his mouth, so he'll often play with the tubes for the pump. 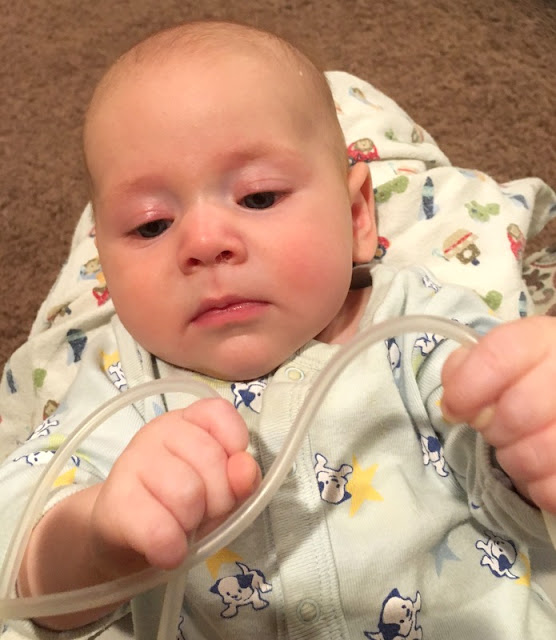 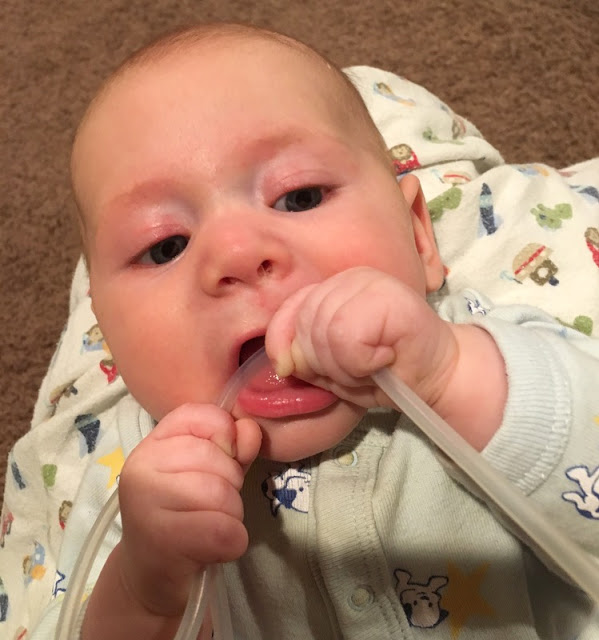 Sometimes I have to take them away from him because he'll kink them and cut off the air supply (which kills the whole vacuum effect of the pump), but he usually stays pretty happy when I take them away (probably because he knows he can just grab them again). 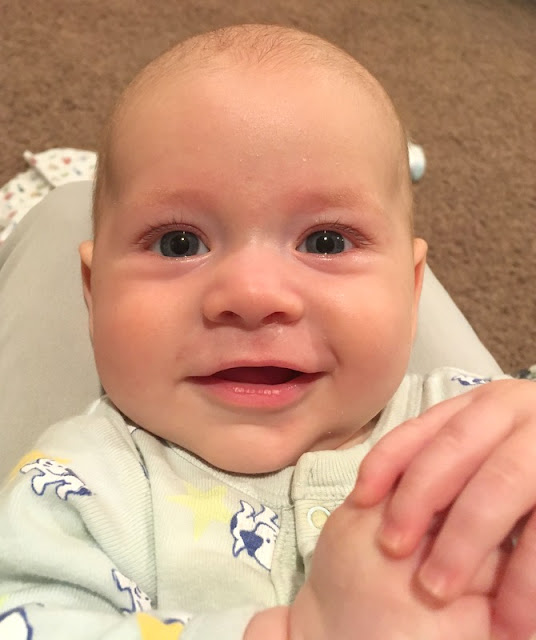 Pumping in the evening has been easier lately, now that Alexander has somewhat of a bedtime. I can put him down for the night (he doesn't sleep through the whole night yet (he's nursing right now, for example) but he's really a pretty dependable sleeper) and then I can settle down to pump while relaxing with a show (sometimes even with Andrew). I've most recently caught up with This Is Us.

I was just watching the Super Bowl episode last night when I heard Zoë throwing up in her bed, so instead of finishing that episode I watched a Mickey Mouse version of The Three Musketeers followed up with Moana before I decided Zoë had officially finished throwing up for the evening (and convinced her to actually get back in her bed).

Part of me was hoping to finish watching that episode tonight (it's the one with the fire, guys—I think Jack dies!) but Andrew hasn't been watching it and he had time for a show tonight so he asked if I wanted to watch an episode of The Crown. So that's what we did, eventually. First he was doing some work stuff and I was going through some pictures. He finished before I did and announced, "Well, I'm ready to pump."

I was about to ask him if that meant he was going to start feeding Alexander in the middle of the night, too, when he said, "What I mean is, I'm ready to sit with you while you pump, when you're ready to pump."

...which I usually am, every morning and evening.
Posted by Nancy at 1:38 AM