Sunday, that one day

Emily and Morgan's original plan was to stay overnight on Saturday and Sunday, but then a big winter storm was due to roll in (the most significant storm of the season) so they decided to head home on Sunday afternoon instead, which was a little bit sad for everyone. We had a fun time playing together on Sunday after church, though!

We played Pie Face and had tickle wars and held lots and lots of babies.

Here are some pictures of us together:

Here are a few of Alexander and Maren chilling on the floor together (he has more than caught up to her in size—she's a month older than he is and he was smaller than birth...but look at them now!): 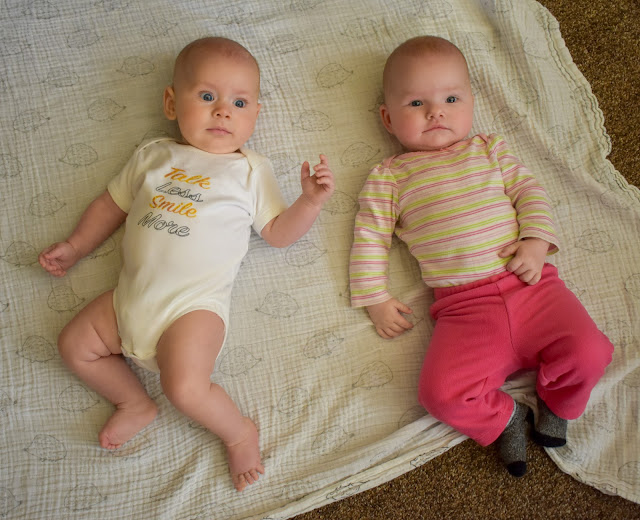 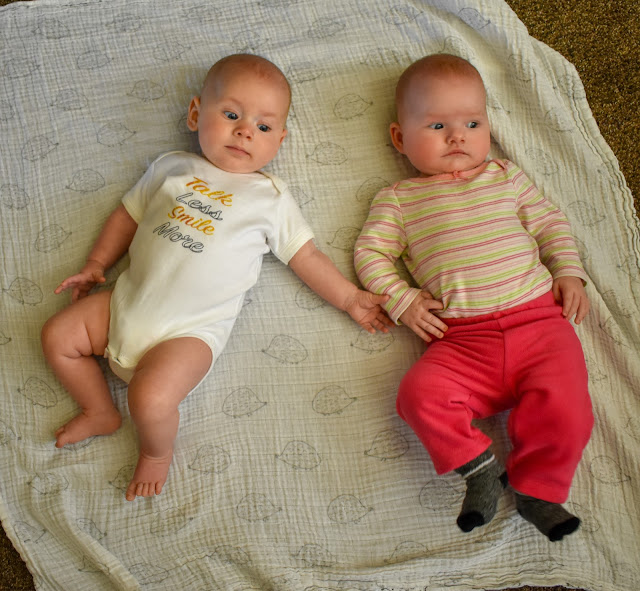 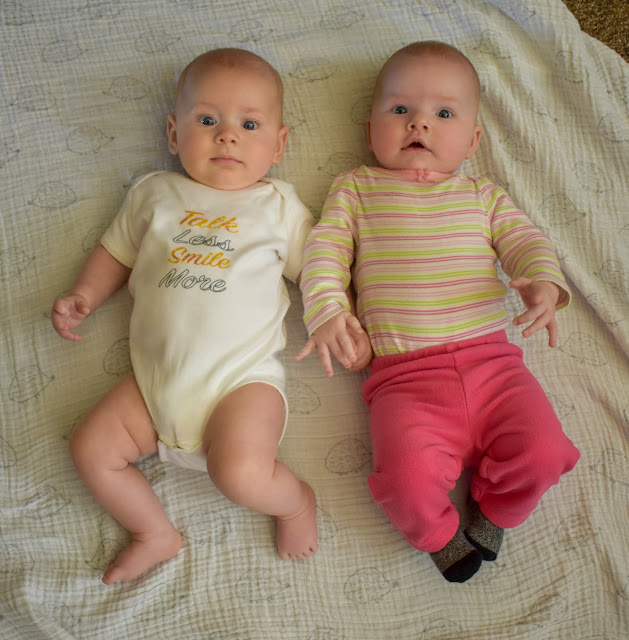 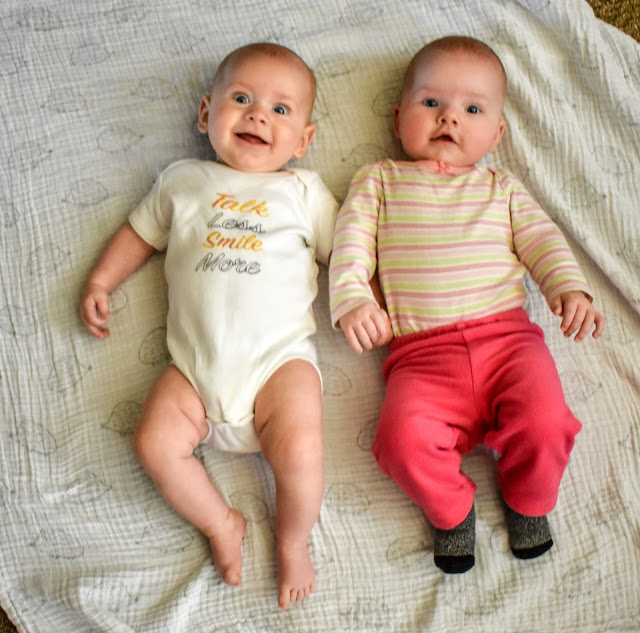 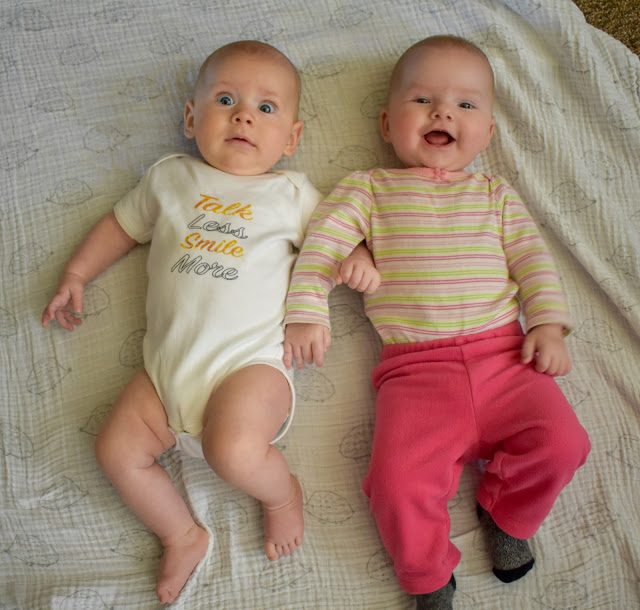 Everyone was so interested in the babies that people started joining them...


In case you were wondering, Maren only brought one Sunday dress with her, which just happened to be polka-dotted (or, as Maren says, "coconutted"), so Zoë, of course, ran up to her bedroom to find her polka-dotted dress so that they could be twins again.

This one is the last of the series; things were starting to get rather chaotic down there. I turned to Emily and said, "Look what we did in just three short years!" 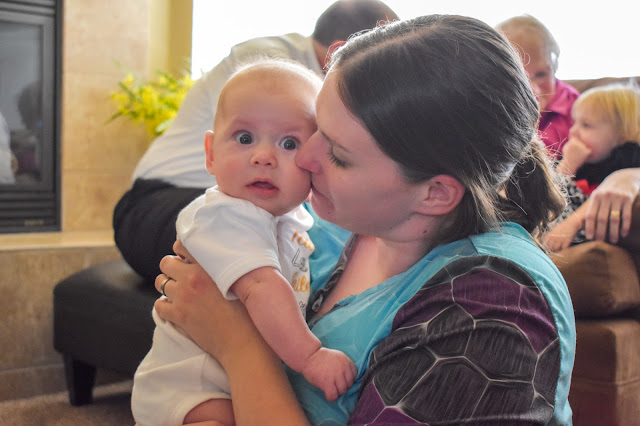 Here's Grandpa with Gavin and Benjamin: 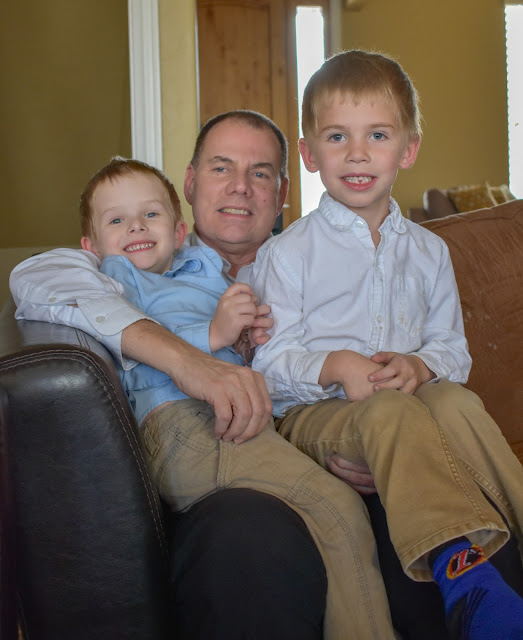 And here's Benjamin being attacked by a tickle bug (there were all sorts of tickle bugs yesterday): 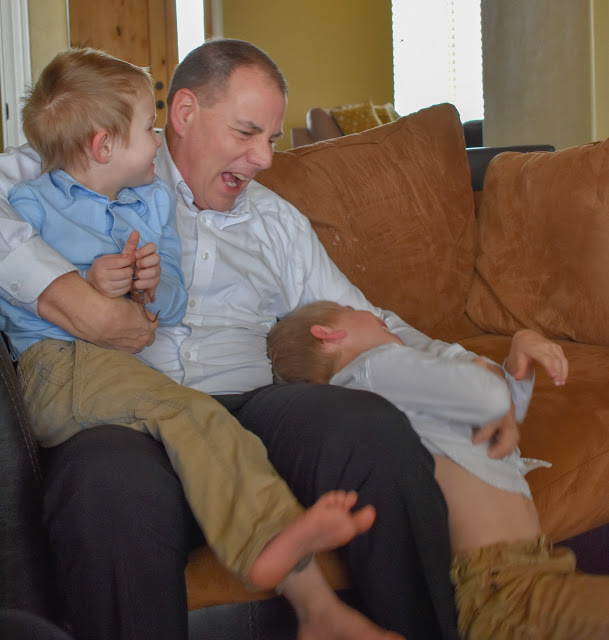 Gavin avenged his cousin's fall from the couch by attacking Grandpa with a tickle bug: 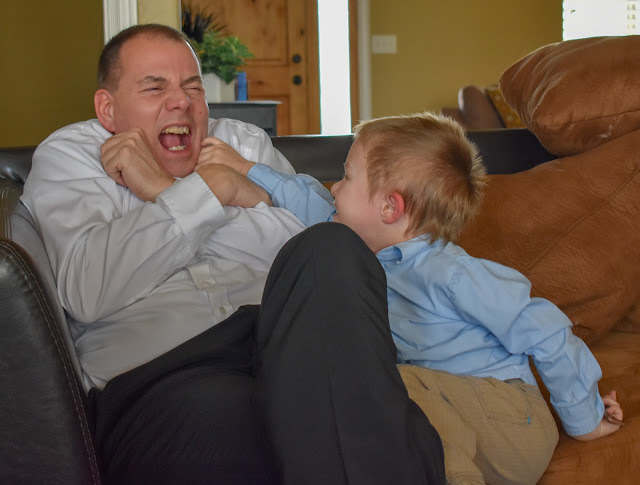 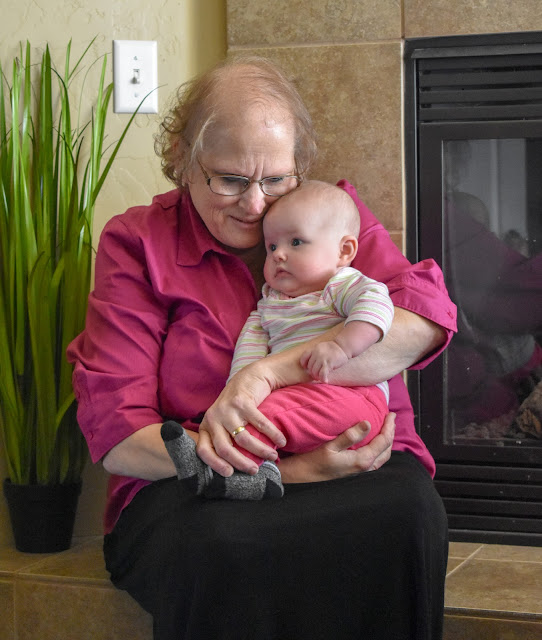 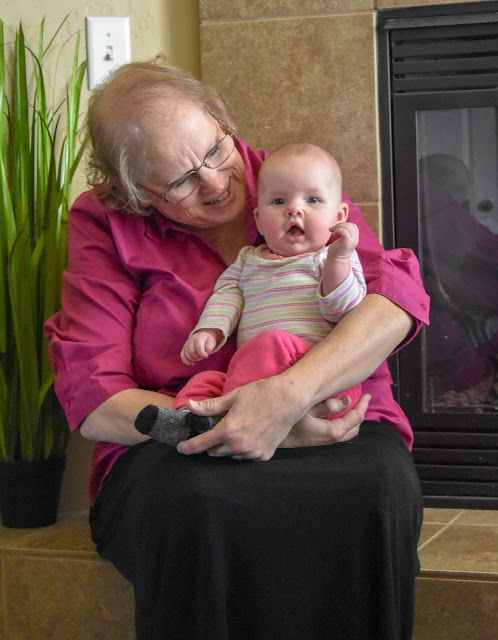 And here's Logan trying to sneak a touch on Grandma's special things: 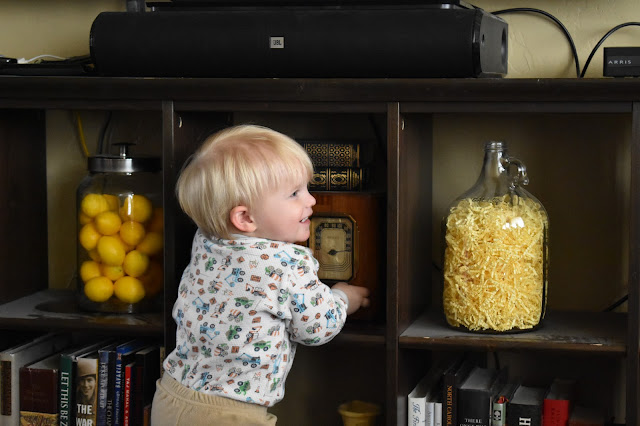 Here's Zoë and Arwyn palling around on Emily's lap: 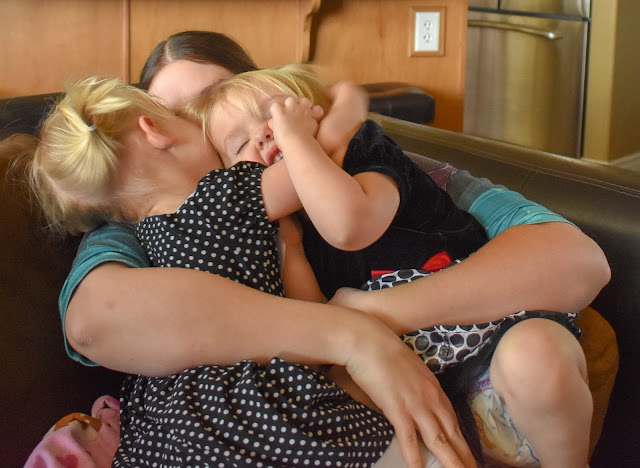 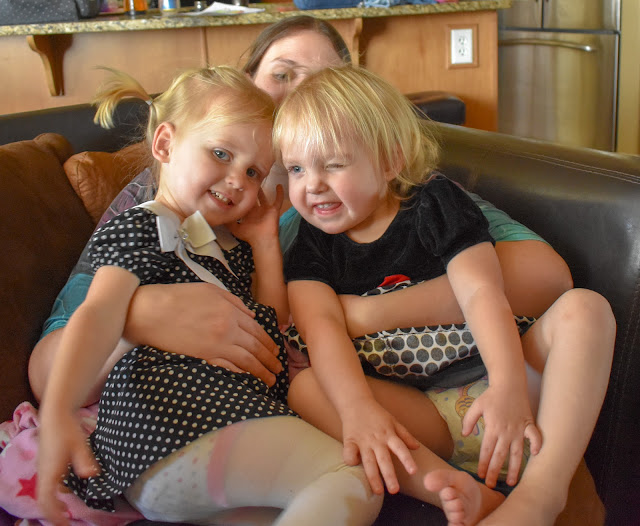 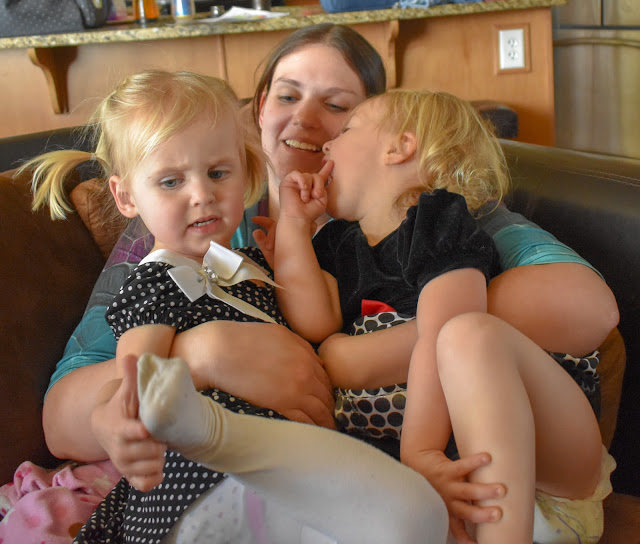 And here's Zoë holding Arwyn (she loves holding babies (she held Arwyn for a good fifteen minutes at Grandma's birthday party (because Arwyn isn't wriggly like Alexander is) and then she came up to me and said, "I held Baby Arwyn but I didn't hold Baby 'Ander yet!"): 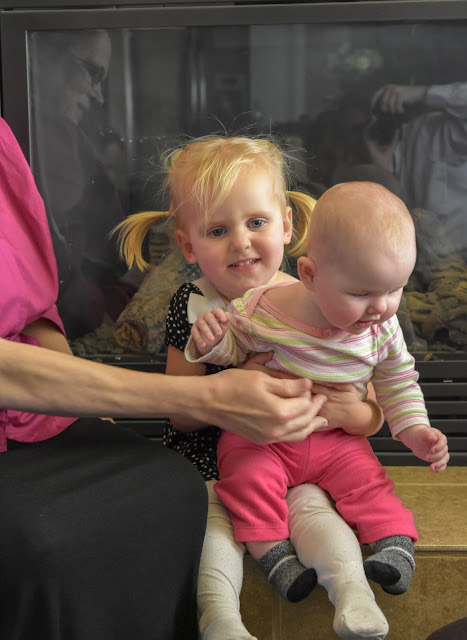 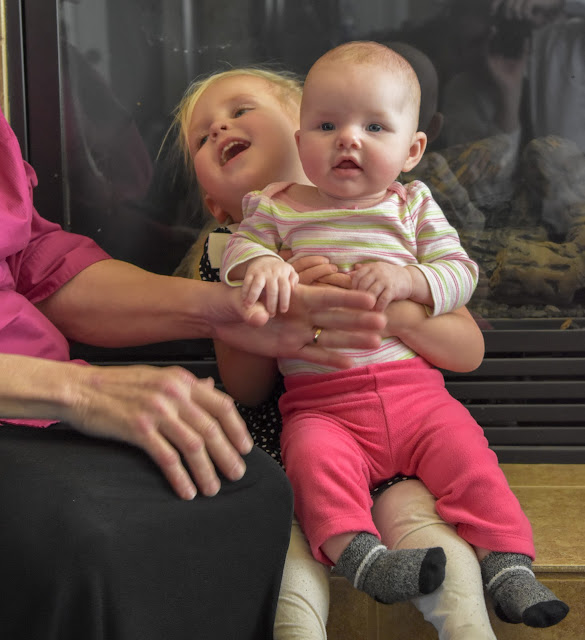 Here's Emily holding Rachel, who is starting to be too big to hold these days: 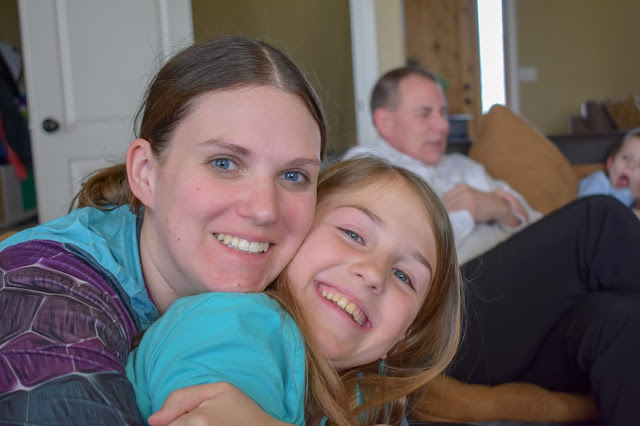 And here they are making goofy faces together: 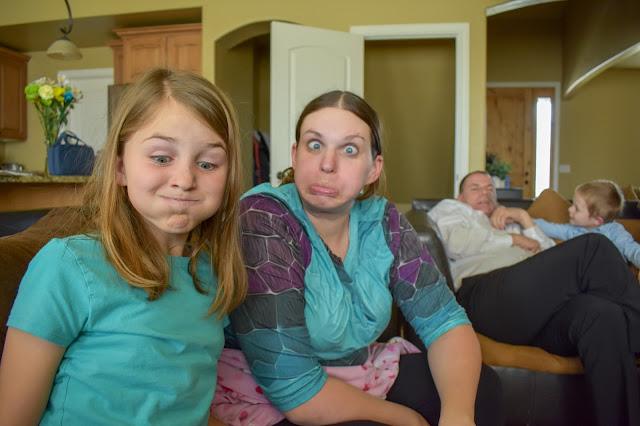 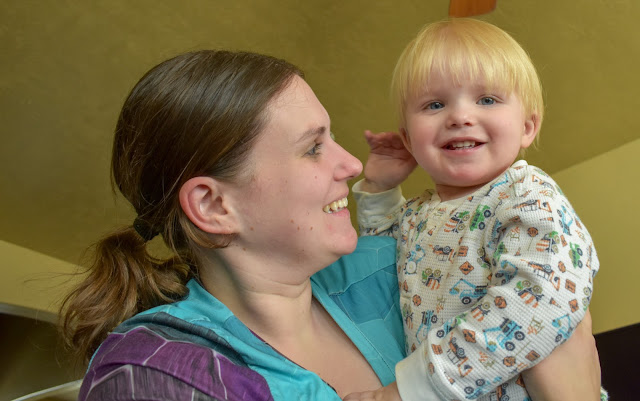 And me with Alexander: 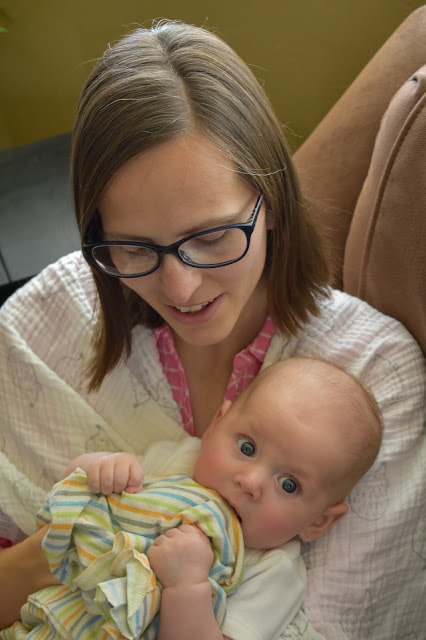 Here's Logan getting some tickles from Grandpa: 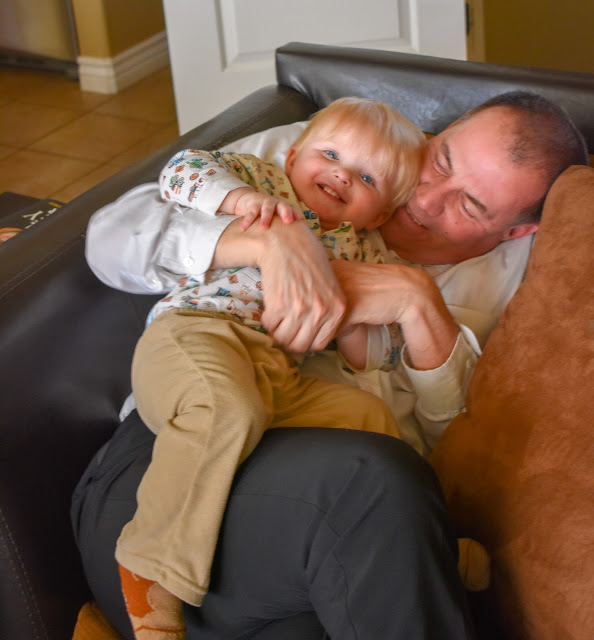 And here are two of the biggest cousins holding the two littlest cousins: 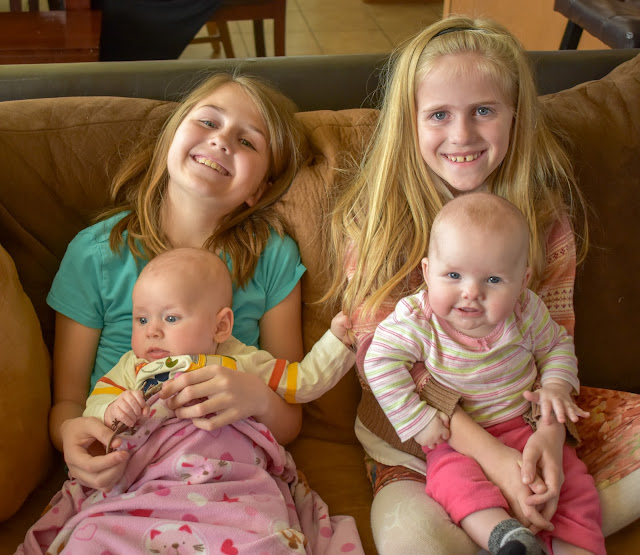 Miriam had been at Aunt Linda's house for piano lessons and had just gotten home, which is why there are fewer pictures of her. But her piano lessons are going wonderfully. She played You've Had a Birthday at Grandma's birthday party and did just great (after only a week of practicing).

Here's Grandma helping the little twins get a snack: 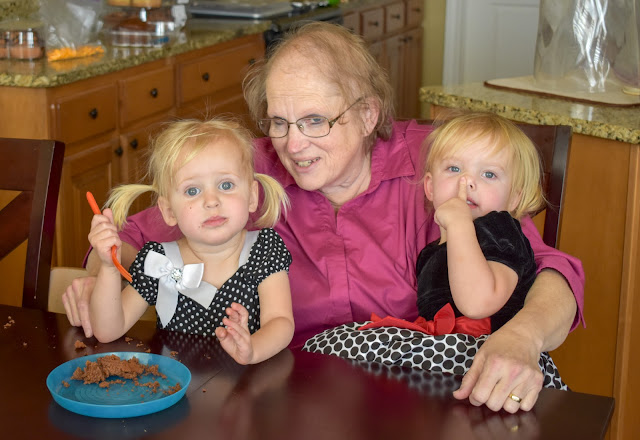 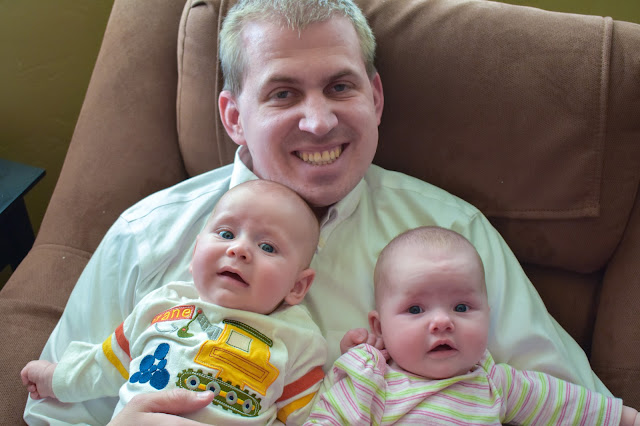 Emily handed him Arwyn the night before so he could hold her while Emily got a bottle ready. Arwyn looked up at Andrew, Andrew said, "Hi there!" and Arwyn burst into tears. It was pretty funny (but don't worry, Arwyn, he'll grow on you (Alexander, you're pretty much stuck with him, so...)).

No. He was referring to Baby Andrew.

He tackled Andrew and held him down while the kids (mostly Rachel and Miriam) tickled his feet: 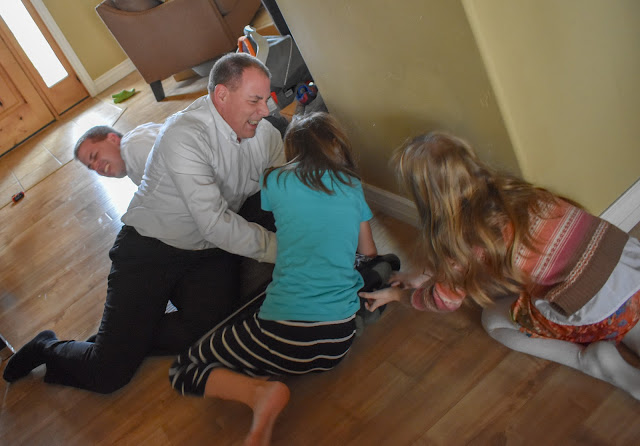 Although it was a good thing Emily and Morgan left when they did (because we got about ten inches of snow overnight), my little people were a little disappointed to have to say goodbye to their cousins earlier than planned. They had been hoping to convince their cousins' parents to allow them to have a cousin campout in the play room, but instead they had to settle for a sibling sleepover. We set up our big play tent and the kids planned on sleeping two to a side, but they all ended up squishing into the same side of the tent.

Here's Benjamin and Zoë fast asleep, waiting for Rachel and Miriam to join them: 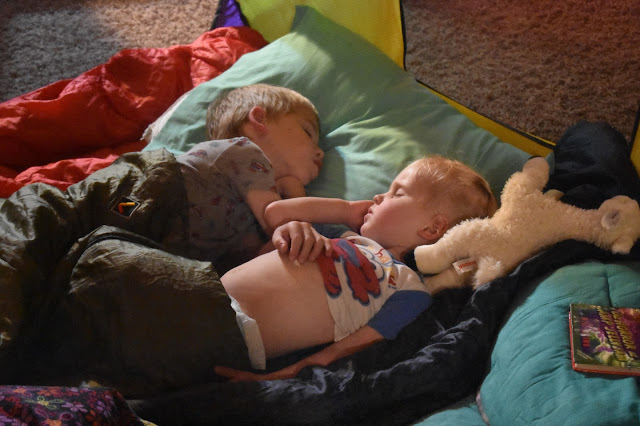 (Rachel and Miriam also got to watch Cast Away last night).
Posted by Nancy at 12:39 AM