Before Andrew left for work this morning he shovelled the driveway, but it kept on snowing so by the time I was sending the kids to school we had to wade through a couple more inches (Grandpa ended up shovelling again later in the morning). I sent Benjamin waddling along with his sisters, dressed in his entire snowsuit.

I'm pretty sure I was the only mom in the whole school that made her kids walk to school today (in the snow, both ways).

When we were walking home from school, Benjamin asked me if I'd help him build a snowman, so I said that I would...after lunch, if I could get Alexander to go down for a nap and squeeze in a nap myself then, yes, we could build a snowman.

Unfortunately, although we had both lunchtime and nap time, by the time we got outside the conditions just weren't right for a snowman. While I could pack a good initial ball of snow, rolling it around did nothing to increase the size of the ball. It just wouldn't pack. So a snowman was out.

Instead we started building a snow fort. Benjamin, Zoë and I worked together until Miriam came home from school (and then Miriam joined us). It was tough work! 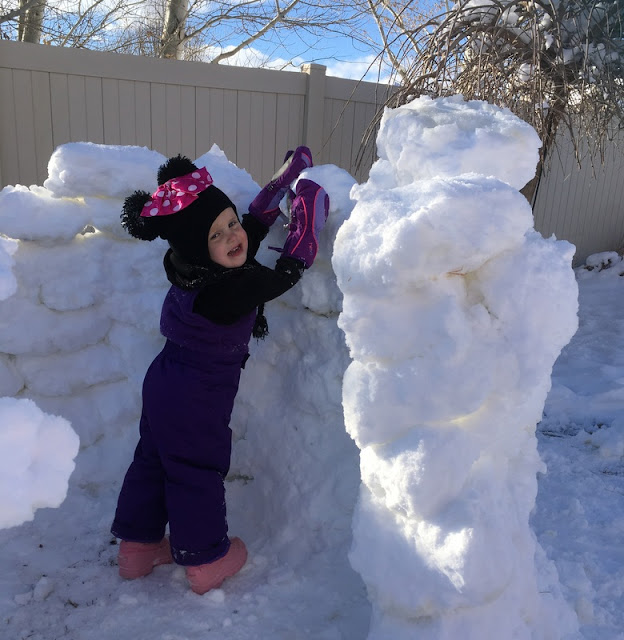 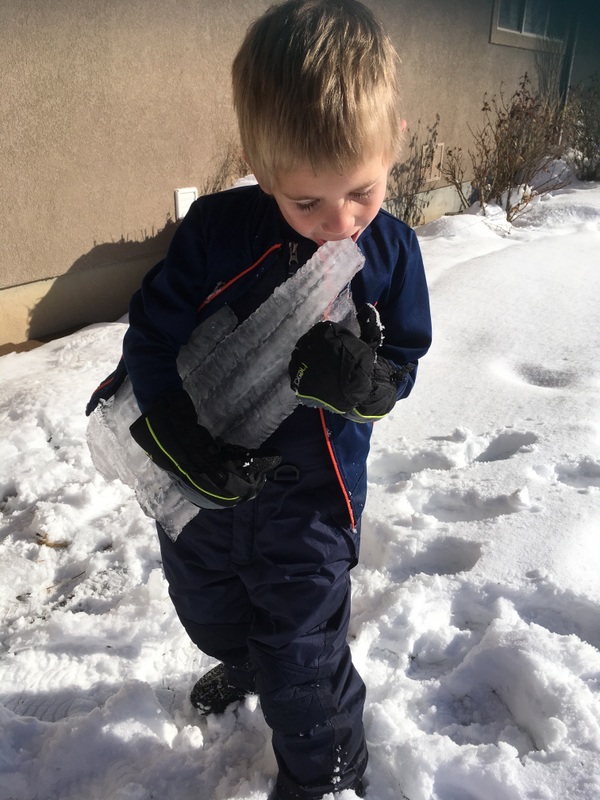 Benjamin heard the icicles crash down earlier in the day and he ran to the office to check out the damage. He was so excited that he could see parts of them scattered in the gutter and when we got outside he immediately started scavenging the ground (and shrubbery) for icicle bits.

Here's the "before" view from the office window: 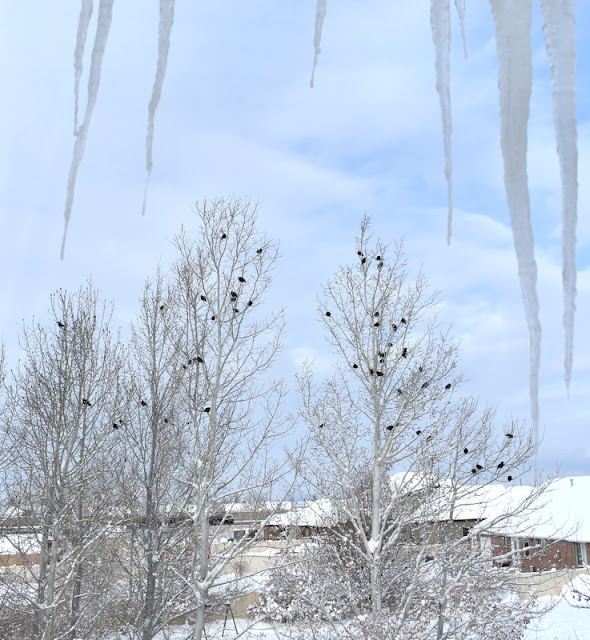 I thought those birds perched in the trees were rather pretty and it was just so neat to get to see them from this angle. Living in a two-storey house is kind of cool. 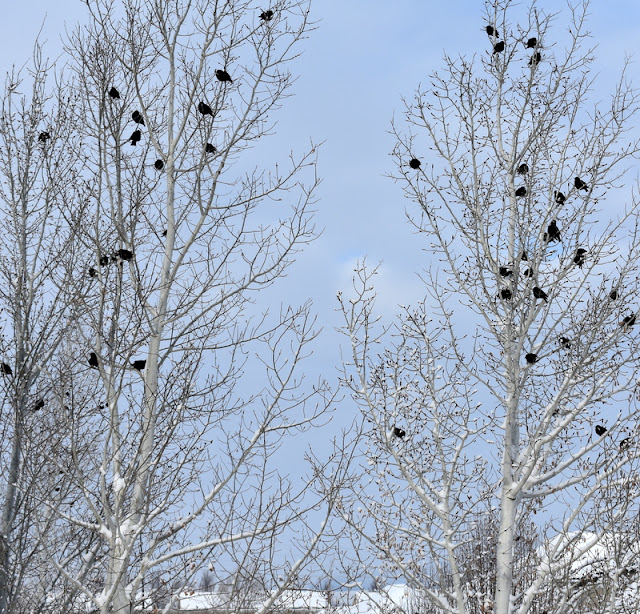 Anyway, back to the fort! Here's Miriam pitching in: 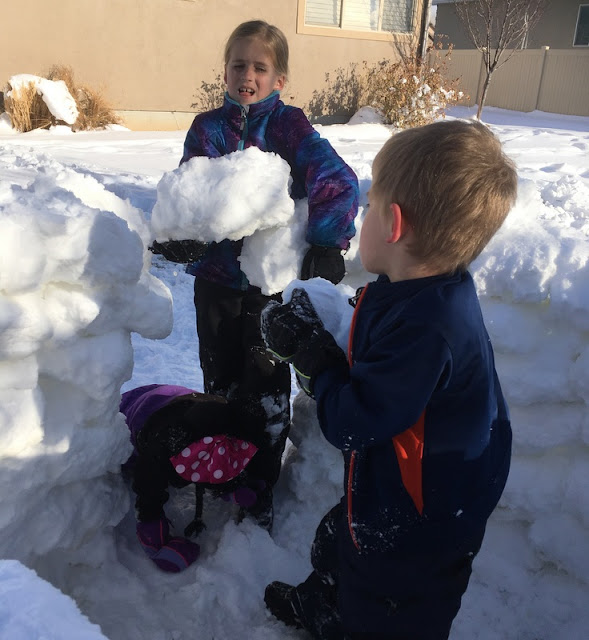 She and I were forming and placing bricks while Zoë and Benjamin filled in the gaps and patted things down. Miriam was pretty excited when she came across the chunk of snow shaped like a heart: 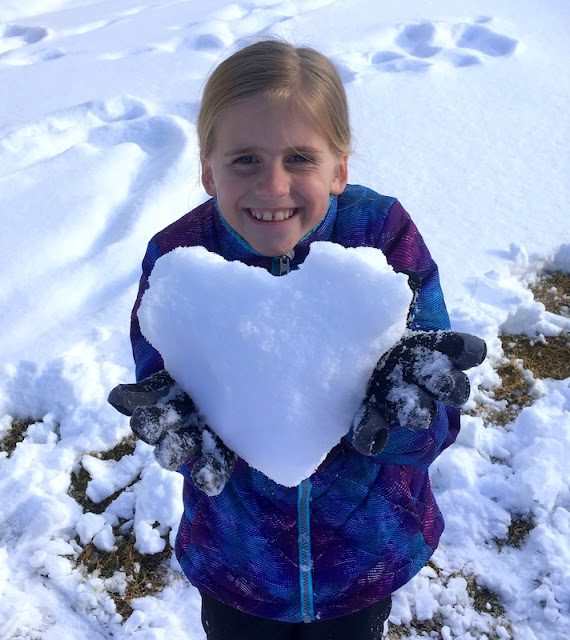 Here's another shot of the fort getting taller... 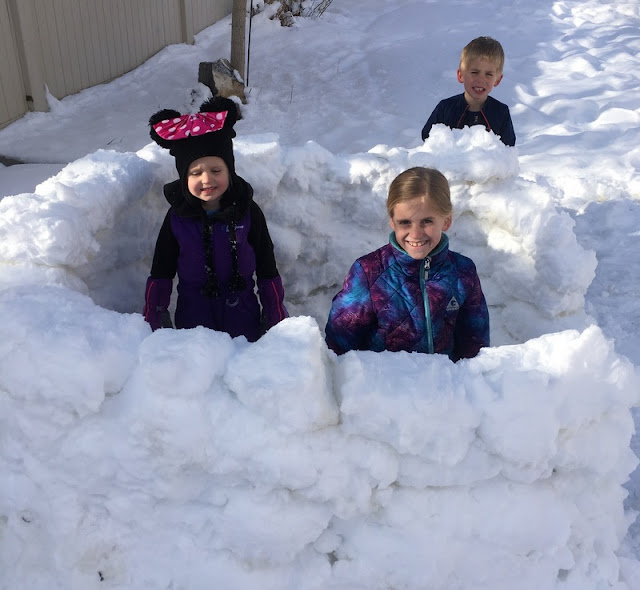 The kids really wanted to add a doorway, which is a lot harder than it looks. After several failed attempts we decided we needed some sort of support so Miriam went inside and found a box. We ripped off a flap and...presto! A doorway was born! 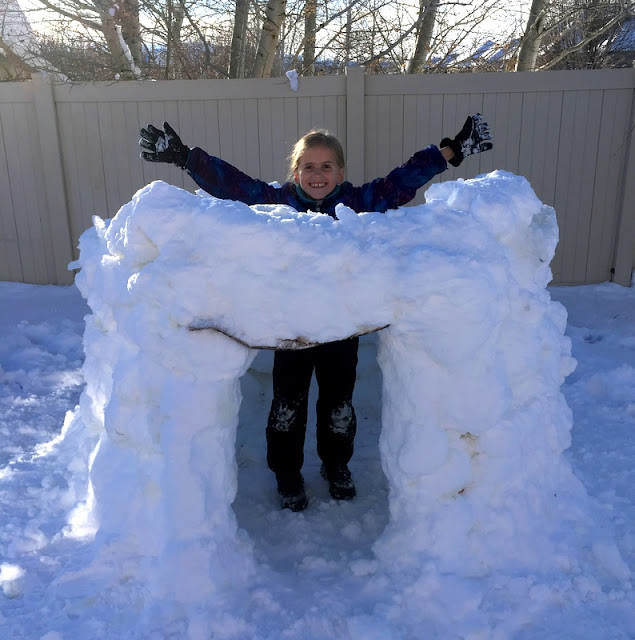 After all the trouble we had with a doorway we weren't about to attempt a roof, so we called it good and went inside (to rescue poor, starving (and poopy) Alexander from Grandma (or was it to rescue Grandma from him?)). When Daddy came home we headed back outside to show off our handy work and snap a few pictures on "the good camera." 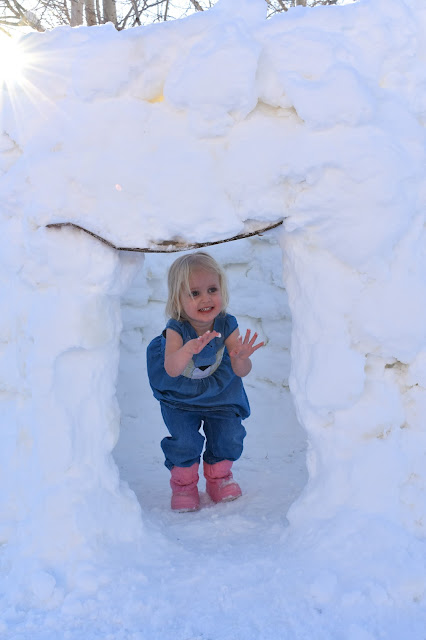 Zoë refused to put on a coat (I'm not crying cold; you're crying cold) but she was still excited to show off the fort. 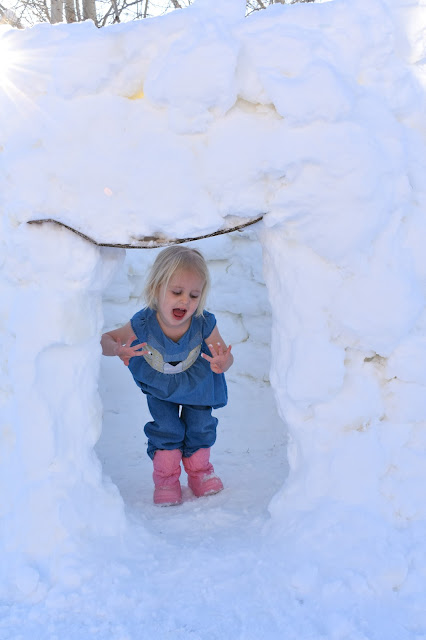 Here's Benjamin with the fort: 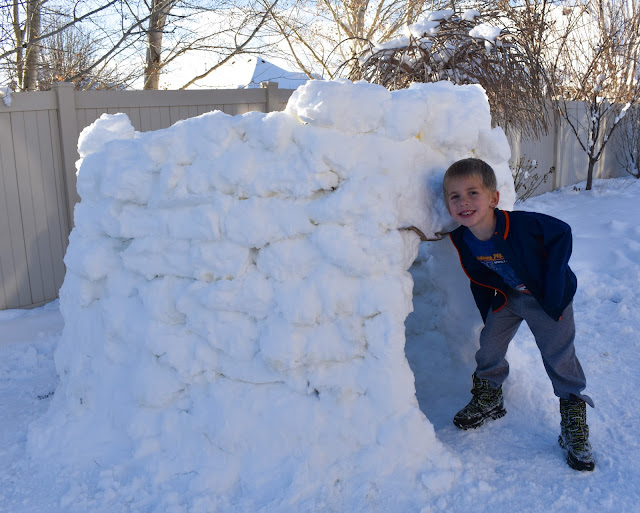 And Miriam with the fort: 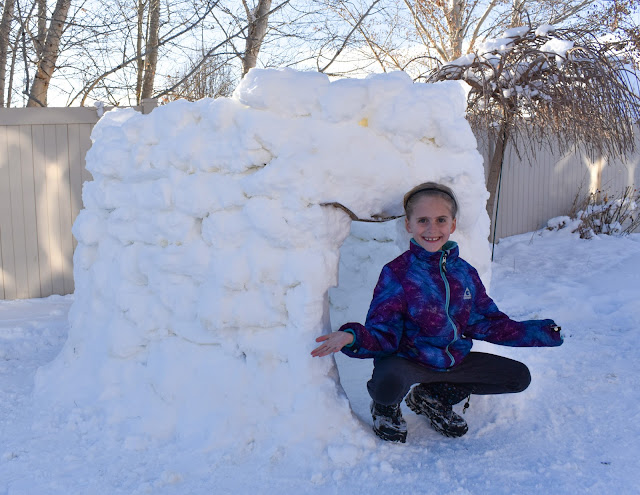 And Rachel with the fort (even though she didn't lift a finger because she was at play practice): 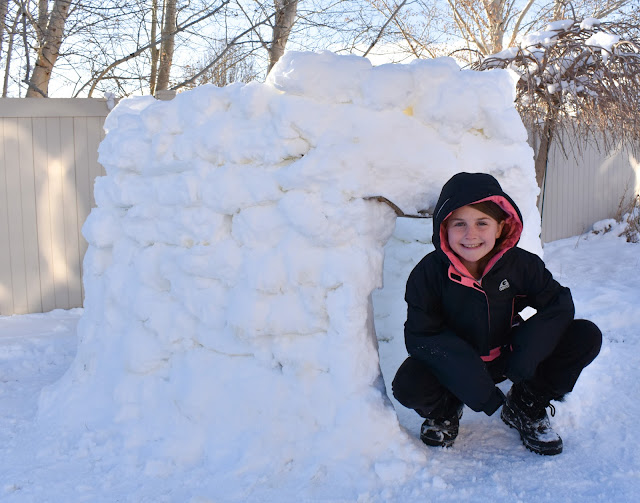 And Alexander with the fort (even though he didn't lift a finger because, let's face it, he doesn't really pull his weight around here, like, ever): 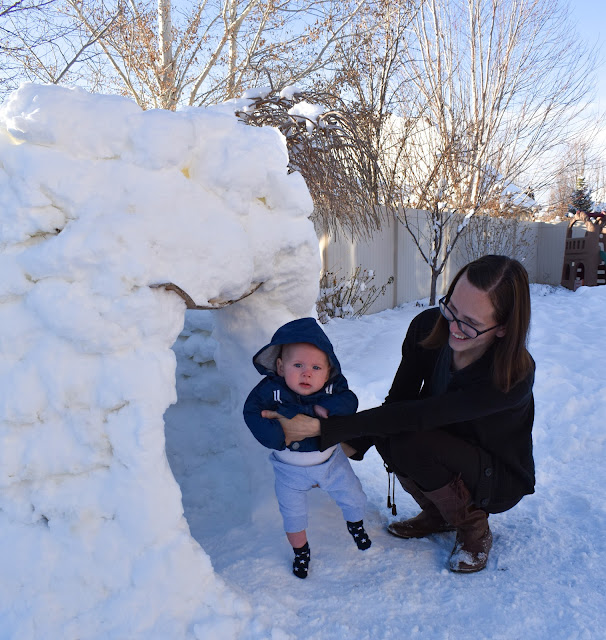 And all of us with the fort: 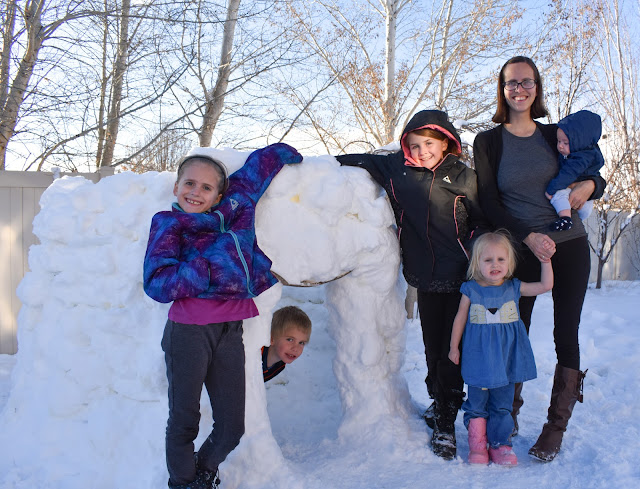 Hopefully it will withstand tomorrow's sunshine long enough for the kids to get to play in it after school. If not, we're due for more snow in the next ten days. It seems winter has finally decided to grace us with its presence.

Speaking of such things, while Benjamin was saying the prayer at lunch he asked if Heavenly Father would please make it snow up to his chin. When he was finished praying he said, through a mouthful of tortilla chip (we had nachos for lunch), "I really hope God does snow it to my chin!"

Later on in the meal he said, "You know, God made his very own footstool."

"What do you mean?" I said, not sure he knew the reference he was making (but, of course, he did).