As I mentioned, like, three weeks ago, Benjamin's kindergarten class had their "Kindy 500" on Groundhog's Day. I already feel a little bit like I'm drowning in life so I didn't feel like making a big fancy car for Benjamin and, frankly, he wasn't terribly into the idea of making a big fancy car, either.

Evidently I scarred him for life when he decided he wanted to be Thomas the Train for Halloween. How did that scar him for life? Well, I said sure and made him a train costume to wear, like a monster!

He absolutely didn't want to be stuck carrying around a cardboard vehicle with suspender straps again and made his opinion very clear on several occasions. So we kept putting off the construction of his car until one day I walked into the pantry and saw that one of the snack boxes (from the trip to Grover back in September, I believe) was already a school bus.

Benjamin loves school buses and was kind of crushed when we moved here because practically no one rides the bus, including him. Riding the bus was something he was very much looking forward to after spending the first five years of his life (that's his entire life, by the way) waiting for the bus to bring his sisters home from school every day.

I showed him the box and asked him if he'd like to personalize the bus a bit for his Kindy 500 car (by putting people in the windows instead of pictures of chip bags) and he said yes. So that's what we did. And he had a blast. And even if his car wasn't as fancy as some (because some families went all out) and even if he was wishing for shoulder straps by the end of the day (I told him we could put some on but it wasn't until the walk home that he agreed they would have been nice), he loved his bus.

Here he is during their little parade:

And here are a couple shots of him with his bus outside of the school: 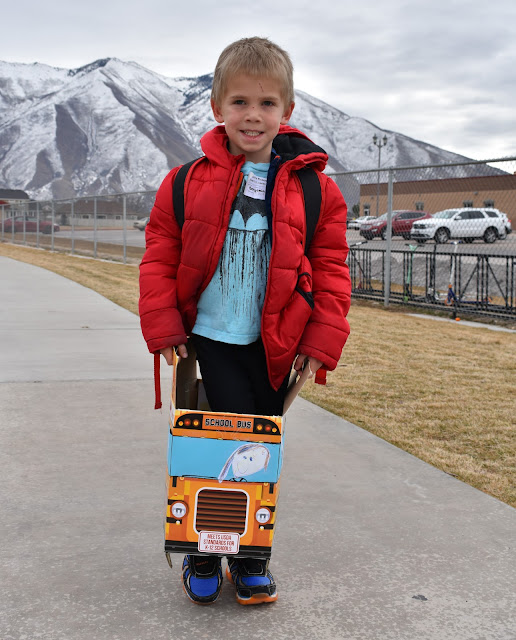 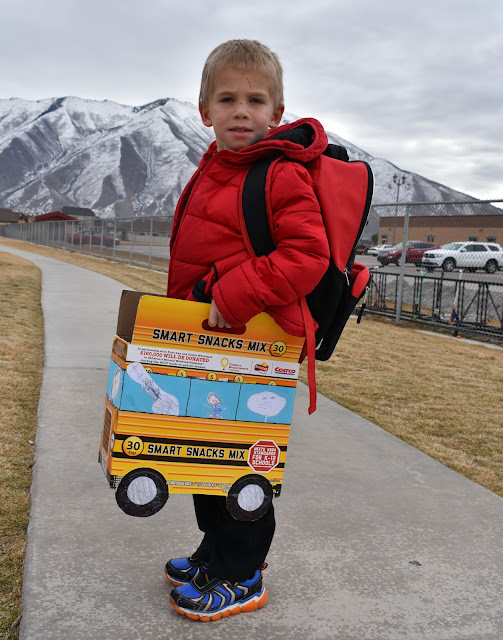 Getting myself and all five kids out the door to walk to school on time was a bit of a frenzy in the morning, but it's nice to be able to do things like this with/for them.

This Wednesday was the school science fair for the upper grades (so just Rachel this year). Rachel worked with a friend from her class and her friend's mom hosted the project at her house and did all the supervising and nagging, which I'll be forever grateful for because February was  not a top-of-my-game month.

Sometimes you just need a Kenzie's mom (or, in this case, a Tayah's mom) in your life! Perhaps one day I'll be a Kenzie's mom for someone else. It could happen.

I hadn't been very involved with the project so I decided I would definitely attend the fair. But then Zoë and Alexander got sick and took turns getting up to cry all night long (we call nights like that "yo-yo nights" because you're in and out of bed all night long, running to crying child(ren)...like a yo-yo...I guess). So on Wednesday morning I warned Rachel that I might not make it because I was so exhausted and the babies were so miserable. She acted like it was no big deal.

But then I got to thinking that it was really nice that the fair lasted until kindergarten pick up. Usually events at the school end too early in the morning to hang around the school until it's time to pick Benjamin up. When it's warm we've hung out at the city park, but it is not warm right now (not remotely) so we've started running to the school for things and then running home and then turning around and running back to the school (and by "running" I actually mean walking).

I decided that with the fair ending so close to pick up, I'd make a concerted effort to get there in time to see Rachel's project and somehow we managed to get there the last ten minutes of the fair.

Tayah's mom drove past as us as we were walking by the school and she pulled over to say that "Rachel will be so excited to see you! She wasn't sure you were going to make it." So I'm glad that I went, even though Rachel didn't look precisely thrilled to see me: 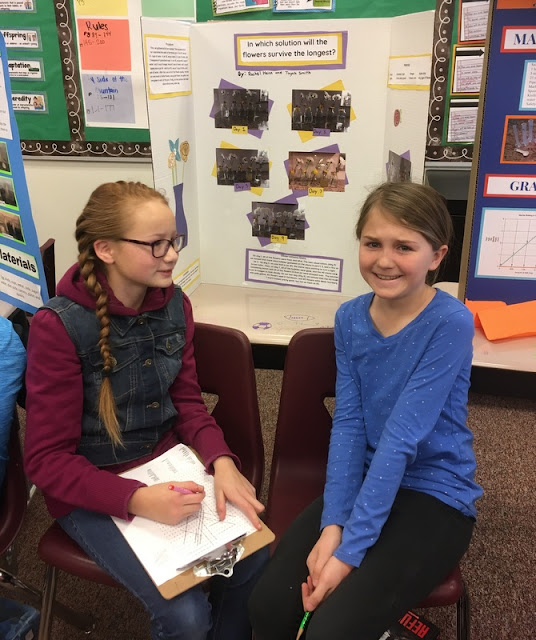 She had fun at the fair, though. The girls had about 65 people stop by to talk about their poster and they had fun working together. I've been impressed with how well Rachel's been balancing her schedule this year. With choir, piano, ukulele, and the school musical (and activity days and family time and so forth), she's been a very busy girl!
Posted by Nancy at 12:57 AM