Several weeks ago, back when we were planning on going to Mexico with Grandma and Grandpa for Christmas (a humanitarian trip), Rachel and Miriam started working on "knifty knitter" hats to take with us so they could give them away. Seeing the girls work on their hats (which I don't think either of them have finished because life got crazy) reminded Grandma of a little set of kitting looms she once was working on.

She also hadn't finished her project—a scarf—which she started before she got married and then spent the next 3+ decades carting around!

She did, however, know right where her looms were, so she got them out and told the girls they were welcome to try to finish the scarf she'd started and could have the looms. And then she died.

Continuing her project seemed too daunting to the girls so I decided I would take it up.

After all, I was the one to finish the baby blanket Grandma Sharon had been working on (for Gavin, I believe) before she passed away. I probably didn't finish it quite like she would have, but I studied it and figured out what pattern I thought she was using and finished it off.

To finish Grandma's scarf I had to watch a little tutorial and then use a little trial and error (I'd only ever worked a loom in the round before) and by the time I was getting the hang of things I noticed that my stitches didn't match Karen's stitches at all!

You can definitely tell where one woman left off in the 1980s and the other began in 2018!


I was going to finish it secretly for Miriam for Christmas, since she'd hinted to me several times that she wants an infinity scarf (apparently since she was three years old and her friend Carolina Hennessee wore one—so it's been her desire for a long time), but then she caught me in the act.

"Oooh!" she crooned. "You're finishing Grandma's scarf! Who are you going to give it to?"

"You could give it to Grandpa!" she suggested. "It would help him remember Grandma."

"But I don't really see him as a scarf-wearing person," she added, wrinkling her nose and shaking her head.

"There's Rachel," she brought up generously before saying, "But I don't really see her as a scarf person either. That sure is beautiful."

"Can you make it an infinity scarf?" she asked. "Can you finish it by tomorrow?!"

So I stayed up (too) late last night finishing the scarf so she could wear it for Sing-Around-the-Tree at school. And I made it into an infinity scarf, which is basically a scarf sewn into a loop so you don't have to tie it.

Here is Miriam is trying to spot me out in the audience (she's the one with the red infinity scarf on, obviously (far right)): 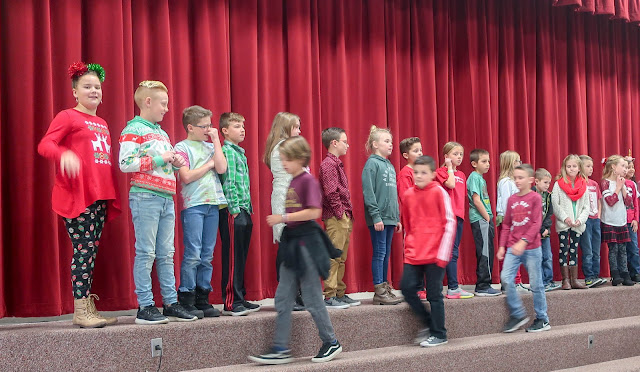 She wore it all day and loved every minute of it.

I thought about it all day—about how it had sat, unfinished, for years; about the sacredness of finishing someone else's work; about how our stitches didn't quite match but were both valid ways of doing things; about how they came together to form a beautiful, warm, functional thing; about infinite goodness, infinite wisdom, infinite love, infinite joy; about eternity.

Perhaps one day those thoughts will be a poem.

Today they are a scarf.

Wrapping together at least three generations in one eternal round.
Posted by Nancy at 2:49 AM