Christmas preparations are in full swing at our house. Whatever that means. It certainly feels more like going through the motions of getting ready for Christmas than anything else. I hope the children are at least feeling some spark of magic and anticipation because the grown ups are all feeling rather...meh. 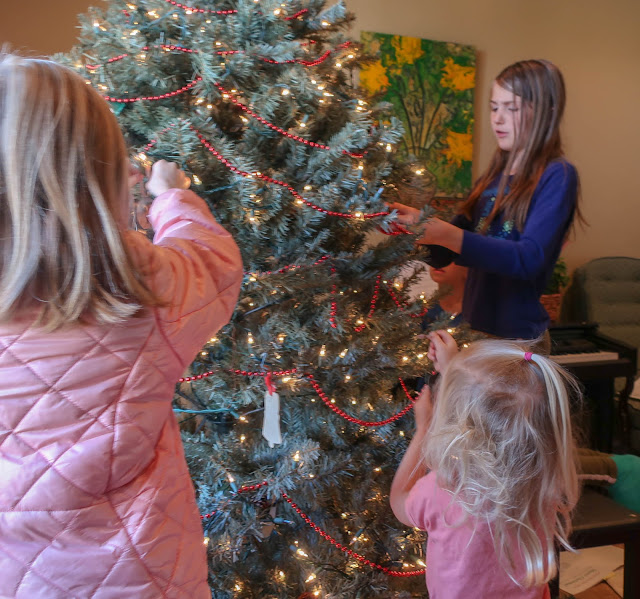 We put up our tree the day after Thanksgiving (and by "we" I mean that Rachel and Miriam did it all on their own and then I put on the lights and beads). The children more or less got along for the trimming, which was wonderful. Zoë had some serious bedhead going on (but we fixed it for later pictures): 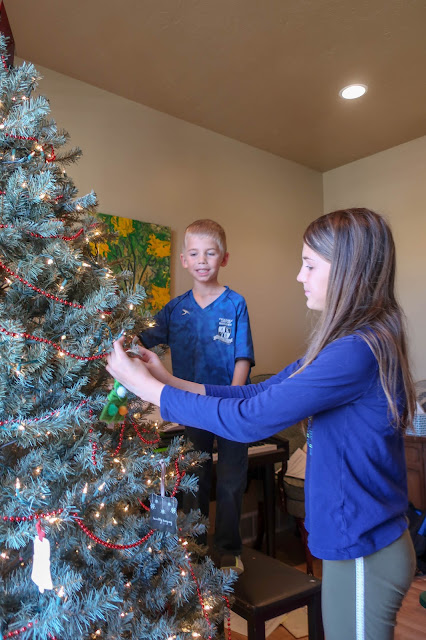 I love the joy of rediscovery as the children unearth their favourite ornaments each year: 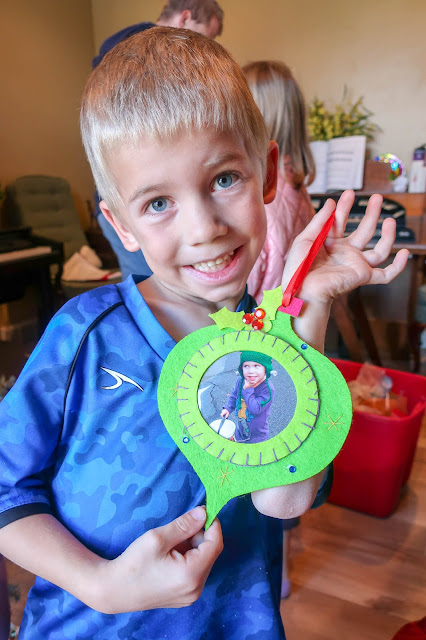 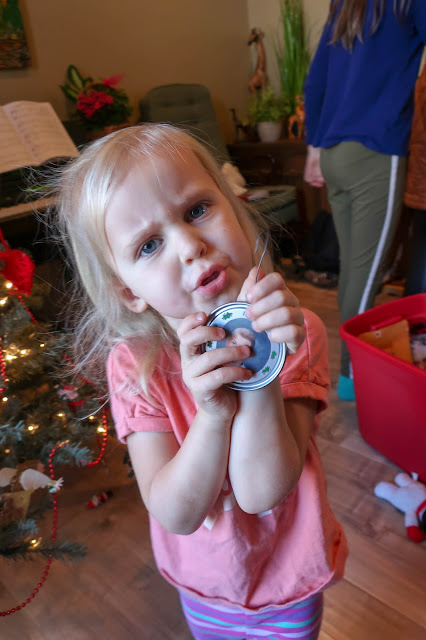 They were all so excited the whole time: 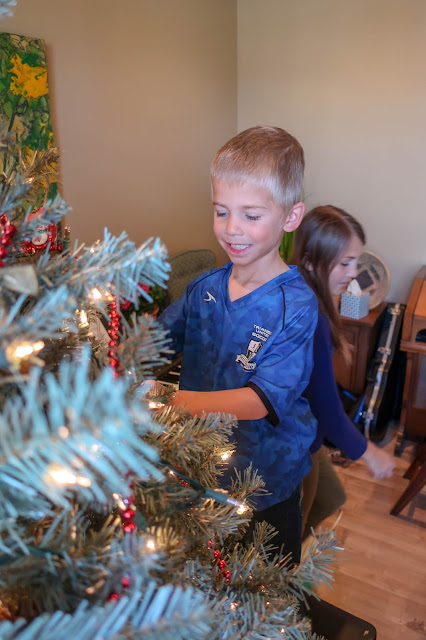 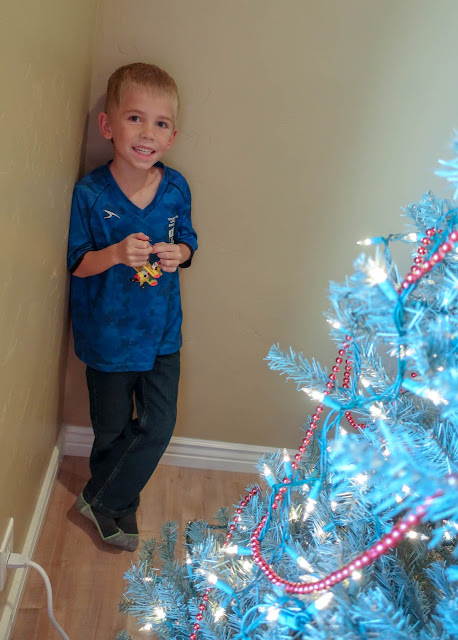 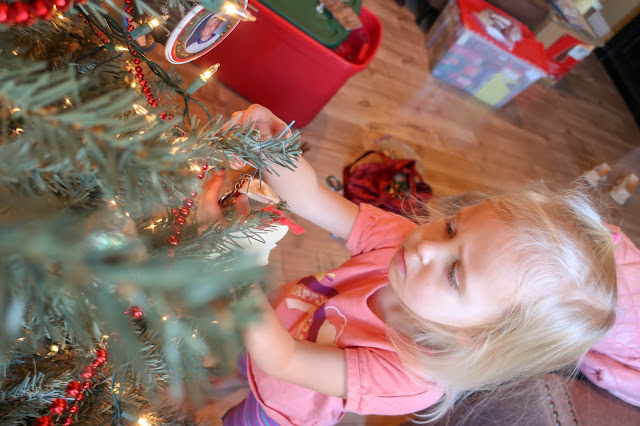 Even Alexander got in on the action a little bit (and has been remarkably good about leaving the tree alone; in fact, before I put away our boxes of Christmas things away he found an ornament that didn't make it on the tree and he crawled over to try to put it on the tree (I haven't seen him take a single decoration off)): 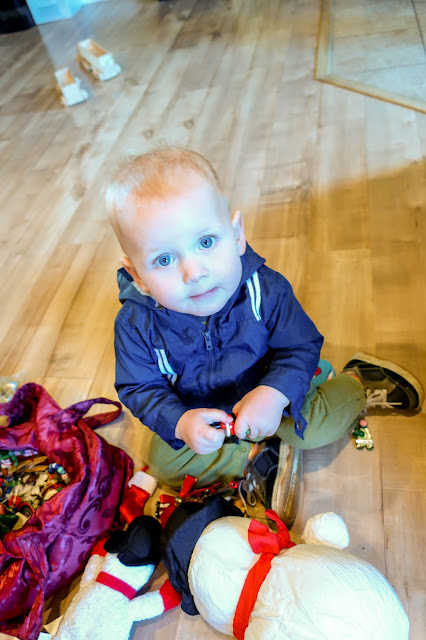 Here's Zoë's freshly-brushed hair (much better than before): 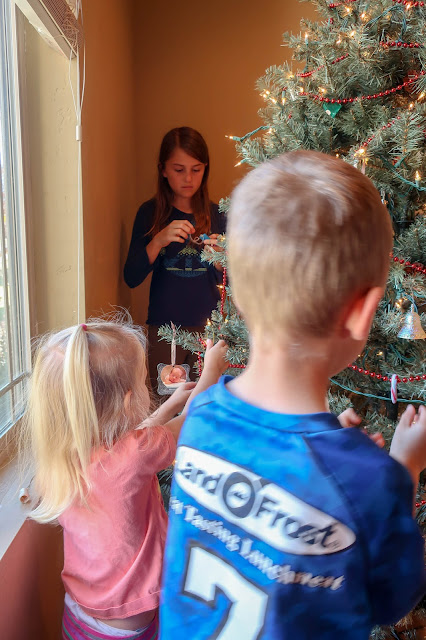 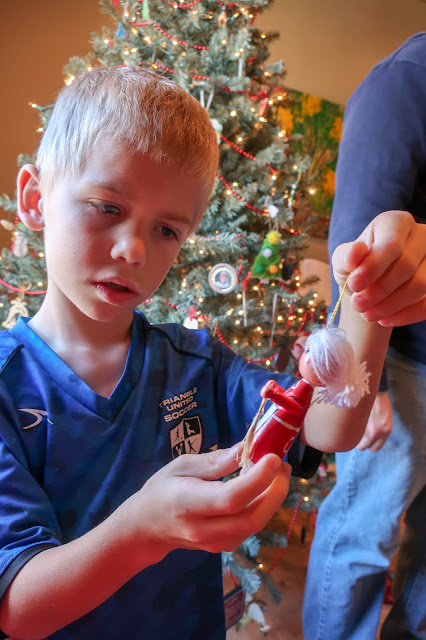 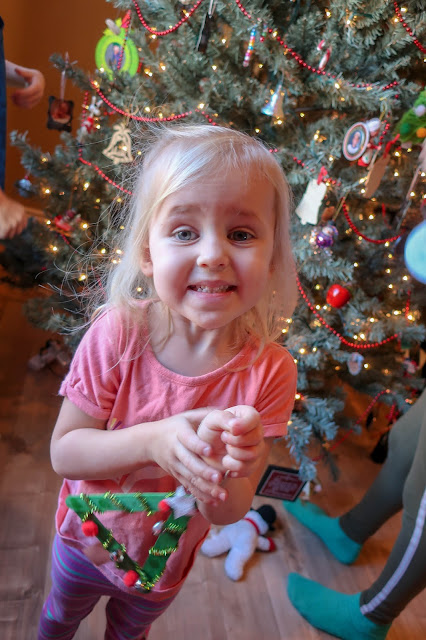 Clearly Benjamin and Zoë were the most excited about decorating the tree (and looking through these pictures has me wondering where Miriam escaped to; she was there, but I suppose I was more interested in making sure Benjamin and Zoë didn't make a mess of anything).

Here's Andrew working on a tangle of ornaments (he joined us late because he was out doing...something...I don't remember what): 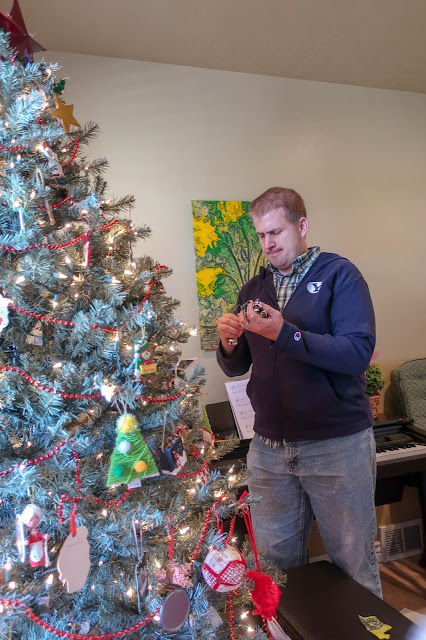 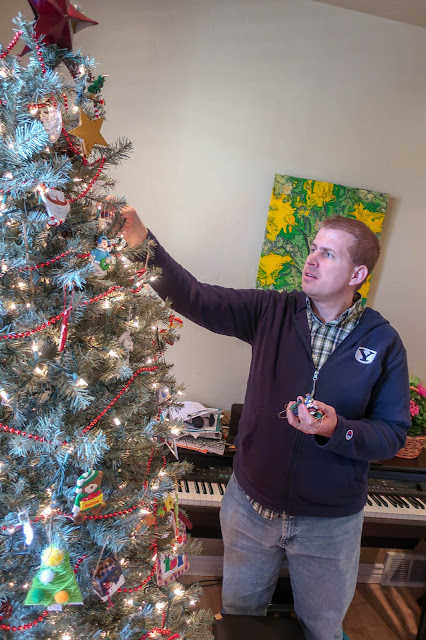 Here's Rachel and Alexander in front of the tree: 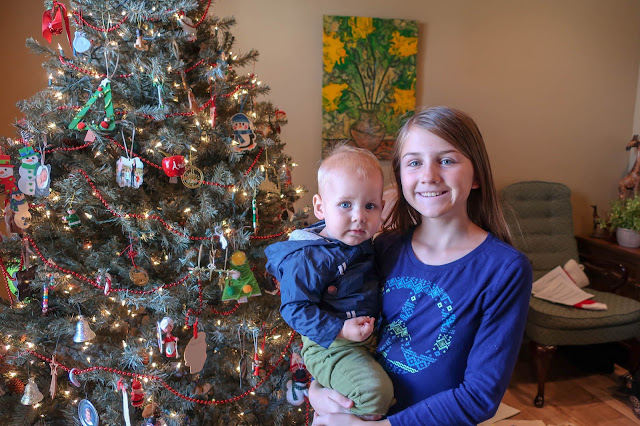 And here's Emily holding up the snowman she wrote on at our wedding:

Going through these snowmen decorations every year is one of my favourite traditions. Some of them are silly, some have advice and well wishes. Over the years our snowmen have begun to bring us words from beyond the grave—messages from Aunt Susan, Dorothy Gillespie, and now Grandma.

And that's special, too (though the silly messages are also lovely).

The tree has been sparkling away in the corner of the music room for the past three weeks and I've set up nativity scenes around the house and we've been quite diligent about remember to do our advent calendars (we have Star Wars Lego, our nativity countdown, our stockings filled with candy, and the Christmas Treasury book by the Newells) and even though the calendar keeps saying it is getting closer, it doesn't feel like Christmas could possibly come this year.

So we keep going through the actions—we take the kids to look at lights, we watch Christmas movies, we read Christmas stories. Last week I sat down with the kids and made some bead decorations with the kids (we found some kits in Karen's craft room). 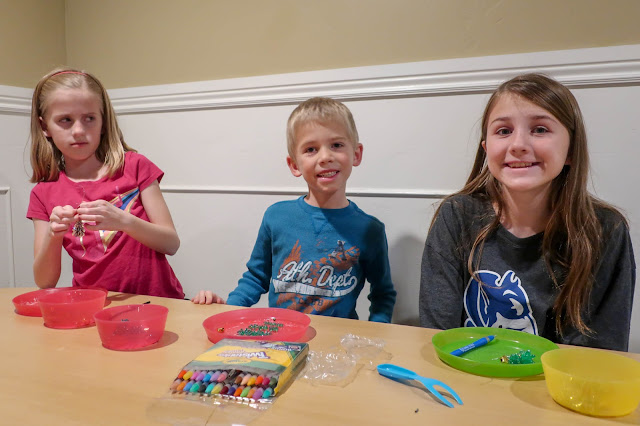 And here are the kids working hard at stringing their beads: 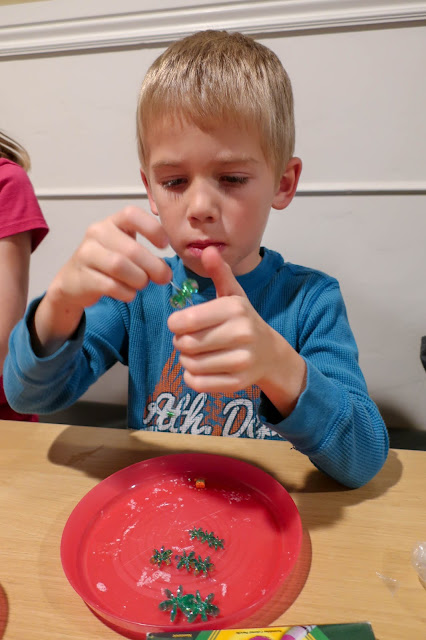 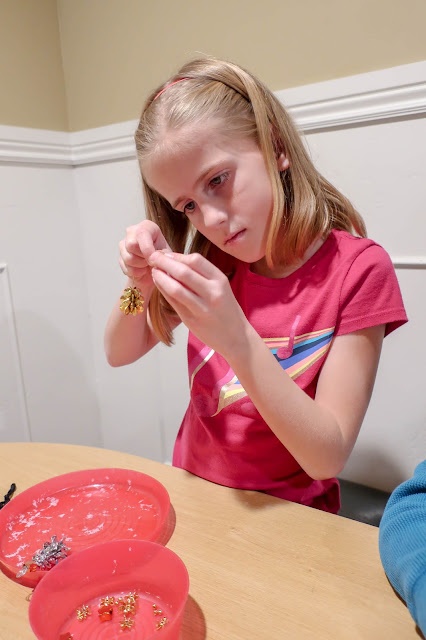 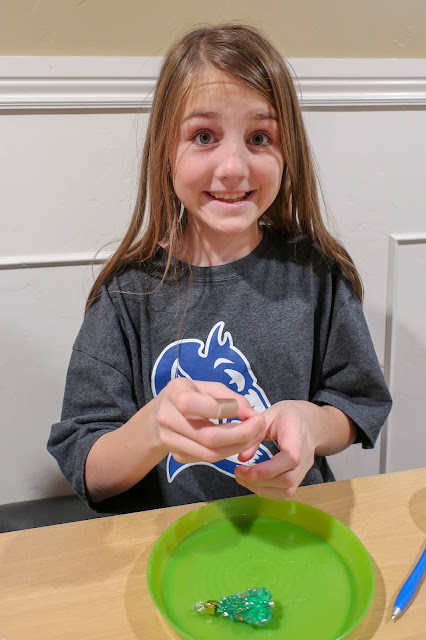 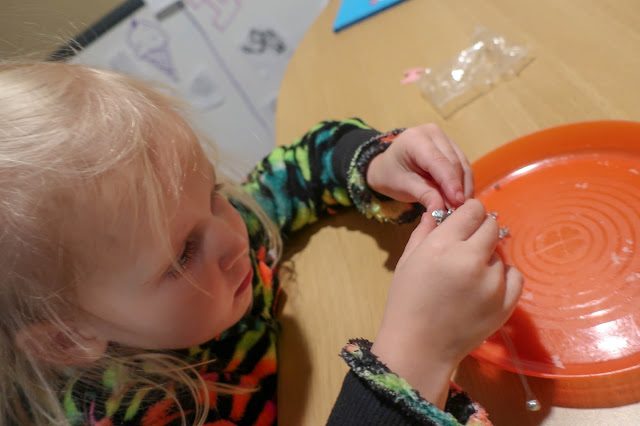 And some finished products: 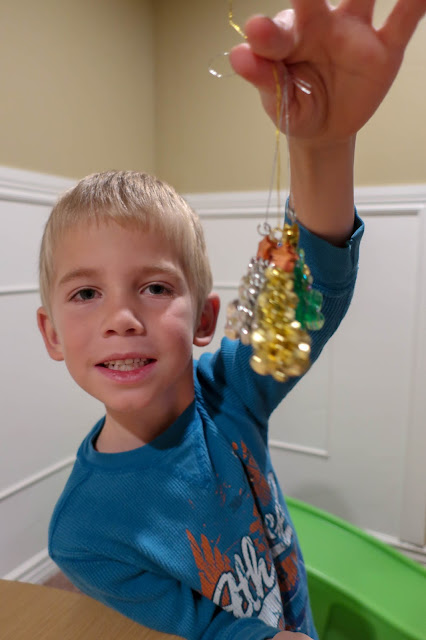 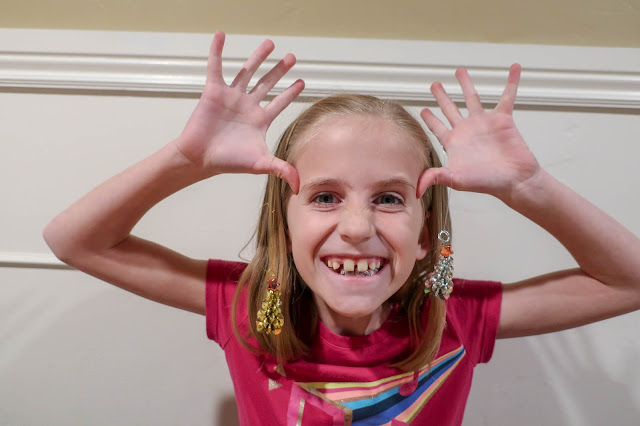 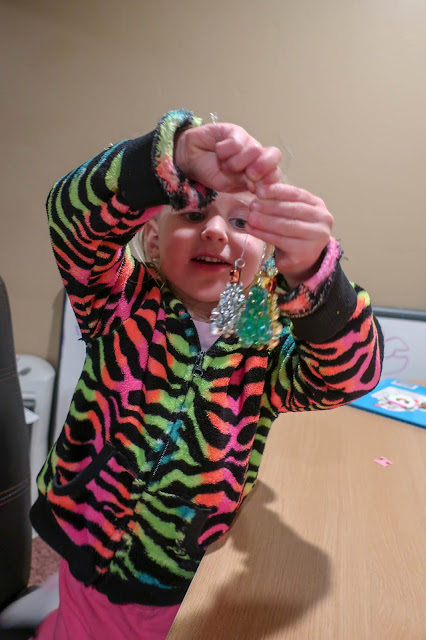 Some the children have given away (to friends and teachers) but I think more than a few ended up on our tree.
Posted by Nancy at 12:50 AM