Last night we went out for dinner as a family (the kids all brought home coupons for free kids meals), making it our second annual eat-at-Brick-Oven-and-then-visit-Riverwoods-for-Christmas-lights outing. We're just that good at traditions.*

Alexander was getting so hungry that he started eating crayons. 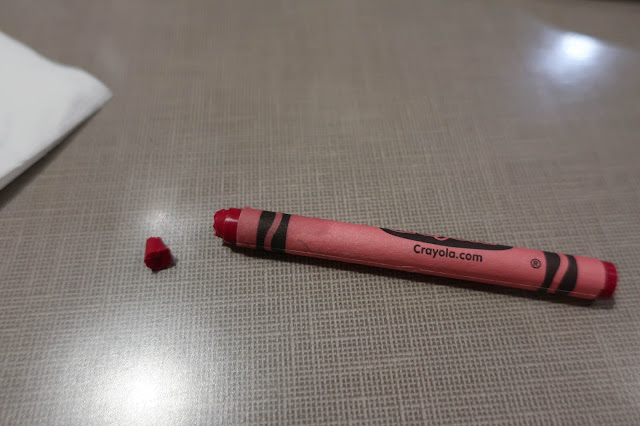 He was rather relieved when we finally convinced one of his siblings to offer him a crust from their pizza: 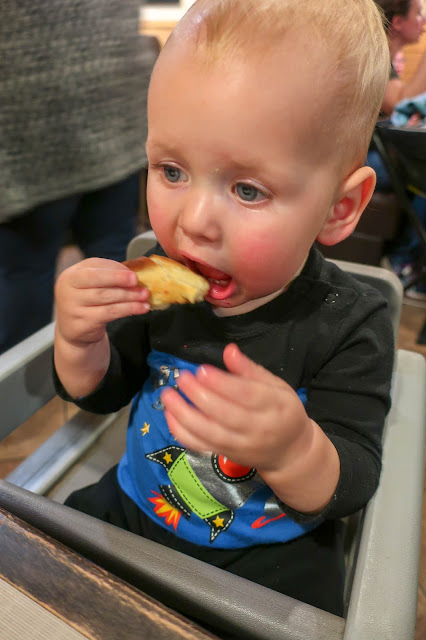 Here are our happy children filling their bellies: 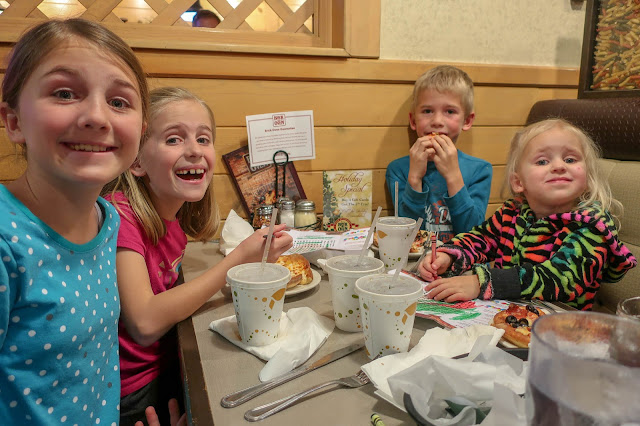 And this is how Andrew feels about waiting this long for pizza (because, honestly, we could have stayed home and made pizza from scratch by ourselves in the amount of time we waited at a restaurant that has all the ingredients prepped and the oven preheated, just saying): 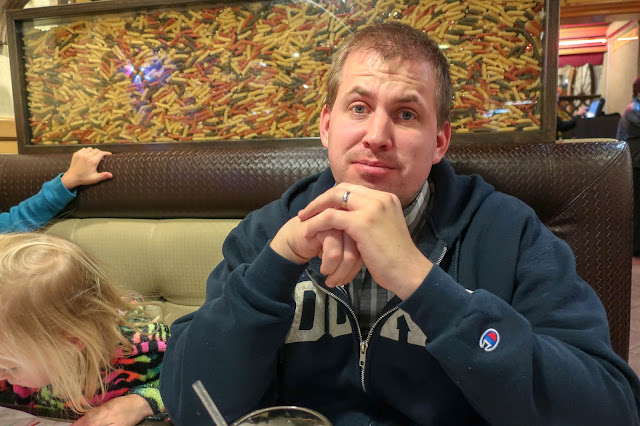 We made it to Riverwoods around 7:30 and managed to both visit Santa and ride the carousel (which was the fun activity of the year (they seem to change that up)). The line for Santa was short and the evening was relatively warm (compared to other years we've been to Riverwoods). Here's Benjamin and Zoë standing by a big nutcracker: 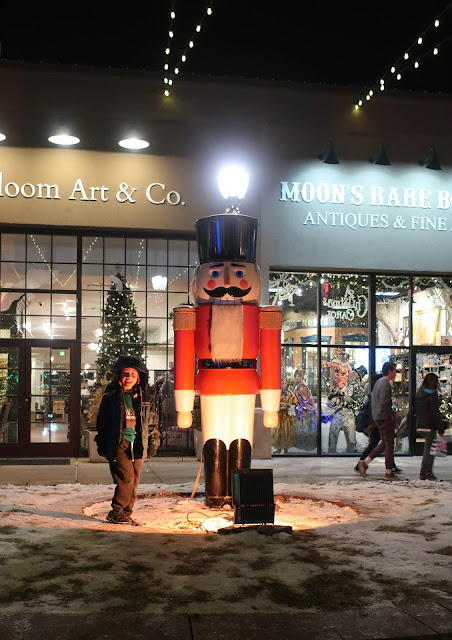 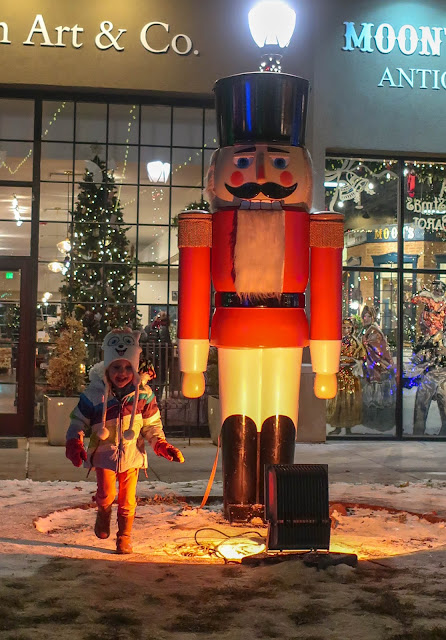 Zoë was completely entranced. She was skipping about the entire time and kept pointing things out to me in wonder and awe.

"Do you hear that music, Momma? That's a Christmas song!"

"Look at those lights over there!"

"Look at this big drum!"

We had been going to skip Santa in favour of the carousel (because our kids aren't big on strangers and we figured a carousel would be much more fun) but because the line was so short and she was so excited we decided we had to stop. If we missed the carousel (we had an 8:00 deadline) we could always come back another day.

Here's Miriam sneaking out of line to stand by a toy soldier: 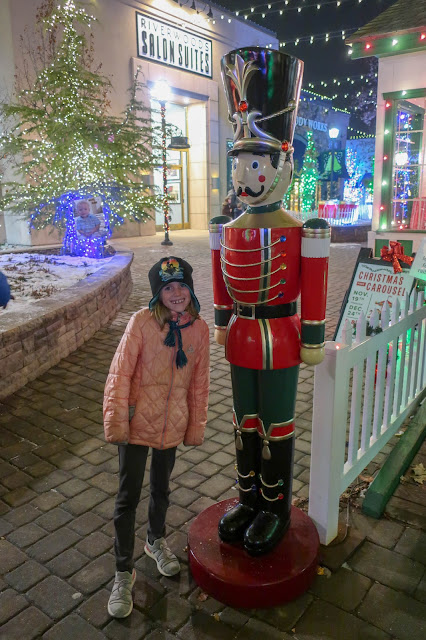 And this was about how long the line was, so not too shabby at all: 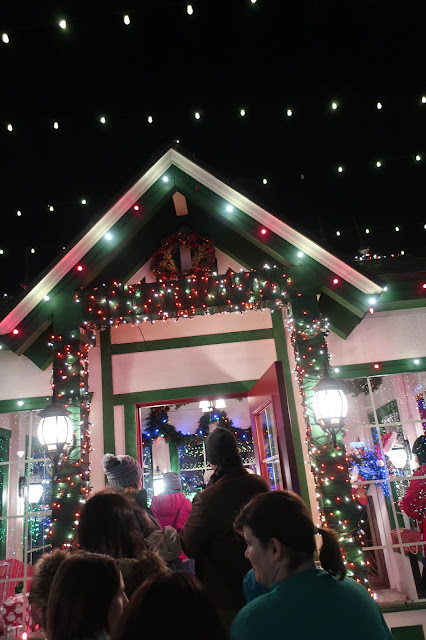 A few more pictures of our wait... 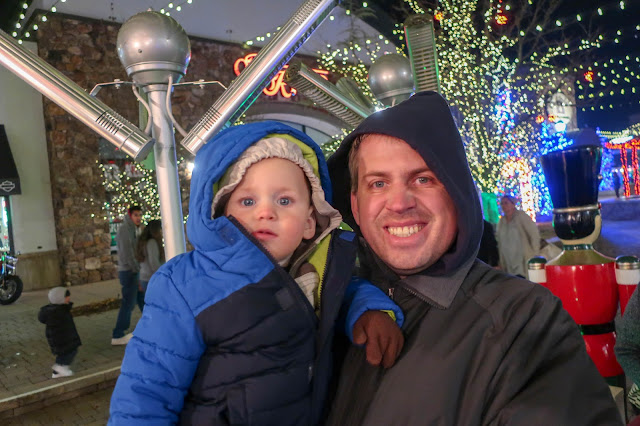 Side note, Rachel's tooth has been so grotesquely wiggly. It's been hanging on by a thread and flutters in and out while she speaks and is just...so gross. But she finally yanked it out today, so we're happy it's gone! Enjoy her snaggle-tooth picture: 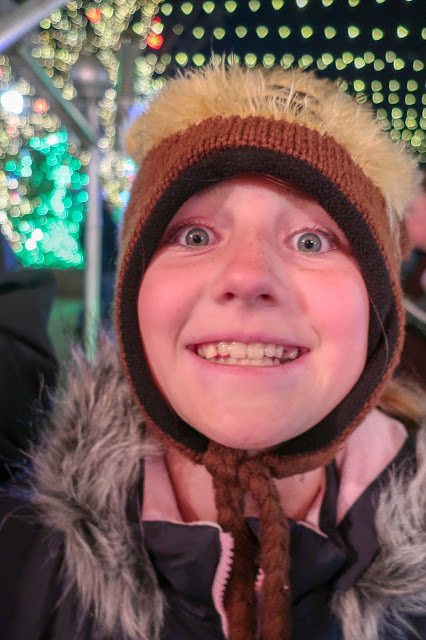 Here are all our sweet kids by Santa: 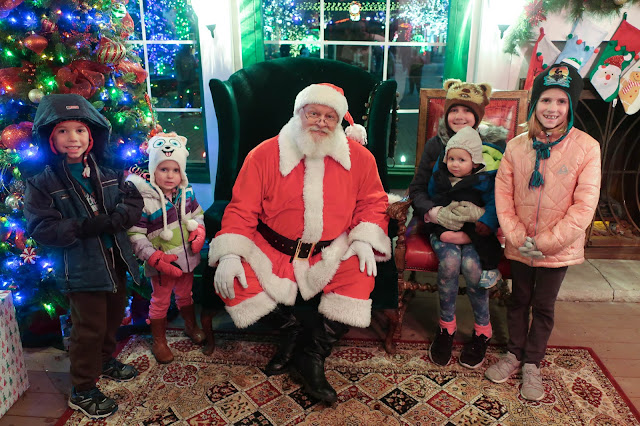 He asked them what they wanted for Christmas and they all just stared him down.

"I don't think they've decided yet," I hedged for them.

"How about you write me a letter," Santa suggested, so we said that we would do that and then left to find the carousel. It was inside the Provo Surf establishment, which is a huge complex of "fun" things like arcade games and fair rides and, yes, a surfing area. They had their carousel open and there was no line so we just waltzed right up and took turns having a go (I guess there was a line once we got there because there was only room for Rachel and Miriam to hop on the first time, which meant the other three kids had to wait). 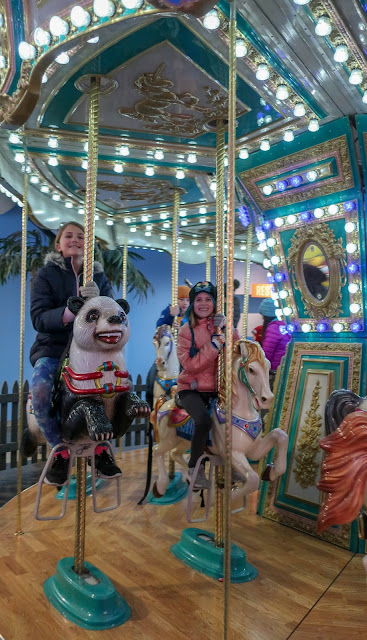 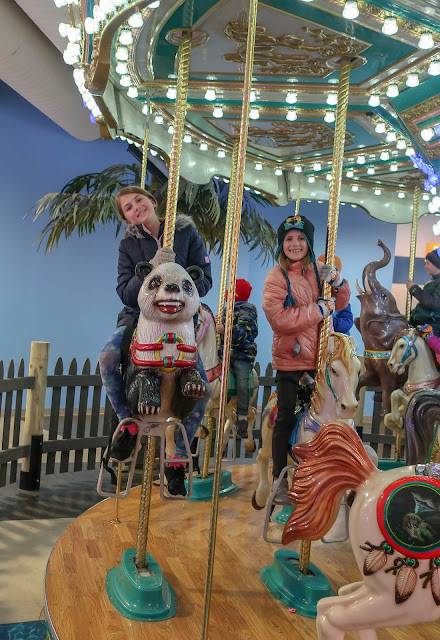 And here are some pictures of me riding with Alexander, Benjamin, and Zoë:

And here's our attempt at a group picture in front of this tree-thing again (because tradition): 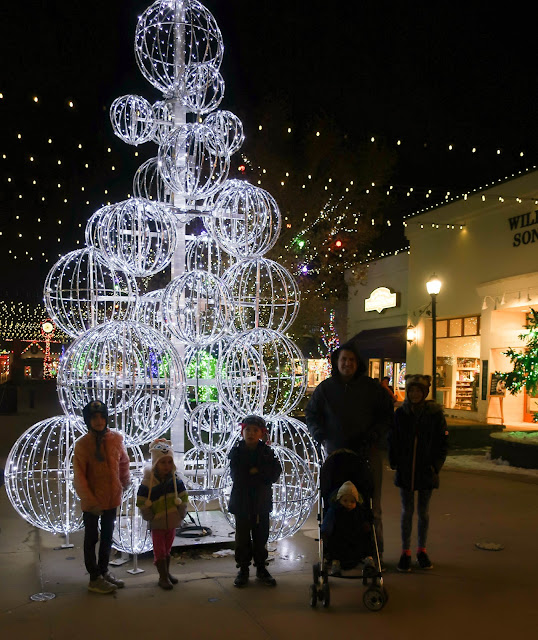 And that was our quick (at least compared our long dinner)**** visit to the Riverwoods.

We've been fairly consistent with our Christmas Riverwood visits over the past eight years. We went in 2010 & 2011 (while living in Utah for Andrew's MPA), 2014 (while visiting Utah from North Carolina), and 2017 & 2018 (while living here for Andrew's visiting assistant professorship at BYU).

We might change our tradition up for next year (at any rate we will probably cut out Brick Oven because they haven't been the best experience the last couple of times we went), but that's okay because traditions require tweaking as family dynamics shift.

* Except last year we didn't finish eating at Brick Oven until we were too late to visit with Santa and we had to come back the next day. Oi.

** Perhaps eating at Brick Oven is not the best idea for us. Or perhaps we're just not as good at traditions as we think we are.

*** We tend to clump Rachel and Miriam together as one unit—The Girls. And then there was Benjamin. Zoë complicated this distinction but she hasn't ever complained about it until today. She came into our room this morning and Andrew asked her to tell The Girls to get ready for church. She said, "Okay!" and then she stopped dead in her tracks and said, "But, Daddy, I am a girl!" She still understood that Rachel and Miriam are The Big Girls and she is The Little Girl of the family, but it was cute that she was suddenly so concerned about having to rework titles so that she was not unjustly excluded from the definition.

**** We joked that our long wait for pizza was "the story of our lives." Patience pays off but waiting...is hard.
Posted by Nancy at 1:28 AM