I mostly finished this poem and then sat and waited, wondering whether or not we'd hear back from Georgia (or Italy, but that's another story) in time to include it in the newsletter. Finally we decided to publish it without knowing (after all, we've ended every other poem with a big ol' question mark about our future) but as soon as we'd decided that we got the call from Georgia offering us a position!

So then I decided to work it into the newsletter after all, which meant I had to wait another week while the offer was finalized. Andrew signed all the paperwork yesterday so it's officially official—we'll be moving to Georgia next year (after we finish up the school year here)!

Hold onto your hats, folks, because this poem ended up being significantly longer than in years past. It's been a doozy of a year, though, so that's completely justifiable (right?).

You can download the full-size version here, or read the text below the jump: 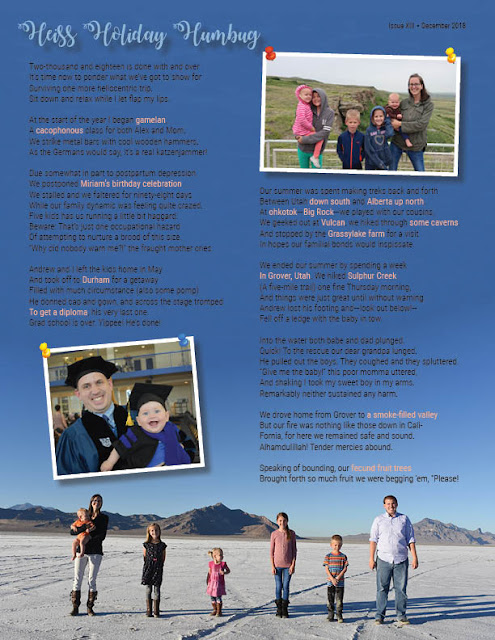 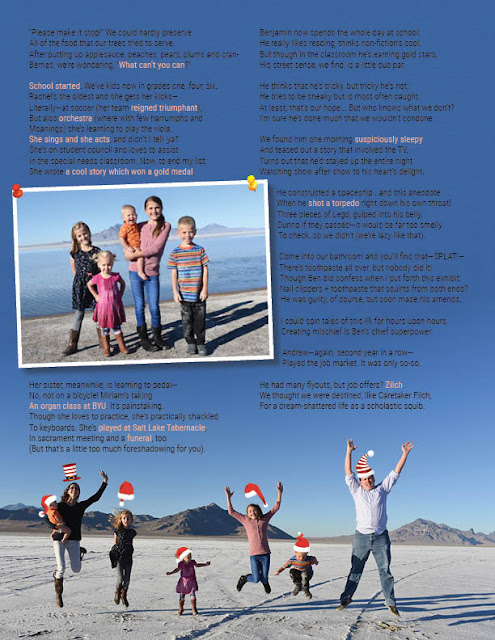 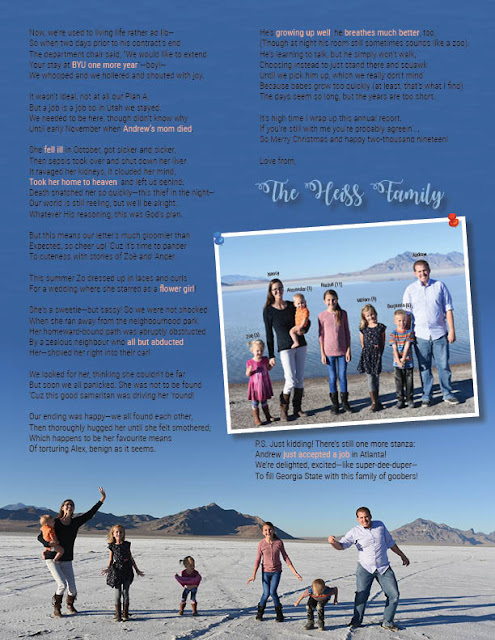 Two-thousand and eighteen is done with and over
It’s time now to ponder what we’ve got to show for
Surviving one more heliocentric trip.
Sit down and relax while I let flap my lips.

At the start of the year I began gamelan,
A cacophonous class for both Alex and Mom.
We strike metal bars with cool wooden hammers.
As the Germans would say, it’s a real katzenjammer!

Due somewhat in part to postpartum depression
We postponed Miriam’s birthday celebration.
We stalled and we faltered for ninety-eight days
While our family dynamic was feeling quite crazed.
Five kids has us running a little bit haggard.
Beware: That’s just one occupational hazard
Of attempting to nurture a brood of this size.
“Why did nobody warn me?!” the fraught mother cries.

Andrew and I left the kids home in May
And took off to Durham for a getaway
Filled with much circumstance (also some pomp).
He donned cap and gown, and across the stage tromped
To get a diploma, his very last one.
Grad school is over. Yippee! He’s done!

Our summer was spent making treks back and forth
Between Utah down south and Alberta up north.
At ohkotok—Big Rock—we played with our cousins,
We geeked out at Vulcan, we hiked through some caverns,
And stopped by the Grassylake farm for a visit
In hopes our familial bonds would inspissate.

We ended our summer by spending a week
In Grover, Utah. We hiked Sulphur Creek
(A five-mile trail) one fine Thursday morning,
And things were just great until without warning
Andrew lost his footing and—look out below!—
Fell off a ledge with the baby in tow.

Into the water both babe and dad plunged.
Quick! To the rescue our dear grandpa lunged.
He pulled out the boys. They coughed and they spluttered.
“Give me the baby!” this poor momma uttered,
And shaking I took my sweet boy in my arms.
Remarkably neither sustained any harm.

We drove home from Grover to a smoke-filled valley
But our fire was nothing like those down in Cali-
Fornia, for here we remained safe and sound.
Alhamdulillah! Tender mercies abound.

Speaking of bounding, our fecund fruit trees
Brought forth so much fruit we were begging ‘em, “Please!
“Please make it stop!” We could hardly preserve
All of the food that our trees tried to serve.
After putting up applesauce, peaches, pears, plums and cran-
Berries, we’re wondering, “What can’t you can?”

School started. We’ve kids now in grades one, four, six.
Rachel’s the oldest and she gets her kicks—
Literally—at soccer (her team reigned triumphant),
But also orchestra (where with few harrumphs and
Moanings) she’s learning to play the viola.
She sings and she acts, and didn’t I tell ‘ya?
She’s on student council and loves to assist
In the special needs classroom. Now, to end my list:
She wrote a cool story which won a gold medal.

Her sister, meanwhile, is learning to pedal—
No, not on a bicycle! Miriam’s taking
An organ class at BYU. It’s painstaking.
Though she loves to practice, she’s practically shackled
To keyboards. She’s played at Salt Lake Tabernacle,
In sacrament meeting and a funeral, too
(But that’s a little too much foreshadowing for you).

Benjamin now spends the whole day at school.
He really likes reading, thinks non-fiction’s cool.
But though in the classroom he’s earning gold stars,
His street sense, we find, is a little sub par.

He thinks that he’s tricky, but tricky he’s not;
He tries to be sneaky but is most often caught.
At least, that’s our hope... But who knows what we don’t?
I’m sure he’s done much that we wouldn’t condone.

We found him one morning suspiciously sleepy
And teased out a story that involved the TV.
Turns out that he’d stayed up the entire night
Watching show after show to his heart’s delight.

He constructed a spaceship...and this anecdote
When he shot a torpedo right down his own throat!
Three pieces of Lego, gulped into his belly.
Dunno if they passed—it would be far too smelly
To check, so we didn’t (we’re lazy like that).

Come into our bathroom and you’ll find that—SPLAT!—
There’s toothpaste all over, but nobody did it!
Though Ben did confess when I put forth this exhibit:
Nail clippers + toothpaste that squirts from both ends?
He was guilty, of course, but soon made his amends.

I could spin tales of this ilk for hours upon hours.
Creating mischief is Ben’s chief superpower.

Andrew—again, second year in a row—
Played the job market. It was only so-so.

He had many flyouts, but job offers? Zilch.
We thought we were destined, like Caretaker Filch,
For a dream-shattered life as a scholastic squib.

Now, we’re used to living life rather ad lib—
So when two days prior to his contract’s end
The department chair said, “We would like to extend
Your stay at BYU one more year”—boy!—
We whooped and we hollered and shouted with joy.

It wasn’t ideal, not at all our Plan A,
But a job is a job so in Utah we stayed.
We needed to be here, though didn’t know why
Until early November when Andrew’s mom died.

She fell ill in October, got sicker and sicker,
Then sepsis took over and shut down her liver.
It ravaged her kidneys, it clouded her mind,
Took her home to heaven, and left us behind.
Death snatched her so quickly—this thief in the night—
Our world is still reeling, but we’ll be alright.
Whatever His reasoning, this was God’s plan.

But this means our letter’s much gloomier than
Expected, so cheer up! ‘Cuz it’s time to pander
To cuteness with stories of Zoë and ‘Ander.

This summer Zo dressed up in laces and curls
For a wedding where she starred as a flower girl!

She’s a sweetie—but sassy! So we were not shocked
When she ran away from the neighbourhood park.
Her homeward-bound path was abruptly obstructed
By a zealous neighbour who all but abducted
Her—shoved her right into their car!

We looked for her, thinking she couldn’t be far
But soon we all panicked. She was not to be found
‘Cuz this good samaritan was driving her ‘round!

Our ending was happy—we all found each other,
Then thoroughly hugged her until she felt smothered;
Which happens to be her favourite means
Of torturing Alex, benign as it seems.

He’s growing up well, he breathes much better, too,
(Though at night his room still sometimes sounds like a zoo).
He’s learning to talk, but he simply won’t walk,
Choosing instead to just stand there and squawk
Until we pick him up, which we really don’t mind
Because babes grow too quickly (at least, that’s what I find).
The days seem so long, but the years are too short.

It’s high time I wrap up this annual report.
If you’re still with me you’re probably agreein’...
So Merry Christmas and happy two-thousand nineteen!