Benjamin has been very interested in constructing things lately. He loves going over to Aunt Linda and Uncle Trevor's house to play in their garage with tools. They had him working on some project or another recently (it's a secret, however, so I don't know what it is). Linda suggested that we take him to one of the building days at Home Depot, but they're all the way in Provo at 9:00 in the morning on Saturdays and, well, we're too tired for something like that. Instead Andrew took Benjamin to Lowe's and let him choose a little kit to build.

I finally helped Benjamin put it together on Friday (the kids didn't have school). He enjoyed figuring out the instructions and hammering all the nails into place. 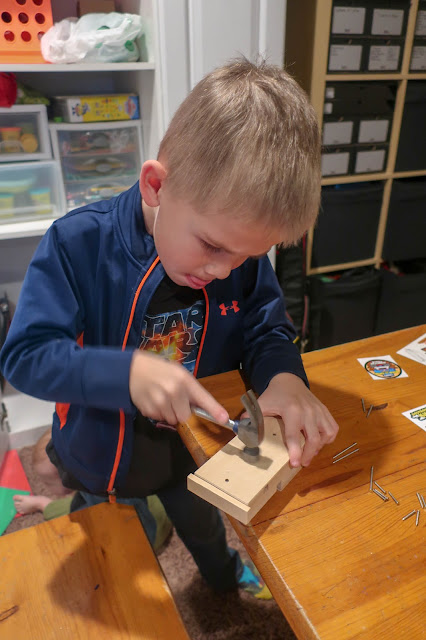 I enjoyed reminding him to pay attention to what his hands were doing... 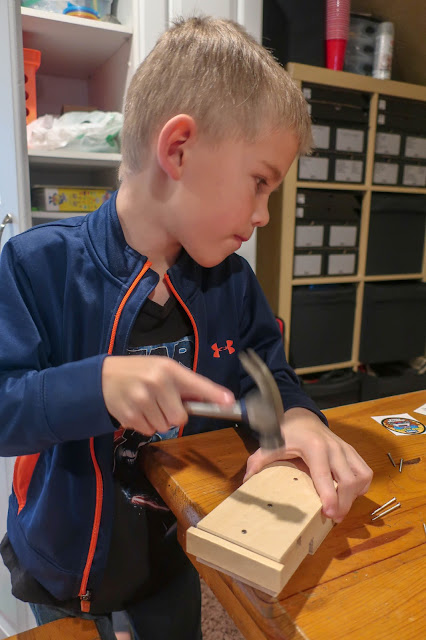 In the end he had a beautiful monster truck, which he got to decorate with some stickers that had come with his kit. And then because it was a fairly warm day outside, he and Zoë went out to play monster trucks in the backyard (Zoë took out a wooden car that Grandpa Frank had made for one of the kids some time ago). 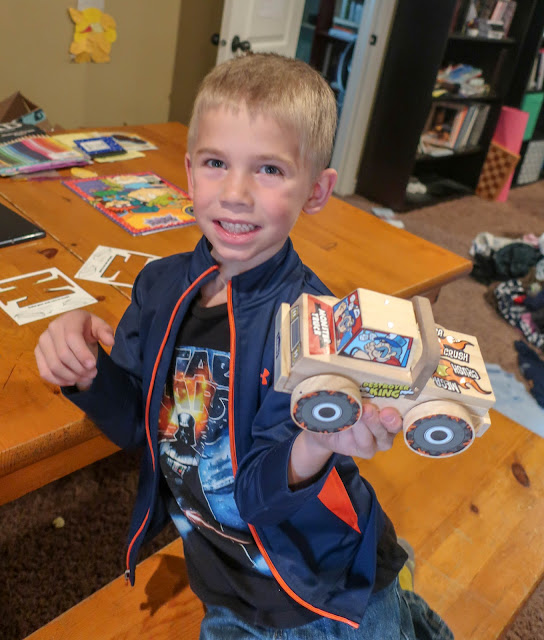 It was fun to get some one-on-one time with my little builder, even with his other siblings orbiting around us the whole time. That might have been more effective one-on-one time, however, because he got to proudly announce, "This is my project. You can watch but you can't touch."

He is convinced he's going to be a mountain man when he grows up and asked for :


This is all so that he can build himself a cabin on the mountain. We got him some Lincoln Logs (used, from FB marketplace, because I didn't want to commit to something I wasn't sure he was going to play with much (even though he loves playing with Lincoln Logs when we visit my friend April's playroom)) for Christmas, which I think he's played with once so far. But I suppose Lincoln Logs aren't as fun as a real cabin.

On Wednesday he and Zoë had a fight over college, which is a very popular game at our house.

"I'm not going to college!" I heard him bellow.

"Well, you have to go to college when you grow up!" Zoë retorted.

This went back and forth for a little while until he stormed up the stairs to drag me into the fray.

"You might end up wanting to go to college, anyway," I hedged.

"Perhaps a trade school, then," I suggested, "Where you could learn plumbing or..."

"Mountain men don't use toilets!" he interrupted. "All they need is a hole in the ground!"

I've since convinced him that it might be a good idea to take a few survivalist courses or something—for example, my cousin Heather took a dog-sledding course at BYU-Idaho and Uncle Morgan has taken several of-interest-to-Benjamin courses, including one on foraging (or native plants, but also knowing which ones are edible, so foraging)—because those really aren't skills he's going to pick up from his parents and he should probably have some sort of knowledge before heading off into the mountains alone.

Zoë doesn't want him to go. She will miss him. She asked if she could come with him.

"Then marry me!" Zoë pleaded.

"Zoë," Benjamin said, rolling his eyes. "We can't get married!"

Also, y'all are siblings...but the annoying part is clearly the bigger hurdle in this hypothetical arrangement.

At least I have a good 12 years left before he leaves me for the mountain. Maybe by then he'll decide on a different occupation (goodness knows he's been obsessed with a long list of things before his recent decision to become a mountain man).
Posted by Nancy at 11:32 PM