Panes and pains (and glaze)

I just finished glazing my first full 8/9 of 1/2 of one of our windows!

Yes, in the dark, alone, after the kids were in bed. I wasn't quite alone, of course. I had plenty of critters to keep me company: every beetle and moth for a square mile, for instance, came flocking to watch me work, along with about a metric tonne of mosquitoes. The frogs chatted to me ceaselessly and I heard a few animals scampering around in the trees behind me. Nothing really bothered me, per se, until I heard some scampering coming from directly beneath my feet. Something was ambling along under the porch. And it wasn't a small something, either.

I turned on the shop vac to see if I could frighten it into revealing its identity, but the creature just continued shuffling along, completely unfazed. As it approached the edge of the deck, I peeped over the railing to see what I might see—a raccoon, a bear, a deer, a coyote?!

It was a possum.

It didn't even look at me. It just kept on walking.

But, I finished the window (well, 8/9 of 1/2 of the window) and it's a thing of (messy) beauty (we'll get those fingerprints taken care of eventually). This is the inside of the window so you can't see my beautiful glazing job but that's part of the beauty of the glazing job—that you can't see it from the inside! This picture is more is to show you our lovely cereal box panel. 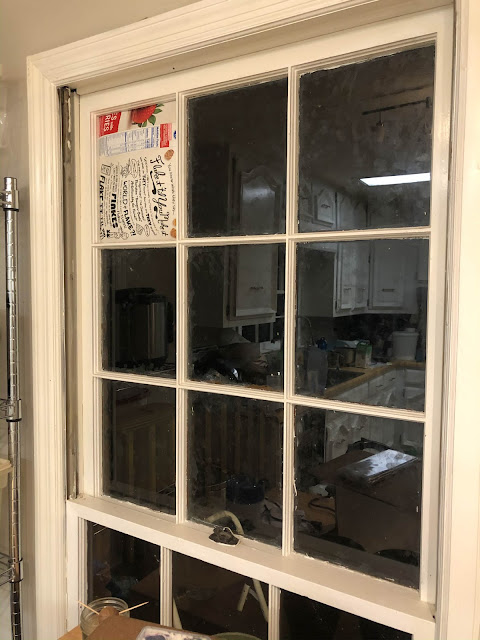 It's our last week of school before summer break (and Rachel's last week of school before finals) so we're tying up a bunch of loose ends: finishing our COVID-19 quarantine time capsule journal thingies, filling up our observation journals/field guides, and feverishly working to finish half of next year's math curriculum (if you're Miriam), or trying to do as little review math as possible (if you're Benjamin). We also have a few fun projects for the kids to do this week: an author biography (they're terribly excited about this), some STEM challenges with Lego, and some artistic endeavors as well. Anyway, after I got the kids settled into their schoolwork, I started working on this window again and it was slow going.

Some of the old glazing flakes right off. Some of it is hard as a rock and has to be chipped away. Some of it is still kind of rubbery and has to be peeled away. It was taking me forever and I skinned several of my knuckles trying to get the job done. When I came inside for a bandaid for a particularly bad scratch (as well as some work gloves because I finally got smart), I remarked that "getting these panes out sure is a pain!"

Andrew was in the kitchen cutting himself a piece of fresh bread. 'There's a French joke in here somewhere," he said.

"Getting these panes out is a pain but I eat pain for breakfast," I said in my toughest-sound French accent.

Then he decided to give me a hand for a minute. I'd been working on the windows with only a putty knife and, as I mentioned, it was slow-going.

"Why don't you try a chisel?" he asked. "Just, like, one of the small chisels. Gently tap it with the little hammer. That should do the trick."

"It sounds like a terrible idea," I said. "Hammers and windows don't really go together."

We fetched the chisel and hammer and it, uh, turns out that's a terrible idea. Andrew cracked the glass while showing me how to position it just so to keep the glass in tact. So we quickly dropped that method (and Andrew is currently researching replacement panes (we have a number that have needed to be replaced since we moved in, anyway)).

I went to ask the internet about how to remove particularly stubborn glazing and my friend over at "The Craftsman Blog" informed me that a chisel is an appropriate tool for removing glazing (a hammer, however, is not (also, full disclosure: he's not really my friend but I've watched so many of his videos over the past few days that it's not even funny)). You just slide the chisel between the glazing and the pane until it starts coming off in chunks and it worked just like he said and I should have done more research on removing the old glazing before I began, but...it's fine.

The kids had come outside for some play time—jumping and swinging and reading and running and things like that—which also meant they were buzzing around my little step ladder with verifiable interest. "What are you doing? What are you doing now? Can I help? Can I touch this? Watch this! Can I hold this? Can I stand up there with you? Can you get me a snack?"

For the most part things were going fine. I was fielding questions left and right while steadily chipping away at that glazing. And then Alexander walked up to my work station.

"I'm going to help Mommy," he announced, picking up the fateful hammer that Andrew had used to break a pane of glass only an hour or so before (we hadn't gotten around to putting it away yet) and swinging it into the window.

"Alex, NO!" I screamed from the step ladder, only a moment too late.

The hammer connected with the window with a sickening crack—but it didn't break (Alexander swings like a two-year-old), thank goodness—and then Alexander dropped it and froze. He does not like getting into trouble and not only had Mommy said "no" to him, she had yelled it (rather frantically). He stood like this for a good five minutes before we convinced him the world was still spinning (and that hammers and windows don't go together, a lesson one can never learn too young). 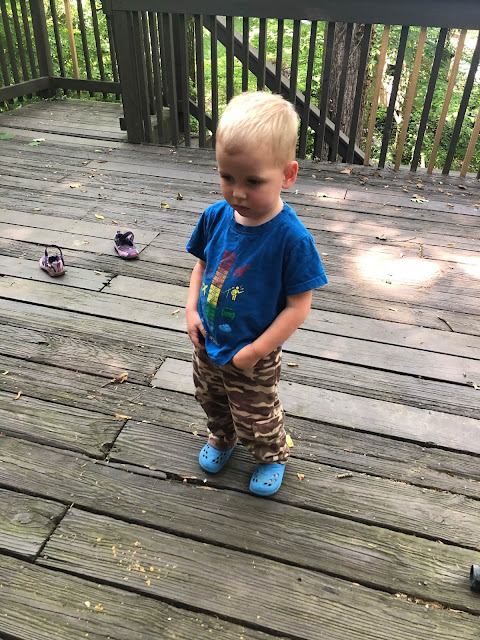 I settled him onto the porch swing with Zoë and Miriam for a little story time, which made working on the windows much easier for me (thank goodness for older kids). 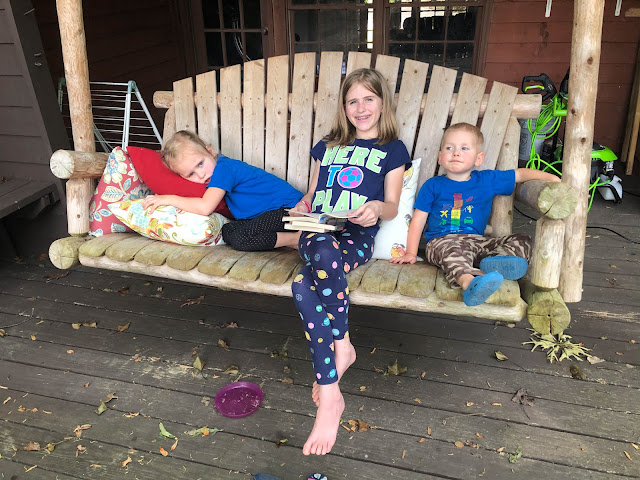 I was still not done with the windows at dinner time (obviously, since I didn't finish until after bedtime) and towards the end of dinner we were talking about our plans for the rest of the evening.

"We need to do dinner jobs, go on a family walk, have family home evening, and then," he said, pointing to me, "We glaze."

Rachel had made a coffee cake (no coffee in it; simply a cake intended to be eaten with coffee (not that we did)) which she needed to make a glaze for, so she asked, "Shouldn't we do the glaze before the walk?"

"It will take too long to finish right now," I said. "We want to get a walk in before bedtime.* So we'll walk first, do family night, put the kids to bed, and then finish glazing. I know I already started, but it should be fine. It takes like two weeks to get a good crust on it so it's not like there's any rush right now." 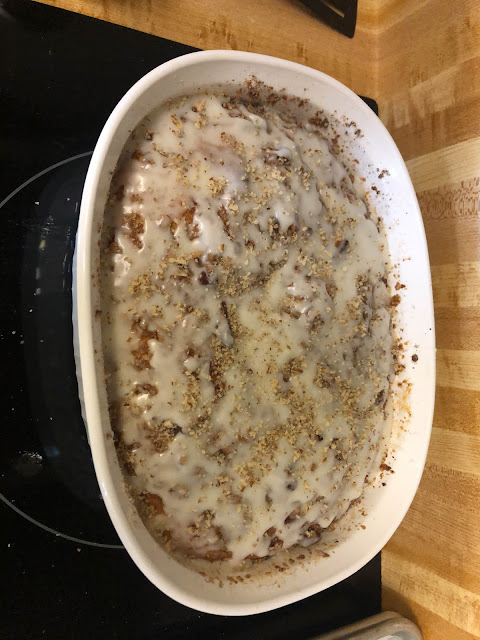 And if we keep working at this pace we should be finished with our windows by sometime in 2022.