We've officially lived in our house for a year now—366 days (as our friend James pointed out when Andrew erroneously claimed 365 days (that would have been yesterday)) because it was a leap year!
Of those 366 days, we have spent 112 of those days being very much at home due to the coronavirus. That's about 30% of our time in Georgia, spent right here...at home. So that's fun.
We moved here and attended our ward for a couple of weeks before it split off into a brand new ward and we enjoyed that ward for a several months until we were peeled off and tacked onto another stake. We met as our new ward in our new state for one week before church was cancelled (well, not cancelled so much as moved to our home). It's been weird.
But Rachel got to "attend" the virtual camp "with" her friends from our old stake last month and this month she gets to "attend" our new stake's virtual camp "with" a bunch of girls she has never seen in her life. That will probably be really weird.
Anyway, in honour of being in our home for a full year I hung Happy and Top over the kitchen sink where they can keep our dish-doers company (yes, we're still deciding where things go). My mom texted me to say that she thought Alexander would probably enjoy looking at those birdies and he was quite happy about their addition to the kitchen. 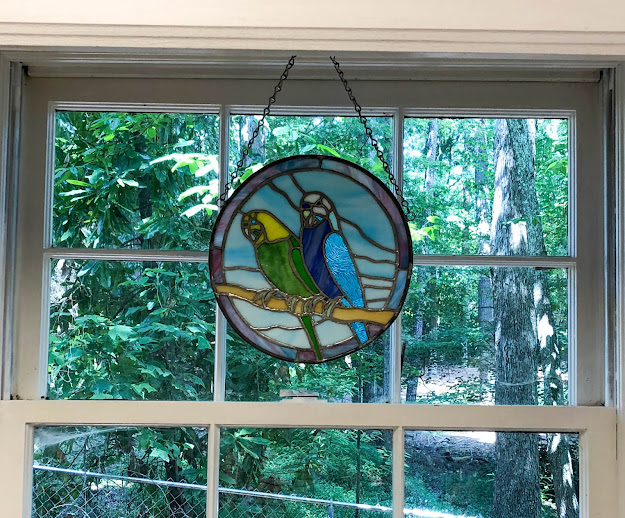 Here he is happily chirping and flitting around the kitchen while emptying the dishwasher this morning: 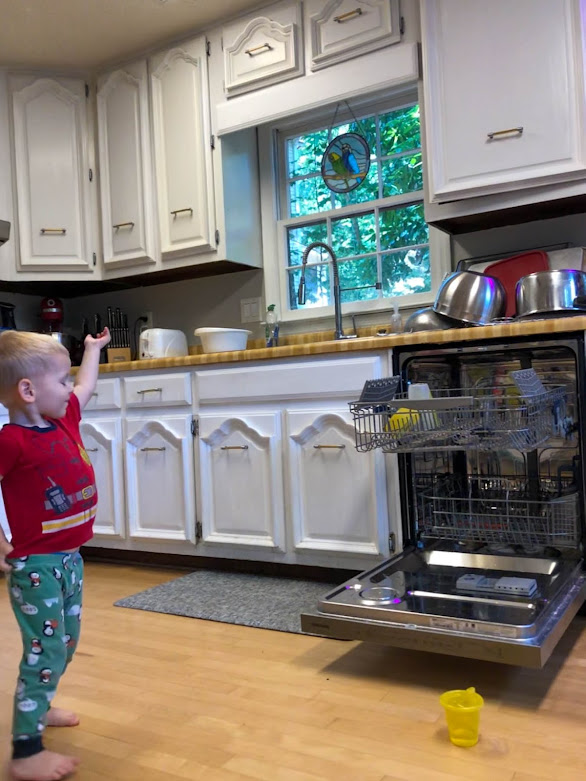 We were also rather excited to watch Hamilton today! They couldn't have picked a better day to release it. I gather that it probably had more to do with the fact that tomorrow is Independence Day but we like to believe Lin Manuel Miranda had us personally in mind when the date was picked (even though we don't quite know who did the picking—all we know is that it wasn't supposed to come out until next year but all of a sudden it was released today (we've been counting down for a while so I suppose it's not "all of a sudden," but still)). We just know he wanted to help us celebrate our Georgia-versary!
Our day was filled with homeschooling, which kept us fairly busy. Rachel wanted to make celebratory cookies for dessert, so she started on those in the afternoon. She had Very Big Plans that involved a stencil of the Hamilton logo and all sorts of things but...things didn't turn out very well. 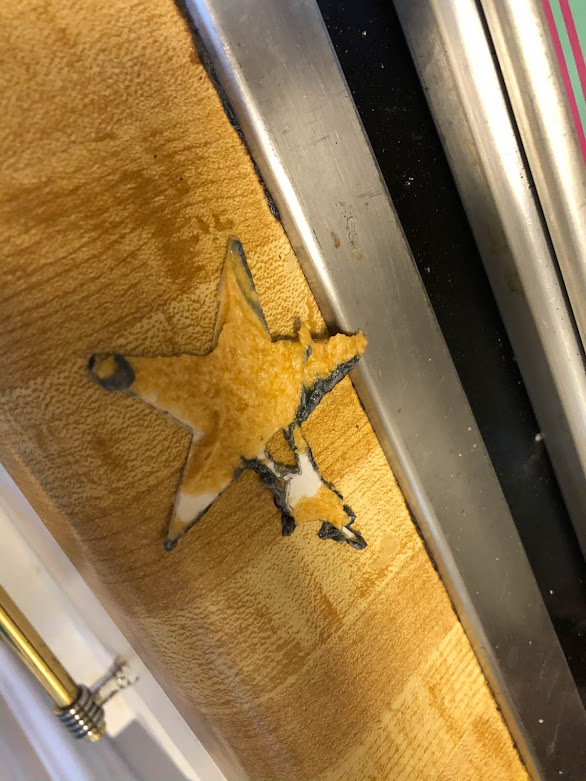 She made the cookies and icing before the movie started, but then decided she'd ice them during intermission (because we had to get started on dinner/movie right away or we'd run into bedtime issues). She didn't want to put the icing into the fridge because it would be too cold to use so she left it sitting on the counter and it had separated due to the heat/humidity. I suppose she should have whipped it again, but she didn't ask for guidance. She simply tried to use it. And it did not go well.
So instead we ended up with cookies like this: 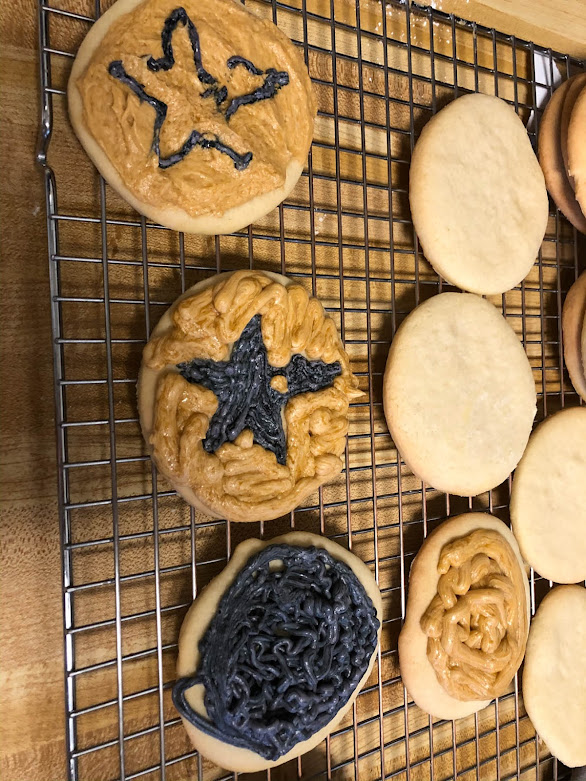 Very festive, no? This one is supposed to say "oops": 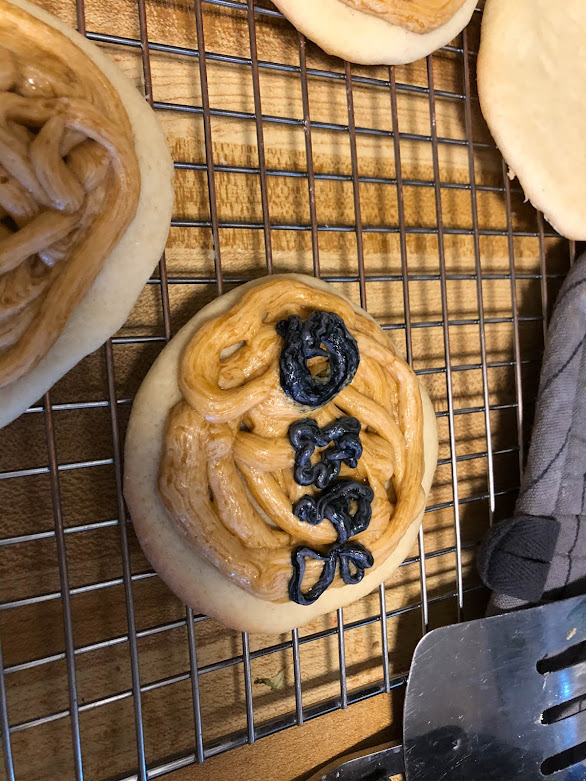 But no matter. She was bound to have a "cake fail" (or, in this case, a "cookie fail") eventually. We can't all be amazing all the time. 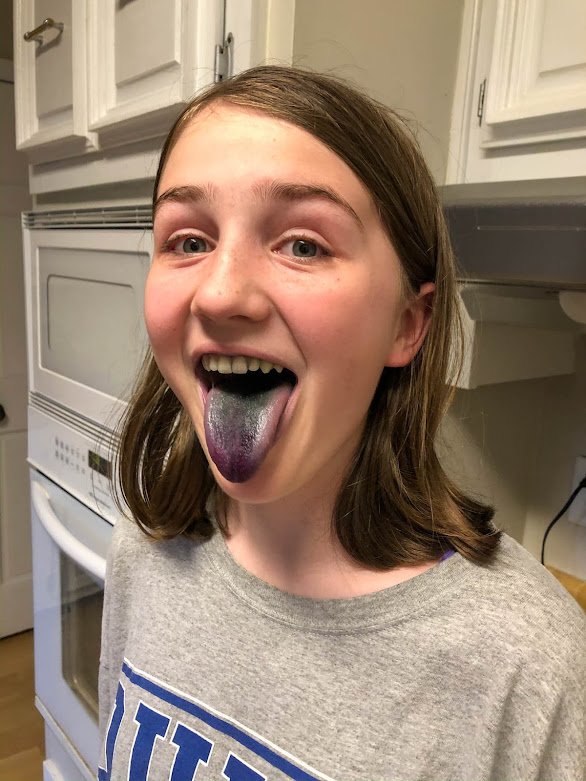 The other day our sweet cousin Gavin told Auntie Em, "Sugar cookies are my favorite...because of the sugar." And, to be fair, he's not wrong. The cookies still tasted yummy, even if she didn't quite achieve her aesthetic ideal.
Watching Hamilton was an interesting family experience. The three older kids basically have the show memorized. Benjamin spent his toddlerhood pouring over our big Hamilton book, dreaming about being a costume designer. We didn't ever get to see the show on Broadway (alas), but watching it at home was still thrilling. Zoë and Alexander (whose namesake is kind of the musical (but also kind of not)) are a little less familiar with the show. Though they have listened to the soundtrack several times, they didn't live and breathe the soundtrack like their older siblings did a few years ago.
Alexander was too little to appreciate much (except for a sick beat—that kid was dancing around like nobody's business) and Zoë understood quite a lot but also needed a lot of clarification. The girl had questions.
A friend mentioned that this might contain spoilers. Y'all've had a good 200+ years to hear about the plot, though, so I'm not sure how many spoilers I can actually spoil. Spoiler: everyone dies (...eventually). Consider this your spoiler alert.
I didn't have anything to take notes with the first half of the movie, so these questions aren't in order but I give them to you, anyway, as a sampling of her curiosity:
I grabbed my phone for the second half so that I could record her thoughts sequentially (and more verbatim). Please note that I definitely did not write down everything she said. Her mouth was going the whole time, her eyes were wide, she was singing along to the parts that she knew. This girl was drinking. it. in.
It was fun to share it with them but I'm looking forward to watching it again...without having a toddler bouncing all over me and a five-year-old yacking my ear off. I told Andrew, "You had a much different viewing experience than I did."
He was over on one corner of the couch with Benjamin and Miriam. They, all three, claimed to not have been brought to tears. Rachel and I were juggling the babies (we still lump Zoë in with "the babies," but she's probably getting a little too old for that), however,  and we still managed to turn into blubbering cry-babies at all the right moments.
Anyway, it was just a wonderful way to ring in the new year of our, uh, Georgian calendar.
Posted by Nancy at 1:00 AM