Morgenmuffeln and a wild family devotional

Zoë was on a bit of a fairytale kick today (which morphed into a Disney kick). She got up and read Rapunzel to herself and for one of her many writing assignments (most of which she assigned to herself) she wrote a poem about Rapunzel from the point of view of the witch and drew a lovely picture to go along with it. We let her watch Rapunzel later in the day and then she found all of her Disney princess toys and carted them around the rest of the day, calling them her children.

When Andrew called everyone for scriptures and prayer, Zoë lugged all her many children down the stairs and set them up on the couch with their own set of scriptures. 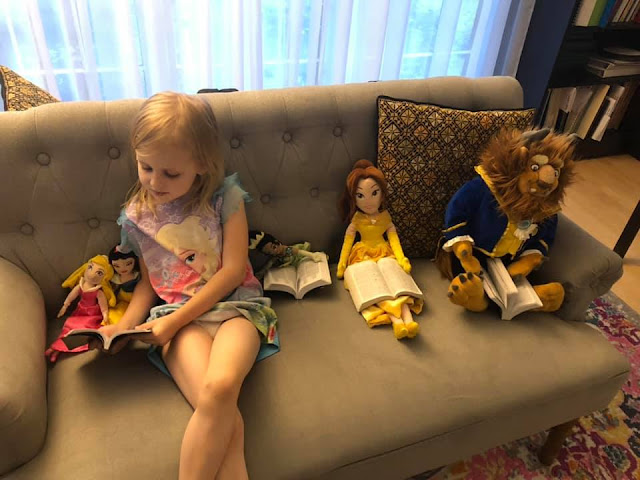 Andrew told her it wasn't fair for her to take up so much sitting real estate in the living room, but in the end she won the argument because she was only taking up a little bit of the couch. It's not her fault she has so many children who wanted to sit with her!

Her argument wasn't really all that strong, but Andrew decided it wasn't a battle worth fighting. Everyone else had found alternative places to sit and Zoë was happy and ready to participate. Sometimes it's best to let a happy Zoë be.

My mom sent me (well, me and my siblings on our family chat) a message this morning that said, "I just learned that there is a word, in German, for a person who is grumpy in the morning and doesn't like to wake up early: Morgenmuffel."*

It made everyone immediately think of Zoë. She can be a Morgenmuffel. But perhaps also a Mittagmuffel. And sometimes even a Nachtmuffel. Every day she's muff-muffelin.' We sure love our little equal-opportunity-muffel.


So she won this battle because she was cute and not screaming at everyone (two very good things). I snapped this picture of her helping some of her littlest readers follow along in their book and posted it to Facebook with the caption, "We had a few guests at our evening scripture study."

Then Andrew showed me how our Alexa had interpreted his little "call to prayer":

Evidently Alexa thought our "guests" were a little more unruly than they actually were!

* While Morgenmuffel translates to "morning grouch," Morgenmuffeln, on the other hand, translates to "morning muffins." Perhaps we should call her our little Morgenmuffeln (instead of a Morgenmuffel) and then when she asks what it means we can tell her it means "precious jewel" (Reid used to called Emily "Lunkers" and when she asked what it meant that is what he told her, but when she got older she looked it up and turns out it means "an exceptional large fish"). When she looks up the meaning we'll be in less hot water because we will have been calling her "muffins" rather than "grump."
Posted by Nancy at 11:16 PM