Let there be light

One of the ballasts in our kitchen lights died recently and the other one was on its way out and refused to turn the lights on about 50% of the time. We decided we'd replace the ballasts, a task we've done before, but when Andrew went to do that he found that these original-to-the-house ballasts had been screwed into the light casing from the wrong side. The only way to get the ballasts out was to remove the entire light fixture so we could unscrew the ballasts from the outside of the light; it should be possible to replace the ballast without taking the light completely out but whoever assembled our house thought they built it so well that nothing would ever need replacing.

Like the blower system in our attic. Guys, I don't know that there's any way to get that old system out of there. And if we can't get it out of there how do we get a new system in there? I mean, I suppose we've survived this long without air conditioning so chances are we could keep on surviving forever.

The A/C guy came today with a part our home warranty company had ordered to try to fix the unit but...it was a literal non-starter. So we're back to the old drawing board (our home warranty company, I imagine would really prefer not to replace our system, which I get, but also I would like a system that...works). Our A/C guy can't stop talking about how sorry he feels for the bloke who has to replace that unit because how will they ever get it down from there? I don't know.

Anyway, here's Andrew working on the lights with Zoë as his helper: 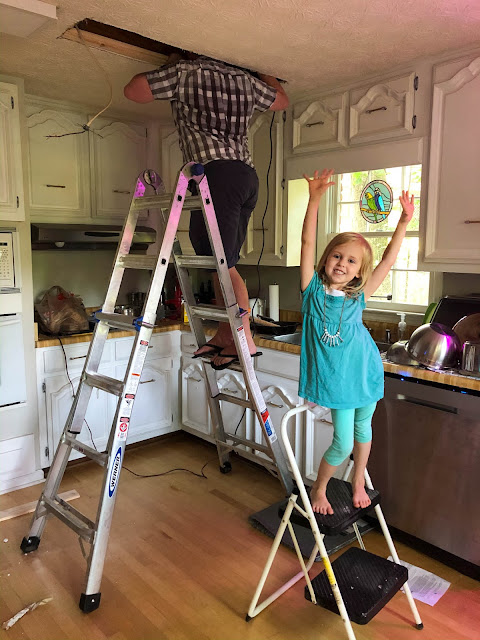 Andrew built a little shelf of sorts to screw the light into on one side, so they're rigged in there a little bit, but that's alright. I'm realizing now that I never took a finished picture, but here's one of Zoë handing Andrew a screw: 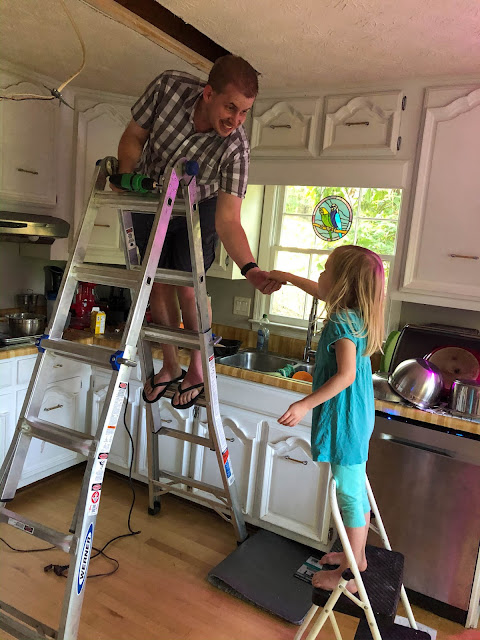 We still have to pretty the holes up a little bit. One day (one day in the very distant future) perhaps we'll retexture our ceilings (my cousin Heather A. recently did it to her fixer-upper home, but she had the luxury of living at her parents' house while fixing up her home...so...that makes it easier than when you have to live in your fixing zone (also, I should note that I just realize that my cousin Heathers that I talk about the very most can now be referred to as Heather A. and Heather B., so that's kind of fun! They used to be Heather L. and Heather T., which is fine...just not quite so mathematical. But Heather A and Heather B? That's just got a very clean look to it, doesn't it?)).

For now we're just grateful that we have light in the kitchen again. And that we might be getting closer to finding a solution to fix our air conditioning (it's possible).

Here's our beautiful ballast from 1982: 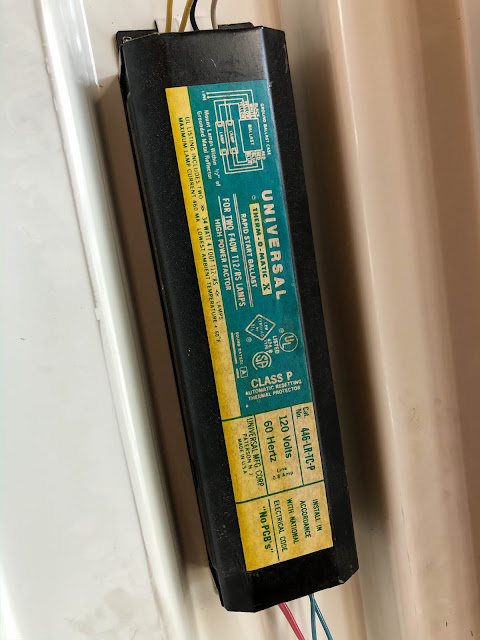 I'm impressed it's lasted this long, really. We had to switch out a couple of ballasts in the Spanish Fork house and that house was only, like, ten years old! So the ballasts in this house lasted a good, long time (just, unfortunately, not every long for us).
Posted by Nancy at 7:23 PM