In which I, once again, pretend I am a statistician...

I'm not a statistician but I'm, you know, average at math. One thing I'm pretty good at is that whole alligator chomp thing, where you make the alligator eat the bigger number.

So here's an exercise for you!

Since March 135,822 people have died due to COVID (and, yes, I'll take "COVID-related causes" as well because, honestly, my mother-in-law died of sepsis; she had co-morbidities that made her more at risk for developing sepsis but—let's be clear—it was sepsis what did her in (her death certificate actually lists a long string of events that caused her death (I think, ultimately, it says "asphyxiation" which is also true, but only because sepsis killed her liver and kidneys and brain and heart and... It was sepsis even though she was also diabetic and she stopped breathing)).

Now, help me out. Which number would our friend Mr. Alligator chomp?

Why is this relevant? Because I have attended exactly one RS weekday meeting in the past year. I guess, technically, two (one was a campout sponsored by our old ward here (still weird that we have an "old ward" here, isn't it?) and the other was the RS Christmas party). Before the Christmas party our "new ward," which was totally 100% new was scrambling to figure out how to be a ward and, (almost) understandably wasn't able to pull together an activity prior to then.*

I spent the first few months that we lived here having daily panic attacks and crying spells and really, probably, could have used some sisterhood because I felt awfully lost and completely isolated, cut off from all my family and friends and everything I knew by thousands of miles.

But, I did what I could with what I had. I tried to go to the game night my friend sponsored (even though, turns out, I'm not made for game nights (I enjoy playing games but playing games in a room where ten other games are being played and people are milling about chatting and kids are running amok actually isn't very enjoyable for me)). We invited people over for dinner and hosted a Christmas party and I went to a playgroup (organized by a different ward because our ward hadn't thrown anything like that together yet). I did what I could to develop a social circle. I probably didn't do a very good job of it because I'm not very skilled at social circling (geometry isn't my strong point; it isn't like alligator-chompy math), but although my circle was wobbly and a bit off centre, I did my best with what I had.

Our next RS activity was scheduled for February 6, but on the day of the event—prior to any rain even falling—they cancelled it, due to a forecast of extreme weather (which...never really came). I'm fine with that because, honestly, driving in the dark, in the rain, in the city, during rush hour...wasn't really what I wanted to be doing that evening, anyway.

So they rescheduled for March 1. But then the activity was cancelled again because our new ward was being plucked out of old stake and spliced into our new stake (but no one really knew how that was going to happen; no one knew if our ward was being dissolved or what). Once in our new stake we met as a ward one time and then "The Rona."

We haven't met together since.

Well, that's not quite true. We had an activity on June 25. Yes, it was outside in a park and everyone seems to have stayed several feet away from anyone else (from the pictures I saw). So that's good. No one had a mask on, which, again...they were outside...so... I mean, my kids and I wear masks when we take our monthly stroll on the park trails (we don't when we walk around the block, though, which...I don't know). It's hard to know what the right thing is to do in every situation.

For me, it's not meeting with other people right now. Even outside. I just...I mean, we went and watched fireworks up the street with the neighbours but we were at least twenty feet apart (how wide is a street?).

Anyway, the YW will also start holding in-person activities this week, which I had the audacity to question. Because—I kid you not—we just had an email from the stake on June 28th that said, "All Bishopric/Branch Presidency Meetings, Ward Council, Presidency Meetings and other meetings are to be held virtually." So I was like, "This is a confusing contradiction to the email sent out by the stake. Are activities not considered meetings?" I said they were free to meet if they wanted to but that we would not be participating.

And I was treated like a flat-out crazy person. My message was circulated all through the YW presidency and was sent to the bishop and everyone either sent me an email or text message or called me to say that this permission has definitely gone through the appropriate chain of command. And I was like, "Fine. Whatever. I'm the crazy person. We'll keep the crazy people at home. Y'all can do whatever you want. Thanks for being sane. And free."

I was just confused because, well, because of the wording from the stake email, but also because the YW had planned on having an in-person activity at the end of June but that activity had been cancelled "due to a spike in local cases." I breathed a huge sigh of relief when that activity was cancelled and with cases continuing to climb I figured we'd be continuing to lie low.

But I thought wrong.

We're all in on the up-and-up plan, it seems. Up with cases! Up with deaths! Up with throwing caution to the wind and meeting in person, anyway!

It sure surprised me when we got an email from the stake this week telling us to expect a return to our regularly scheduled meeting soon (or at least a blueprint for a return). Because—good news—it's safe now, guys!


It could have been. But it's not.

In-person socialization seems like a luxury we really can't afford right now. For example, in my county...our ICU beds are 90% full (of non-COVID patients). A few of the surrounding counties are equally full. Dekalb county is in pretty good shape and could probably take a few cases off our hands but, like, if the ICU is this full do we really need to sit around and chit-chat (since we have another gathering planned for this month (two activities within two months! Why the sudden uptick in RS gatherings?))? Or could we just call one another? (I, for one, spoke on the phone for nearly an hour with a woman from our ward today and I...don't particularly love the phone...but do you know what I do love? Not sending little old ladies to the ICU through my negligence). 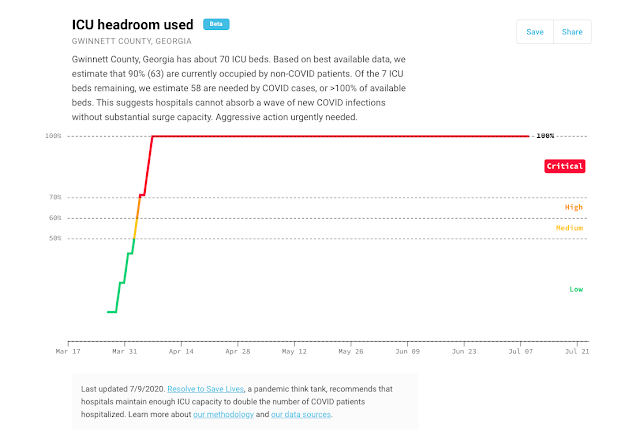 I...don't know why the chart is all wonky like that. Surely we haven't been that full since April 14. Fulton County's graph looks a lot better (and by "better" I mean "how I would expect" (that's the same thing, right?)): 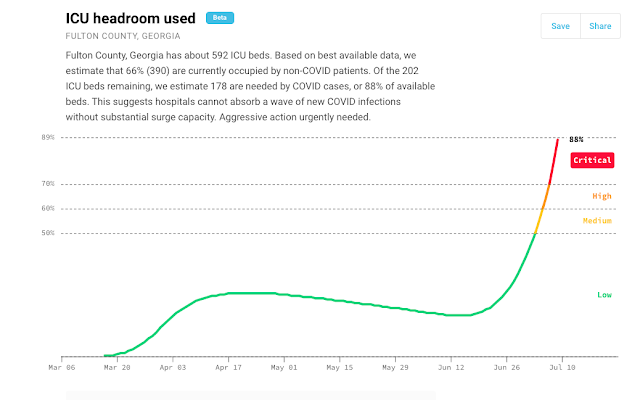 They're still in a tight spot regarding the number of beds they have available. But they're doing better than Gwinnett. Dekalb is at about 50% capacity right now.

All that aside, let's look at some raw numbers!

Georgia alone had 2837 new cases (and only 8 deaths, which is really pretty good for us).

Israel (Israel is freaking out about this, by the way, because they thought they had things under control and also they found that a school was a super-spreader event): 1268 new cases, 4 deaths.

And I suppose it wouldn't be fair to not throw in our most worthy competitor, Brazil: 42,907 new cases, and 1199 deaths.

Anyway, my point is that Georgia (the state) could compete with a number of countries with regards to COVID cases. Finland is about half the size of Georgia, population-wise, but we could double the number of cases in Finland (for a grand total of 16) and Mr. Alligator would still chomp on Georgia.

Canada, on the other hand, has about four times the population of Georgia. So we can multiply Georgia's number of cases by four (for a grand total of 11,348) and their deaths as well (32) and we'd find that, well, obviously Canada is still in better shape because they were in better shape before we quadrupled Georgia's numbers. Perhaps, instead, we should cut Canada's numbers by a quarter to match the population of Georgia. That would give them 92 new cases and 3 deaths.

Those number games don't really prove anything. My point is, however, that we're not really in any sort of condition to be socializing. Not, at least, in person.

If we cancel an activity for fear of wet roads (which kill 5,700 people annually!), then surely—surely—we should not expect to be holding activities when there is a virus circulating rampantly throughout our population—a virus that has killed (already and so far) 135,822 people! Especially when our ICU is 90% full. I mean...I don't make the rules (obviously) I just do the math (kind of).

I've spent the better part of this week raging about this internally (and outwardly to Andrew (and to my mom (and to Crystal and Bridget))). I probably should have left it at that and not put any thoughts down here, but I'm just so angry, you know.

Though, did I ever mention that GSU (and UGA) will be requiring masks for in-person classes, as well Gwinnett Public Schools (not that we'll be attending this year; we just formally unenrolled Rachel). I was also grateful to hear what President Uchtdorf had to say today: Mask your face, don’t mask your heart.

I'm worried about what I think we'll see in the next couple of weeks. I hope I'll be wrong. But I feel like the character in The Pale Green Pants, who said, "'I do not fear those pants / With nobody inside them.' / [Who] said, and said, and said those words. / [Who] said them. But...lied them."

* They wanted to do our inaugural RS activity "right," so they put off having one until they felt they had their act together, as a presidency, and they put together a beautiful Christmas dinner. But, you know, now our COVID activities are just "meeting at the park with your own lawn chair to chat" and I could have really used a slap-dash activity like that in September of last year. I think our entire ward could have used a few activities like that in September so we could get to know each other a little better when we were all feeling new (because feeling new makes you feel isolated). So I'm a little sad that what's "good enough" for now wasn't "good enough" back then. For multiple reasons.
Posted by Nancy at 11:39 PM