Zoë got a letter in the mail today, which she was rather excited about. She was even more excited about it when she opened the envelope and a sheet of stickers fell out, along with a form letter from her little friend, inviting her to be in a "sticker club." My heart sank. I just don't have sticker clubs in me. They never work out and I don't like the feelings of obligation that they cause others.

All you have to do is send stickers to the person in the #1 slot and then send a copy of this letter to six people and soon you'll get thirty-six letters (from complete strangers) with stickers for your child!

I told Zoë that I just don't have sticker clubs (or many other things resembling pyramid schemes) in me. We would have to write a letter of regret, so Zoë did. Then she brought it to me and read it to me and came this close to convincing me to stop being a party pooper and let her join the sticker club. 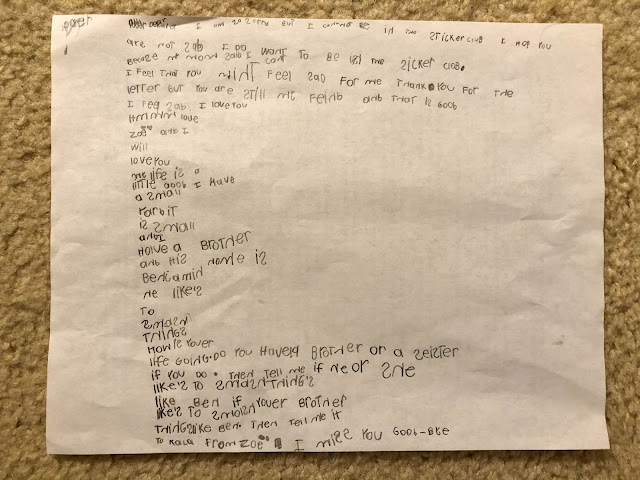 But I stayed firm. After all, every party needs a pooper and, as a particular sister oft reminded me through childhood (because I am a rule-following goody two shoes), that's why they invited me. A party (or club) wouldn't be a party (or club) without little ol' me saying, "Mom said you could only invite two friends over and you invited three!" or "This really sounds like a preschool ponzi scheme, but thanks though." So I stayed firm...to lend the club credibility.

I also suggested that Zoë write to tell K a little bit about her life. So she did.

My life is a little good. I have a small yard. It is small.*

And I have a brother and his name is Benjamin. He likes to smash things.

These are the notes to her letter that I included with the transcription I typed up (we also included some stickers for little miss K because we're not entirely heartless):


*  Our yard is actually ginormous, with a swing set and a trampoline and a creek, about twenty trees. In/from our yard we’ve seen frogs and snakes and chipmunks and squirrels and deer and possums and raccoons and owls and woodpeckers (all sorts of birds, really) and foxes and coyotes… Oh, and fireflies! We had so much fun with fireflies in June/July (they’re about gone now but they were fun while they lasted). It’s, like, not a small yard. But she spends most of her time just on the driveway (away from creepy crawlies), playing with sidewalk chalk. And for the record, we live in the city. We’re not in a rural area. Atlanta just has a lot of trees and is known as “the city in a forest.” It’s…wild.

** She knows Kayla does but thought she should give Kayla something to talk about.

*** Benjamin likes to smash rocks outside to break them in half. He smashes everything he can get his hands on. The other day he smashed 136 pieces of sidewalk chalk (a brand new mega-pack), just pulverized them into dust. She might be looking for camaraderie. Like do Kayla’s siblings ever do crazy things like smashing all the sidewalk chalk?

At least she acknowledged that her life is still at least "a little good." I mean, it's not all bad. Most of it, maybe (her mom won't let her join a sticker club, after all), but there's, like, a tiny sliver that's not and she chose to focus on that bit. May we all always have the courage to acknowledge that our lives aren't always great, but still choose to focus on the little good we have.

Anyway, her letter had me in stitches, metaphorically. I just could not stop giggling about it (on the inside). It made me feel a few twangs of guilt, sure, but mostly it was just so adorable.

On to my next meanness...

In a stroke of bad luck, it just so happened that Miriam sliced her finger immediately prior to the weekly changing of the chore guard. Miriam was moved from being the family floor-ist (which I've begun calling the child in charge of sweeping because it's more lyrical to say, "Where's my floor-ist?" than it is to say, "Hey! Who forgot to sweep the floor...again?") to dish duty. She asked if she could get out of it, but (1) no one wanted to switch jobs with her and (2) she also jumped back to practicing the organ pretty quickly so I told her doing the dishes wouldn't hurt any more than practicing the organ (I had to tell her multiple times to practice the cello, however (an instrument she enjoys...just not as much as organ)). So we slapped a glove over her hand and made her load the dish washer, like a true champion chore-doer (work through the pain, kids). 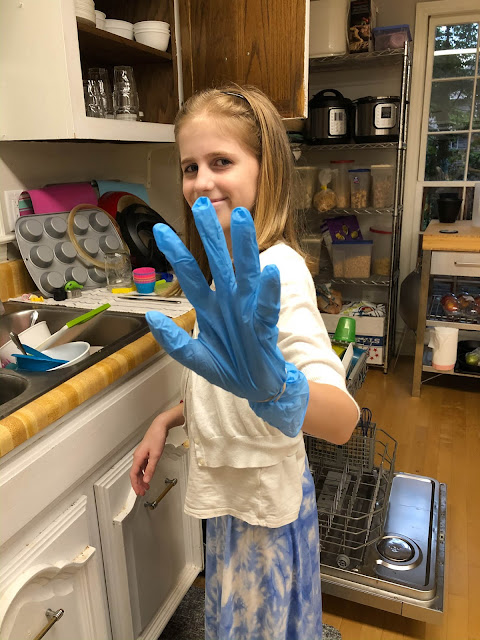 Here's what her cut looks like after a day of healing (we changed her bandages after her shower on Sunday); it's really not so bad and I think it will heal up quite nicely. 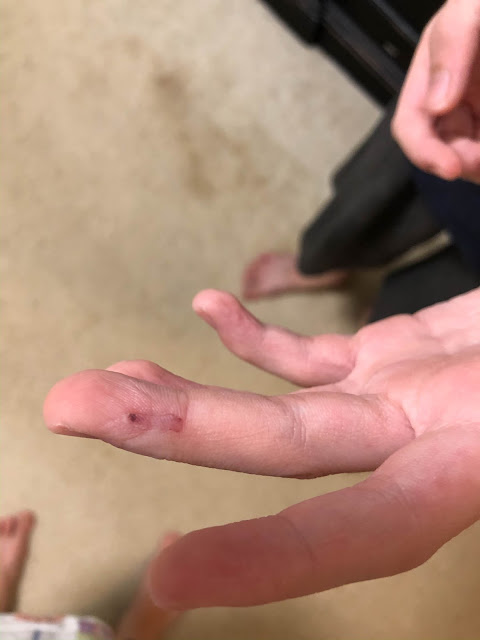