"Hoo-hoo, Mom," Alexander said, stumbling into my bedroom at 1:00 in the morning (I know it's up late; Andrew is still recording his lecture and I'm in the very bad (?) habit of staying up until he's ready to go to bed). He often stumbles into my room and says weird things. Sometimes it's just, "Hey." Sometimes it's, "Will you take me potty and then tuck me back in my own bed? Because I do want to sleep in your bed but my bed has all my toys." Sometimes, apparently, it's "Hoo-hoo."

I caught him mid-yawn, but you can see he brought one of his stuffed owls with him. 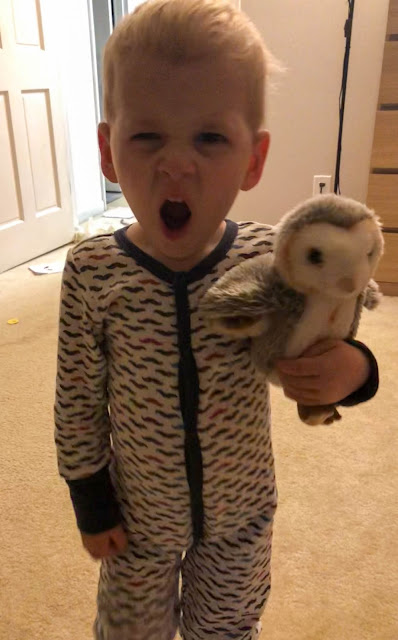 This boy and his birds!


I mean to include this in the post about Zoë, but forgot to. So instead it gets its own post (because editing posts is for the, uh, birds).

Alexander has been very good about our bedtime routine lately. He knows we have scriptures and prayer and then we go upstairs and read some pictures books and then I tuck him into bed with a lullaby and a back rub and help him say his prayers...and then I go into the hallway and read some of our current chapter book to the big kids. It started out that they all were supposed to be in their beds, but then we read the illustrated Harry Potter stories and Benjamin and Zoë wanted to look at the pictures. And now they both just think they get to stay up with me while I read to them, which really is fine. It's kind of nice to have some two-on-one time with them.

Benjamin brushes my hair every evening and sticks an insane number of bows in it. It helps keep him from getting wild and wiggly while I read. Zoë just sits by me and follows along, correcting me whenever I make a mistake.

"I need to be in the hallway for this story," he insisted. "There's birds in it."

"You need to be in bed for this story," I told him. "It's your falling asleep time."

I put him back in bed. Because I'm heartless. And because he can look at the pictures in the morning.

How did he become so absolutely obsessed with birds? Answer: His trip to the zoo last year. But how has he maintained his interest so passionately over such a long period of time? A year is an awfully long time for a two-year-old.
Posted by Nancy at 1:43 AM