This morning Alexander found a little heart-shaped box that some child or other received at a Valentine's Day party years ago and decided that he wanted to fill the box with spiders and give it to me, as a present. It was a charming gesture, to be sure, but why he felt anyone would appreciate being gifted a box of spiders is beyond me.

But, collecting—or trying to collect—spiders kept him fairly occupied during our busy homeschool hours this morning, so I would have been crazy to stop him. He was very frustrated by his spiders, which simply wouldn't stay in the box. They kept running out and getting away!

I should note that the spiders he's looking for are known as "daddy longlegs," at least down here. I have a hard time referring to them as that because even though they have admittedly long legs, they aren't what I would call "daddy longlegs." I'm used to calling harvestmen— Opiliones—"daddy longlegs." They aren't spiders at all; although they are arachnids, they have one fused body segment so they look like a little ball with legs (and they don't spin webs).

These spiders at our house were certainly not "daddy longlegs" in my mind, but when I've called them "cellar spiders" to locals they have no idea what I'm talking about until, suddenly, they do and then they say, "Oh, daddy longlegs."

But these daddy longlegs are true spiders, with two body segments and the ability to spin webs (so many webs, guys, and they're messy little houseguests because, while a lot of spiders consume their old spider silk, these spiders just leave them to collect dust and turn into cobwebs and they produce so much frass—a ridiculous amount of frass—I am forever vacuuming up spiders and spider webs and spider frass) and everything.

They're plentiful around this charming old house of ours and Alexander has decided that they are his friends. He will name them and pick them up and let them run along his arms until they drop to the floor and run away. They're splendid companions (slim pickings, what with quarantine). They just won't stay in his little box! So frustrating!

Eventually he decided that if he wanted to give me a spider he would have to make one himself, so he got a paper and some drawing utensils and made this: 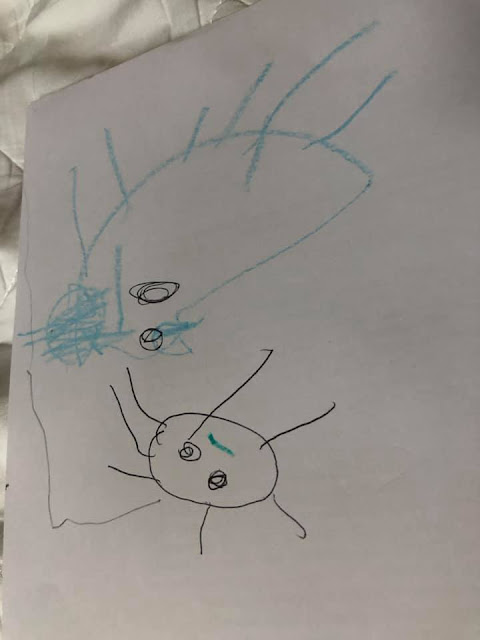 One spider (the big one) is happy. The other spider (the small one) is sad and is crying for his momma. At least, that's what I was told. They look equally sad to me, but are such cute spiders anyway!

I was glad I took a picture when I did because a few minutes after I did Alexander decided to rip the spiders off his paper, crinkle them up, and stuff them into his little spider box. 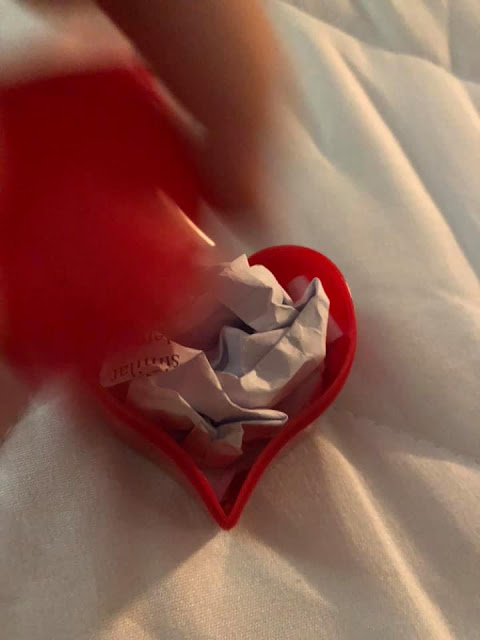 Having finally trapped his spiders he decided he needed an adequate way to carry them around with him (I guess he gave up on the idea of presenting me with a box of spiders and decided to keep the box of spiders for himself (which I totally get...I mean...it is a box of spiders, after all)). He picked out a pair of jeans, which I'd never had him try on. My children tend to prefer...not jeans...over jeans. Leggings. Sweat pants. That sort of thing. But these jeans, you see, had pockets—a place to keep his box of spiders!

Unfortunately, even with the elastic adjusters inside buttoned as tightly as they could go the pants were still ridiculously big on him (another reason my kids have traditionally enjoyed pants with a full elastic waist) so Zoë taught him the "headband-belt trick" Miriam invented years ago when literally no pants she had fit her waist. You take an elastic headband (sewn in a loop), slip it over your waist, and fold the waistband over the headband. Presto—a smaller waistband! 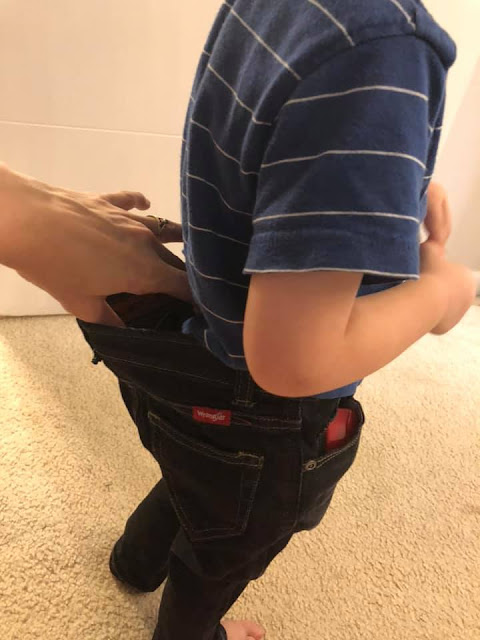 As it turns out, this "headband-belt trick" works much better on a simple pair of leggings than it does on bulky denim, but Alexander happily carried around his box of spiders in his pocket all day long while continuously hitching up his pants.

I'm hopeful that by the time he is skilled enough to fill a box with spiders he will also be wise enough to know that not many people (his mother included) would be thrilled about receiving such a gift.

Unrelated to spiders, here is a picture of some ladybugs that Alexander drew while we were playing Zilch on Sunday. Aren't they cute? 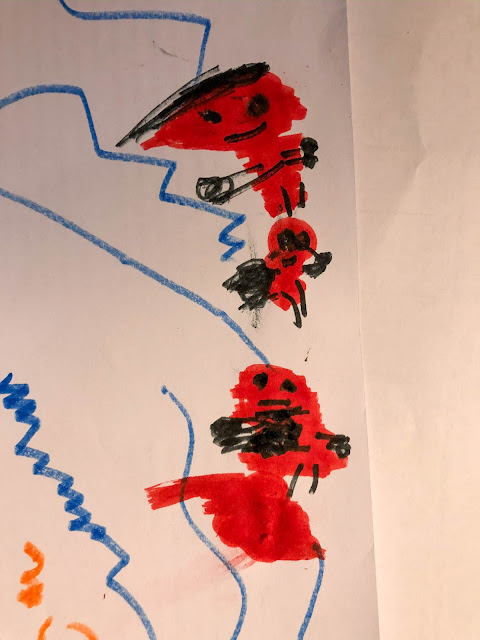