We purchased windows for our upper floor at the beginning of May and today they finally came to install them. We are very happy about this because, if you remember, our air conditioner broke in May as well (after we'd decided to spend our money on windows) and our windows were (a) not energy efficient at all and (b) were often painted shut or screw shut and (c) if they weren't sealed shut they wouldn't stay up without being propped open and didn't have screens (which makes having windows open about impossible in the south). I don't think this upper floor had been properly aired out in decades. So now we have beautiful, functional windows (that don't at all match the outside of our house...but we have plans for that...one day...in the future).

I was also a little not happy about the timing because of how rampant the coronavirus is in our community right now and the workers showed up without masks.

But, largely, we didn't have to interact with them (and considering they were here to remove our windows entirely there was quite a lot of natural ventilation). I moved our homeschool to the basement for the day (we also replaced a few windows in our front room, which we hope will help keep it cooler as well since it doesn't have any sort of air circulation system (the other rooms that get a lot of sun at least have ceiling fans)).

For science we are studying "Earth science," which means we're also studying the solar system. Yesterday we started studying the sun and the moon and today we were supposed to do a few experiments with the sun/moon today, but I didn't gather my supplies beforehand and didn't want to go hunting through our things upstairs while the workers were here, so I decided that we'd make a solar oven instead. So that's what we did.

Here are Miriam and Benjamin working on their solar oven: 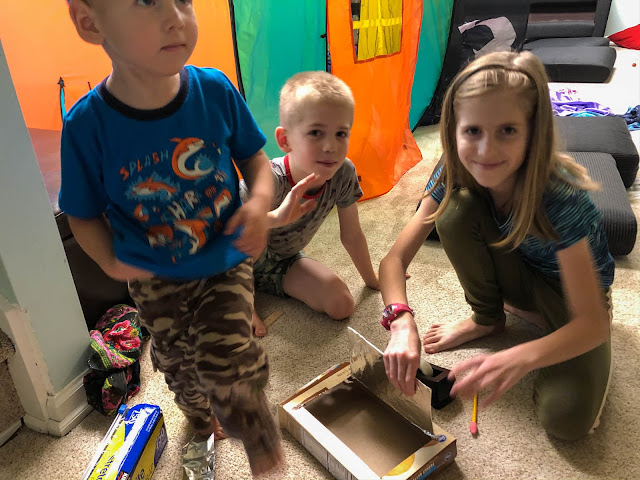 The little kids had a sleepover in the tent in the basement last night so that we wouldn't have to wake them up when the workers showed up early to start ripping out their windows. Alexander was so excited to have a sleepover in the basement—he stayed down there all night, didn't hear a peep from him (though I did leave a trail of lights on leading from the basement up to our bedroom, just in case). Anyway, that's why the tent is set up in the background. 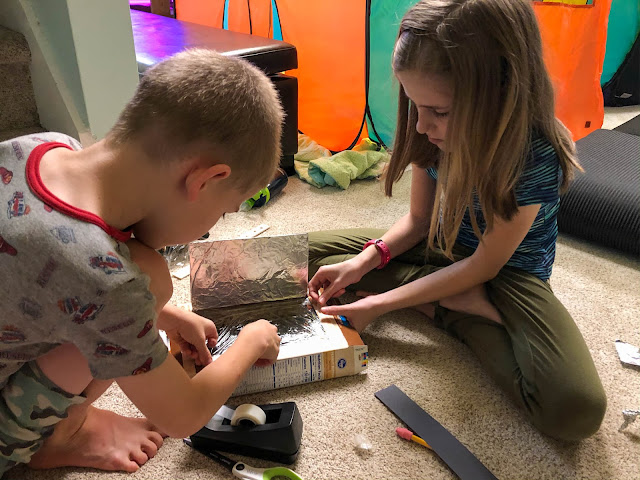 I'm not sure why we're building the oven out in the nice, carpeted area while the craft table (which I cleaned off specifically for homeschooling purposes this morning) went unused. But, here we are... 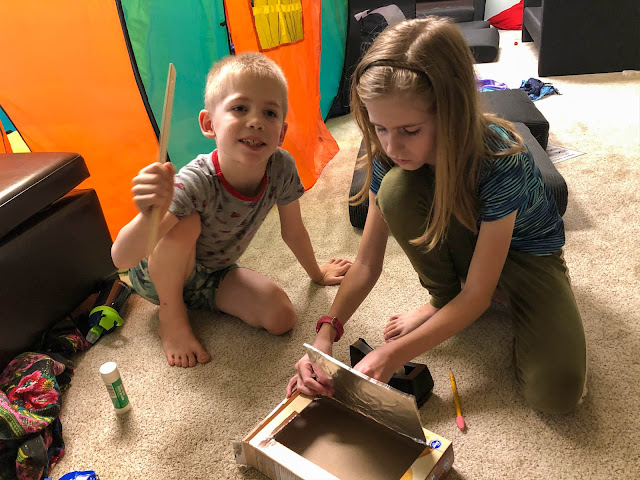 And here are the kids getting their s'mores ready to go into their oven. 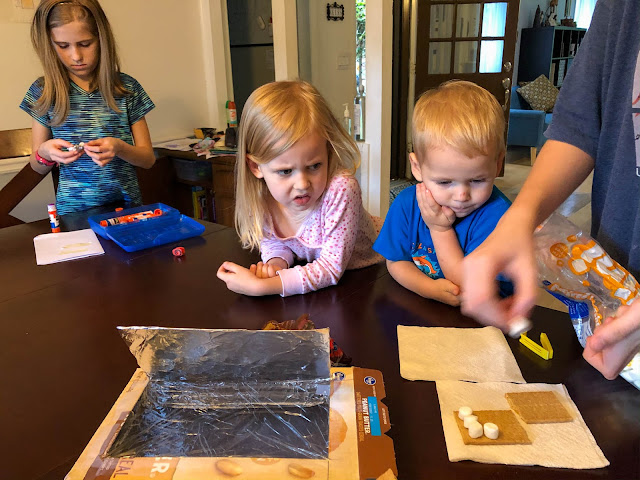 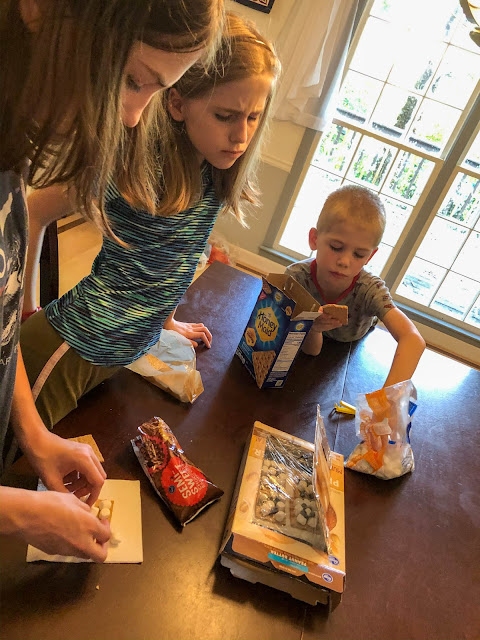 We then carried our oven outside and found a nice, sunny spot for it. 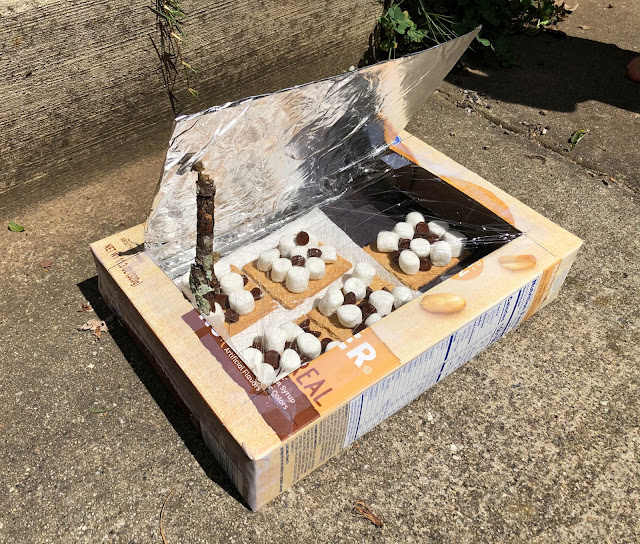 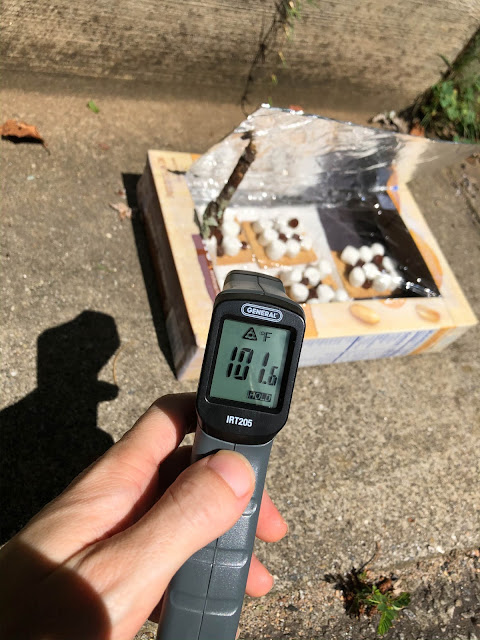 Here are the kids, already anxious for their s'mores. 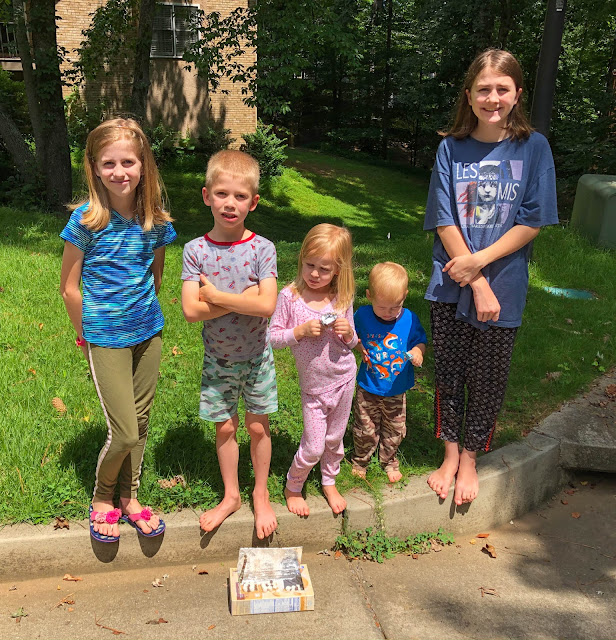 They had a long time to wait, however, so we went in and got some lunch and played around in the cul-de-sac, stopping every ten minutes (or so) to see how our s'mores were doing. 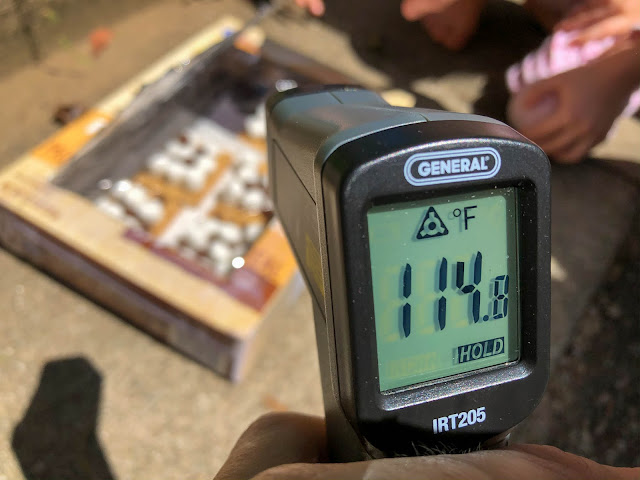 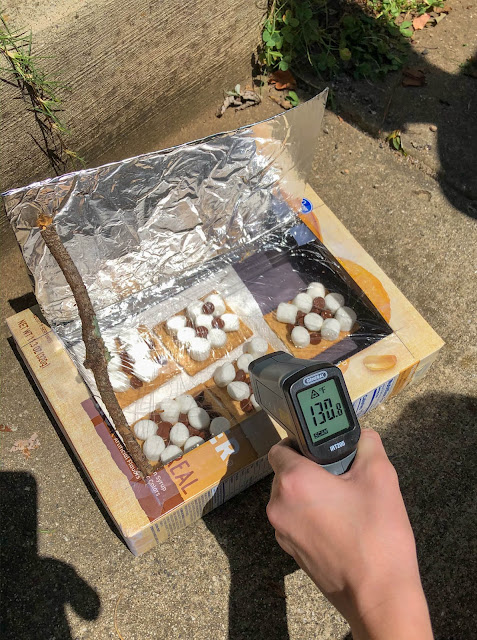 When we went to take another reading the battery died so we had to replace them (which was an adventure because we found that our lovely Georgia humidity had caused an entire pack of batteries to corrode) and we accidentally switched our reading from Fahrenheit to Celsius (the switch to change systems is under the batteries (which seems like a bad design to me) and we didn't feel like popping the batteries out again to switch them back so we just left them). 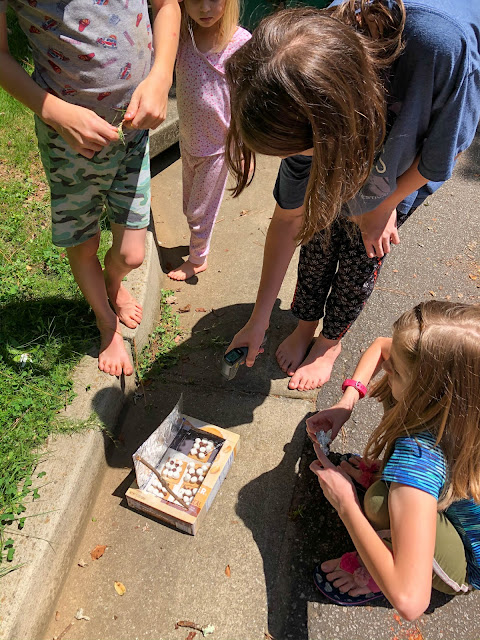 Rachel happens to be working on the metric system for chemistry, so she got to do a few conversions from Fahrenheit to Celsius (and vise versa). How lucky to (accidentally) find an experiment that worked for both sets of learners! Rachel had just been participating for fun...until we made her do all the conversions for us! 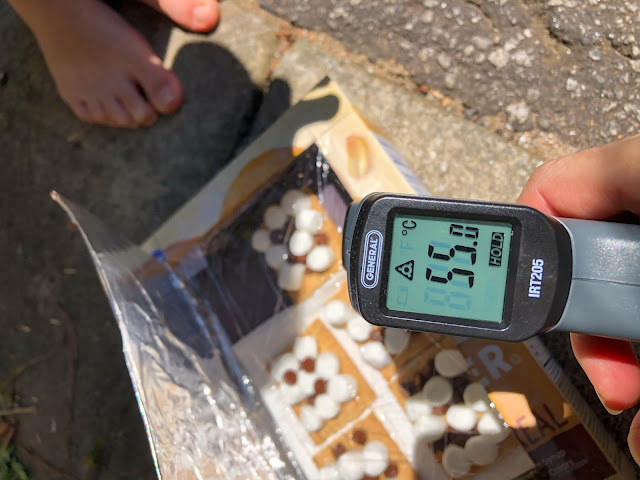 Since our oven had only risen very slightly in temperature over the course of a half hour (or so), we figured that was about as hot as our oven was going to get and everything was looking pretty gooey inside so we decided to call it a day and took our s'mores inside to finish assembling them.

The kids were very excited to get dessert with lunch. In fact, when Rachel saw what the kids were making she suggested we make s'mores and I said, "That's the plan."

"Wait. What? Seriously?" she asked.

"Oh, wow! I didn't think you'd agree to that. Usually if I want a treat I have to ask Dad for it because I know you'll say no!"

So, that about sums up our parenting dynamic. I'm the "No treats! No treats for you!" parent (except when I'm the "let's have s'mores with lunch" parent, I guess).

Here's Rachel with the box of baked s'mores: 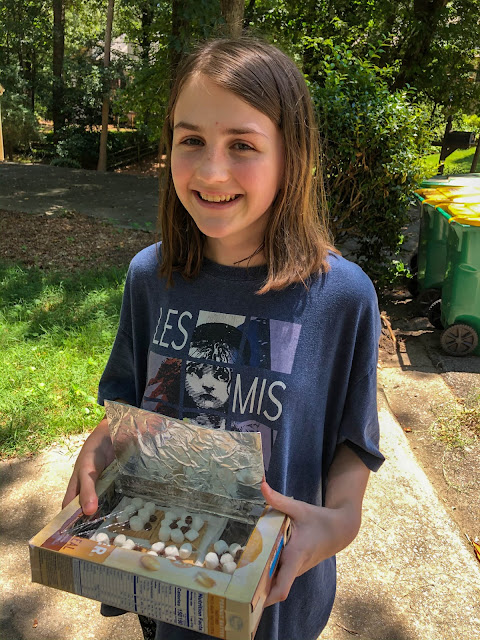 And here's Alexander showing off his perfectly smooshy s'more: 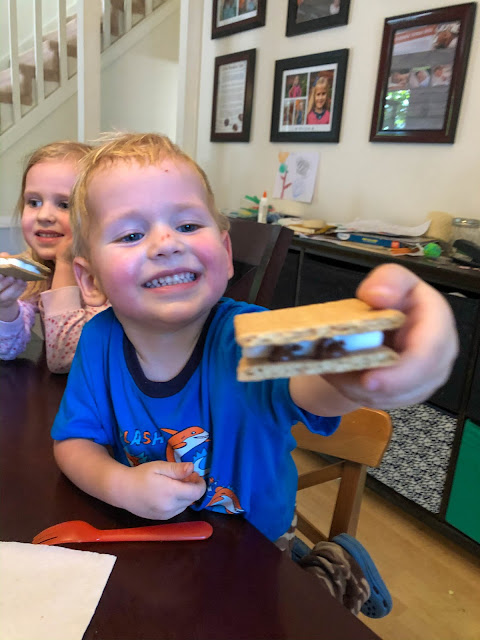 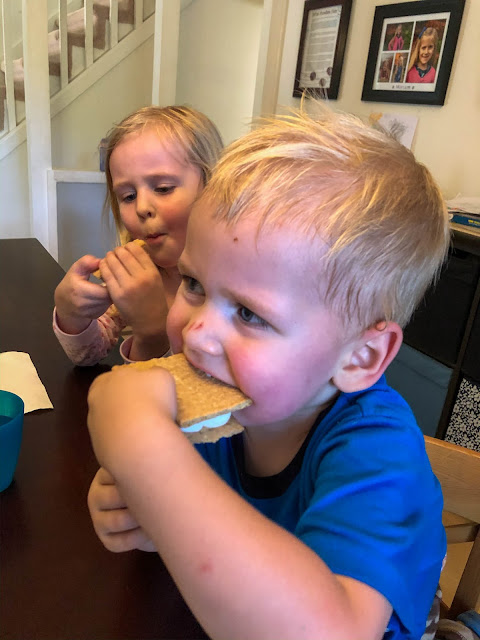 The s'mores were ooey and gooey, just as a s'more should be: 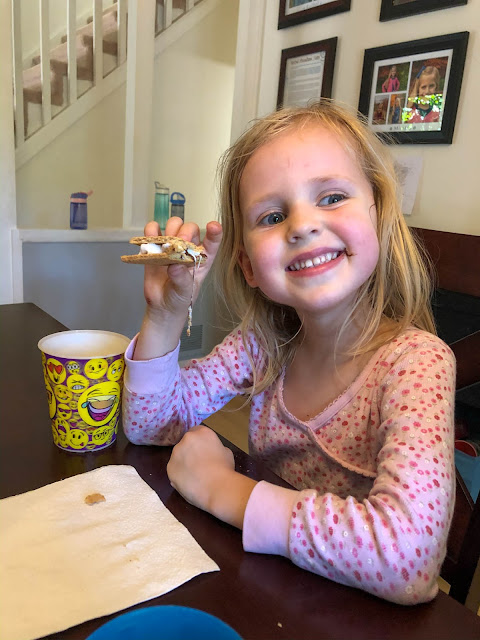 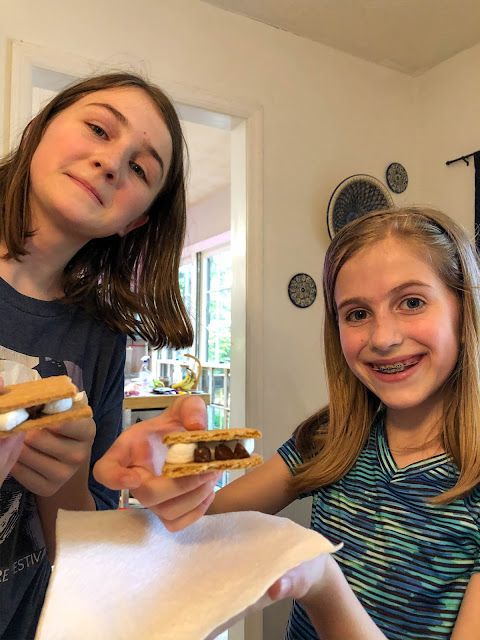 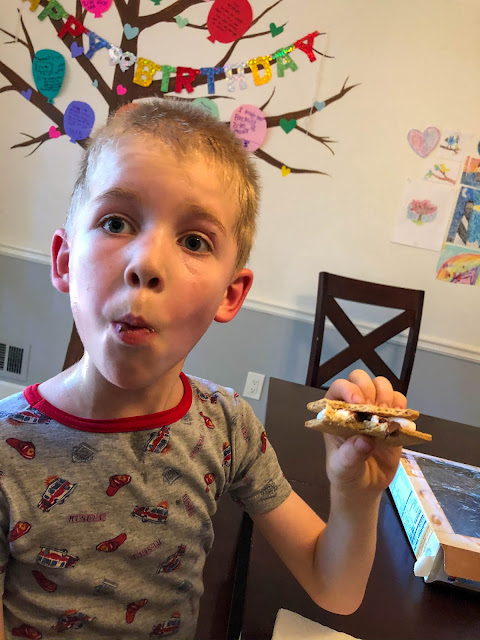 Some of us got a little messy: 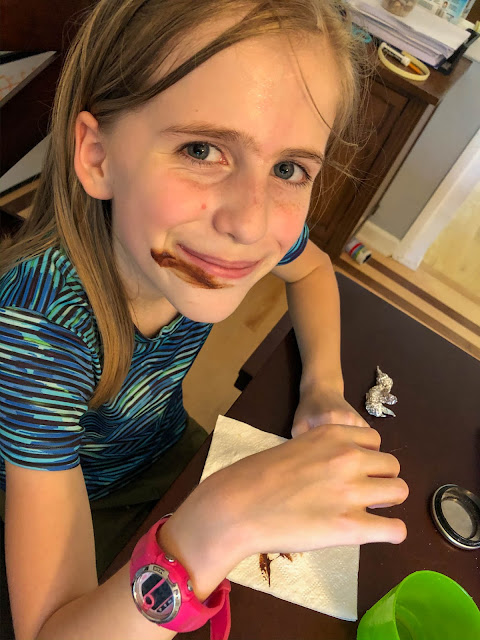 But overall, the mess seemed to be fairly well-contained. 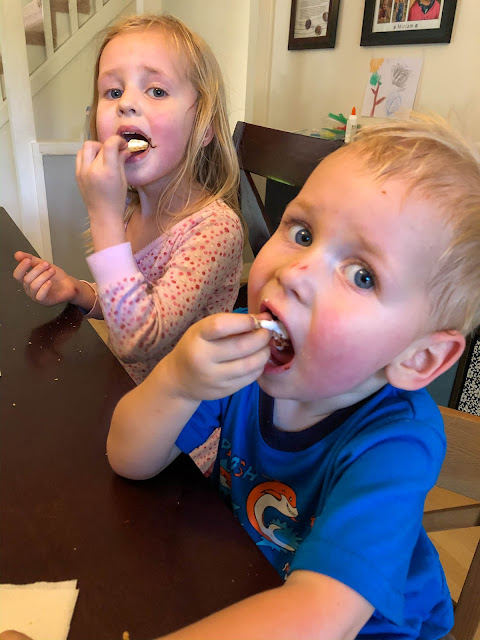 This is an experiment I know the kids would 100% do again. It wasn't too stress-inducing on my part, either (some experiments require me, as the facilitator, to be very, very patient; this one did not require a lot of patience on my part (though, I suppose, it did require patience from the children (some of them had a hard time waiting an hour for s'mores to be ready))).

We believe that a thicker box might help our oven come to a higher temperature, but it was recycling day yesterday so we didn't have very much to choose from, box-wise, and had to settle for a flimsy cereal box. Corrugated cardboard might have worked better.

Another factor in our low oven temperature could have been that we didn't let our oven preheat empty. The bottom of the oven is covered in black paper to absorb energy from the sun, but we covered up that black paper with our s'mores (which were on a white paper napkin). Perhaps if we had let the oven preheat properly we would have gotten a higher temperature inside our oven.

So perhaps we'll try it again to test some of our hypotheses. It worked well enough, though, and the kids had fun!

While we were waiting we played a little freeze tag in the cul-de-sac. The older kids really wanted me to play with them, but it really bothers Alexander when I run. He just can't handle it, emotionally. He's fine if he runs around while I watch. But I can't run around. It's too much for him.

I figured, though, that he's quite a bit older now. He's grown up a lot since we moved here. He's gone a diaper-wearing nursling, who had to be swaddled to sleep, who could hardly walk, and whose most terrific phrases were "Happy birthday" and "screwdriver" to a walking, talking, potty-trained big boy who can sleep in the basement all night long...

Surely he would let me run around and play tag with the kids!

So I joined in, running around the cul-de-sac in circles, essentially, and Alexander stopped in the middle of the cul-de-sac, lifted his head to the sky, and howled, "MOMMY! STOP! THIS SEEMS LIKE A VERY BAD IDEA! WAAAAAAAAAA! I NEED YOU TO HOLD ME!"

So I had to stop playing tag with the kids so I could hold Alexander, who feels like it's too stressful of a thing to have his mother darting in and out of his vision. Still. For whatever reason.

Honestly, it's...kind of a weird thing about him.

Here's a sneak peek at our new windows being installed: 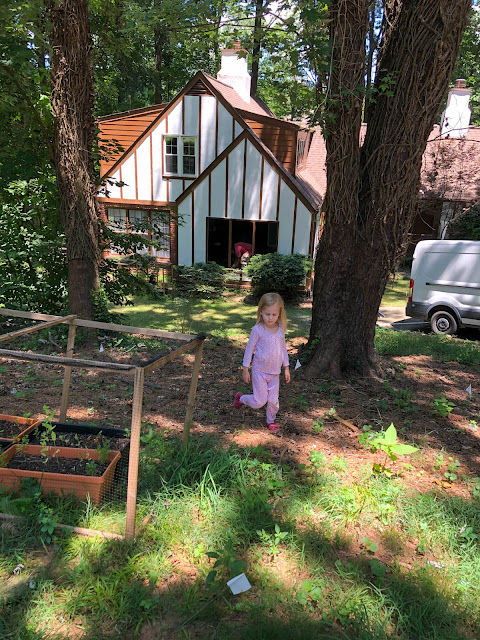 And here are the kids enjoying the only things that really grew in our yard from everything that we planted (our yard is, evidently, very shady and plants, apparently, need sunshine to grow): 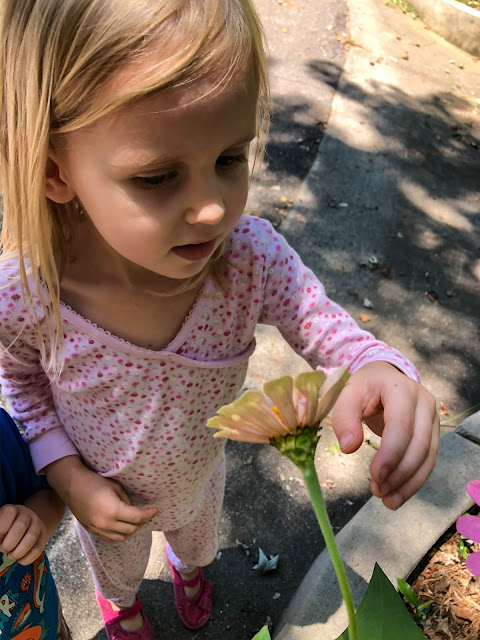 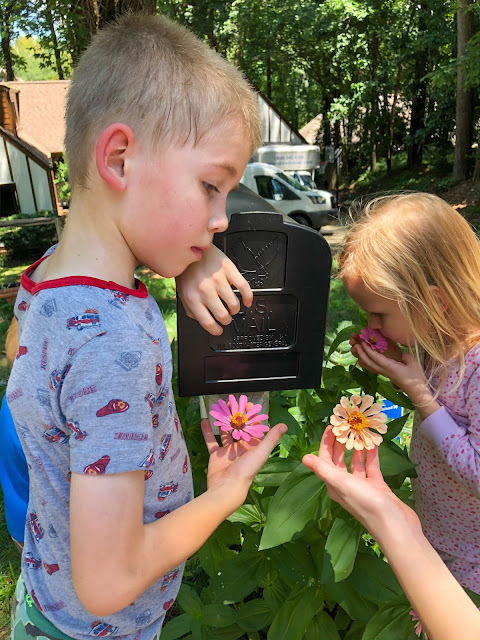 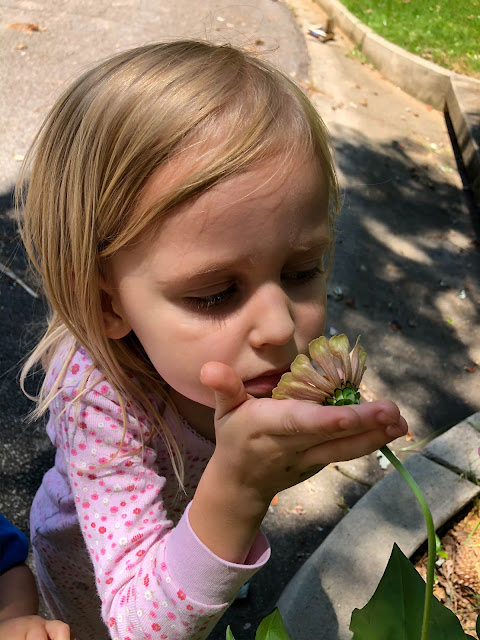 Zoë is very proud of these zinnias! She planted all the zinnias (Z for Zoë, Z for zinnias!)—two whole packages—and these are the only ones that came up (and we're very happy they're here)!

Oh, and Miriam made this tinfoil bird out of scraps from our solar oven project. It was meant to be a swan at first, but I think she decided it was a hummingbird: 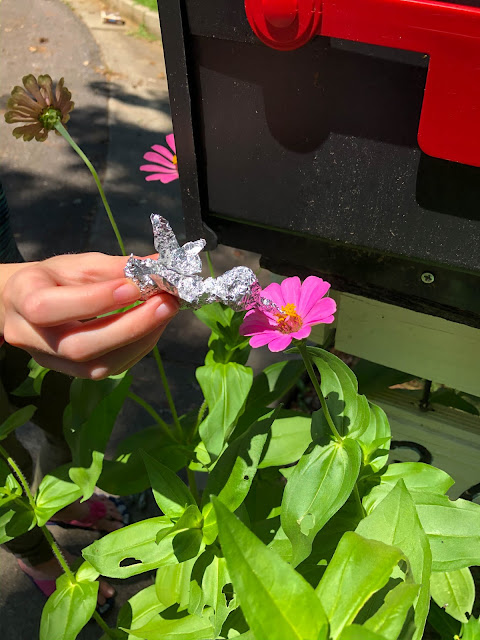