Andrew bought a block printing set a while back—it came with some lino blocks, some wood blocks, and some rubber, as well as a set of cutting tools, some ink and a roller—and it's just been sitting around waiting for his schedule to lighten up enough to learn how to do it.

So naturally he found me sitting in the reading chair with the little kids snuggled up on my lap for some stories.

"We could, uh, use your help," he said, clearly panicked.

"Miriam cut her finger," he gagged. "You need to look at it."


We have a pretty good arrangement at our house. He does vomit and wiggly teeth. I do potty training and first aid. There is, naturally, some overlap in these duties (when Andrew, the vomit-cleaner-upper isn't available, for example, I will clean up vomit, or if I'm not around to wash and dress a wound, Andrew will jump in, but largely he does vomit and I do blood and I'm really okay with that).

I found Miriam at the bottom of the stairs, whimpering, with her finger out stretched. It was bloody, but not terribly (like, there was blood present, but it wasn't streaming out (don't get me started on head wounds (they bleed like the dickens)). We washed it off and then wrapped it in a paper towel for a little RED (rest, elevation, direct pressure). I've taught my kids this. I don't know how it's not instinctive at this point but they always have to be reminded of this process.

After holding her finger for a few minutes I removed the paper towel. The wound seemed to have closed a bit (no new blood, at any rate), so we threw a butterfly bandage on it to keep it together and put a regular bandaid over that.

I think she'll survive and I'm fairly sure she'll be okay without stitches; she's just upset that her beautiful music-making fingers have been injured. But that's always a risk, I suppose. She didn't practice today, but I think I'll be able to convince her to get back to practicing in the next couple of days.

Anyway, it was quite a misadventure for her. The tool she was using slipped and it went right into her finger. She was moving the tool away from her body but forgot about keeping her "holding hand" away from the knife as well, which was her undoing. Of course, Andrew had just sent the girls into the basement to get to work, telling them to figure out their "own technique," so I can't quite blame her for not thinking of keeping her fingers out of the way of slipping tools. They should have had a little more guidance (Andrew admitted sheepishly).

For his part, Andrew managed to make a beautiful R stamp (a tribute to the coding language) and I whipped up a set of birthday candles later in the evening after the kids were in bed (Rachel is working on a TARDIS, Miriam on some piano keys, and Benjamin is working on his design still). 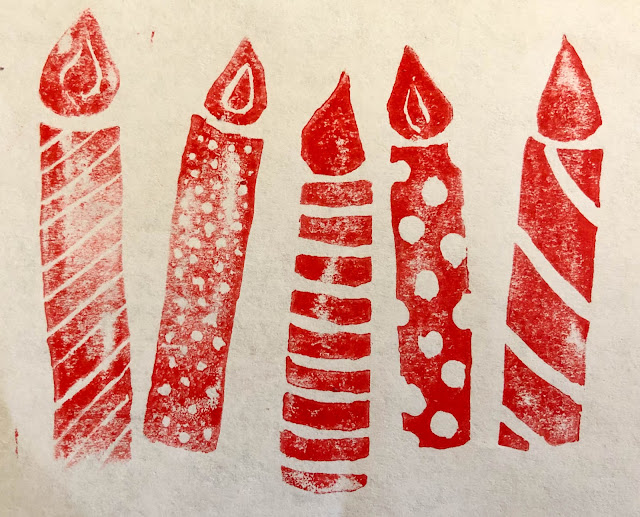 "I want to make my own birthday cards, I think," I said over dinner when we were all talking about what we might make.

"Ummmm, Mom," Zoë piped up. "I think those would be called 'invitations.' Like, when you make cards for your own birthday? Those are invitations."

But cute of her to pick up on that distinction!

We still have some practice to do (and hopefully our carvings will get better as we go along (though, honestly, I'm scared for carving actual wood because that seems harder than the linoleum because you have to worry about grain direction and the hardness of the wood and so forth)), but we made a pretty good start, aside from Miriam's mishap!
Posted by Nancy at 5:37 PM