It was a dark and stormy night...

...and I had only just tucked my little ones in for their tornado-warning tent-sleepover, turned out the light, and crept up the stairs (and wrote a quick blog post) when I got a text message from Rachel (at 10:18 PM).

"There's a wet spot on the floor by the bathroom?" she frained.

This is not technically a valid scrabble word. Whereas refrain comes from the Latin re+frenum and means to bridle or restrain oneself (or from the Latin refringere, which means to break up, as with a refrain in a song), frain is a rather Scottish way to inquire about something. But Rachel was desperate, so we allowed it this afternoon.

Anyway, she asked/told me that the floor was a bit wet.

So I went back downstairs to look at it and...oh, no.

Everything was not fine, as I so erroneously claimed in my last blog post, which I had finished (at 10:14 PM) mere minutes before Rachel made her discovery. The carpet was wet all along the outside wall as well as the wall between The Lego Room and the rest of the basement. The Lego Room was also wet. 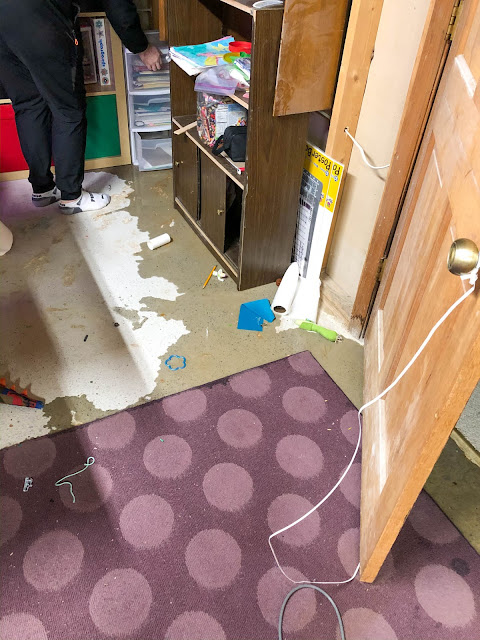 The part I didn't lie about was that we had a few branches come down (rather noisily) on the back porch (and a few other places). 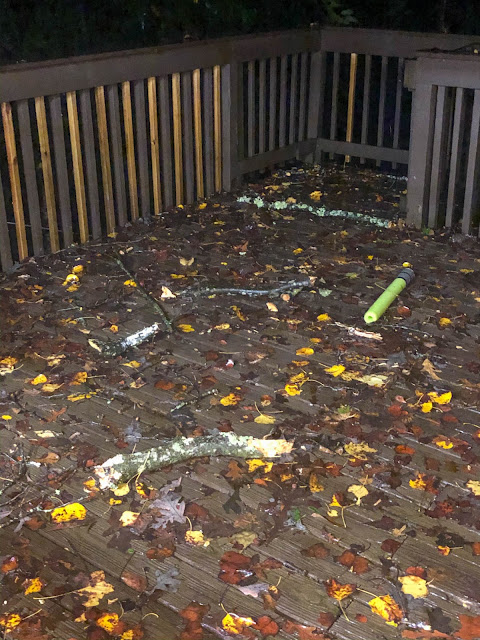 The branches we can easily take care of later. The water on the other hand, needed some immediate attention. We could hear it trickling and determined that it wasn't coming from any pipes so our next step was to look outside and—oh, boy!—there was a veritable waterfall running immediately behind our house.
We determined that the water, which has honestly never run that way (as far as we know; we've been out in several storms, looking at water paths to see how we can landscape our yard to minimize erosion and...you know...more damage to our foundation. Anyway, despite never having run down that way, it seems the immense amount of rain we got this evening overpowered its usual channels and the water created a new way!
So I put on my boots, grabbed a shovel, and started digging an alternate path for the water. Once the water was diverted Rachel and I bailed out as much water as we could from the little puddle that had pooled by the foundation. And then we spent several more minutes digging a trench on the far side of the house, trying to get the water to leave some space between itself and the house. Andrew came out to join us for this part (he'd been doing some work inside the house while Rachel and I were outside getting soaked).
We were successful as far as we could tell...in the lashing rain, in the dark of night. We'll have to see what damage we did to our yard in the morning (and we do have plans to create better drainage in our yard...we just haven't done it yet).
We were also very wet. 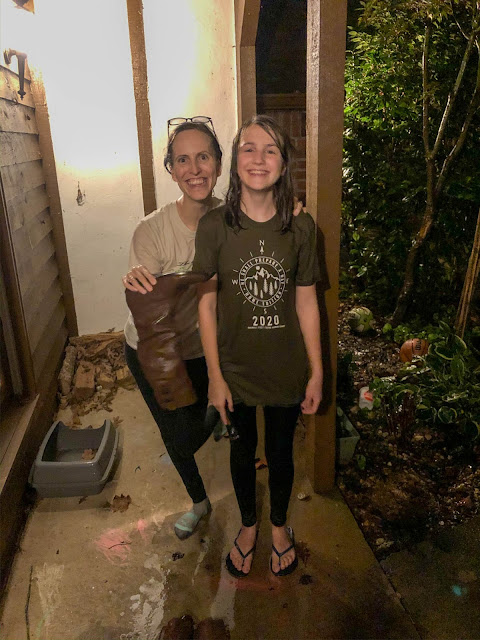 Rachel and Andrew both lost (but miraculously found) one of their flip flops while they were working (before I made Andrew go put shoes on; Rachel was mostly the flashlight holder so shoes were more irrelevant for her).
Once our work outside was done, we turned our attention to the inside. We had to put the children back to bed—upstairs in their beds this time since the tornado warning had passed and the upstairs wasn't flooding—get changed out of our clothes, look up information on how to dry out a carpet, and...try to figure out how to get our hands on a wet/dry vac at 11:30 PM. Andrew was planning on just running to Wal-Mart or something, but they have limited hours because of COVID. So instead I put out a plea on Nextdoor and, luckily, our new next-door neighbours were up and, even more luckily (?), their basement had flooded a few weeks ago and they still had their parents' wet/dry vac and they were up, so they pulled it out for us!
We spent quite some time vacuuming up what water we could, peeling back the carpet, and setting up fans. We'll be getting some heavier-duty fans tomorrow. Renting? Buying? Who knows? 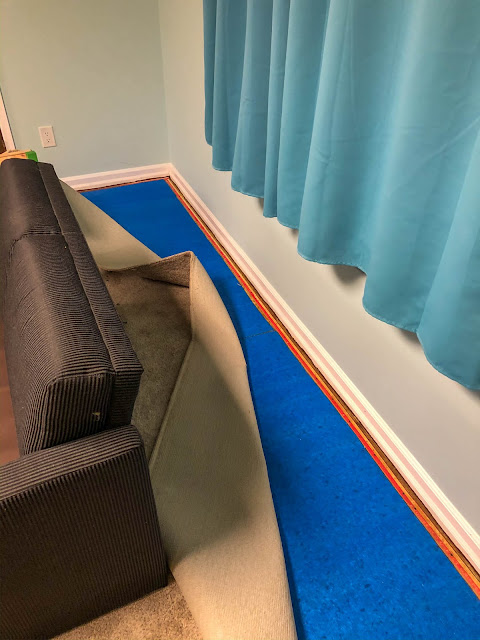 We're still figuring that part out.
The good news is that it doesn't seem to be too wet so if we can get things dried out in the next couple of days we should be fine. And then we can figure out how to make this not happen again.
I feel like we've had just one crisis after another in this house, with the basement flooding last year, the windows getting fixed (which weren't precisely a crisis but I'm so glad I reglazed the downstairs ones and that we replaced the upstairs ones before these hurricanes because otherwise they would have been), the air conditioning going out, a leaky pipe (multiple of those, actually), a leaking roof (that is leaking not only in the dining room but, we learned today, in the garage as well), our circuit breaker box going on the fritz, and now our basement flooding again...
I just...like...eventually we'll be in this house for longer than two months without a somewhat major crisis occurring, right?
I guess we should count our blessings. When we found out our roof was leaking (during Hurricane Sally), one of Andrew's students had a tree fall on their house so their roof was really leaking. And when I went on Nextdoor to bum carpet drying supplies off our neighbours, I saw that someone else had posted that they had about three inches of water sitting in their basement.
Things could always be worse.
And, like, who needs to save money, anyway? It's not as if we live in an apocalyptically cruel and selfish society where a single medical emergency could bankrupt us and cause us to lose our house. And retirement is a pipe dream for our generation so we're already planning on working until the day we die. Why not spend all of our money making repairs on a house that somehow the previous owners got away with not making and which seem to all be coming due at the same time for us, right now.
I mean, it's the American Dream, right?
Hashtag: I'm trying to love this house but this house is making it haaaaaard and I so I basically loathe it and find I am always waiting for the next thing to break. You might think that maybe there's nothing else that could possibly go wrong. But you'd only think that because you're a complete buffoon (sorry, not sorry). Do not let the house lull you into a false sense of security with its picturesque Tudor-style facade and beautiful windows showcasing Georgia's verdant landscapes. There is a laundry list of things that could go wrong at any given moment.
Posted by Nancy at 1:38 AM