For FHE, Andrew decided it was high time the kids got a lecture reminding them of our COVID family motto: We are going to ROT together. Respect. Obedience. Tolerance.

So the kids got a lecture over dinner. I'm not sure it helped because today we ran into the same problem we've been having of me asking the (younger) kids to do things repeatedly and them completely ignoring me until Andrew opens his office door and then they suddenly spring into action. But it was worth a shot.

(And if they don't watch it, I'll get so tired of their behaviour that I'll just start the school year for next year...)

Anyway, when I felt that the lecture had drawn on long enough, I said, "Okay, so we did Dad's idea for family night, but I had a different, funner idea in mind..."

The kids immediately wanted to know what it was.

"Well, we need to finish eating, clean up from dinner, go on a walk, and then...I thought we could all go down to the basement and..."

"Clean it?" Rachel moaned. "How is that any more fun than Dad's idea. Like, I'd rather endure another lecture than clean the basement tonight..."

"Build a LEGO train together?" I suggested. "I thought we could each make a train car that represents us and then make a little stop motion movie of our train rolling along."

The kids agreed that this idea actually did sound like quite a lot of fun, so that's just what we did. It took us far too long—we were still finishing our creations at 9:00—and Alexander ended up having a complete meltdown about having to go to bed before we made the movie, but really I think it was better that we made the movie after we put the youngest three to bed. At any rate it was a lot less chaotic.

Here's our finished movie (which I'm sure I'll talk more about later):

Rachel and Miriam stayed up to help create our "studio" and move our pieces around between shots. Here are a few "behind the scenes" moments...

Miriam added some birds to the background (I drew the beautiful cactus and Rachel made the sun): 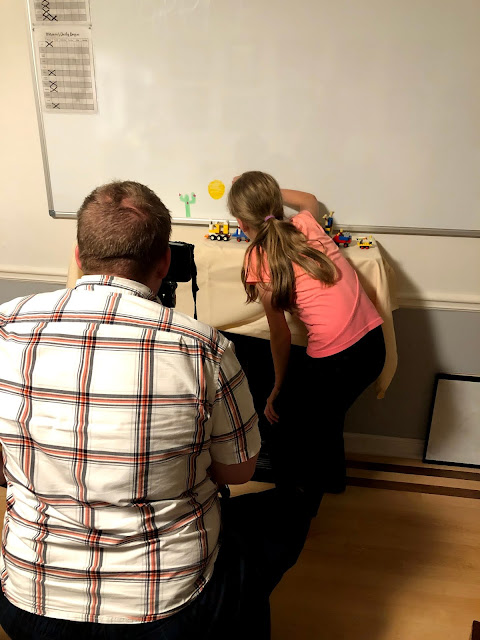 And here's Andrew setting up the shot: 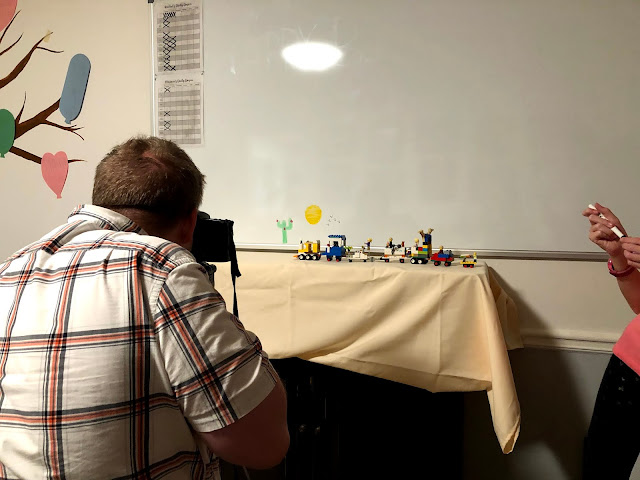 It was a fun little project...announcing a much bigger project...

When I found out about our little...project...all I could think of was of a railway pump car, like in that scene from O Brother Where Art Thou, where the train goes past and then the blind man comes by on the pump car. Like that, right down to the confused facial expressions they make as they stare down the track trying to figure out what that squeaky noise is.

Alexander was the caboose.

That was the plan. A pump car baby wasn't part of the plan.

Guys, I gave away our crib.

Because what did we need a crib for, anyway? We were moving on to other stages of life...

Little did we know...I was already pregnant. Surprise!

As I mentioned, I'm sure I'll write more about this, but it's been quite an emotional couple of months for me as I've tried to wrap my brain around this. It was difficult for me to embrace the idea of being "finished," but it also felt logical.

Five kids is a lot and we've done a lot with five kids.

We're only getting older.

I have grad school to worry about.

Babies are wonderful and all, but being pregnant isn't precisely, like, fun.

The kids are all—for the most part—sleeping through the night. They're all mostly functional people, which is cool. They play games and do chores and hold up their own heads and stuff.

We were dreaming of taking a road trip and not having to worry about infants diapers or potty-training toddlers along the way—they'd all just be fully continent people, which makes life so much easier.

Even though it was hard for me to leave the baby stage behind, I was working through it.

And now here we are.

I'm not upset about it (though it's true that I've cried) because I really do love babies and children and am thrilled to get to do this all over again (but it did take me time to get there; the kids, however, were all jumping up and down screaming with absolute joy when we told them (about a month ago; I should have filmed it, but didn't)). It does feel like a wild complication to the plans we'd laid for the future. But future plans seldom work out the exact way one plans, do they? But usually however they work out ends up being the right way for things to go (one hopes).

My mom sent a book for the kids a little while ago and I've been reading it to them before bed. It's called The Explorers: The Door in the Alley by Adrienne Kress, a Canadian author, and there was a line in that book that helped me find peace with the unexpectedness of our impending addition:

And I suppose that is a good life lesson. There is always more...and it's not often what we expect...but how does that saying go?

The more the merrier!