Technically yesterday wasn't a full snow day so we don't have to make it up, but today is still our second snow day of the year. Tomorrow will be our third. And I have a feeling we can just kiss a full week of spring break goodbye because I doubt we'll make it to school this week.

Not only do they cancel school for snow down here. They also cancel it for cold.

Which, I mean, fine. Kids might not have appropriate gear and freezing at the bus stop isn't terribly fun. But, like...I really shouldn't get started on this subject.

Besides, I'm flying solo this week so I don't really mind not having to deal with the morning rush and the freezing cold bus stop on my own. So far it hasn't been too bad, probably because our awesome ward has taken pity on poor, pregnant, and sick me (because I finally got that cold my entire family had last week—ugh!). We had lasagna for dinner on Monday (thanks, Alisyn!) and still have half a pan we can eat another night.

The kids have been fairly good. I thought that by letting them play out in the snow for two hours before bed and then letting them watch half of Annie until super late last night that they'd at least sleep in this morning, but they didn't.

Benjamin woke up first but I told him to lie down and be quiet because no one else was up yet. About half an hour later Rachel ran into my room screaming, "Where's Miriam?!"

So I got up and raced to their bedroom with Rachel and there was Miriam, sleeping peacefully with her head on her pillow and the blankets up to her waist.

"Oh," Rachel said. "Huh. I checked and she was gone. She must have blended in with the bed or something."

No one was going to sleep after that incident, although we did try. Or at least I did. But somehow Miriam magically woke up (Rachel insists she woke up independently; Miriam insists Rachel woke her up) and the girls got up for breakfast and then Benjamin was like, "Well, if they're up..."

The girls across the street were already up and sledding down their driveway (their mother wasn't impressed with how early they'd gotten up, either) so my kids rushed through breakfast so that they could play outside as well. The girls are both fully capable of dressing themselves to go outside—zippers and everything—so all I had to do was bundle up Benjamin and make sure the girls had their ears covered.

Benjamin doesn't have appropriate snow gear...yet. Last year a friend gave us some 3T snow pants but I completely forgot about them until I went to pull out Rachel's snow pants yesterday and then I was like, "Oh, look at these!"

We held them up to Miriam and then we held them up to Benjamin; ultimately we decided that they'd be better on Miriam so she got the real snow pants and Benjamin got the makeshift snow pants. Not only did they go up to his ears almost, but who knows how many plastic bags I'd need to fashion snow pants for Miriam?!

I used the same pattern I used last year, with regular clothes under footie-jammies, followed by a layer of plastic bags, followed by another pair (or two) of pants), except this year I had to use two extra bags to make the legs long enough. I was actually pretty excited about that because it was proof that this child is growing. I mean, he outgrew shopping bags—what further evidence could anyone want?

He was pretty excited about his snow pants. 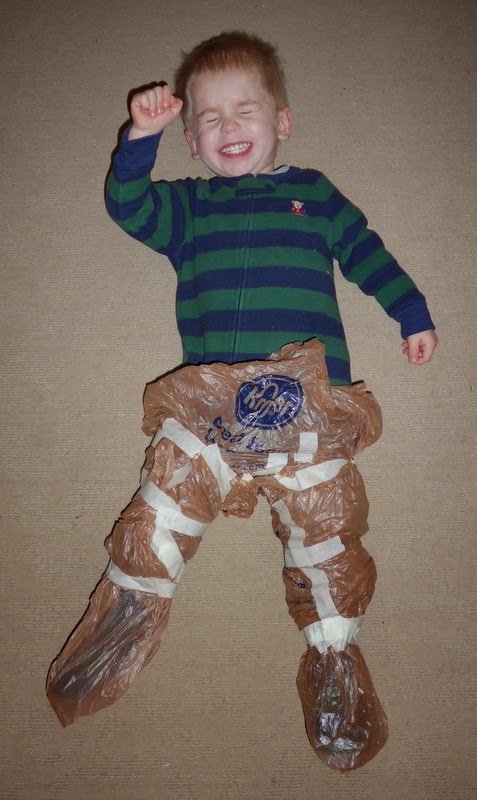 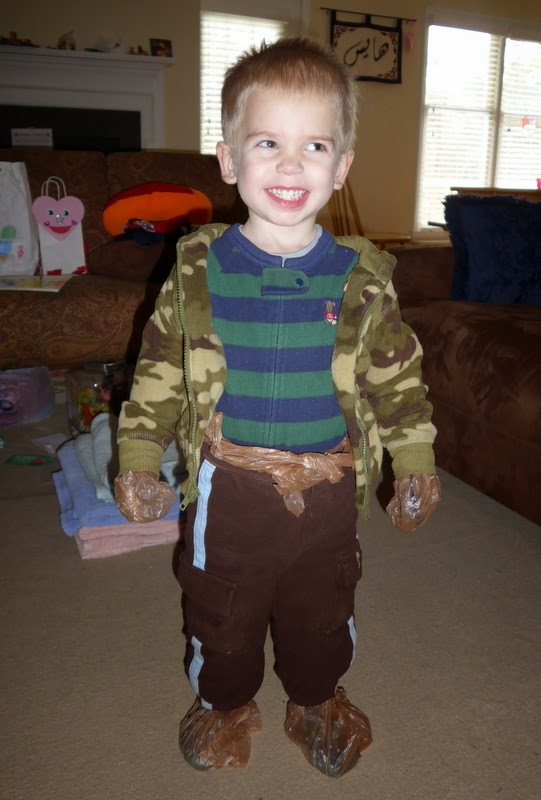 Last year we only had one pair of waterproof mittens to share between the three kids. We have an overabundance of thin gloves and fleece mittens but those get soaked within minutes so we just went through a lot of gloves last year. They were drying all over the house!

Here he is fully decked out: 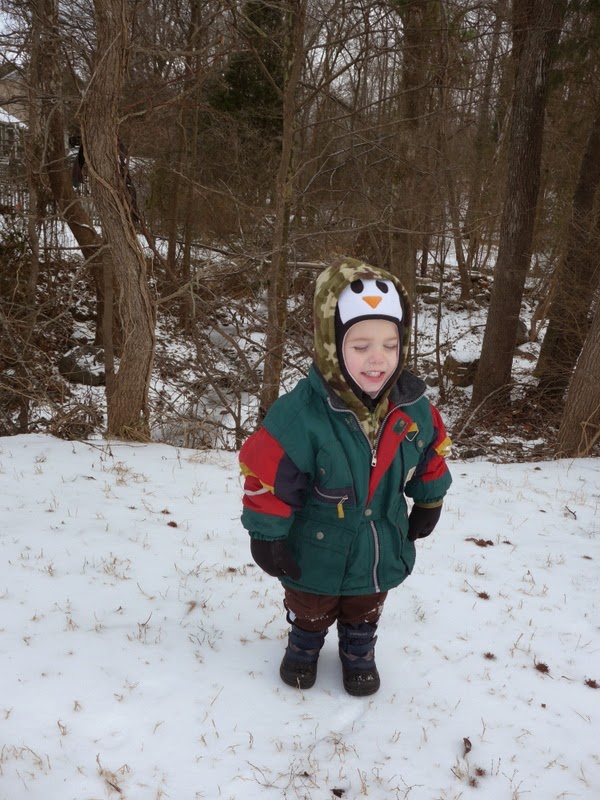 He stayed warm and dry and you can't even tell that he's got a layer of ragamuffin underneath!

We went on a little walk together while the girls were busy sledding down the steep yards across the street. Benjamin's not really into sledding and he kept getting in the way. After our walk the neighbourhood quieted down a bit when one family went to sled at their church. We went with them last year, but this year I didn't want to (a) drive there and (b) sit out in the cold for hours on end.

So Benjamin and I went inside and left the girls outside until lunch. There were plenty of other children left for them to play with outside.

After lunch Benjamin and I went down for a nap and the girls played inside. They redid their fairy hotel (it's been an ongoing, ever-evolving project for years now): 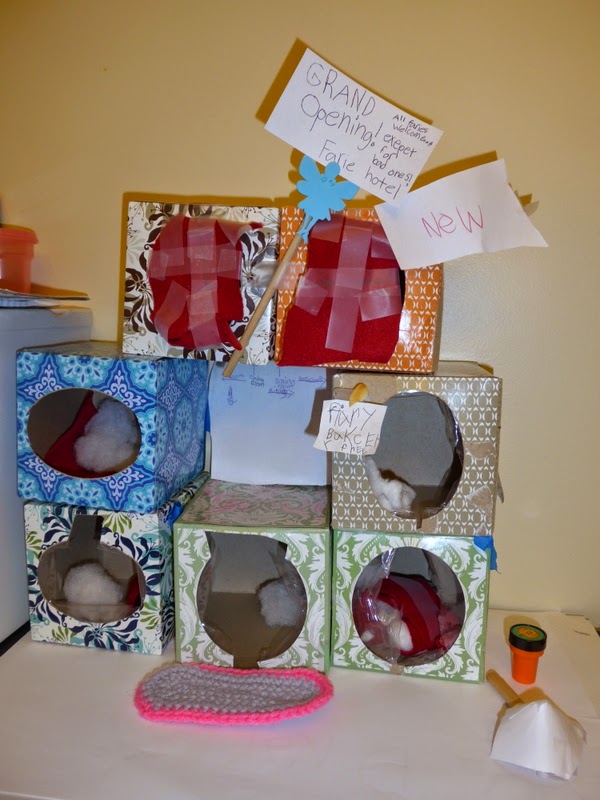 They also played with LEGO: 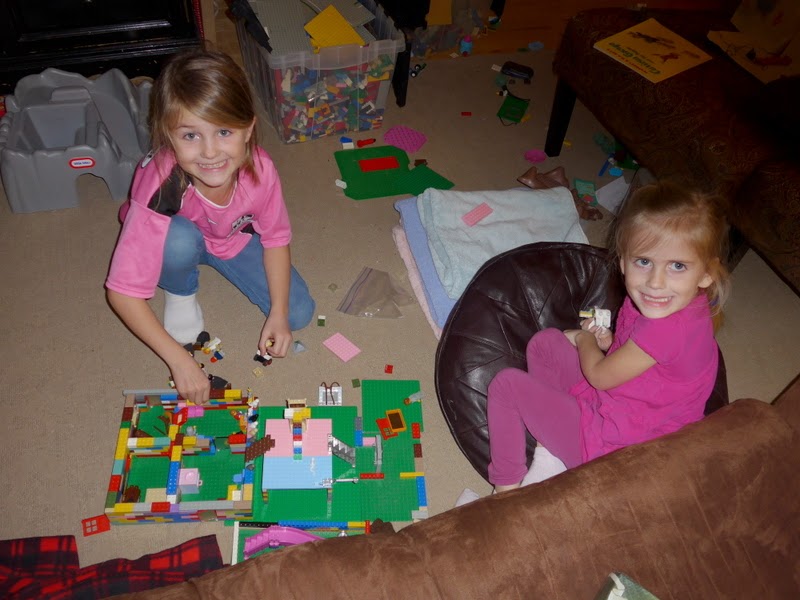 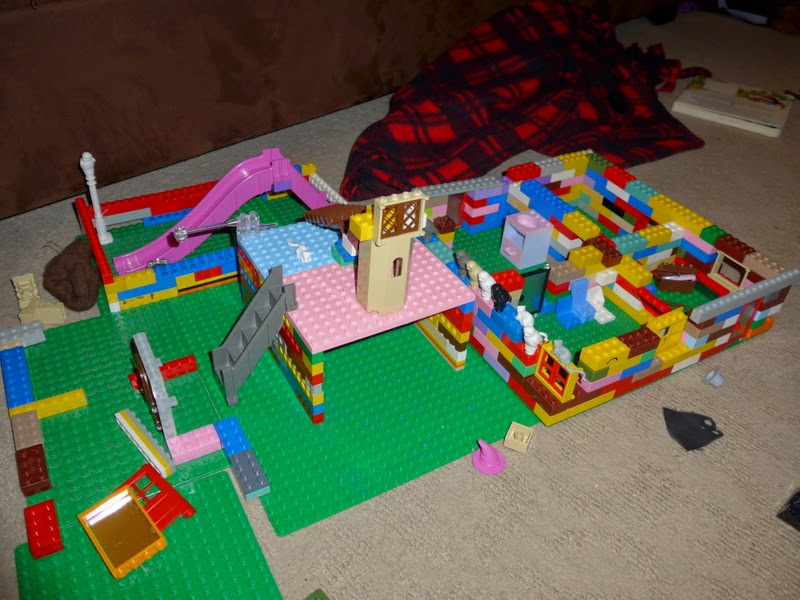 I believe this is a wing of Hogwarts—multiple rooms, a second floor, secret passages. It's got everything. And it kept them occupied until dinner.

We had pot stickers because the kids were dying to have them. On Monday morning Andrew went to school first thing in the morning, so he was already gone when Miriam woke up. She ran into the bedroom and shook me awake.

"Mom! Mom!" she whispered. "Is Dad gone? Like gone gone? Can we have pot stickers for dinner tonight? Can we, please?"

"Then can we have pot stickers? Please, Mom? Please?"

I told her we could. But then we had lasagna instead and she was pretty bummed. So we had pot stickers tonight. They're from Costco and are stuffed with chicken and vegetables, so Andrew won't touch them. But they're really good.

After dinner I told the girls that if they helped clean up the house we could finish Annie. They've been singing songs from it all day long and were excited to watch the ending, but they also weren't working together very well, so I found the soundtrack on Spotify and played the song "It's a Hard Knock Life." I lip-synched the beginning part where Miss Hannigan says, "And if this floor don't shine like the top of the Chrysler Building, your backsides will. Y'understand?"

This set them giggling, but it worked! They had the house spic-and-span (or thereabouts) by the time I had finished doing the dishes. They were dancing and singing and cleaning and probably pretending to be whichever orphan girl was their favourite.

So that was basically our evening, but while we're on the topic of cute stories, I have to share one more about Benjamin because I forgot to yesterday.

While we were out sledding in the dark, Benjamin toddled over to me, wrapped his arms around my legs, and looked up at me and, by extension, the stars (or he looked up the stars and, by default, me).

"Mommy, why no stars?" he asked innocently.

It was the most adorable question. I realize it's clear evidence we've entered the why-stage, but his little voice was just so sweet and curious. I explained that the stars were still there but that we couldn't see them because it was too cloudy. It's fun to see him try to figure out the world around him.
Posted by Nancy at 10:13 PM