Easter is late this year so I figured we'd have time to experiment with pysanky eggs before then. Josie sent us a kit—golly!—last April (?!) and it's been sitting on my bookshelf, taunting me, ever since. I honestly didn't think it had been a year since she sent it but the date on the package is 4/19/2021.
But I had only just found out I was expecting Phoebe around that time last year, so the idea of engaging the children in such an involved project simply...wasn't going to happen then. This year I have no such excuse. Besides, you know, the living, breathing Phoebe that we have.
Rachel rocked her to sleep while Miriam and I experimented how, precisely, to empty eggs, which is the first step (or last step) of pysanky (depending on how you want to make them). 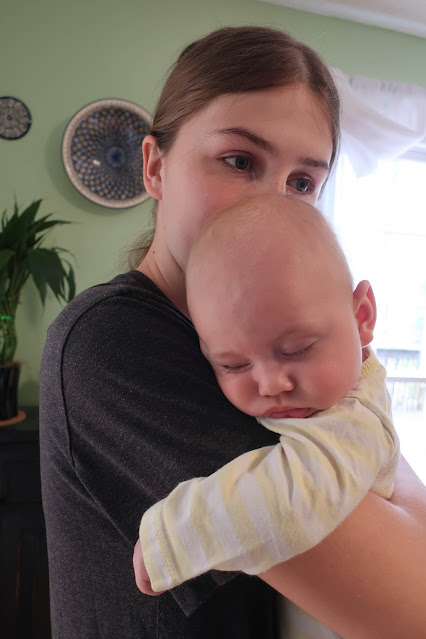 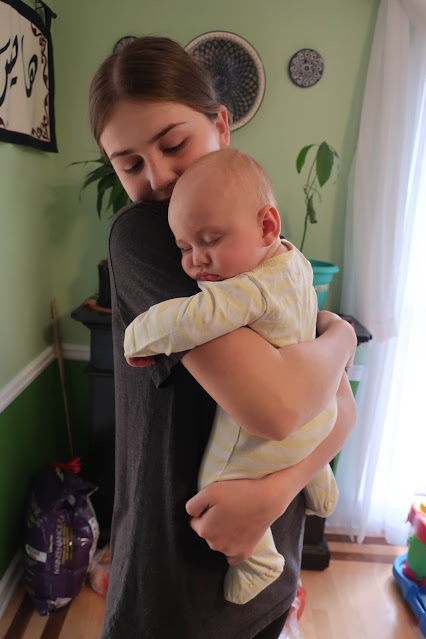 Our tools of choice were tape, thumbtacks, and toothpicks. 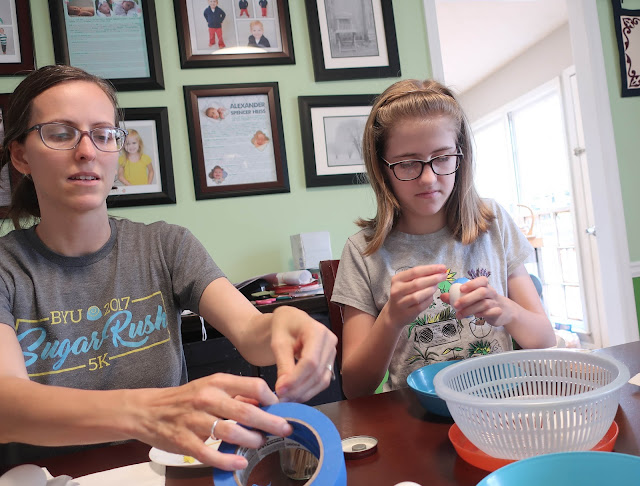 Blowing out the eggs was a lot harder than we thought, with the albumen being the most difficult part. After that's out the yolk comes out quite easily. I ended up blowing out one egg completely, as well as the whites of three other eggs (Alexander's, Zoë's, and Benjamin's). I let them all have the pleasure of blowing out the yolk. Rachel and Miriam managed to empty their eggs, themselves.
I think later we'll try a bicycle pump (I saw someone do it on YouTube) and see how that goes because—boy, howdy!—it was difficult! 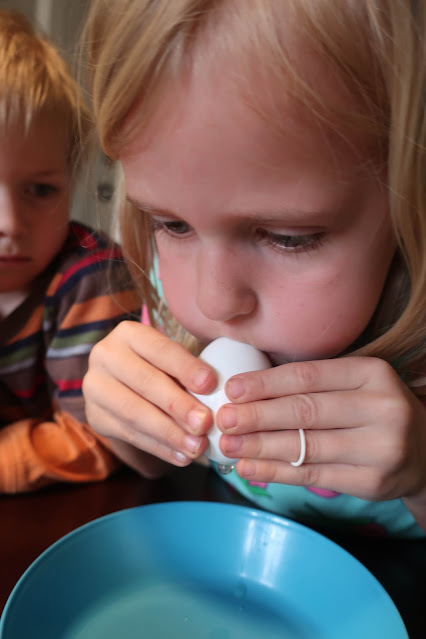 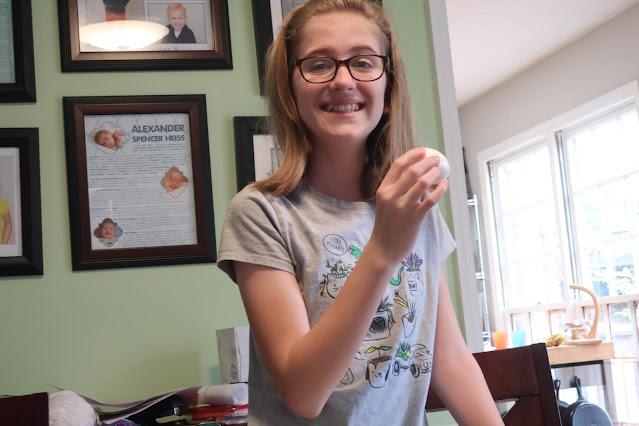 Rachel did not like putting her mouth on the egg (which really isn't a shock to me). 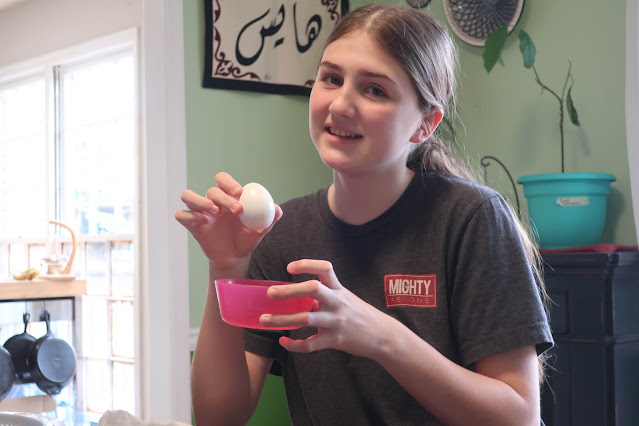 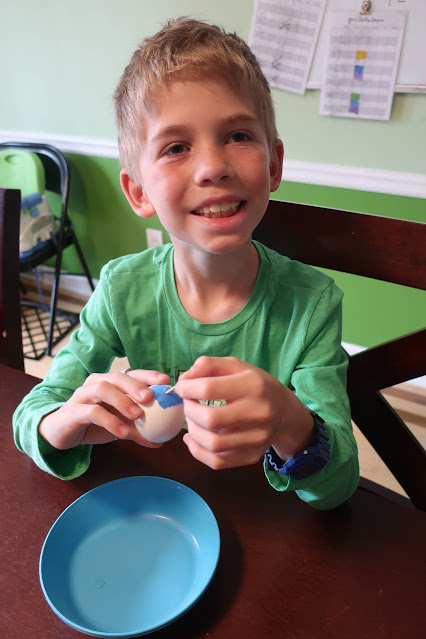 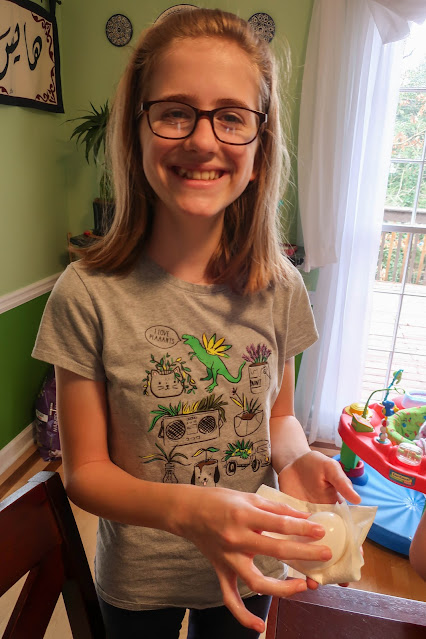 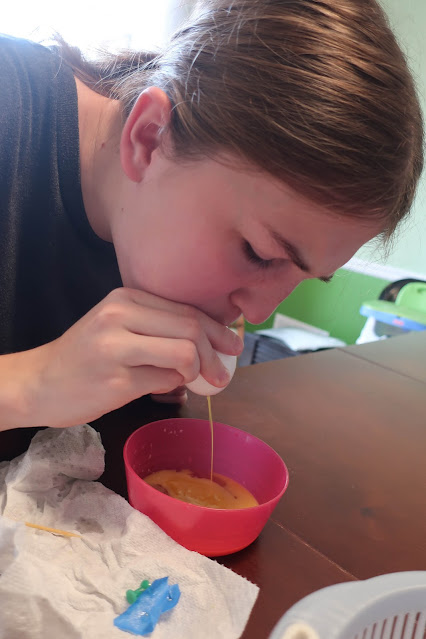 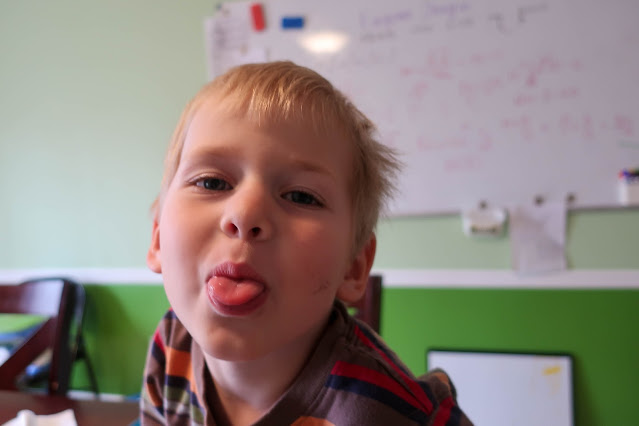 Benjamin took the camera while he was waiting for me to help him start his egg. He took some pretty good pictures of everyone (and has become interested in developing his photography skills). 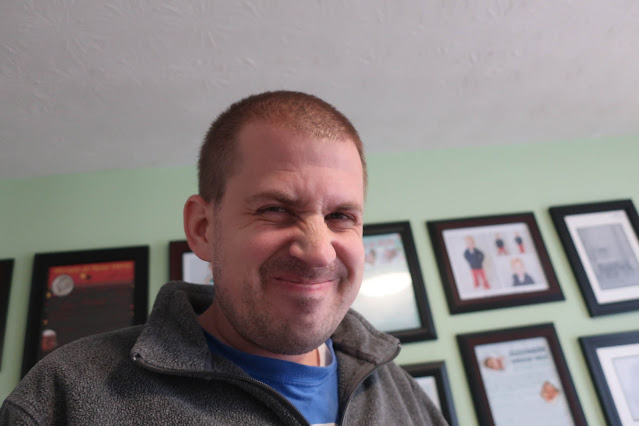 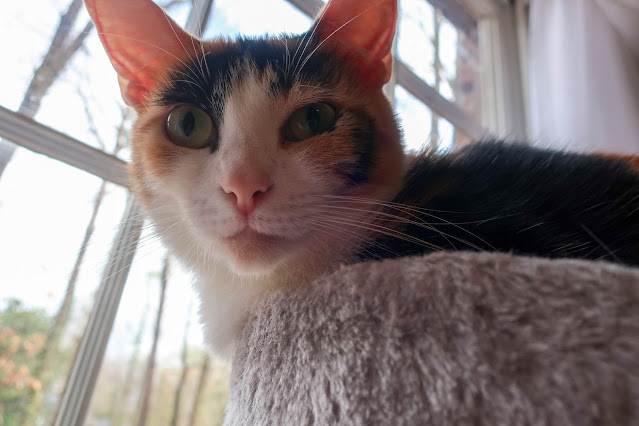 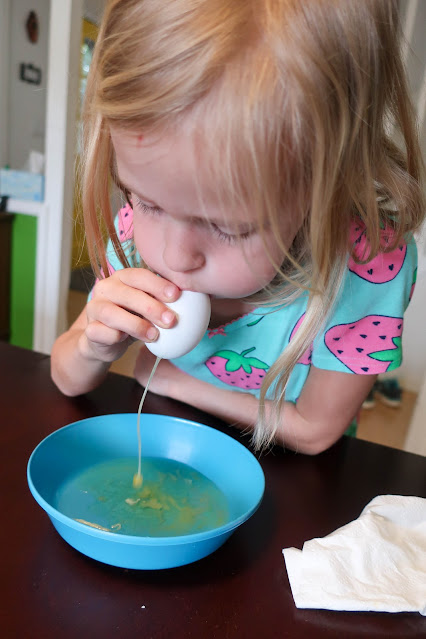 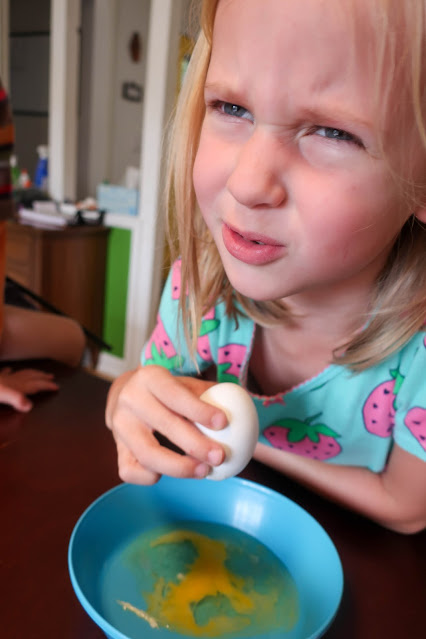 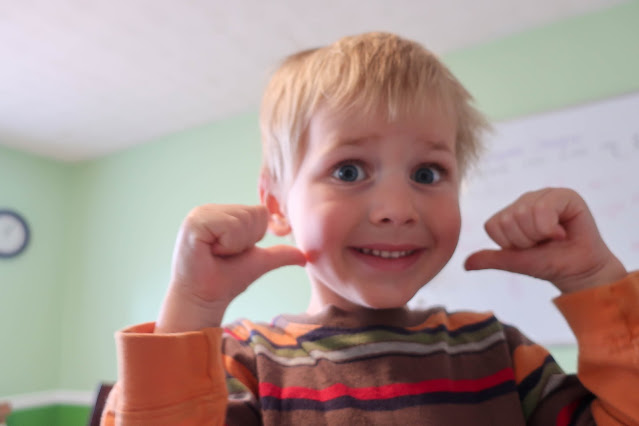 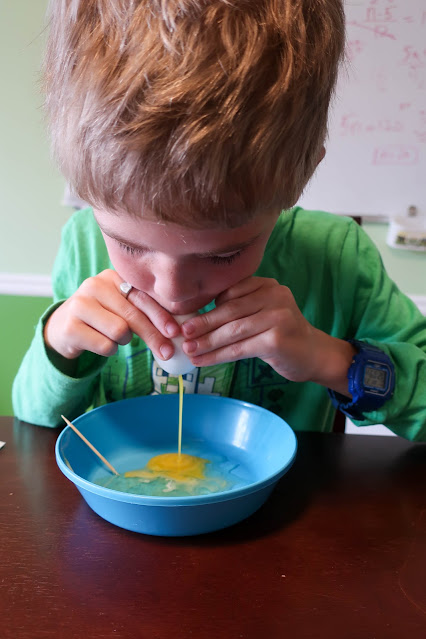 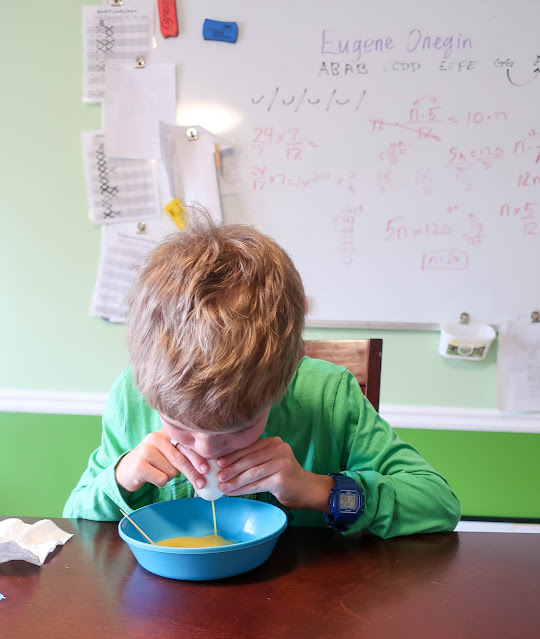 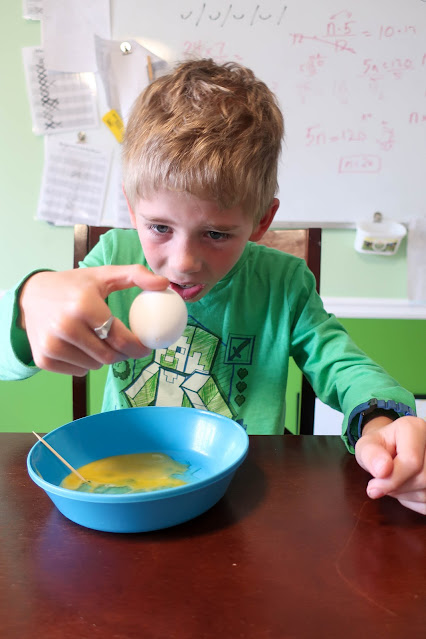 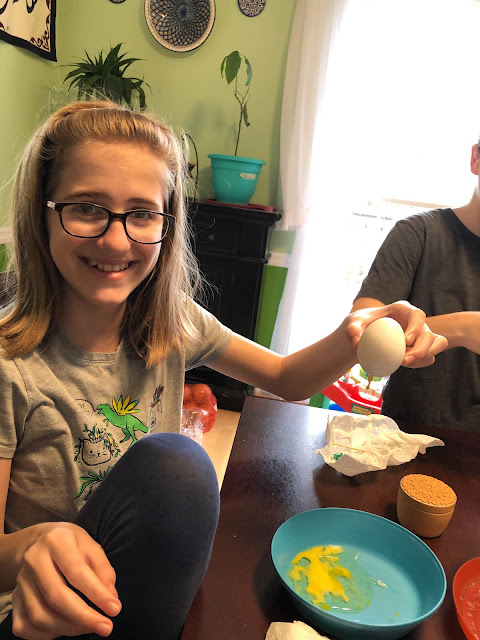 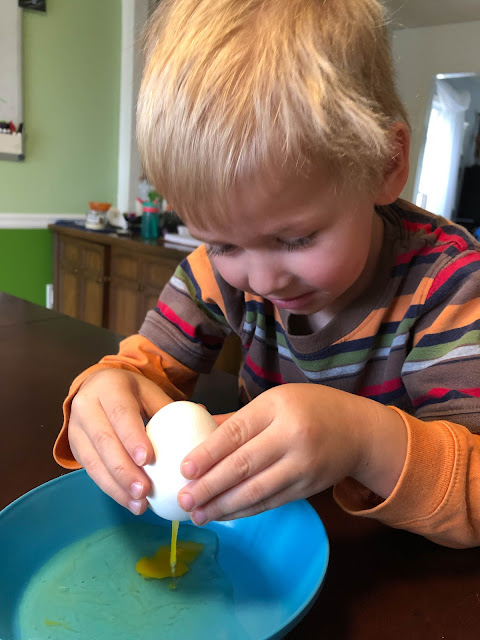 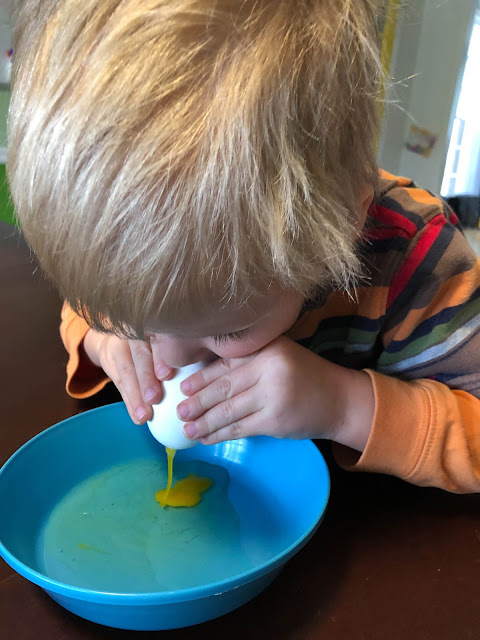 I wrote a poem about our experience yesterday. I'm in the middle of "attending" (virtually) the AWP conference (Association of Writers and Writing Programs) and there was a session on "hybrid" poems. One of the panelists (Kimiko Hahn) suggested writing about a theme you tend to return to a lot in your writing and address it with five separate "things," only two of which can be personal. At least, I think that's what she said. I was watching this with a million little interruptions. Her example poem included a quote from Shakespeare as well as a quote from Newsweek. So, anyway, here's mine:
Addled
Slowly but firmly I plunge a thumb-
tack into the egg until *crack* the
shell relents to my point. Surgically, then,
I unbend a paperclip, force it through
that decimal, jog it up and down
to pierce the yolk before shaking the egg,
scrambling chalaza, vitellus, albumen.
I don’t think about babies until gingerly
I press the egg to my lips and blow—hard.
My embouchure is as weak as my pelvic floor;
four months postpartum, I almost pee as I try
to evict that would-be chick, to prepare for pysanky.
Desperate to control wild geese populations,
professional egg addlers search for nests,
shake eggs until they slosh—full
of unviable deoxyribo-soup. It’s vital
these catch-all canopic jars are returned
so the geese don't try for another clutch.
Desperate for control, “the self-induced abortion
had been attempted with a coat hanger inserted
into the cervical os some time in the 3 days
before admission to the hospital. The reason
for the attempt was lack of money for
a therapeutic abortion” (PubMed, 1993).
Using a chisel & long iron hook,
Egyptian embalmers punched holes
through skulls to liquify, addle & drain
obsolete brains. My mommy brain
feels much the same. My belly’s still soft.
My insides—loose, slinking, sliding
back into place. I feel eviscerated,
excerebrated—a chicken with its
head cut off—addled & drained.
I gather my walking canopic jars—
my children, my chicks—and teach
them the trick to purging the pent-up
potential from each egg before we dye.
We'll get to the actual egg-dying part later. After we blow a few more eggs to have on reserve because I have a hunch we might break an egg or two while we're learning how to do this. I have to admit I'm a little nervous for the design part; we'll have to study how to layer the colours and so forth.
Posted by Nancy at 11:18 PM