They come, they eat, they leave...

My sister Kelli has been trying to visit us since June 2020.

I made her postpone her trip, though, because the world felt too upside down right then. It still feels upside down as we're approaching two years of this thing and as vigilant as we aim to be...it's getting really hard to maintain...so when Kelli asked if she could visit, I said yes.

Then I spent the next several months feeling absolutely sick over the decision as Delta popped up, etc.

But she came at the end of February, bringing along with her Rosie and Ireland, which was so much fun! They were just here for a little weekend visit and it rained virtually the whole time, but that was alright because with a pandemic and two little babies our time was probably best spent at home, anyway.

We told the kids that my sister was coming but kept Rosie and Ireland a surprise. Kelli came bearing and entire suitcase full of gifts for the kids (including, but not limited to a ginormous stuffed unicorn for Zoë (pictures of that later) and matching outfits for Phoebe and Irie). They got in rather late on Thursday night so before retiring for the evening Rosie and I selected outfits for the next day and set our trap...

In the morning, the kids got up and found Auntie K, who slept on the couch in the TV room. I had told the kids that she would be up in Zoë's room so that they would help me get that room ready for company (stripping the bed to wash the sheets, etc) and then after the kids went to bed I made up a bed in the TV for Kelli. So the kids were not expecting to see her down there. They were happy to see her, however.

And then when I got up and came downstairs with Phoebe, Rosie followed me down with Ireland dressed exactly the same way and...the kids were absolutely shocked!

The older girls got up a bit later, so when Rachel wandered into the dining room for breakfast and saw Kelli spotting Irie (who was sitting on the table, something Phoebe can't do yet) she gasped, "What are you doing with the baby?!"

Then she noticed me standing on the other side of the room holding Phoebe, who I'll remind you, was dressed the same way and screamed, "WHY ARE THERE SO MANY BABIES?!"

It was a hilariously wonderful prank.

Here are too many pictures of the babies in their matching outfits: 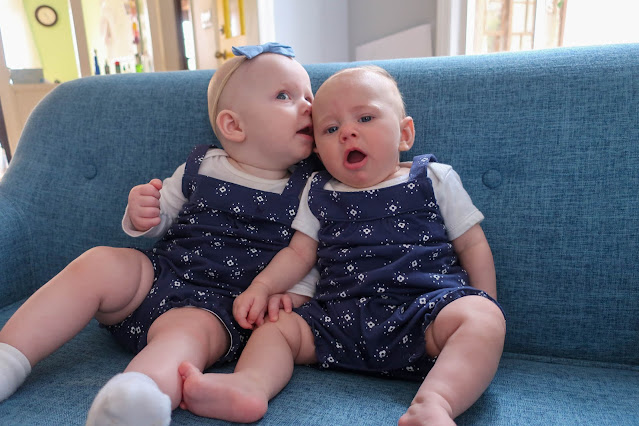 Irie is learning how to give kisses and really liked kissing Phoebe. It wasn't unusual to find Phoebe with a big lick mark in her hair this past weekend! 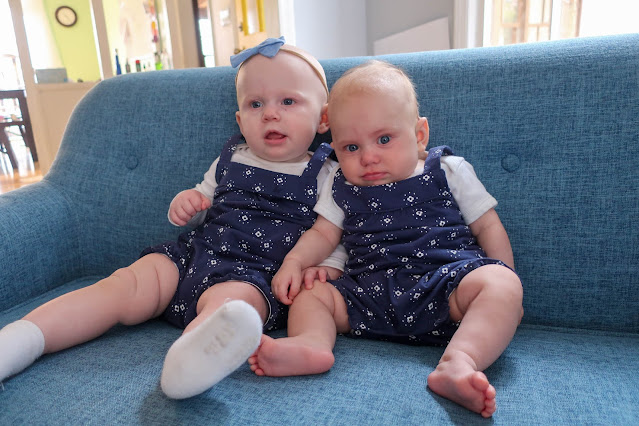 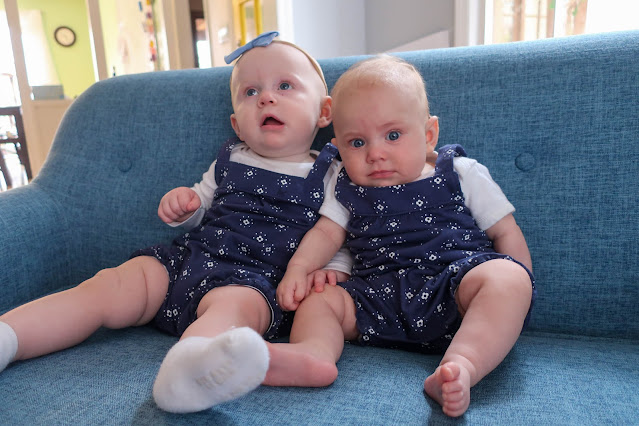 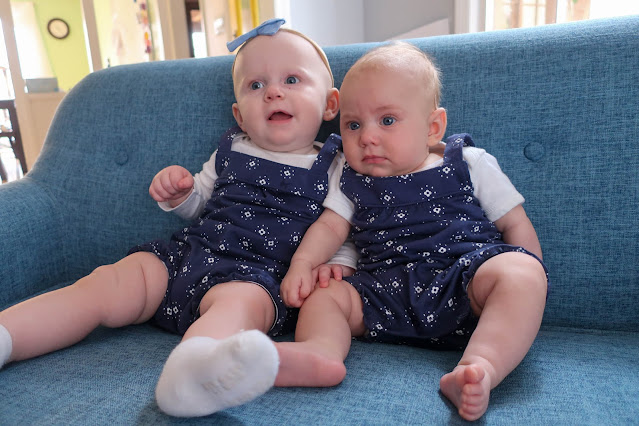 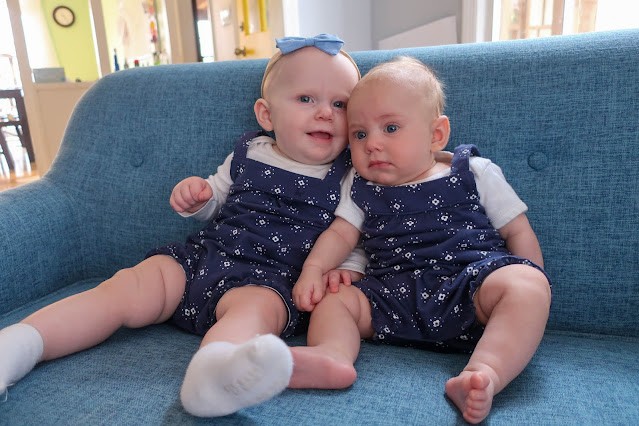 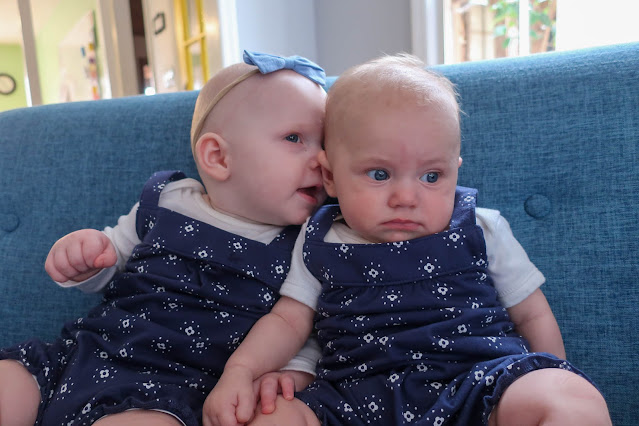 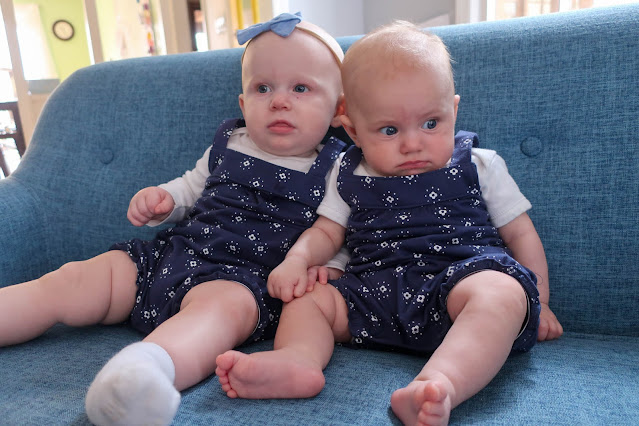 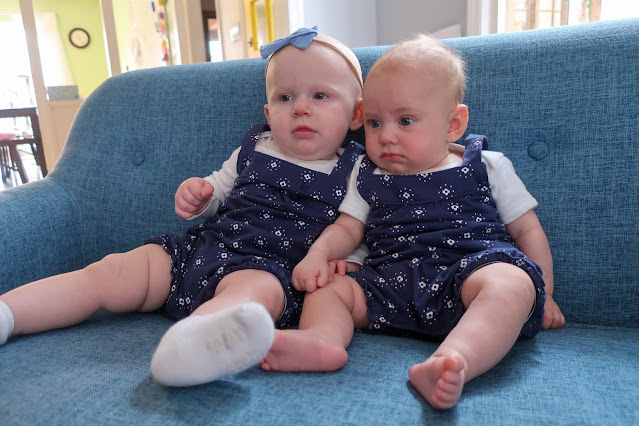 Here's Rosie and I holding our babies: 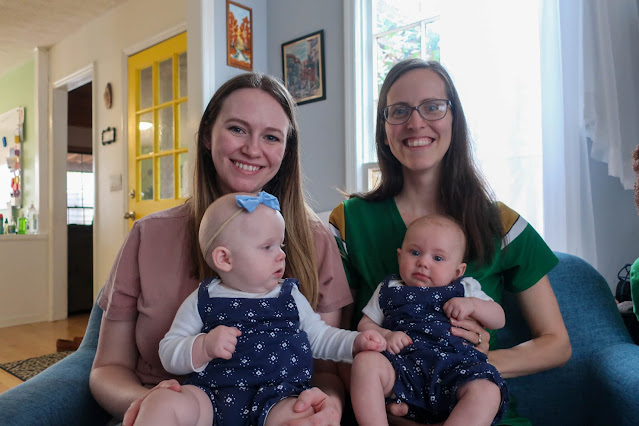 That's a weird sentence to type out because I remember holding Rosie when she was this age (and she said she has memories of me tossing her up in the air, as Miriam was so fond of tossing Irie (though she would have been much older for those memories)). Still, Rosie and I are closer in age than Miriam and Irie are. We're also closer in age than Rachel and Phoebe are!
The cousins in this picture are Rosie and Phoebe, but Irie and Phoebe will probably grow up feeling like cousins.
Here's Kelli with Phoebe: 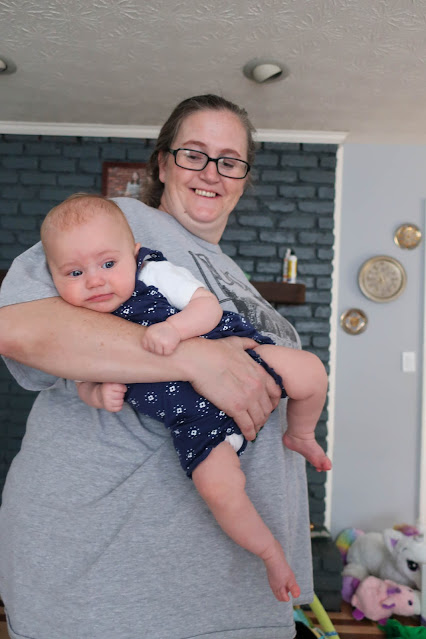 And Rosie with Phoebe: 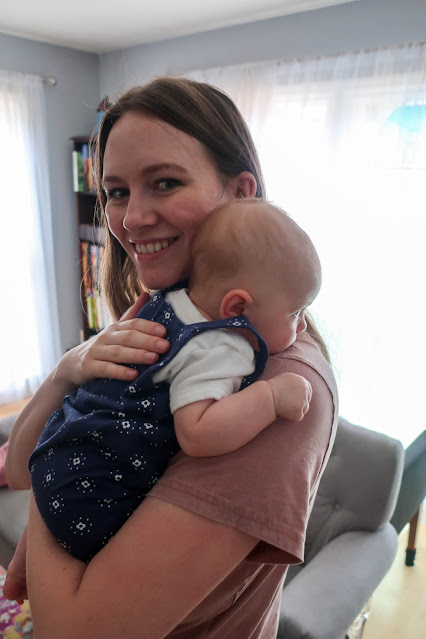 And here I am holding both babies: 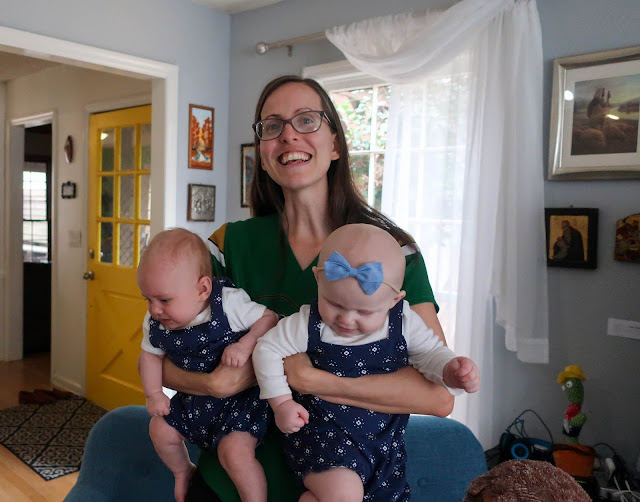 And here's Miriam with Irie and Rachel with Phoebe: 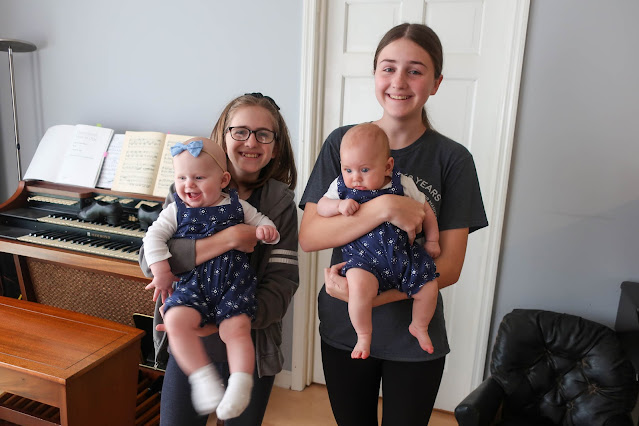 In retrospect we probably should have handed Irie to Rachel and Phoebe to Miriam, because Irie looks ginormous in Miriam's arms!
I'm going to skip the middle of their visit (and get back to that later) while I give you some final pictures of their visit. Here are some of the kids on Sunday evening (with Phoebe and Irie once again in matching outfits)... 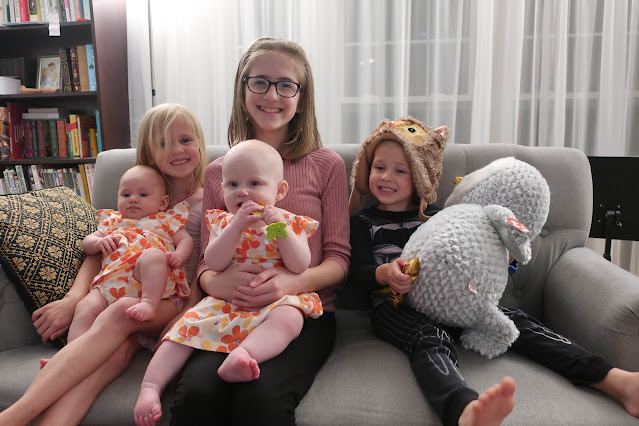 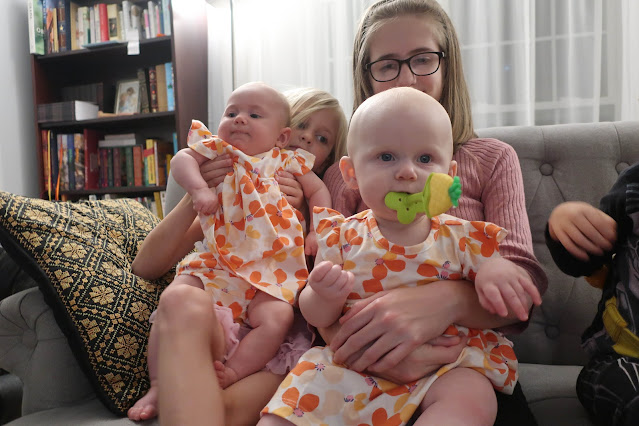 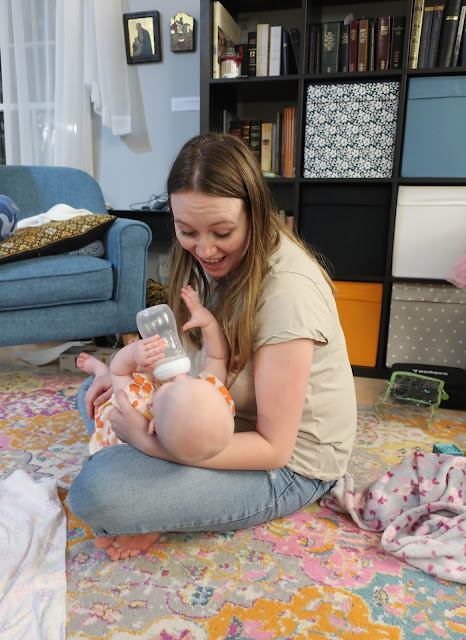 And here's Kelli juggling both babies: 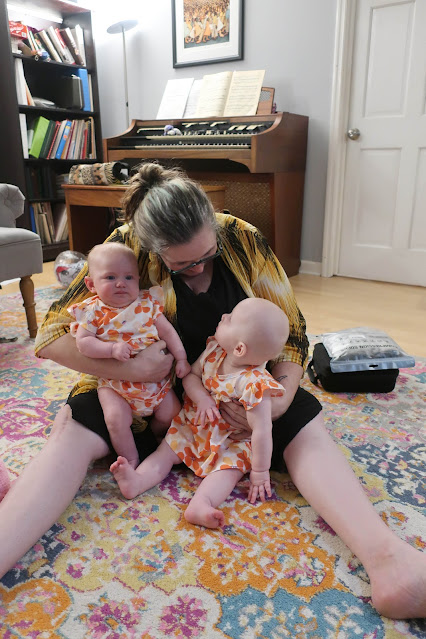 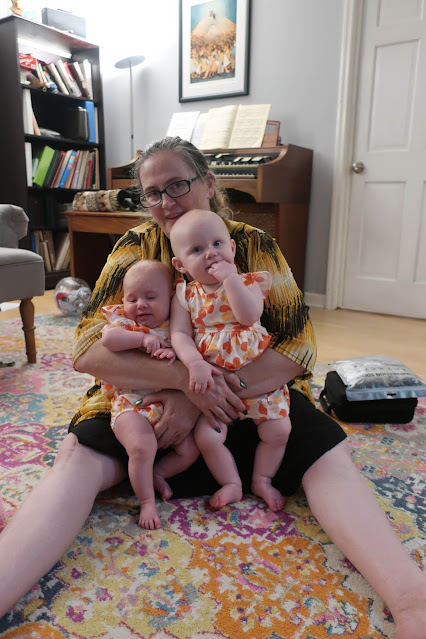 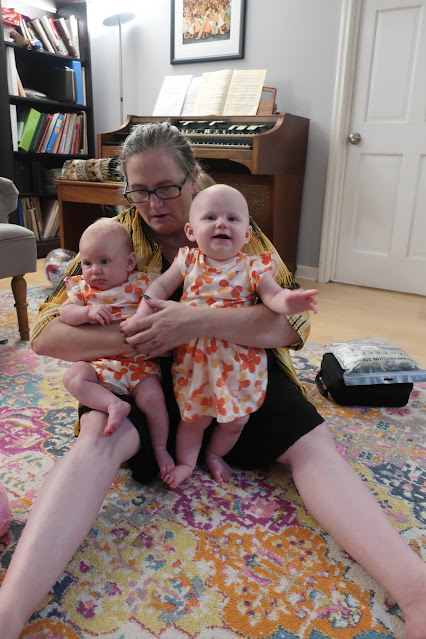 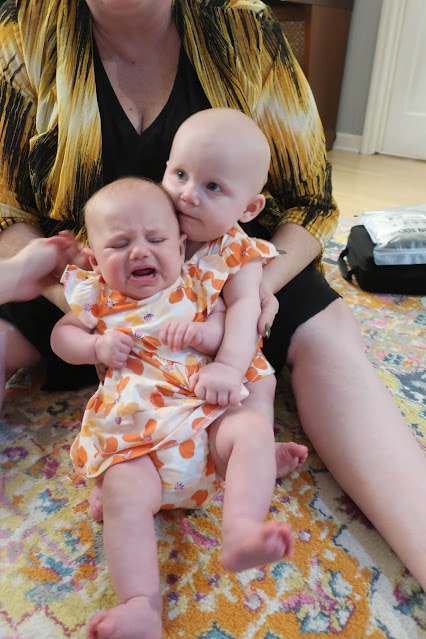 Here's a group shot of everyone just before our visitors departed: 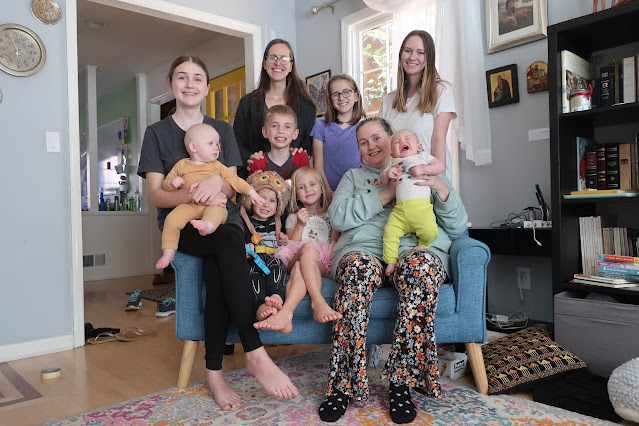 Andrew's not in it because he had to leave early to sign some closing documents for his dad's new house...which is just around the corner from our house—surprise! It's wild to think Grandpa will be here in just a few days! We fit quite a few things into such a short month. February was filled with house hunting and all sorts of fun activities!

Anyway, we didn't think to take a picture before Andrew left so it's just us, gathered in my messy music room.

And here's a shot of Rachel and Rosie holding Ireland and Phoebe, respectively: 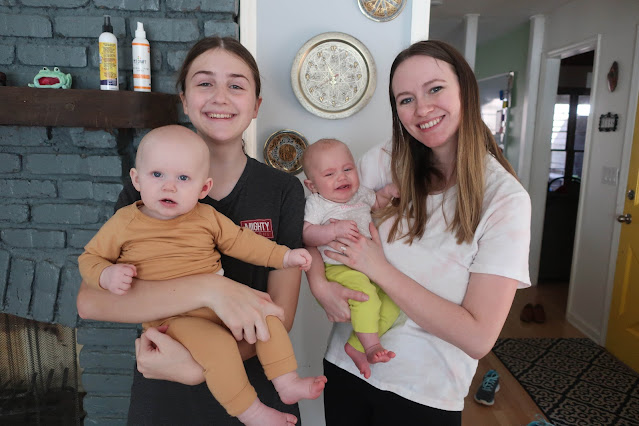 Ireland is, on the whole, a much less fussy baby than Phoebe (but that's not really a surprise given that Phoebe is one of my babies). I think Rachel and Rosie share some similar features; it was fun to see these two together.
I will do my best to get to the middle of the visit in the next few days, but I've been so busy living life—playing all day with the kids and my sister and niece and great-niece and then playing far too late in the evening with the older girls and my sister and Rosie (I didn't know my sister enjoyed card games...she played Hand and Foot with us)—that I'm way behind on a bunch of stuff.
Just kidding. I'm not really behind, per se; I just have a billion deadlines looming large so need to buckle down and get some serious work done!
Posted by Nancy at 9:58 PM