Today Zoë had me look at her "phone" so I could help her fix something in her settings. While I was in there I happened upon a texting thread she had going on with Benjamin, wherein he has sent her several automated messages from Duolingo, telling her about his streaks and inviting her to "join" him (so that he can earn more "gems" in the platform).

She more or less blows off his first message...

Benjamin: I'm on a 7 day streak learning Greek on Duolingo! Join me?

And that's it between the two of them for a full week. No further exchanges. But then she really blows off his second message, which he sent on March 17, and which she didn't respond to until today.

Benjamin: I'm on a 14 day streak learning greek on Duolingo! Join me? 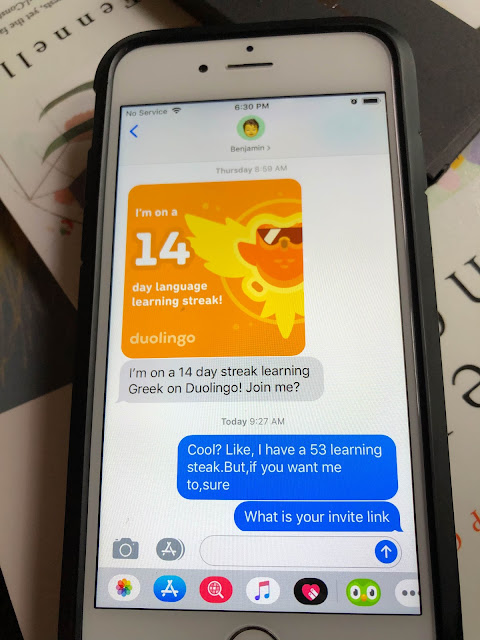 Absolutely a savage takedown, which she seems to realize shortly after sending him that message because she follows it up with a huge congratulatory image and text that says:

But also what the message above says 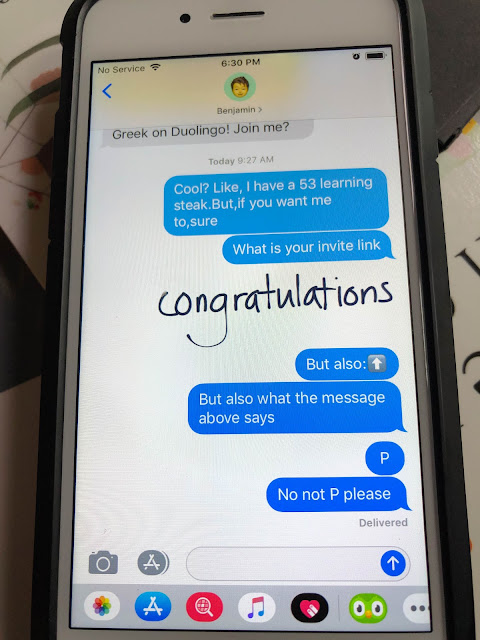 And this struck me as so aptly Zoë. Sometimes she says things without thinking them all the way through (don't we all?), but is more than willing to do the work to fix what she said so it matches her true feelings (which are usually much kinder than her initial blunder may have been).
Losing their streak on Duolingo is a very emotional thing at our house. Unfortunately it's also a somewhat regular occurrence, happening to one child or another at least once a month (especially prone to happening over a weekend, for example, when they're not actively thinking about working on their language skills).
Benjamin recently lost his streak (well, a couple of weeks ago now, obviously) and it was a touchy subject for quite some time (though I think he's just about over it by now...if only Zoë would stop rubbing it in)).
Posted by Nancy at 10:48 PM