The first day of spring

As part of my post-conference wind-down, we went to the park for several hours this afternoon. I'm not sure how long we were there, but it was definitely long enough to get a little sunkissed.

I made the kids run 1.5 miles today. They did well with that, for the most part. And then I unleashed them on the playground while Phoebe napped in her stroller and I did some readings for my classes.

Rachel also did some reading: 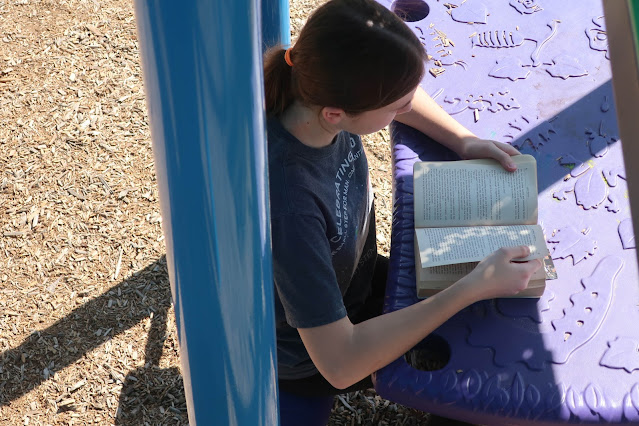 Benjamin took the camera around and snapped some pictures, which was kind of fun because (1) I got to see a bit of how he sees the world and (2) it meant that I was in a few pictures (and that's pretty rare for me). Here's a picture of me giving Phoebe some milk after she woke up from her nap: 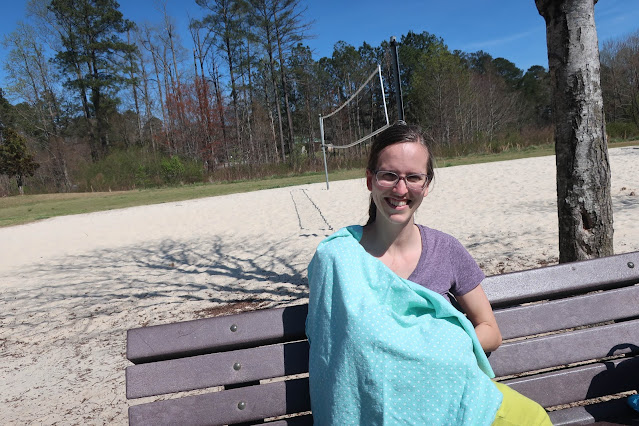 Here's a shot of Rachel reading (with me in the background): 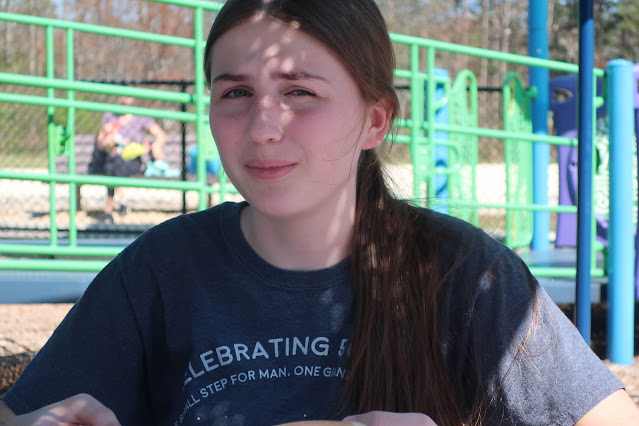 Here's me with Phoebe again: 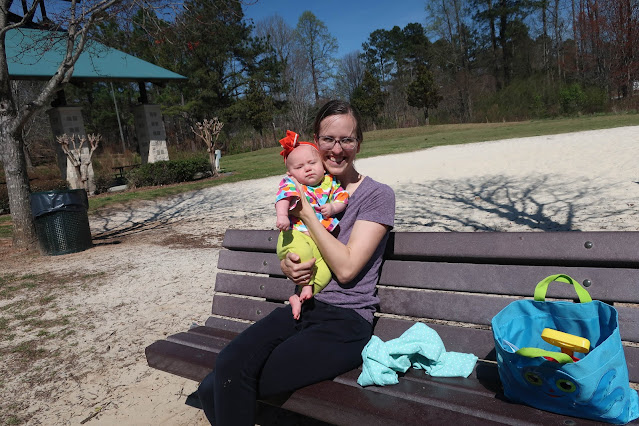 Here's Alexander trying out the monkey bars (with Rachel's assistance): 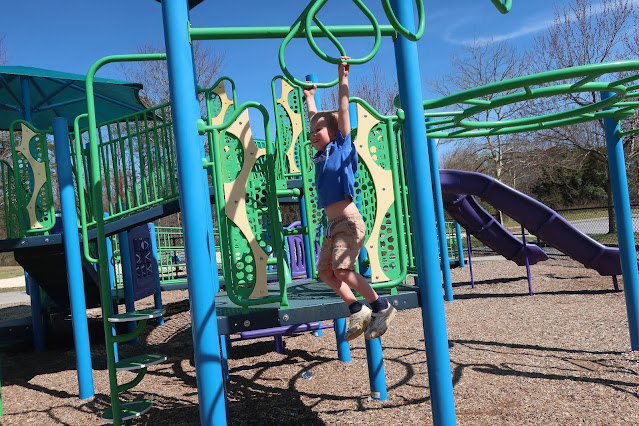 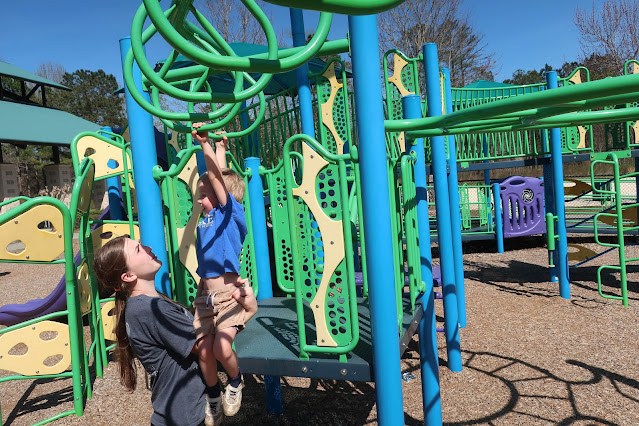 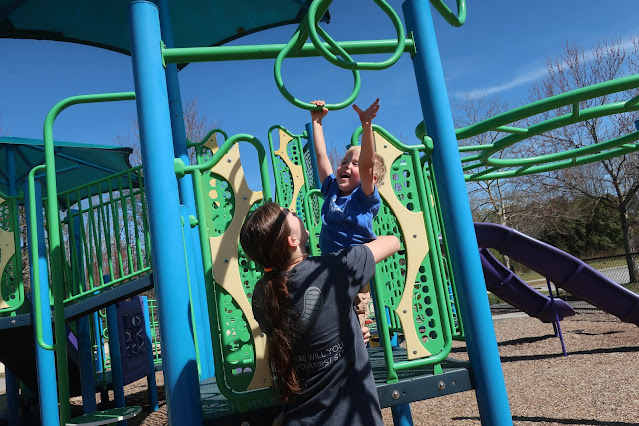 Here's me attacking Phoebe with some kisses to make her giggle: 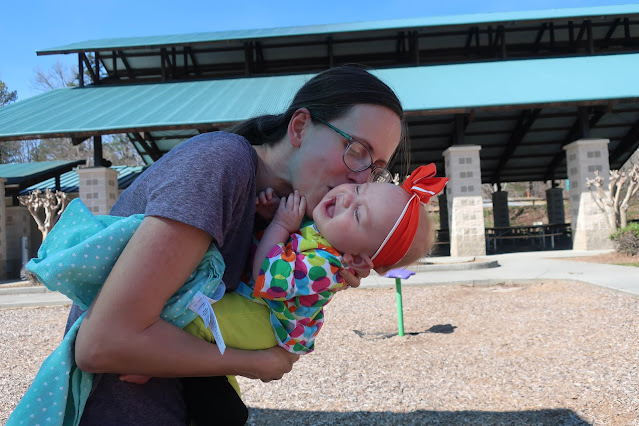 And here's Alexander falling off the end of the slide: 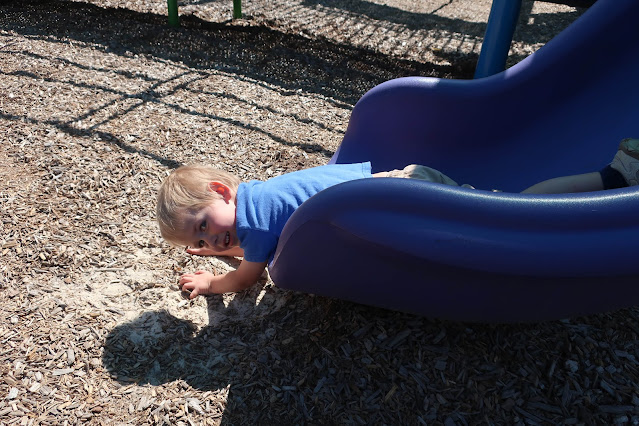 And Zoë running up a ramp: 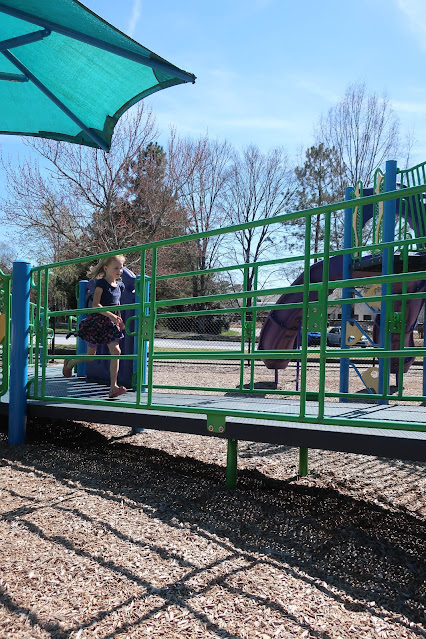 Then Benjamin gave the camera back to me and I took a few pictures of him. I think I took this picture by accident: 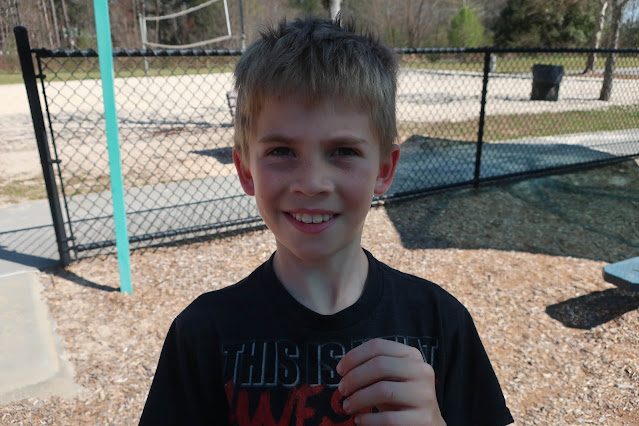 He held Phoebe for a minute and showed her all the fun things to do on the playground: 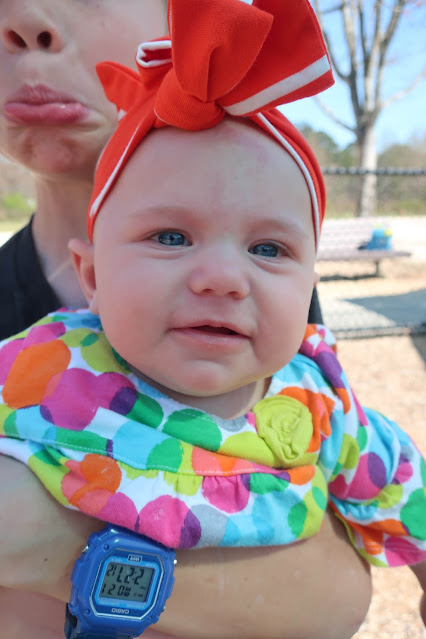 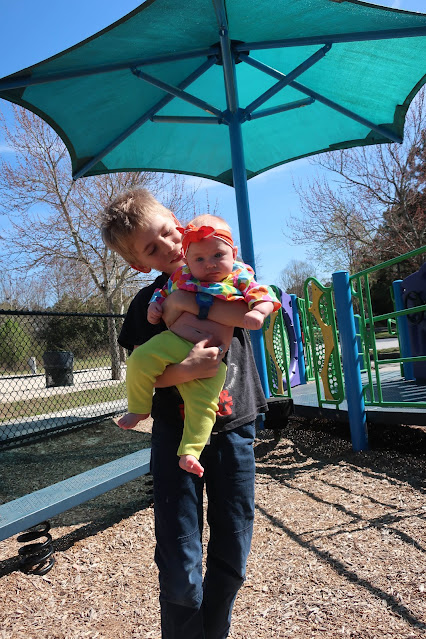 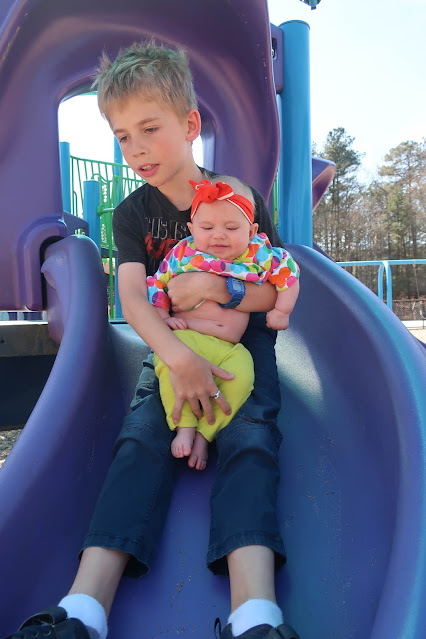 We took her over to try the swing. I forgot to bring any sort of blanket to wrap around her in the swing to help keep her upright (it's too warm to be carting blankets around anymore) but she managed to keep her balance alright and seemed to have quite a fun time in the swing. Excuse me as I share way too many pictures of her in what I thought was a very springy outfit (better than the Christmas outfit Alexander picked out for her this morning, and which she wore until she was due for an outfit change (she still needs those several times a day, it seems)), but which Benjamin described as "very hippy" and which Rachel said was "very 1970s": 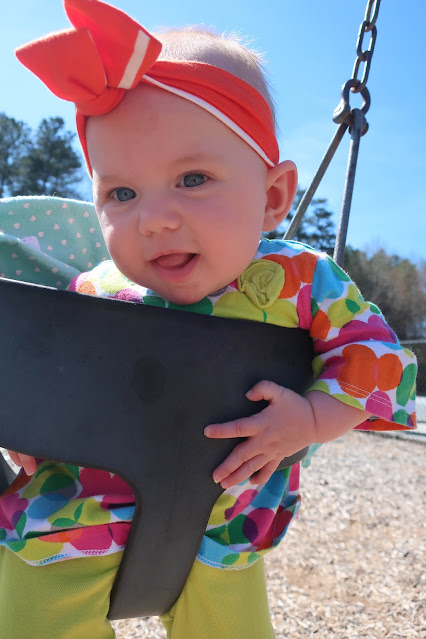 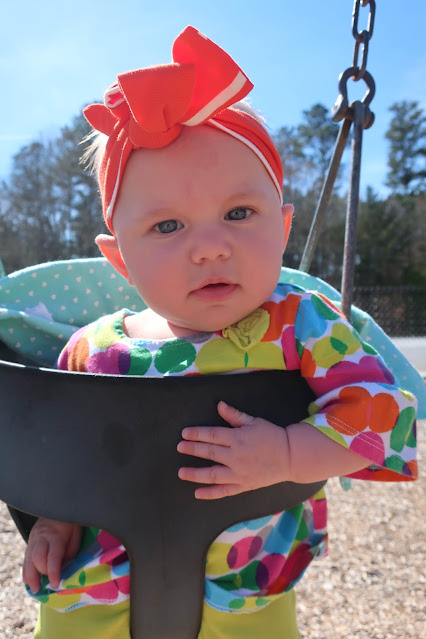 I put the burp cloth behind her in the hopes that if she fell backwards it would...cushion her fall? Or slow her fall down? Or something. I really doubt it would have done much of anything, so I guess it's a good thing she managed to keep her balance! 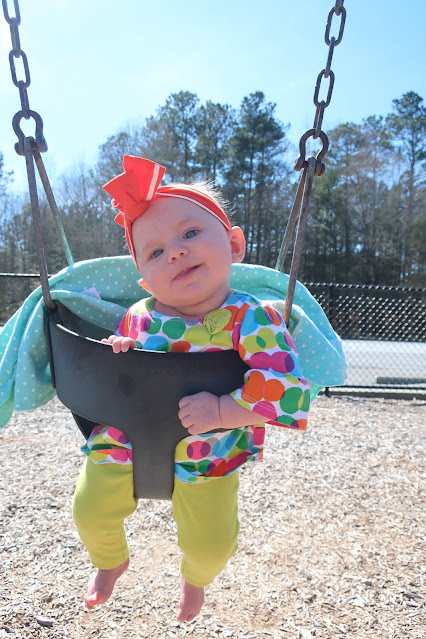 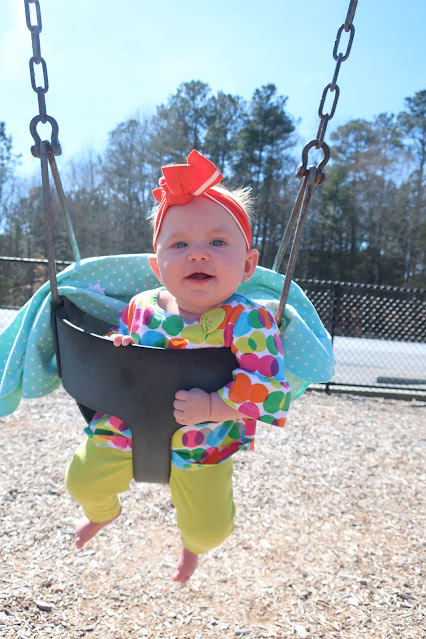 She was having a grand ol' time gently swinging back and forth. 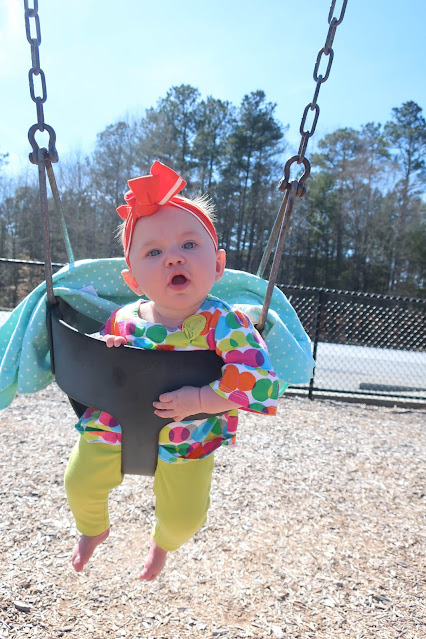 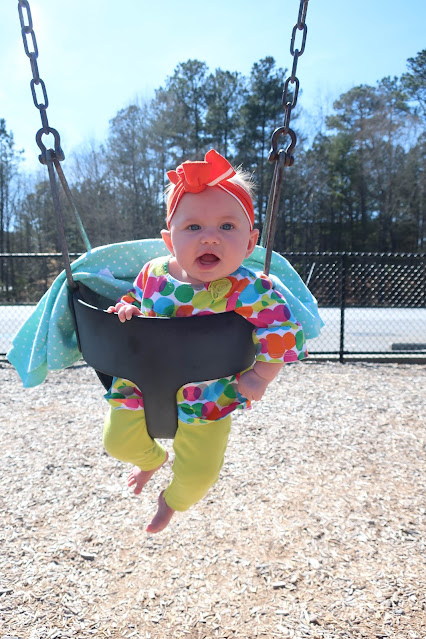 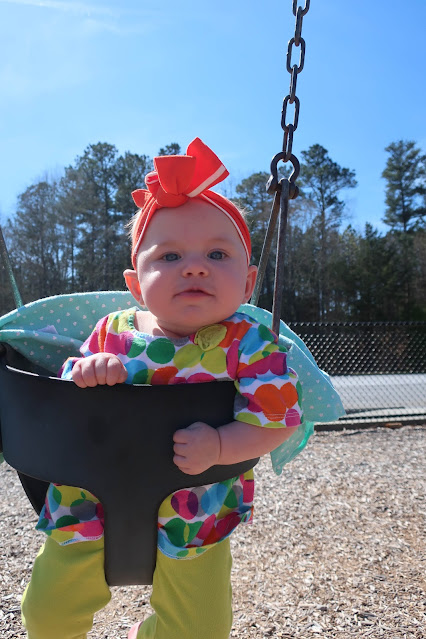 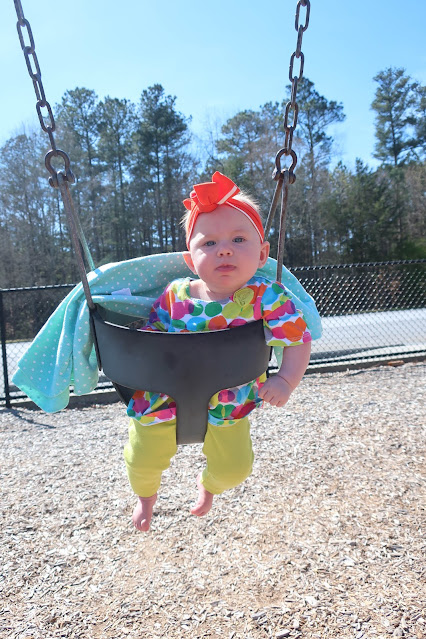 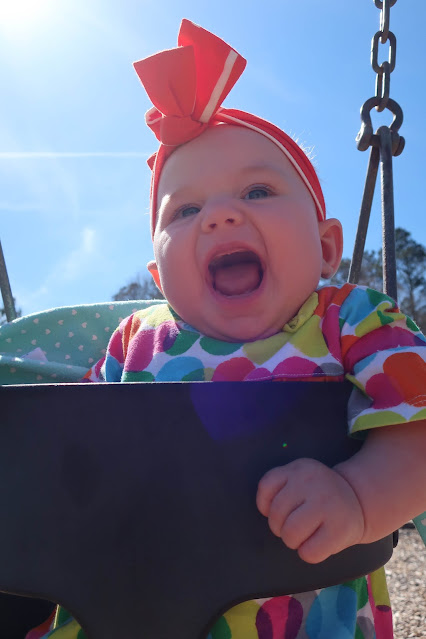 This picture reminds me of what she did last night. In this picture she's laughing so I don't know why it reminded me of last night, but...
We were in the middle of our scripture study and things were pretty quiet (surprisingly), when suddenly Phoebe screamed, "AHHHHHHH!"
Then she paused for a few seconds and everyone looked at her.
And then she let out the daintiest little sneeze: "-choo."
It was so funny! It reminded me a bit of Uncle Patrick, who we used to call Onomatopoeia Baby because he would say words like "achoo" while sneezing. Her little yell, though, was hilarious. It was as if she was warning us, "I'm going to sneeze!" And then...never mind. But then, "-choo."
Oh, look, here's Benjamin joining us at the swings: 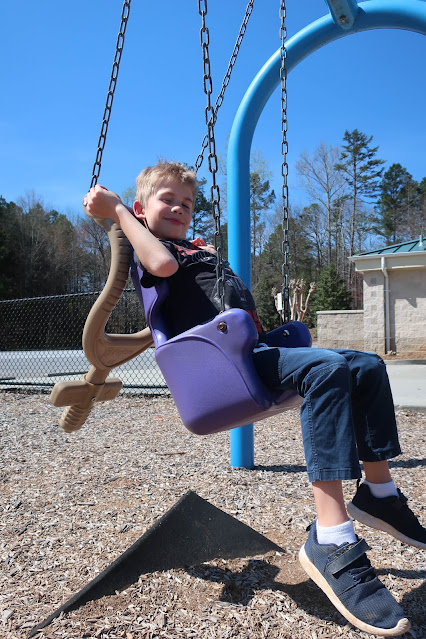 And a loving glance in his direction from an admiring little sister (with the chubbiest of chins and neck folds): 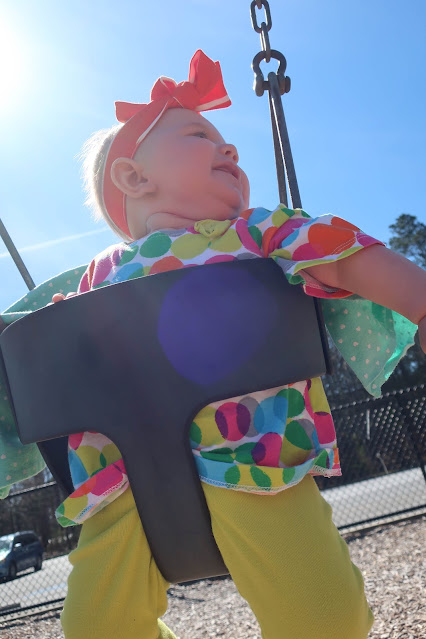 And a last couple of pictures for good measure because I'm too in love with this baby to share only a few shots of her: 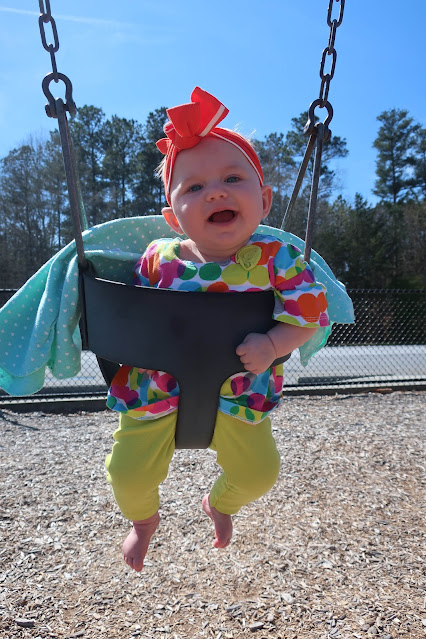 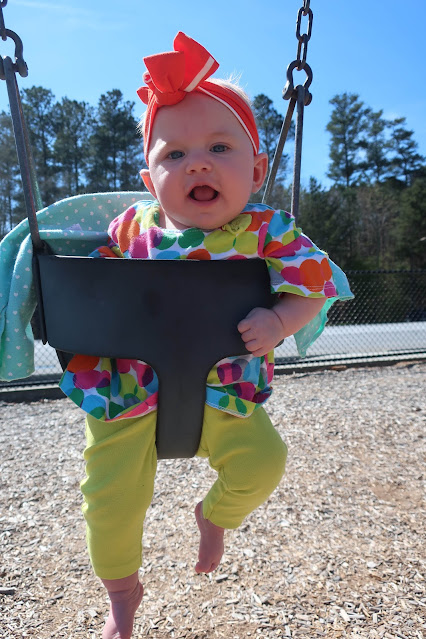