This first picture is not from St. Patrick's Day. It's just Phoebe taking a little rest during a surprisingly happy tummy time. She flips onto her stomach all the time now, and while she can flip onto her back from there, she often gets so frustrated with life on her tummy that instead of flipping over she just screams into the carpet. Because that makes sense.

But here you can see she's just being pleasant. 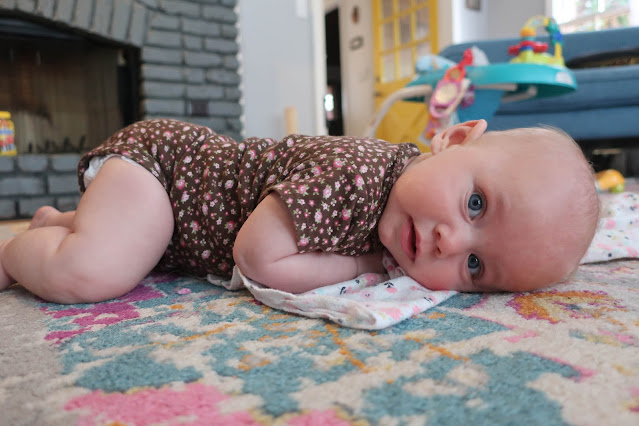 These pictures aren't from St. Patrick's Day, either. I think they are from the day before when the kids were playing a wild version of leprechaun bean-bag toss. It involved a lot of running and sliding and crashing and drove Daddy up the wall. 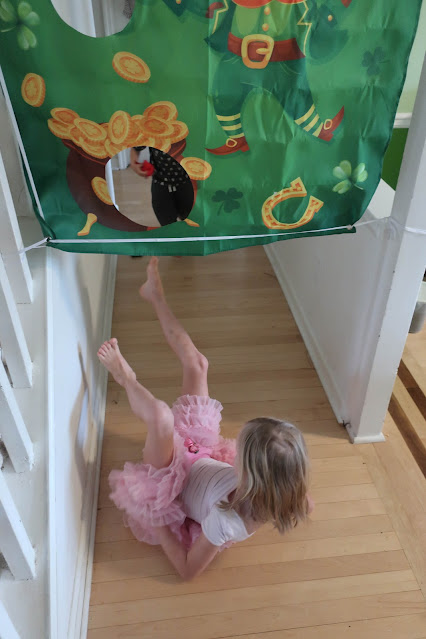 Zoë and Benjamin have been looking forward to what they were referring to as "Leprechaun's Day," so when I put up the "Leprechaun's Day" banner (bean bag toss game my mom sent to us...last year?), Alexander was very excited about it...except that he's learning to read.
"Saint Patrick's Day?! What?!" he wanted to know. 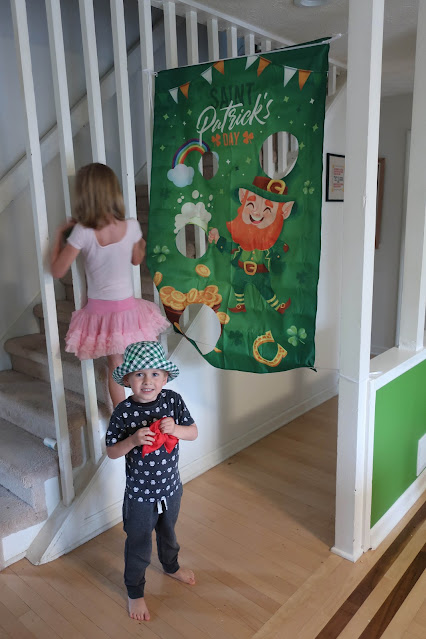 The kids were sure that they could build a leprechaun trap to catch a leprechaun and become fast millionaires (and if not that, then surely they would get a bunch of chocolate coins). I'm...not entirely sure where they come up with this stuff. But they (1) cleaned their bedroom and then (2) collected everything green they could think of to build an elaborate leprechaun trap (and creating a ginormous mess in their bedroom once again). 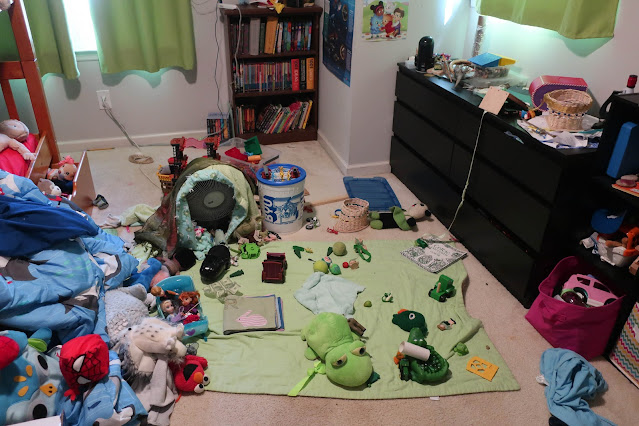 Here are some close-ups of a few details...
Luring the leprechaun with some fake money (printed on tissue): 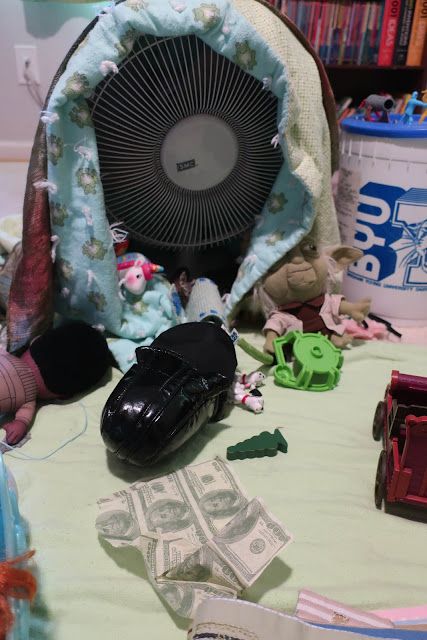 And a bunch of Baby Yodas to...fend off the leprechaun? 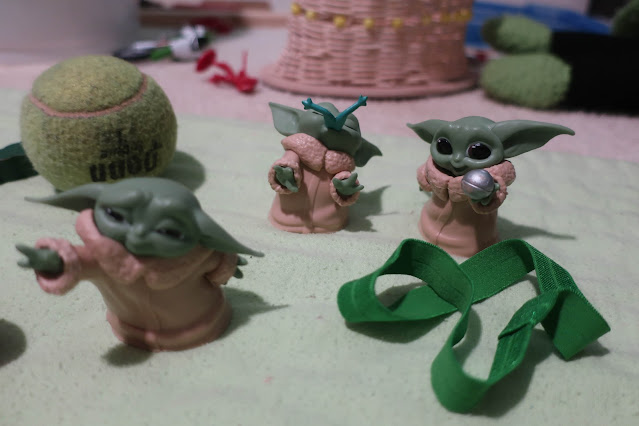 They had some idea with the fan, and Alexander even rigged his camera so that he could snap a picture of the leprechaun before he got away.
In the end, though, they didn't manage to catch the leprechaun. Benjamin got up to shut the door in the night because "Mom was working with her light on" and it was annoying him, so he took the blame for why the leprechaun had not been caught in their trap—because the door had been closed. Because obviously if the door had been left open they would have 100% caught that tricky imp!
I didn't have any gold coins (chocolate or otherwise) hanging around because I am usually pretty unprepared for holidays and was especially unprepared for this holiday. However, because they worked so long and hard on their trap (and perhaps because I knew I'd be abandoning them leaving for my conference later that day), I went ahead and dyed the milk green.
Here's Phoebe on St. Patrick's Day morning...before I put her in a pinch-proof outfit: 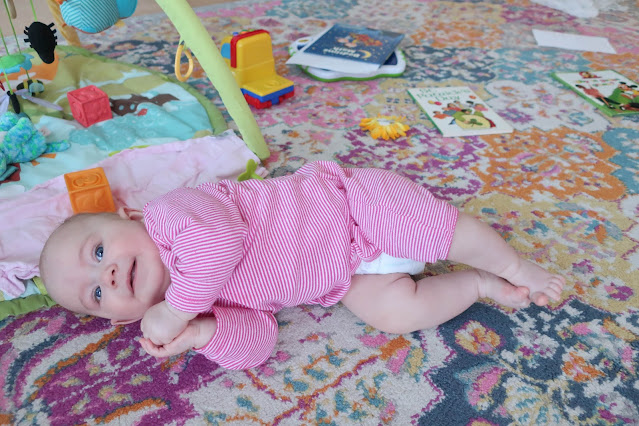 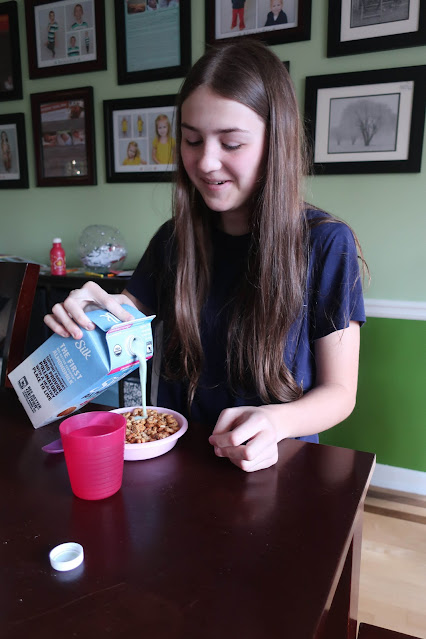 And realizing that it's green: 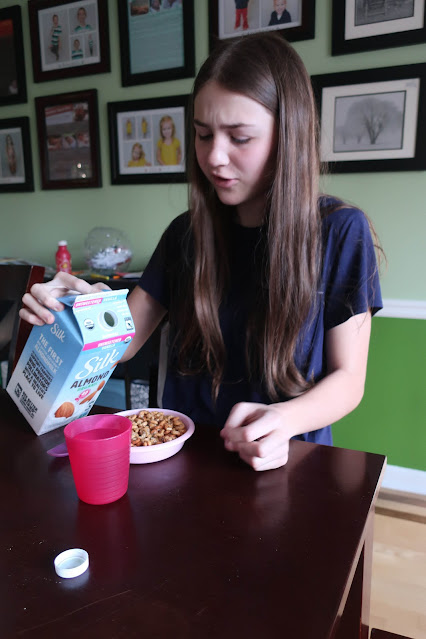 Here's Alexander's face when he realized the milk had turned green: 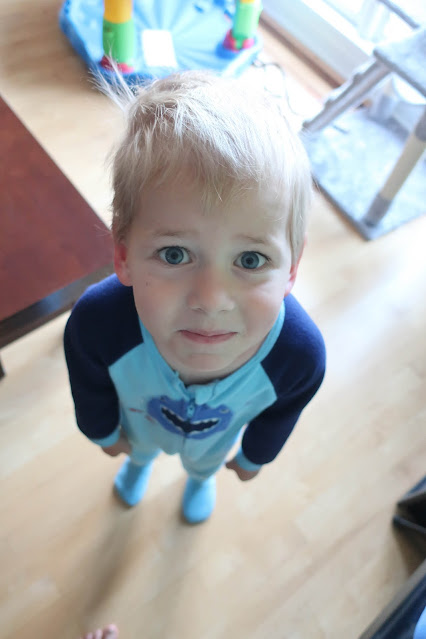 And here's how Zoë emerged from her bedroom: 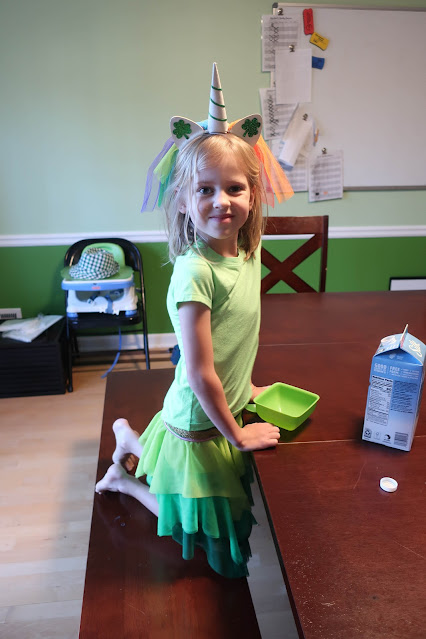 She wasn't taking any chances with getting pinched! So even though she normally stays in her pyjamas until I basically force her to change into clothes, she was dressed head-to-toe in green (and had on the fun St. Patrick's Day headband Auntie K brought for her).
Here's Phoebe in her sweet St. Patrick's Day outfit from Auntie K: 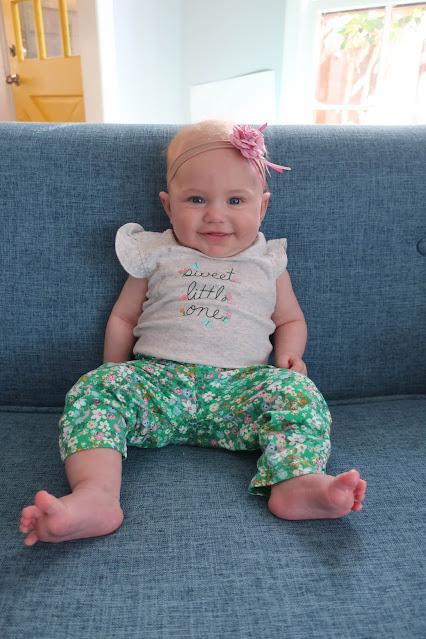 And here she is going timberrrrr... 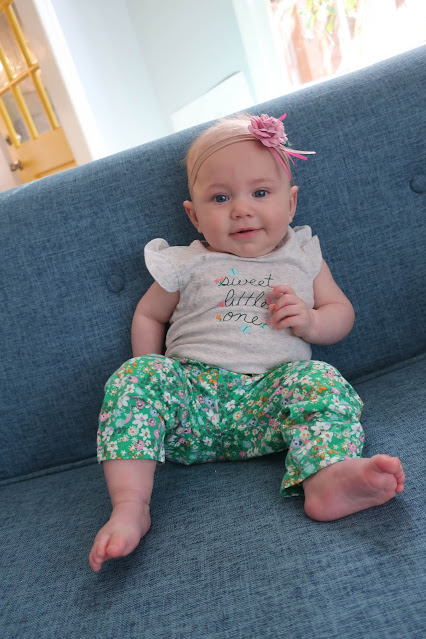 She's not very good at keeping her balance yet.
But she's started this sweet new thing where she reaches out to touch people when they're close by. Here she is tapping Alexander's knee: 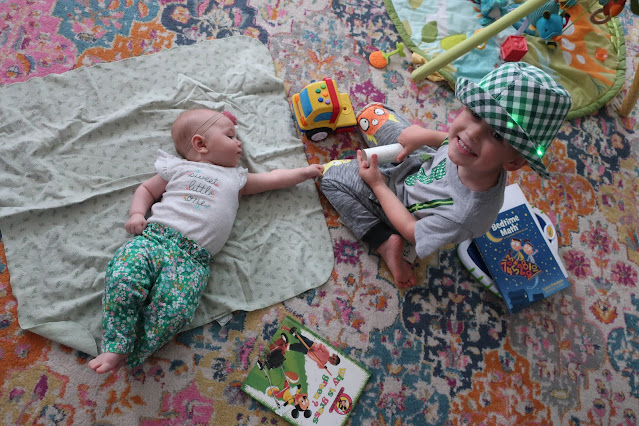 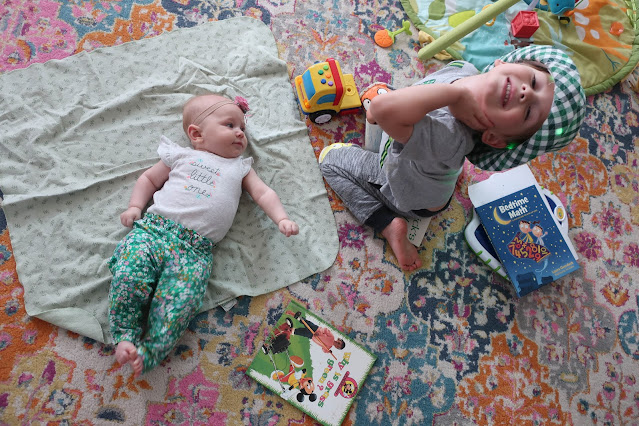 My plan was for Phoebe to wear that cute little outfit all day. Unfortunately, she had other plans for that outfit. Plans that involved pooping straight up her back. I had been trying to take a picture of the kids in their St. Patrick's Day clothes the whole day, however, and I wasn't about to let a little (big) blow out and a passel of uncooperative children stop me!
So finally just before I was ready to walk out the door (because naturally Phoebe would choose that moment to have a blow out) I managed to gather all the kids together in their St. Patrick's Day finery. 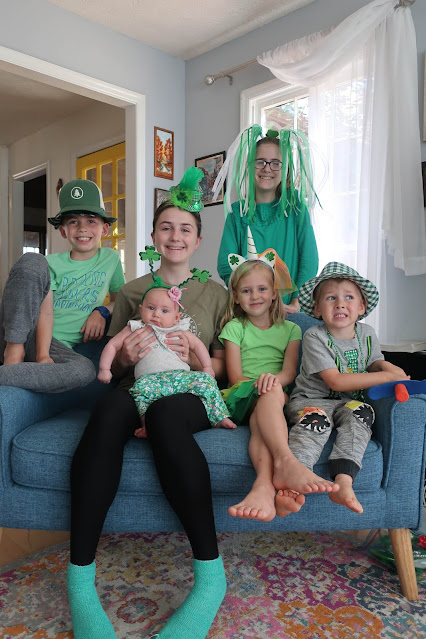 What you can't see in this picture is the poop stain all up Phoebe's back (poor Rachel wasn't terribly excited about holding her, but...if they had all just cooperated ten minutes prior to this moment it would have been pre-poop pictures rather than post-poop pictures). 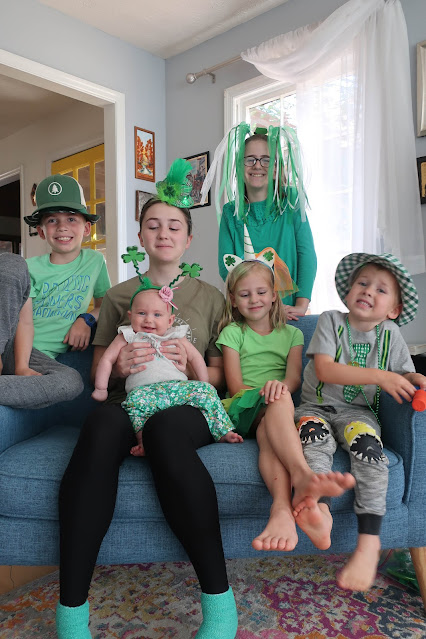 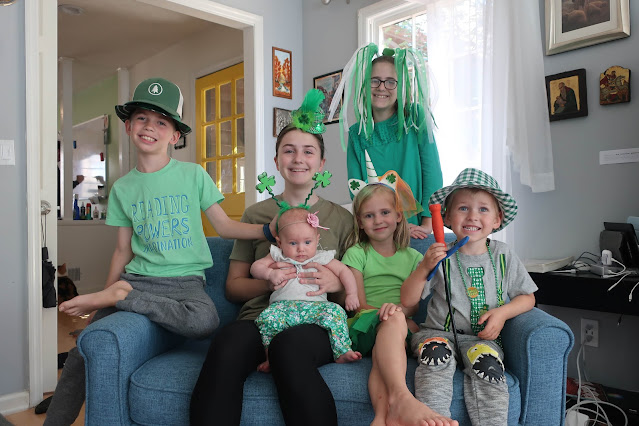 They're a good group of kids.
Here's Phoebe in a fresh green outfit, getting some last-minute snuggles from Zoë before I loaded her up in the car: 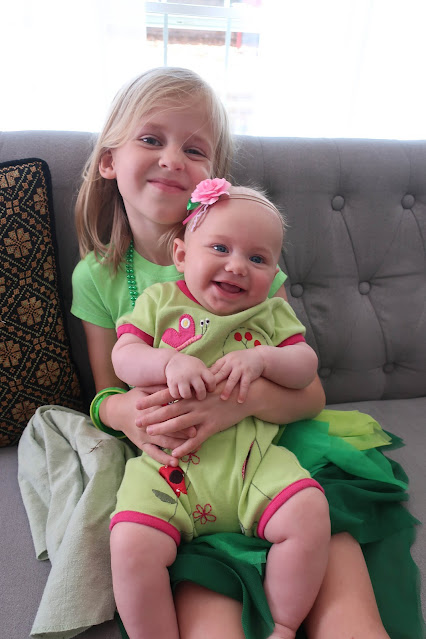 We had to stop to fill up Andrew's car before we could truly leave town (which was a little painful to do since gas is so expensive right now), and Phoebe took that time to have another ginormous poopy diaper.
Like, I just don't even know how she was able to poop that much after, you know, having such a massive blow out at home! It was just a really poopy day!
Anyway, we made it to campus just a little bit later than I was expecting, but I managed to do the things I needed to do before the conference so everything worked out just fine.
(It was the Georgia Conference on Children's Literature, to answer your question, Susanne.)
I don't really know what else the kids did for St. Patrick's Day, though I hear the girls (Rachel and Miriam) made a wonderfully fun dinner of macaroni and cheese, green beans, cucumbers, and tomatoes. Miriam plated the kids' meals as leprechaun faces, with macaroni and cheese for the beard, green beans forming a hat, cucumbers for the eyes, and a cherry tomato for the nose.
Posted by Nancy at 1:19 AM