One thing led to another, which turned into a snowball effect of sorts, and...suddenly...Grandpa lives around the corner from us! It's a little surreal to have family nearby all of a sudden, but it's been fun so far.
At least for us.
Andrew went to close on the house on February 28th and for FHE that week we took the kids over to tour the house. They were very excited to explore! 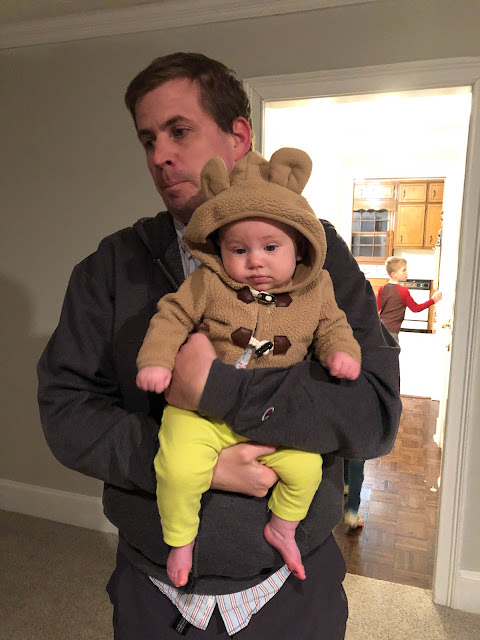 Look at that cute little bear... 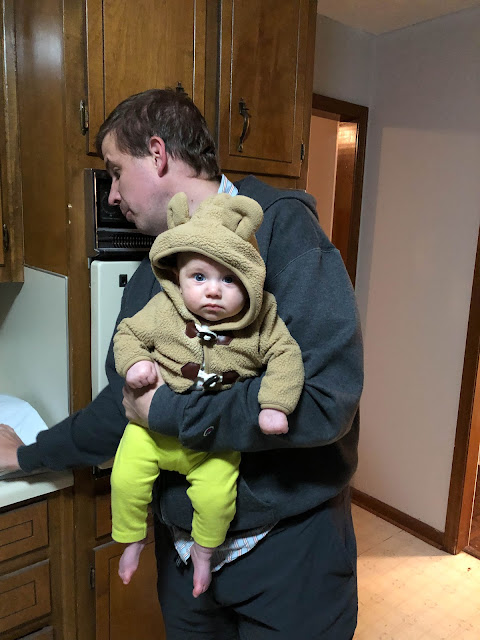 ...she was very tired.
Here's Zoë posing by the window: 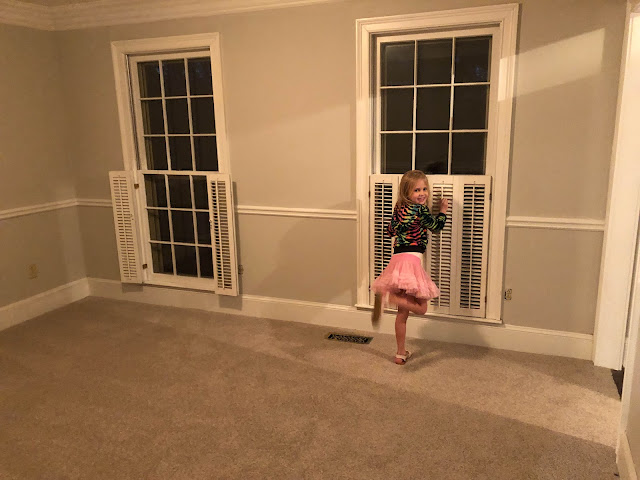 And here are Zoë and Alexander hiding in a closet: 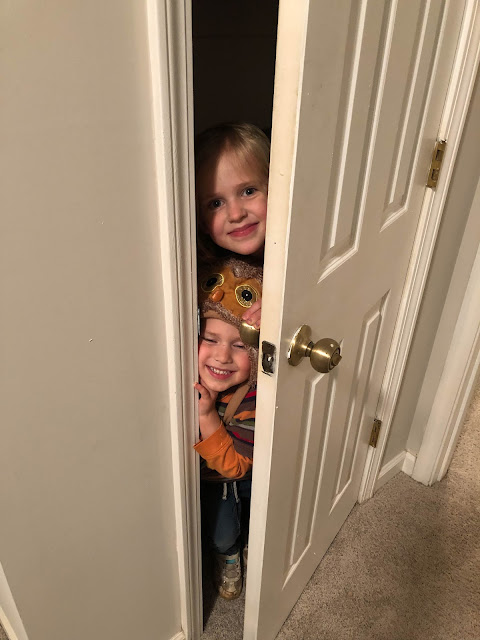 The kids wholesomely nicknamed the basement the Serial Killer Basement. It's a little creepy: 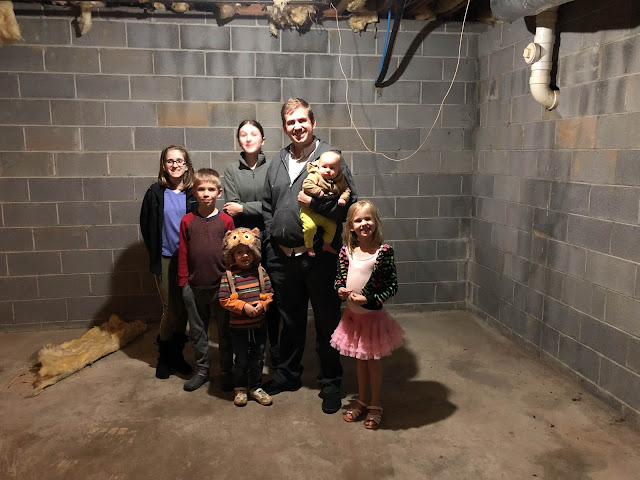 Because the basement attaches to the garage, it's easy to air out and bring a lot of light in. So it isn't too scary, but this picture startled me when I was looking through the pictures I took of Grandpa's house on our tour (to show to my mom because she likes looking at houses). If you zoom in and look at the third window from the right... 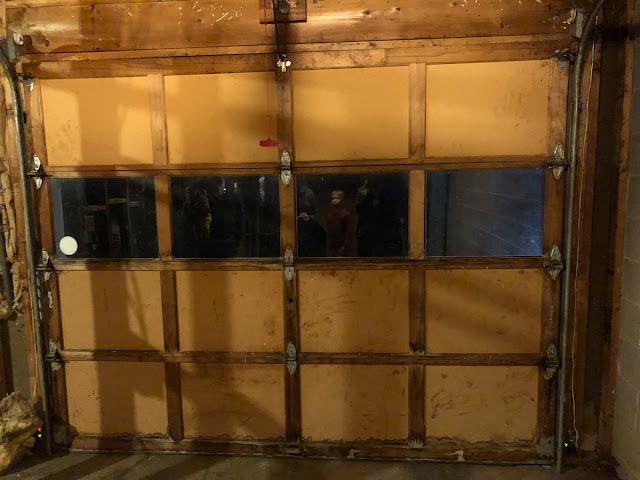 ...it's just Benjamin's face reflecting back at me, but his is the only face positioned just so it's showing in the window, and the hand that is there is not his hand and...I dunno. It just spooked me for a minute when it popped onto my screen, so I sent it to Andrew's computer and when he pulled it up, it spooked him, too.
Anyway, the next day I took the little kids back over to Grandpa's house so we could be there while the internet was installed. The kids brought their school books and we just worked the morning away. 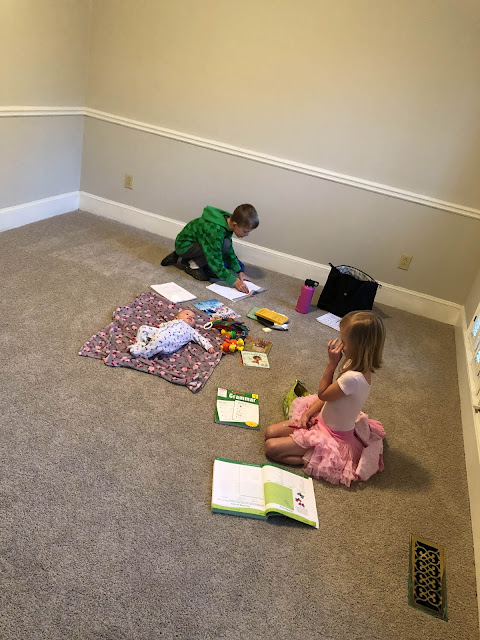 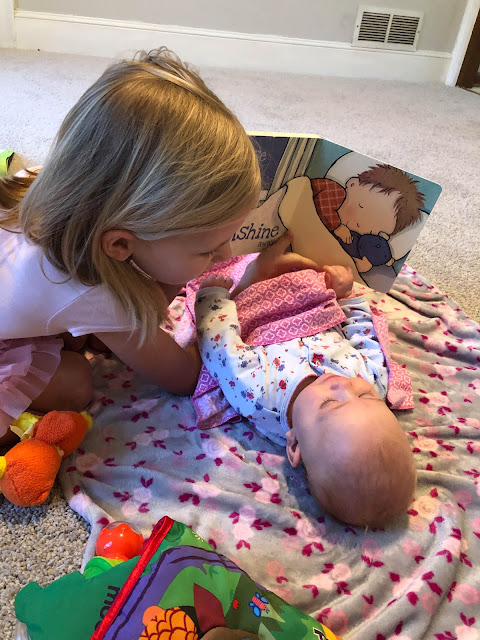 And here she is sitting on the heater vent, once I'd figured out how to turn it on. We were all just freezing! Now that I'm thinking about that morning, I had only been planning on taking Benjamin and Phoebe with me—we dressed in sweaters and I brought blankets for the baby, knowing it was a chilly morning. But then Zoë woke up just as we were leaving and started pitching a fit, so she got to come, too. She neglected to grab a sweater or anything, so was suffering through the chilly morning in her ballet clothes.
Not that she's taking ballet lessons. She just wishes she were.
She wrapped up in the towel we'd brought with us to put in Grandpa's bathroom (the one he left here when he came out for Phoebe's birth), but was still quite miserable. Anyway, I figured out how to turn the heater on and she was much happier! 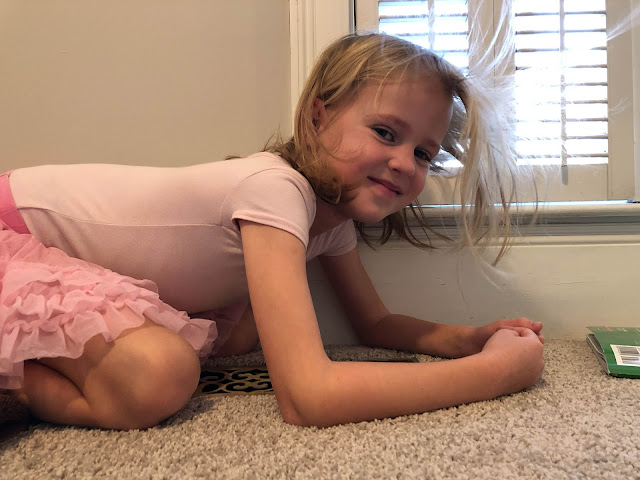 Grandpa left his house last Thursday and was planning on getting here by Sunday (and if not by Sunday, then by Monday), but we figured he'd drive a little faster than he expected because it's easier to travel faster when you're traveling alone than when you're traveling with a bunch of little kids. And he did drive faster—fast enough that he arrived Saturday evening.
We spent Saturday preparing for his arrival. Andrew went to pick up some groceries and other household necessitates since (a) he'd be arriving on Sunday and we try not to shop on Sundays and (b) nobody likes to run to the store right after they finish a big long drive. I'd had the kids work on some poems for Grandpa on Thursday for our English lesson and they spent Friday and Saturday turning those poems into a welcome card.
This is just a happy baby: 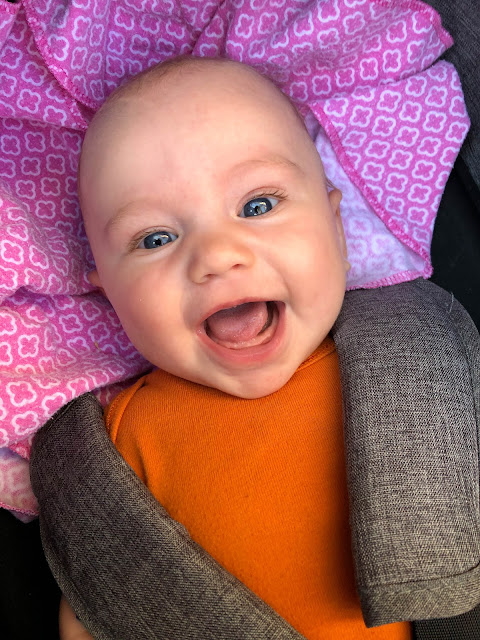 Here are their cards: 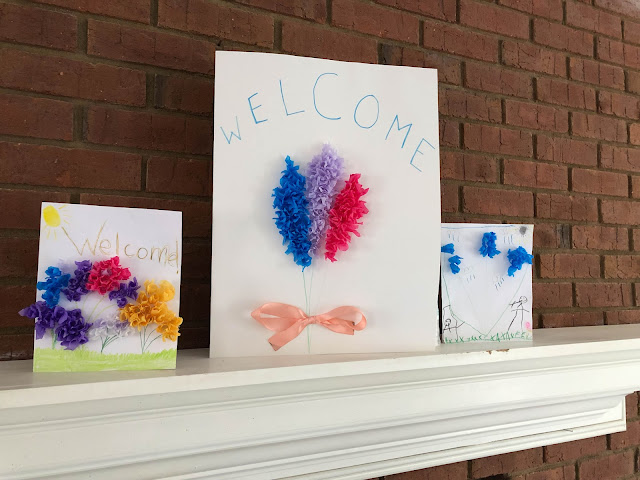 And here is, first of all, the sonnet that we wrote together after brainstorming about memories of Grandpa and our hopes for things we'll do now that he lives close by:
Our grandpa drove 2000 miles east
With nothing but a single change of clothes.
We'll make him yummy bread—but hold the yeast—
(And wonder who will clip nails from his toes).
With helmets on we'll take off on our bikes
To Dunkin' where we'll pick out one treat each.
We'll lace up shoes to take a weekend hike,
Or head down to Savannah and the beach.
We'll settle in to watch 'Lord of the Rings,'
Play 'Hand and Foot' and 'Cutthroat UNO,' too.
We'll ask for help with history and things.
He'll never have to wonder what to do.
Our grandpa makes the milk feel not alone;
We'll do the same for him in his new home.
The kids each also wrote a limerick for Grandpa. Here's Zoë's:
My grandpa's unusually funny
His smile's contagious and sunny.
Have a grandpa like mine?
He's just so sublime.
He's like a pot full of honey.
Benjamin's:
My grandpa likes Thai sauce and noods
And plenty of other "gross" foods,
Like licorice drops
That he eats nonstop.
These foods fit my overall mood.
Miriam's:
I know a guy from California
Who wore wooden shoes and would bore ya
His name is Reid Heiss
He is pretty nice
And he will be moving to Georgia
Rachel's:
There once was a grandpa named Reid
Who jumped on his wheeled metal steed.
From Win- to Westchester
He drove like a jester.
And arrived in the south with great speed!
And one from Alexander and Phoebe (which I helped them write because they're babies):
I'm so glad my grandpa is here!
We'll get out our cycling gear.
We'll ride uphill and down
And all across town,
But look at his driveway...oh, dear!
The little cards that Zoë and Alexander made are also filled with poems. Alexander's card says: 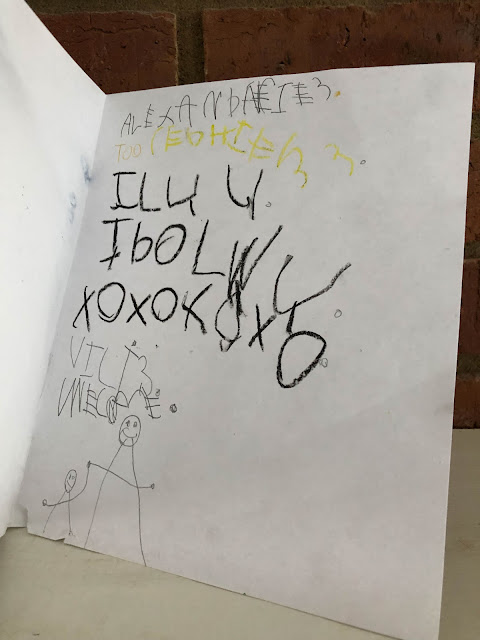 Alexander Heiss
Too Red Heiss
I love you
I do love you
XOXOXOXO
Violets.
Welcome.
Zoë's card says: 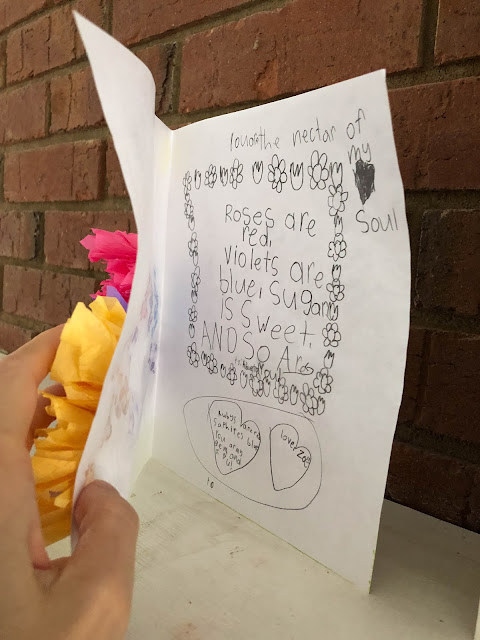 Roses are red,
Violets are blue,
Sugar is sweet
And so are you!
Rubies are red,
Sapphires blue!
You are my gem
And I love you!
She added, "You are the nectar of my soul!" as an afterthought and said to me, "Isn't that beautiful?!"
We also made a "WECOME" banner to hang on grandpa's wall. You may notice that the banner is being created on Grandpa's kitchen floor, which is completely water-free: 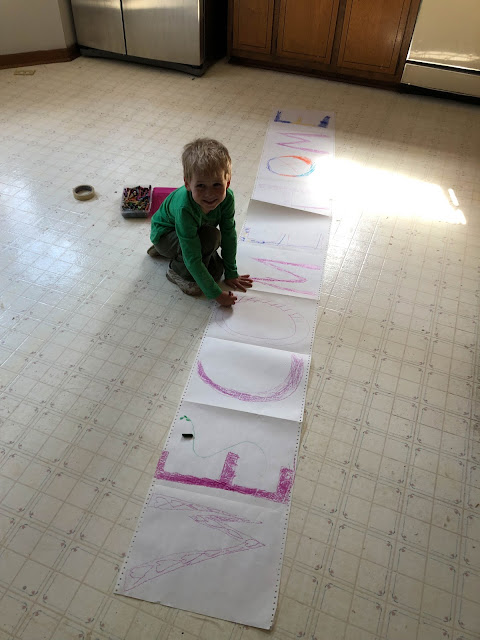 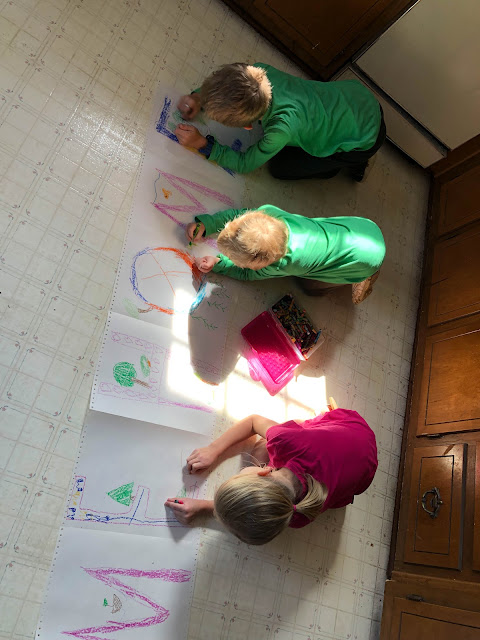 The banner had to say "WECOME HOME" rather than "welcome home" because once when Andrew was a teenager or so, he was charged with making a homecoming cake for some purpose. Someone had gone out of town for some reason. He can't remember who or why. But he baked them a cake. And then he carefully iced it and wrote on top in his most beautiful handwriting, "WECOME HOME!" 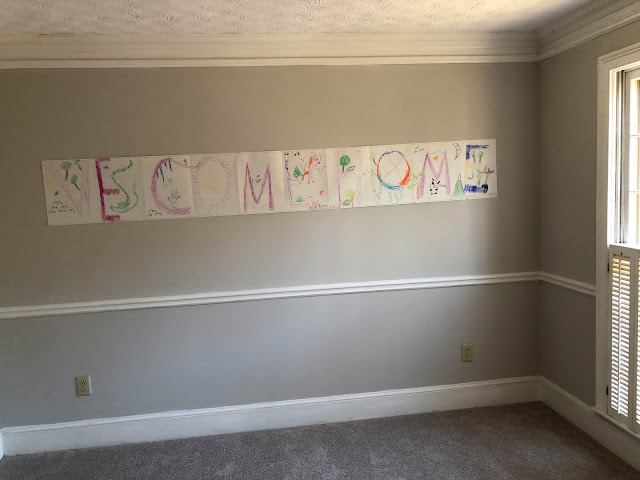 Now, when Andrew was in middle school he took a woodworking class and he used a wood burner to put his name on one of his projects. The only problem was that...he misspelled his own name! He wrote ANREW instead of ANDREW!
Whenever anyone came home from anything, there'd be a "WECOME HOME" sign. But since Andrew was the ultimate butt of the joke, when he came home from his two-year mission in Italy, you can bet there was a "WECOME HOME, ANREW!!" sign.
So naturally Grandpa needed a WECOME HOME sign as well. It just about killed Zoë to do it, but she managed to spell welcome perfectly incorrectly. She is an impeccable speller, honestly. But she's also a good sport.
And why was it important that I pointed out to you that the kitchen floor was dry as a bone? Because...when Grandpa got up on Sunday morning, his kitchen floor was covered in water!
Turns out the toilet above the kitchen was leaking and we didn't even know it!
I felt so bad! But Tom, our fix-it guy, went over there and reset the toilet on a new seal, which seems to have fixed the leak. And then he fixed the other toilets, too, because they were all leaking. At least they're fixed now but...I felt so bad about all that water.
I feel like the first couple of years we lived here something was always leaking. The sound of water leaking is enough to give me nightmares!
Speaking of nightmares, the kids left one last surprise for Grandpa (besides the cookies in his freezer)...
They went down to The Serial Killer Basement (which is much less spooky in broad daylight) and left him this: 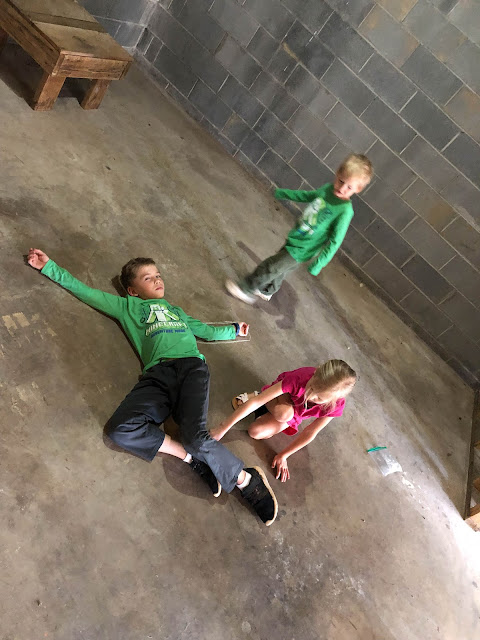 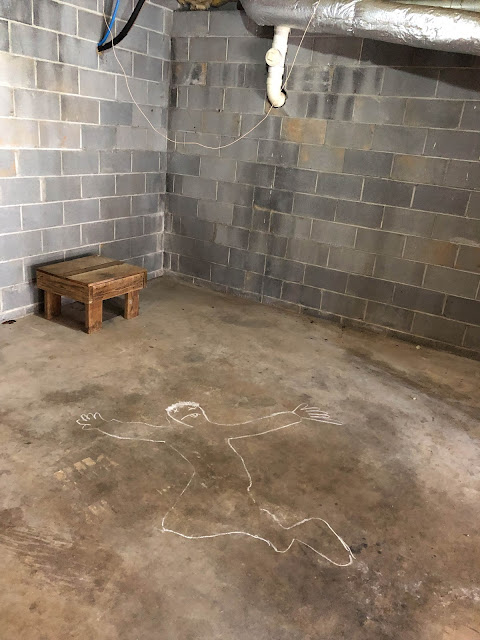 Andrew was busy rewiring a switch (that had been wired to be permanently on, so Grandpa wouldn't have been able to turn his bedroom light off (Andrew rewired that wrong, too, because now if you turn the switch off the outlets in the room stop working as well, so that's on the list for a real electrician to figure out)) and I was busy vacuuming the carpets (which are new but which hadn't been vacuumed since their installation so they were covered with stray carpet fibers).
Here's Rachel and Miriam hanging out with Phoebe (who christened Grandpa's house with a big blow out): 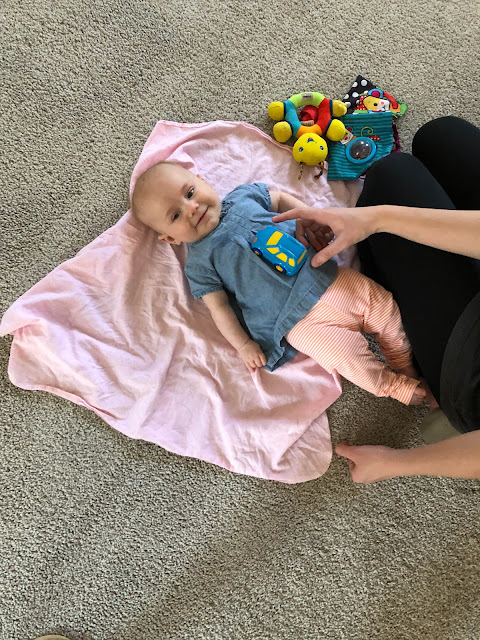 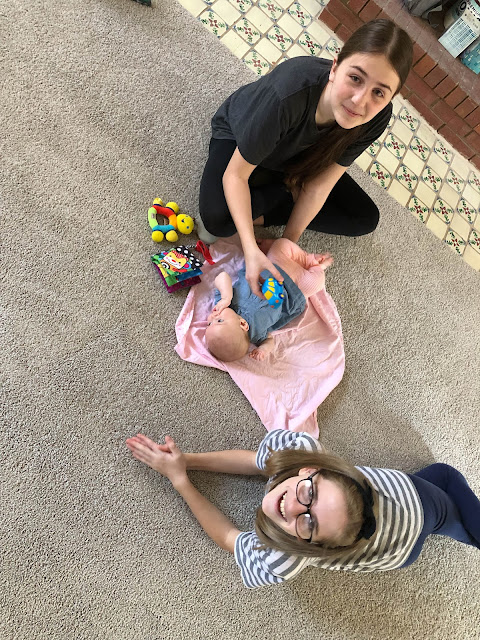 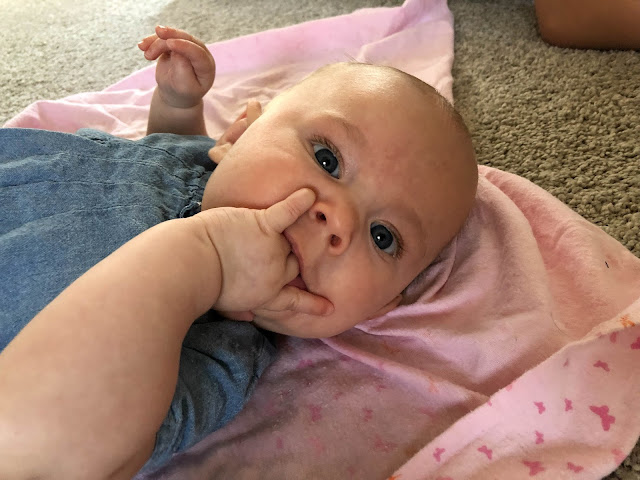 By this time, Andrew and I knew that Grandpa was going to make it in by Saturday evening, but we didn't tell the kids. We just had them take baths and tidy things up like we try to do most Saturdays. I had just finished reading the kids a story and had sent them off to go choose "one more" when our front door opened (Andrew had left it unlocked on purpose) and in waltzed...
"Grandpa!" 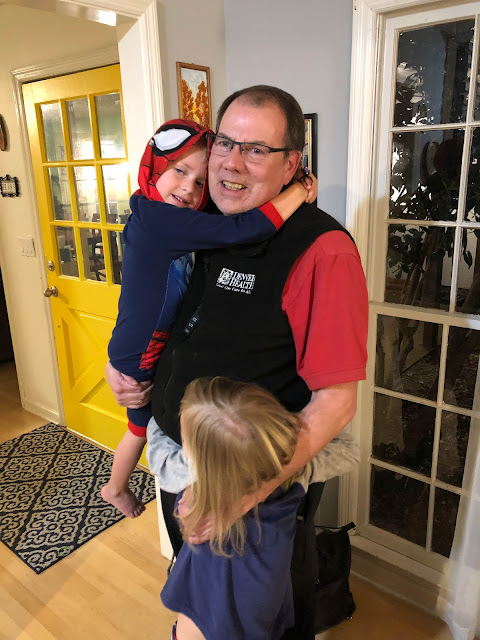 They were so excited to see him and have been overjoyed to have him over for dinner. Zoë got to go over to his house to read while it was raining the other day, which she was so proud about (she was the first one to get to hang out at Grandpa's). Grandpa took Miriam to her organ lesson today (Andrew doesn't usually go into campus on Wednesdays, but had meetings all day today so wouldn't have been able to take her). And let's just say that so far things have been pretty great!
Posted by Nancy at 10:18 PM