We did it! We made it through the conference!

I don't know how I would have been able to do it without Andrew, who was my cheerleader over the past year and helped me through more than one emotional breakdown. It's not every day you commit to working a new job and taking more than a full load of graduate-level courses in addition to homeschooling your already-handful of kids and then find out you're pregnant. But it was one day.

At least, it was for me. We're coming up on the one-year anniversary of that day.

That day wasn't pretty. Not exactly.

But we made it through it!

And now, here's Phoebe being a beautiful (tired) baby at a beautifully coordinated conference: 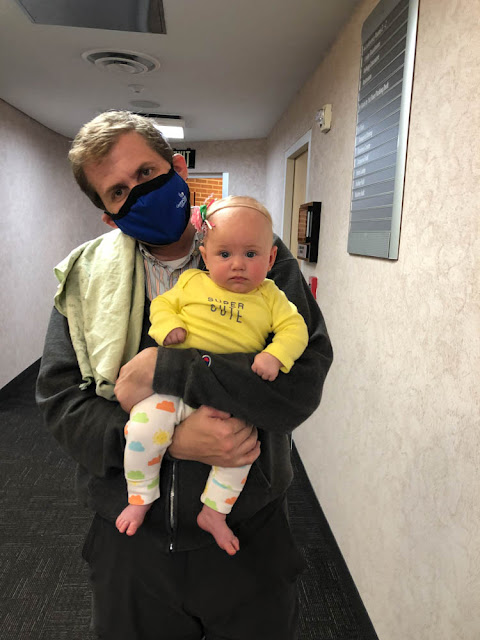 Taking a baby to a conference in the middle of a pandemic was...not on my list of Things I'd Like to Do. But Phoebe is still very much a nursling (she's shown zero interest in food so far) and so...she came to the conference. Andrew came, too, so that he could tend her between feedings. They mostly stayed out of the way of things.

I was originally going to have Rachel come to the conference with me to tend Phoebe, but then Grandpa moved out here (another support person I wouldn't have made it through this conference without), so we had him stay with the older five and Andrew came with me (see?!—Grandpa was a lifesaver). And it's probably a good thing it worked out that way because the first day of the conference was long and Phoebe was not confident about her survival skills without Mommy.

Andrew clocked fourteen miles of walking with Phoebe. They walked all over campus in the morning and then—when a ginormous window-rattling, make-sure-you-know-where-the-tornado-shelter-is storm rolled through—all over the conference center in the afternoon.

Luckily, it's a fairly small conference so they were able to avoid people (though many people did ooh and ahh at her from a distance).

My advisor and I had a meeting just a few days before the conference and she asked me about my plans for Phoebe, so I explained that Andrew was fortuitously on spring break and would be coming along and she mused that that would probably be a fun little getaway.

Now, I admit that we did have a relaxing evening on Thursday when we arrived. I had a few things to do to get ready to go. We stopped by my building—Aderhold Hall, which is funny because Aderhold is also the name of Andrew's building, only his building is in downtown Atlanta at GSU and my building is on UGA campus in Athens—so that I could grab some supplies and things. These cute masked bulldogs are all over campus. 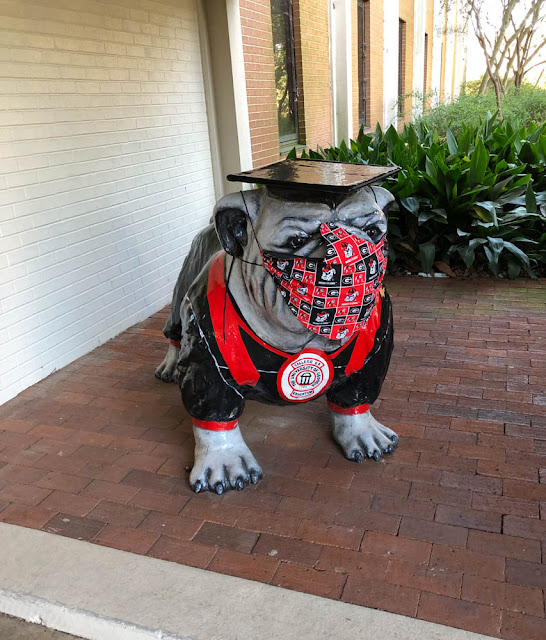 Then we went over to the conference center and got checked into our hotel room. Here's Phoebe chilling on the bed: 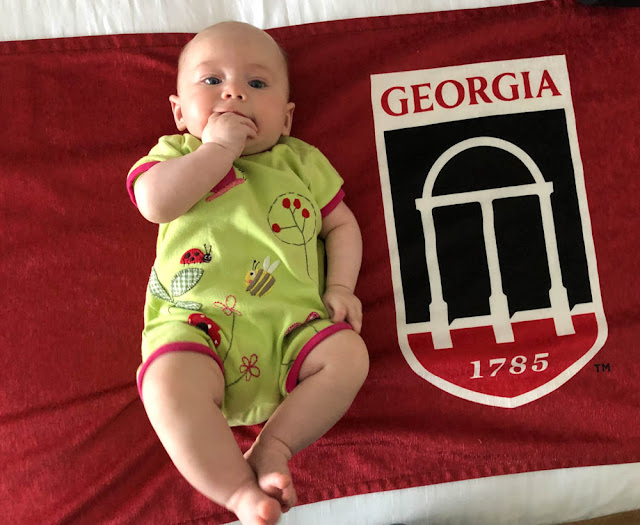 Then we walked downtown to find some dinner. We found a cute little burger place without outdoor seating and enjoyed that bit of our evening.
But the hotel room was very small and aside from the room light, the only other light source was the bathroom light. Phoebe had a tough time going down. And then I was stuck lying with her while Andrew read by the light of the bathroom door. And the bed linens were so loud I was afraid to move for fear of waking up Phoebe.
So it was nice to get home where we can talk and move and put the baby down to nap in another room or...let her snooze on her favourite napping spot... 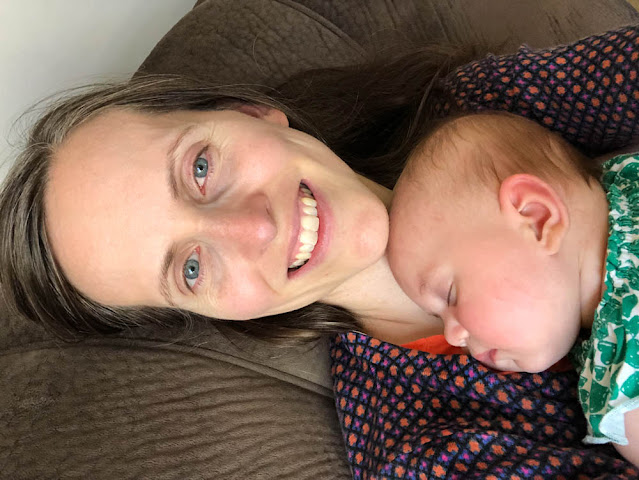 Ignore (or don't ignore; your choice, I guess) how deeply tired I look in this picture. I'm my-baby-is-four-months-old tired. I'm I've-been-mothering-for-fourteen-years tired. I'm wow-that-conference-was-a-lot tired.
Phoebe didn't really get a good nap in the whole conference, so she was also bone-weary.
After we got home we spent some time reconnecting with the kids, which included playing badminton with Benjamin (no pictures because I was...playing badminton) and watching how well Zoë can (sorta) rollerblade now (Grandpa taught her "it's all about balance"). 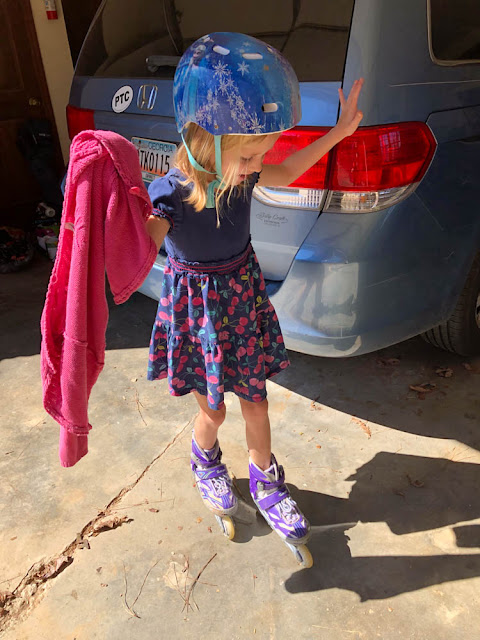 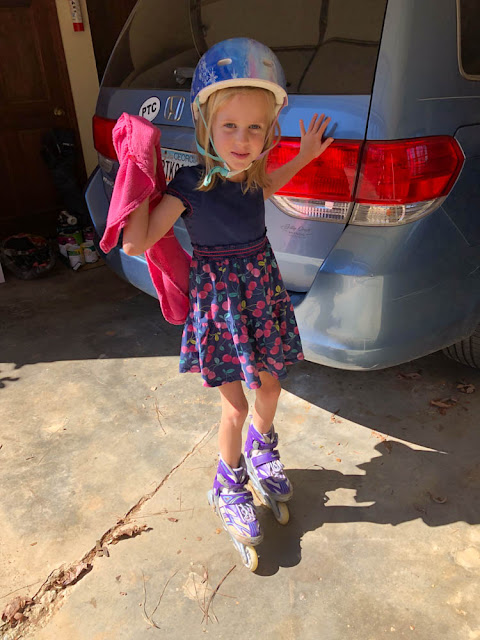 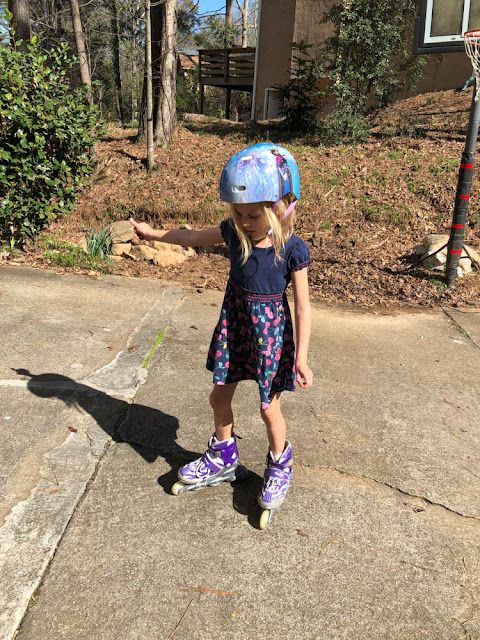 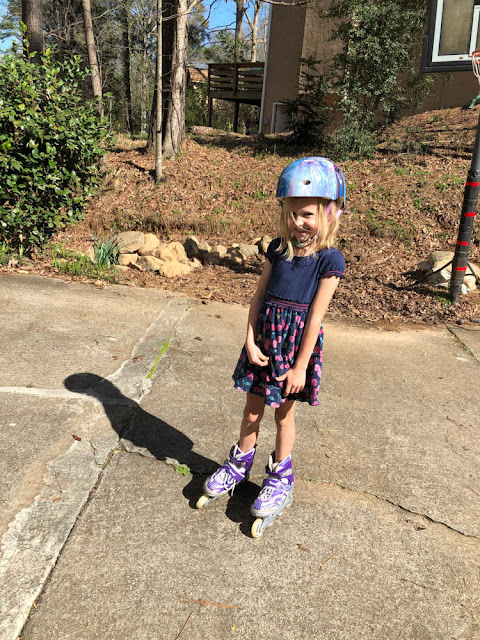 When Phoebe was over sitting in her chair watching her family play, I took her inside to nurse. She fell asleep, I snapped this picture and then also fell asleep and we slept for hours. 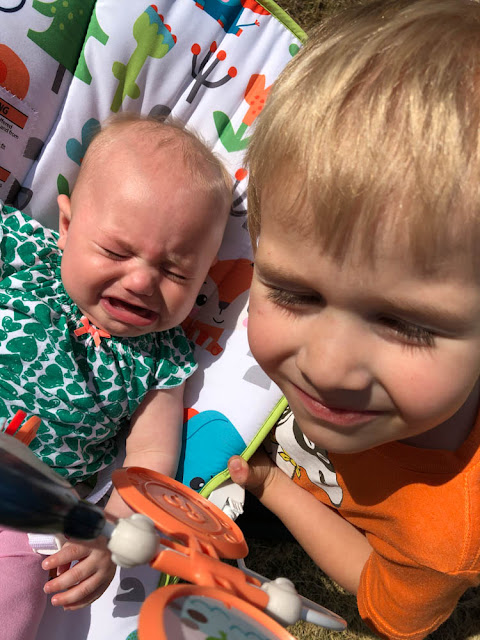 Anyway, all that is to say that Andrew and I felt more like we were giving the silent treatment to each other this weekend, rather than like we were away on a romantic getaway. We hardly spoke!
It was hard for the kids to understand that even though Phoebe (and Daddy) had been with me all weekend, they had not, in fact, been with me. Alexander, in particular, wanted some Mommy time. And he got some! But he couldn't understand why Phoebe also needed Mommy time. She has been quite clingy since getting home. We went on a walk after dinner and for the first time ever I had to take her out of her stroller and carry her while Andrew pushed it because she simply couldn't look at me and not have me be holding her.
Here's Benjamin getting some goodnight snuggles with Phoebe (who also wasn't so sure about letting any of the kids hold her because she was too thrilled to have an unlimited milk supply at the ready to want anyone else). 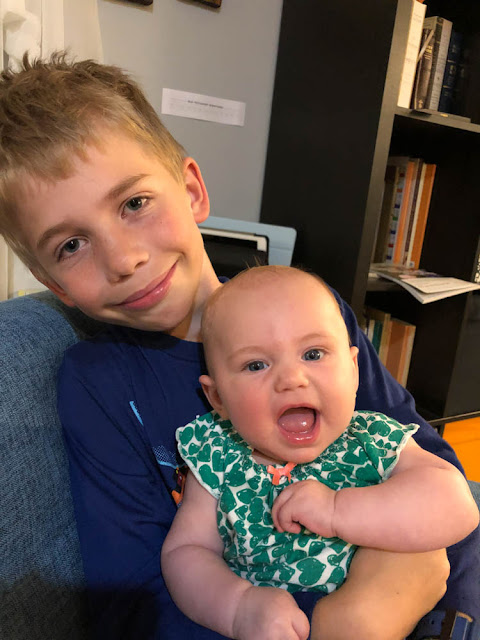 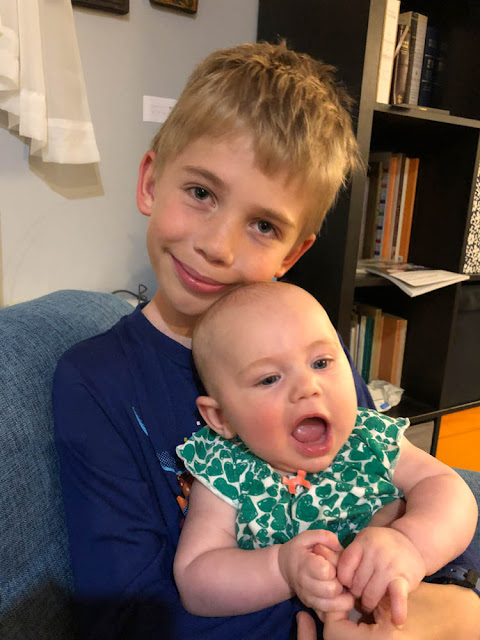 Anyway, I'm sure I'll write more later.
I'm hoping I'll feel a little less frazzled when I wake up in the morning. In the meantime, "Go Dawgs!" 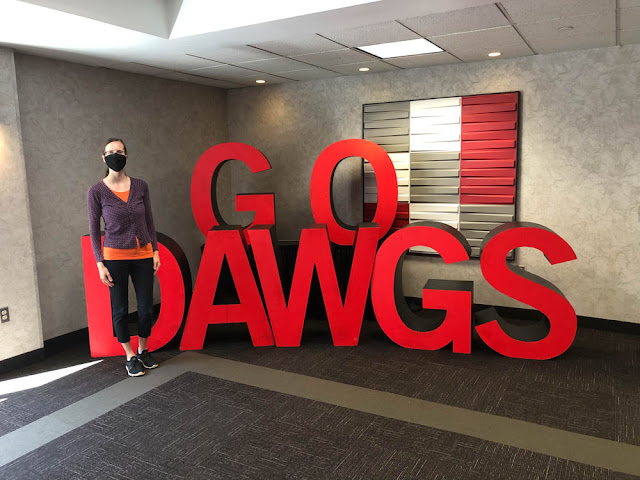 I guess that's a thing I'm supposed to say now, but I think in this picture I'm probably thinking about how my dogs were barking. I don't know how far I walked over the course of the conference (I can't stand wearing fitbits, unlike Andrew, who doesn't mind having things on his wrist) but I know it was a lot!!
And, randomly, here's a picture I was surprised to get from my mom of a little visit Auntie Emily paid her at BYU: 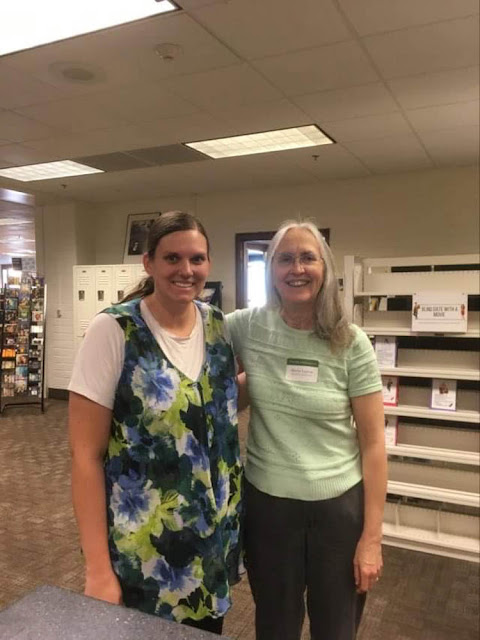 With Andrew's dad still so freshly arrived here, it feels a little bit like the time Andrew went to England for research and my mom ended up being there the same time so I got pictures of my mom and Andrew (and David, because they were crashing at his place) in England...but Andrew's mom had come out to stay with us while Andrew was gone, so I was sending them pictures of me and Karen.
But this time, it was seeing a picture of Emily in Utah with my mom...and then having her call me in Georgia to ask where her dad might be because he wasn't picking up his phone and she needed to get ahold of him (I didn't know where he was, though, because we were still driving back home).
Anyway, just a weird timing of events.
Posted by Nancy at 12:35 AM