March Madness is going on right now. Andrew and I procrastinated filling out a bracket so long that we didn't end up filling one out at all. I am not very into the sports thing so this incident didn't really bother me. Andrew was a little upset by it though.

Then I read Natalie's blog and I knew it was fate.

We've started a new Easter tradition--The Annual Heiss Family Easter Egg Smackdown--thanks to Natalie. Andrew got in his need for a bracket and we both had a lot of fun.

I tend to get attached to things a lot easier than Andrew does. My eggs, if I dare say so myself, are a lot more detailed and have much more creative names than Andrew's. It was hard to convince myself that I should let my eggs suffer such a fate. When I was little I always wanted my eggs to be the last to be peeled and eaten--I remember crying over an egg or two over the years.

This year my favorite was Stumpy. He's the little mouse in the top left-hand corner and I think he's rather cute. He has paws and a tail, too, but you can't really see them in this picture. I hated to choose him because I wanted him to be the last one to turn into egg salad, but I just had a good feeling about him, so he was put on my team. 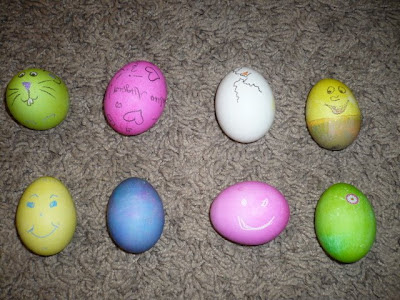 After lining up our eggs in rank and pairing them with their contenders, we made up a bracket. 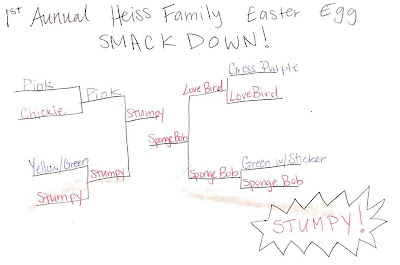 Then we got down on our hands and knees on the kitchen floor and slid our eggs at each other. Whichever egg received the least amount of damage was the winner of the round. As you can see, my eggs totally dominated. I like to chock that up to my tender lovin' care as I decorated them.

When we first started out we slid our eggs across the floor, hard enough to collide but not hard enough to create havoc. As the night wore on, though, things started getting a little crazy. We were whipping them across the room and they would smack into each other and spin out of control, spraying shell and bits of egg white as they went. I think half of our battle wounds happened after the eggs hit each other and ricocheted into furniture or our feet.

SpongeBob went through his first round without a scratch, and although he pulverized LoveBird she did have the chance to mess up his face quite a bit when they were in the ring. 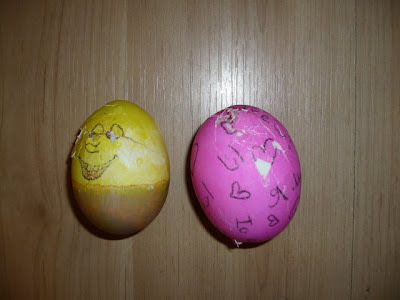 By the time SpongeBob entered the final round, Stumpy tore him in half. There was carnage everywhere. 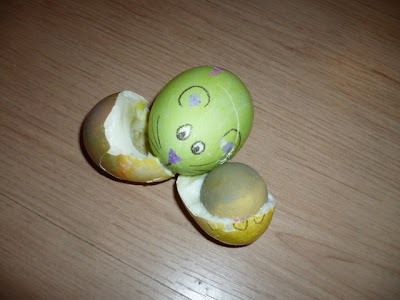 Even though Stumpy is now resting in millions of scrambled pieces and I mourn his cute mousy face, I'm glad that I picked him to be on my team. We totally kicked trash! 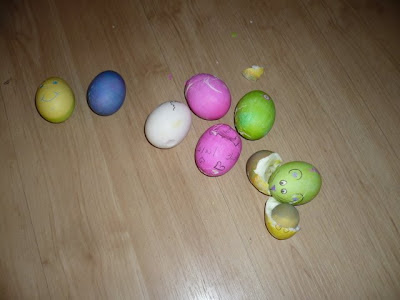 This is definitely something that we'll be doing year after year--it was much more fun than either of us anticipated. However, if we have a child that is like me and who gets rather attached to everything we will have to prepare them for the Smackdown weeks in advance. That child will have to decorate an egg specifically for the Smackdown, thinking the whole time that they are decorating that it is going to be destroyed, otherwise there will be tears. Lots and lots of tears.
Posted by Nancy at 12:57 AM