To their credit, the Great Pyramids are spectacular. I do recommend going to see them, in spite of the fact that they are being completely exploited. It's not their fault they're now a big tourist trap. They were meant to be monumental, which they are, but there are just too many people, both tourist and local, there. Given the choice between Dahshur and the Great Pyramids, I choose Dahshur.

We had an eventful day today. While we were driving out to the pyramids with Emad, he somehow convinced us to take a carriage ride to the pyramids instead of just having him drive us there. Mistake!

I'm sure he thought he was doing us a favor. I mean, he offered to drive us there, but said that we could also take a camel or horse or carriage and that he knew of a great "stable" And that option, obviously, sounded fun. Sounded being the operative word.

So we ended up at a perfume shop where we were given the rundown on Egyptian "aromatheraphy" by a "doctor" and given soda to drink. After we had turned down the perfume salesman (Oh, I mean "doctor") we were given the options for our tour.

Rachel, Karen, and I would share a carriage. Andrew would have to ride a camel since we couldn't all fit in one carriage. 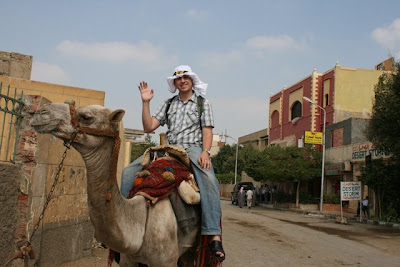 Andrew riding his camel through town
Presently we found ourselves back outside being herded onto a carriage. Andrew disappeared somewhere, but they assured us that we'd meet up with him at the pyramids. And then we took off through town, stopping at a "ticket booth" to purchase our tickets. The tickets were verifiable, but the booth seemed a little iffy. I'm not sure it was an actual state-owned ticket booth because the actual ticket booth is at the entrance to the pyramids.

"This is not a student card. It is a work card."

Do they even have work cards? Whatever. Without Andrew there I didn't have a fight.

So after that little kerfuffle we headed back into Cairene traffic. Rachel wasn't too fond of the ride. She's scared of all animals, apparently, and was really worried about having a horse up front. The ride was also so bumpy that we soon regretted opening up her pop can--it kept sloshing out at her on every bump. I took it away and tried to drink it as fast as I could, but even I was having a hard time drinking it.

We were happy when we came to the gates. Grandma got down first and I handed her Rachel, who, in her excitement to get out of the carriage, jumped a little too hard, sending Grandma sprawling.

Imagine my surprise when I turned around from getting out of the carriage to see Grandma and Rachel on the ground. Grandma was flat on her back, still cradling Rachel.

Poor Karen had stepped down off the sidewalk to be closer to the carriage, in order to get Rachel. When Rachel hit her with more force than she was expecting, she had to take a step backwards, but the curb was right there so she tripped and fell over. It didn't help any that we were on a steep hill...

Rachel came out unscathed, but Grandma cut up her foot pretty badly (we think she maybe kicked a spoke on her way down or something) and hurt her knee...and I'm sure her back and head, as well. It's a good thing she was prepared and had band aides and everything. It took four band aides just to fix up her toes.

All that just to walk through a metal detector before climbing back up on the carriage.

I didn't even end up walking through it because for some reason the guards don't like me to carry Rachel through it. They prefer me to walk around the metal detector, carrying Rachel. I'm not sure what harm they think the metal detector will do to Rachel...or how that really helps with security...

Once we were back on the carriage, being prompted by our worried guide to go "slowly, slowly, slowly," we started zipping past the pyramids. Every time we slowed down I thought we were going to stop, but we kept going and going and going. Our guide was muttering some memorized spiel and we kept zooming along.

Meanwhile, back on the camel...

So, here's Andrew on his camel, racing across the desert, sharing his saddle with the boy who had previously been leading his camel on foot, when the saddle started slipping to one side. Andrew and the boy started leaning to the other side to try to counterbalance their weight, but it was no use and the saddle continued to slip. Soon they found themselves hanging on for dear life while the camel continued its run across the sand. Andrew was clinging to the saddle, his feet barely able to reach the ground, while the boy had his arms wrapped around the camel's neck.

The guide, luckily, was on a horse and was able to get the camel under control before anyone was trampled. Andrew hurt his hand, but he fared rather well when compared to Karen! 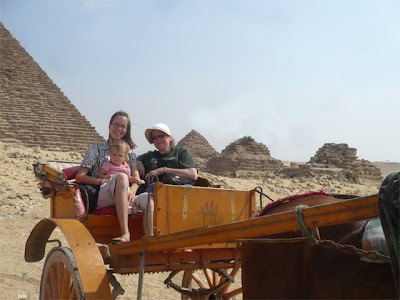 Us on the carriage 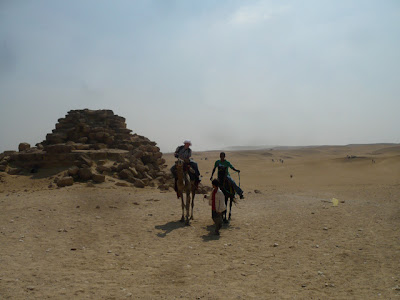 Andrew on his camel
We were glad when we finally met up with Andrew again so that we could exchange horror stories. Oh, and look at the pyramids, too. 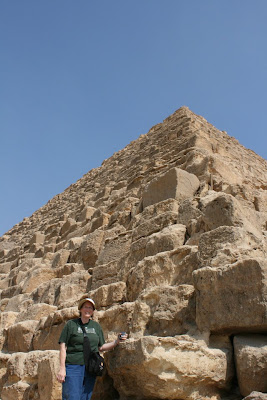 Karen at one of the Great Pyramids 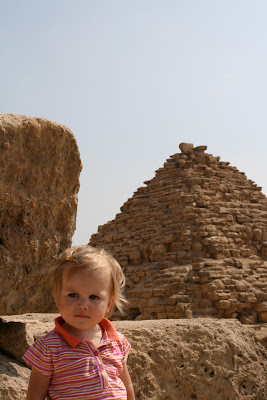 Rachel looking contemplative
We weren't able to climb them very much because a pesky policeman kept following us around and nagging at us. He wanted us to have a tour guide with us and called one over. We ran away when his back was turned so that we wouldn't have to deal with bartering for yet another tourist trap rip-off. 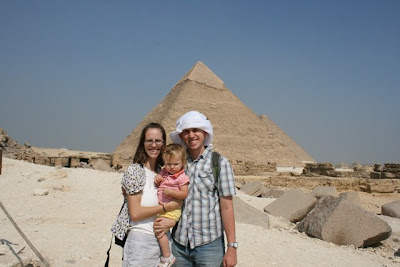 It was fun to see them up close again, though.

After we'd had our fill of the pyramids we headed back to our rides. Andrew's camel guide let us all take turns. Karen was a little nervous at first, but she put a big smile on and bravely mounted the camel. Riding a camel is a rather awkward thing to do; they are just such weird animals. Obviously the whole hump thing is a little odd. 'Nuff said. And then they are so high off the ground and their neck is so long and never seems to point the direction of travel so you end up feeling like you're kind of floating. When they kneel down you have to lean way, far back in your seat, otherwise you end up completely horizontal. And then there's their mouth. That's just gross. They're constantly moaning and smacking their slobbery lips. They're intimidating animals.

I was proud of Karen for trying, but even more proud of Rachel overcoming her fear of camels and taking a short ride across the desert with me. Rachel was terrified of the camel and first and just about died of fright when she was sitting on the camel with Daddy. 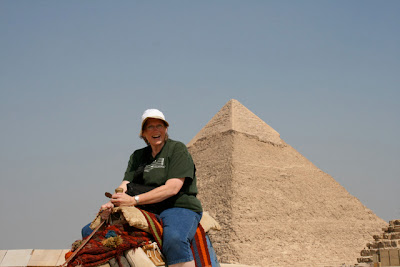 Grandma on the camel 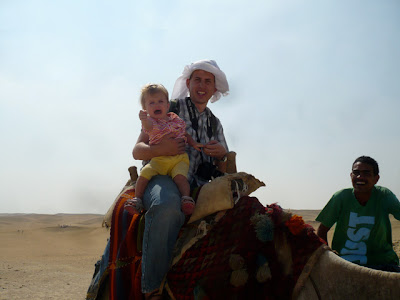 Save me, Mommy!
She doesn't like when they moan and groan, but she will moan and groan back to them. You can hear her doing it in the video...

When I started getting on the camel with her, she was also pretty nervous but she just hugged me tight until the camel stood up. 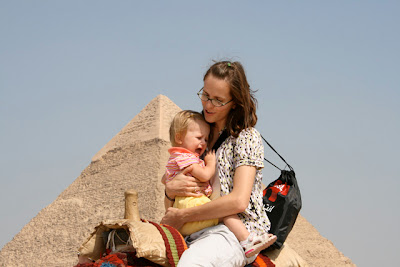 It's okay, baby!
She didn't really relax until after we'd started moving. She started making camel noises and then the camel would make noises back. Soon the guide and I had her performing all sorts of animal noises. After she'd exhausted her reportoire she sank into my arms and relaxed so much that she almost fell asleep. 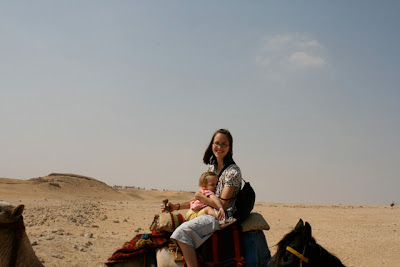 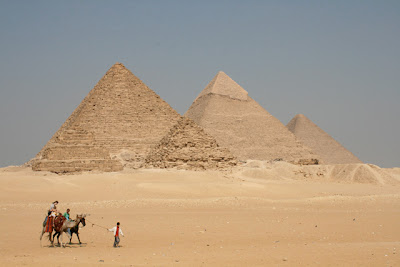 Walking across the desert
The ride was a little too bumpy for her to fall all the way asleep though and also made her realize that she had to go potty. She made her little fist into "potty" and shook it at me. I tried to tell her to hold it, but she just couldn't. Not with the camel plodding along and sloshing her little bladder around. 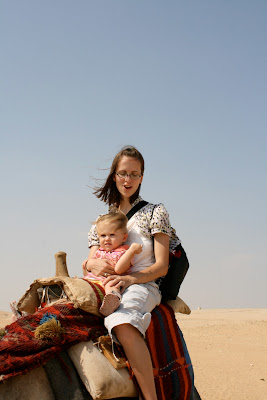 Oh, no! Hold it, Rachel!
She stood up to pee, which I was happy about because she had rubber pants on so they caught all her pee and didn't spill a drop on me! We just lowered her down from the camel, emptied out her rubber pants, and changed her clothes on the spot. 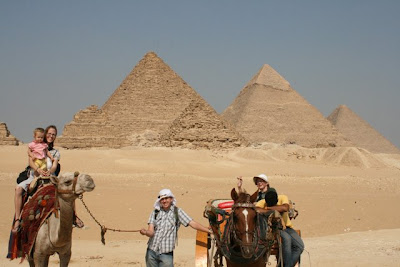 I'm peeing and you want me to smile for a picture?

This might be embarrassing for her a few years down the road, but really it's kind of cool. I mean, how many American children can say that they peed their pants while sitting on a camel and then stripped down naked in the middle of the desert in front of the Great Pyramids? Not many. 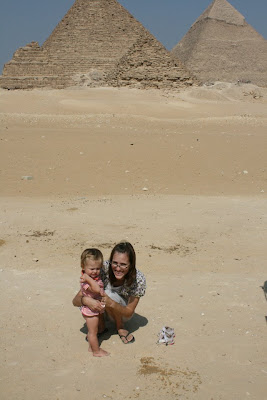 Changing in front of the pyramids. No potties here...

The guides all watched while we changed her. They tried to look like they weren't watching, but I'm pretty sure they peeked because they suddenly all agreeing with each other that she was definitely a "bint" (daughter). People are never quite sure if Rachel is a boy or a girl--they don't really have designated colors for genders here and no one seems to know that Rachel is a girl's name. I'm not sure what they think about her ponytails...

After we'd changed her, Rachel and I got back in the carriage so that we could be pulled by the Sphinx. We were under the impression that we'd be stopping to take pictures, and we did...but only for a split second. Our driver wouldn't stop long enough to let us out to go see the Sphinx and just drove us out of the complex and into the street after we'd shot a few pictures from the carriage. 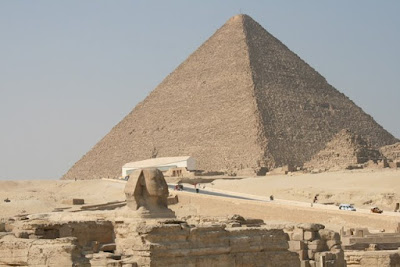 The Sphinx
This was probably for the best because Rachel had somehow managed to fall asleep and I didn't really want to wake her...although I did want to see the Sphinx up close. Maybe next time.

Andrew got stranded inside with his camel because that guide thought we really were going to stop and take pictures. He kept calling my cell phone to see where we were, but I couldn't hear it. He was persistent, though, and kept calling until I eventually felt it vibrating (it rings and vibrates at the same time), but even then it took me a while to find it because Rachel was sleeping on my lap and I had to dig around in my bag to find the phone.

He caught up with us outside the gates and then we had to tip our driver so that he'd take us back to the taxi. Andrew told us to tip him 20 LE, so Karen handed him a 20, which he took willingly, but then he also wanted 20 LE from me.

"I have to talk to my husband first," I informed him, sure that Andrew meant that we would tip him 20 LE, total.

I ended up not tipping him extra. We just hopped in the taxi when we found it and drove away without another word. We learned some valuable lessons, two of the most important being to take a taxi in the complex, and not fall for a 400 LE tourist trap excursion; and that we should wear shoes next time. So, although we suffered some mishaps, I suppose we were happy overall, though it has nothing to do with the carriage driver.