Marooned on a Felucca 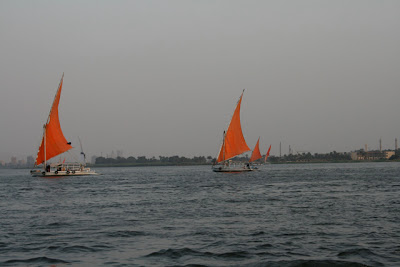 A word of advice for all those of you hoping to ever do anything with us, don't. We are a disaster waiting to happen. We can't even get our backup vacations to run smoothly, let alone our real vacations. Something as simple as a felucca ride should have been relatively easy to pull off without mishap, and I suppose everything started out alright, but we're cursed.

We went out with the Masons, Sharps, and Schillings to take an hour's felucca ride down the Nile.

We met by TGIFriday's on the Corniche--there is a dock right next door and it's an easy landmark to take a cab to. We walked down the stairs, onto a boat, and were off in no time.

Our captain decided to take us to an island. This is a common thing, but usually you just drift by the island, snap a few pictures of the sunset with the reeds, and continue along your way. We didn't do that. Instead we came to a dead stop. And started leaning pretty strong on the larboard. Our captain started looking pretty stressed out. 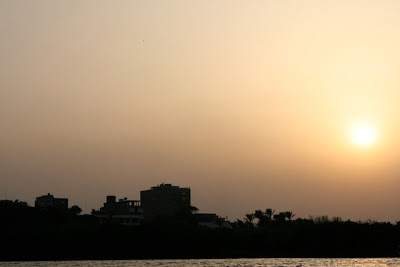 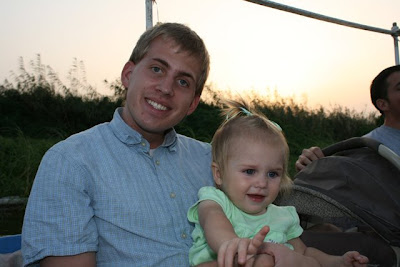 Stuck at the island 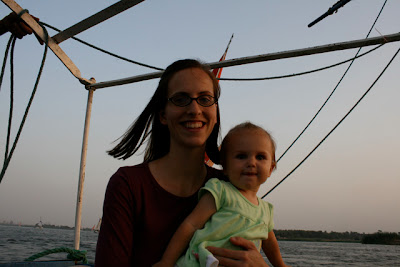 He ran back and forth from stern to to bow, fidgeting with the sails, releasing chains, and kicking at the rudder with his feet. He went from looking pretty stressed out to really stressed out and then like he was going to faint.

It was then that we noticed that he had sliced his pinky open and was dripping blood all over the place. We offered him baby wipes and some band aides, which he gratefully used...not that they helped all that much. It was pretty much a gaping wound and the band aide wasn't doing very much. What he really needed was stitches. 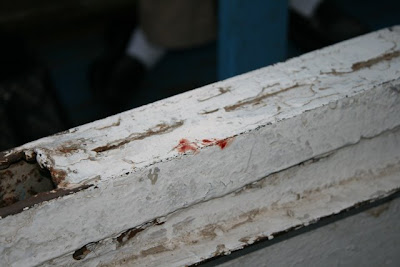 Blood
So, here's our captain running up and down the ship, dripping blood here and there, muttering to himself, while we're just sitting there doing nothing. After he wasn't able to shove us off the island with an oar, we started to wonder if we'd ever make it back. We kept offering to help, not that we knew how to sail a felucca or anything, but he didn't want any assistance from us. Finally he asked if we had a cell phone he could borrow. Andrew handed him a phone and the captain called his friend who sailed over and towed us off the island. 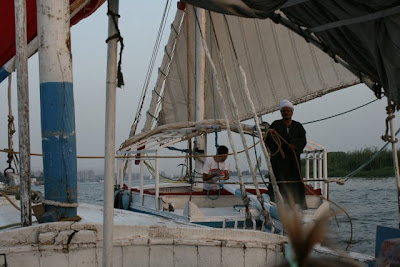 Getting ready to be rescued
Our captain was still pretty embarassed and shaky when we docked. He jumped off our boat and started rigging another one up down the dock. Melissa had to chase after him to pay him a tip. Poor guy. 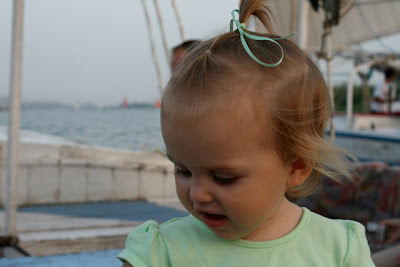 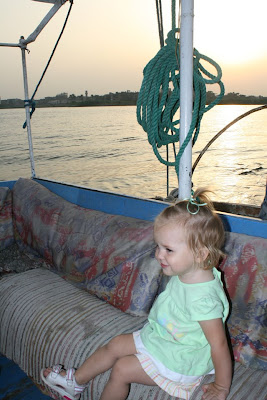 We had fun though, despite being marooned on a random island in the middle of the Nile. 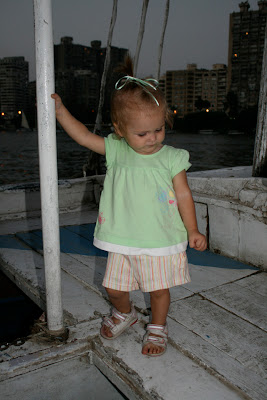 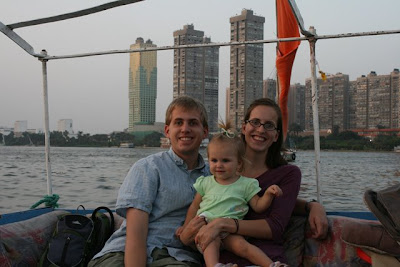 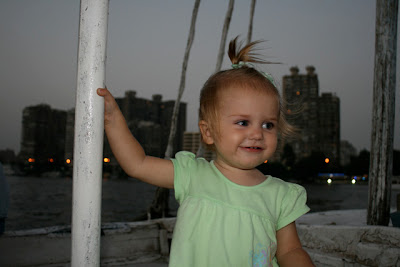 After our felucca ride we went out to dinner at an awesome Thai restaurant called Bhua Kao (on road 151). Andrew ordered the beef red curry and was quite shocked with how spicy it was. His face was turning red and his eyes were watering. He was worried that his mild had gotten mixed up with Josh's medium. I decided to take a bite.

"This isn't spicy," I said after trying some.

"Yes it is," Andrew choked out.

"Maybe he did get mine," Josh suggested, "Mine isn't very spicy..."

He wasn't sure she'd be able to handle it, but I gave her a mouthful anyway. She chewed, swallowed, and then signed more! So, it's official. Andrew is a wimp when it comes to spicy.

My dish, on the other hand, wasn't spicy at all. I ordered a chicken dish so that I wouldn't have to share with Andrew, but I ended up sharing with him, anyway. I got the chicken with cashews and dried peppers--or something like that. It had a really long, descriptive title, of which it was fully deserving. It was so good! The sauce on it was kind of like orange chicken sauce (only it wasn't orange chicken) so I knew Andrew would like it, which he did.

Let's just say I wasn't disappointed with dinner and we'll be going back to Bhua Kao again, only next time Andrew will order the chicken with cashews and dried peppers while I'll probably try the sizzler platter. That looked good, too!
Posted by Nancy at 10:40 AM