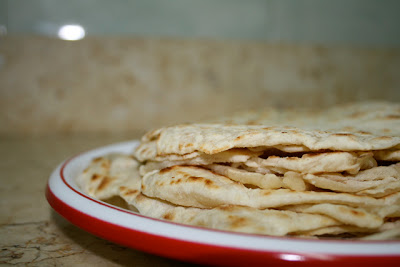 Sometimes when we're isolated in the far reaches of the world we get hankering for food that is just hard to find. Sometimes it's too expensive and sometimes it just can't be found.

Well, folks, desperate times call for desperate measures and since we finally have internet at home, I looked up a tortilla recipe. A package of tortillas here, if you can find them, costs around 20 LE. That's like $4!

I've always been a little intimidated by tortillas. I don't know why because I made pizza dough every week when we lived in America and that didn't kill me. Shoot, I even made my own pita bread--because that's like $4 for a package in America, which is a ridiculous price (and we were isolated in the far reaches of the world, away from pita bread!). I can make pancakes. I can make cakes and cookies and biscuits....So I really should be able to make tortillas, right?

I think I was so afraid to try because I tried making tortillas once. At my very first YW camp, actually. We had tacos for dinner, which included making our own tortilla shells and cooking them over the open fire. Keep in mind that we were a bunch of Canadians--Mexican food isn't all over the place up there--and that this the same camp that we made strawberry shortcake, dutch-oven style, and burned through the pot. We were hungry during this camp. A lot.

From what I remembered, making tortillas was really hard.

But I convinced myself to try again since it's been 11 years since that fateful camp and I've since cooked a lot of things rather successfully. Oh, and because we are isolated in the far reaches of the world where one package of tortillas costs like $4!

So, even though it was 11 PM, Andrew and I headed into the kitchen to experiment.

It was so easy! It helped that I searched for "easiest best tortilla recipe" because this certainly was the easiest, best tortilla recipe out there. All the other ones that I looked at sounded much too involved and confusing. This one was simple: mix, roll, cook, eat. I can handle that.

We had fun taking turns rolling out the dough and flipping the tortillas in the pan. Andrew was much better at flipping them than I was. He was doing 360s and things while I was flipping them out of the pan and across the room. 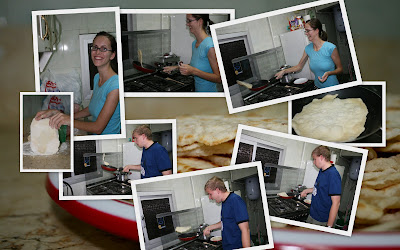 We may very well be switching our traditional homemade pizza night to homemade tortilla night. Mexican food might be hard to find, but not as hard as finding the ingredients for good pizza; pepperoni is absolutely impossible! We'll have to stick to delivery for that...
Posted by Nancy at 6:14 PM