Our Islamic Cairo tour started off with a heave and a gag, and as the taxi pulled up in front of Sultan Hassan I found myself covered, once more, in Rachel throw-up. She'd been a little melancholic this morning but I just assumed that was because she was still sleepy when we left the house. I assumed wrong.

Lucky for me it was just grapes, rice krispies, and breast milk so nothing smelled too putrid or dyed my clothes red. It was just like really, really chunky baby spit up. We think it was the grapes that did Rachel in this time--they were left over from Grandma's dinner at Lucille's last night and Rachel ate some for breakfast. That's the only thing she ate that no one else did, and since she's the only one who lost her breakfast we're assuming it was a bit of food poisoning.

We momentarily considered having Rachel and I turn around and go back home, but in the end decided we should stay. Rachel already seemed to be perking up and convincing our taxi driver to take us back, puke covered, and for a reasonable rate seemed too ominous of a task.

So we stayed. Andrew got to tie the burp cloth to his backpack so that it could air dry, which was nice of him. It meant that all three of us went around the whole day smelling like throw up. Grandma was the only one who got off the hook. 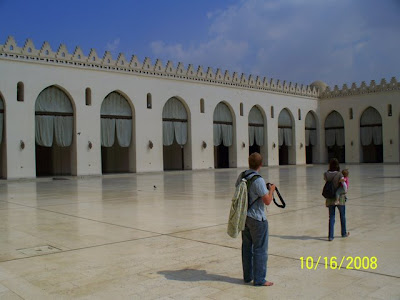 Andrew takes his blankey everywhere
Rest assured the rest of our day went much smoother. Rachel was amazingly well behaved and held her potties for the whole 7 hours we were gone (apparently Islamic Cairo tours are always long). We learned that most mosques have toilets, which is nice to know when you're taking a potty-trained one year old around all day. Finding toilets quickly is definitely a neccessity because when she starts waving her little fist around, signing "potty," it means that she needs a potty ASAP. Finding toilets is easy since mosques in Cairo are probably more plentiful than LDS chapels in Orem.

She tried to use a squatter toilet at Ibn Tuloun, but that was far too scary for her so she held everything in until we got to Al-Azhar at the very end of our day. She was so happy to see a normal potty and had been holding her pee for seven hours so she didn't even put up a fuss about having to use a "big girl" potty.

We first went into Sultan Hassan Mosque. It is huge. 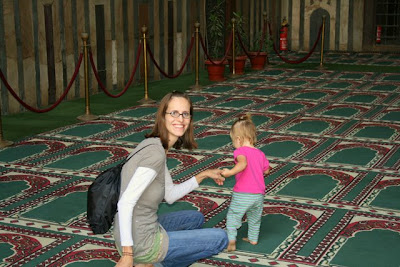 
Rachel had a fun time running around. She always likes to explore mosques. There was a cute little kitty inside and Rachel thought long and hard about petting it; when it finally came up to her she screamed and hid behind my leg. 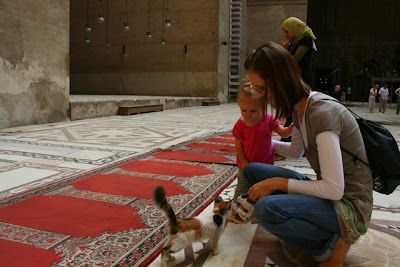 Make it go away, mom!
The cat was really interested in Rachel and didn't want to leave her alone. Rachel kept screaming at it until it decided Rachel wasn't too friendly. I guess we've taught her well about Cairo street cats: don't touch.

Andrew explained about the four different schools of Islamic thought, how the mihrab points to Mecca, and various other topics to Karen and me while he pointed different things out in the mosque. Apparently Rachel was paying attention. She decided to kneel down and say a little prayer herself. 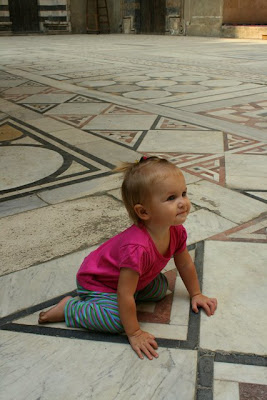 So...which way is Mecca?
Rachel really got her energy back at Al Rifai Mosque. 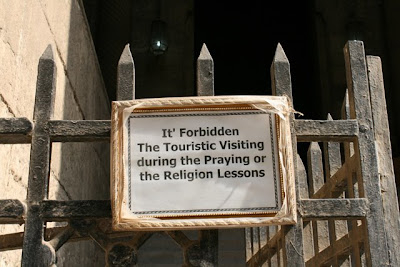 Good thing we got there before it was time for the praying! 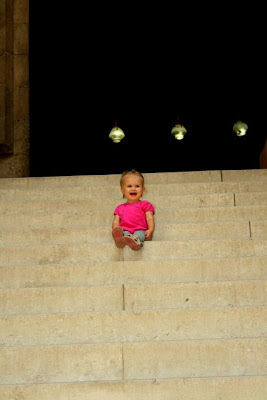 I climbeded the stairs all by myself!
Her favorite room was the room where the shah of Iran was burried. It had nice, cool marble floors and great acoustics. She spent a lot of her time spinning around and singing to herself...until she remembered that, although she technically had breakfast, she was hungry. 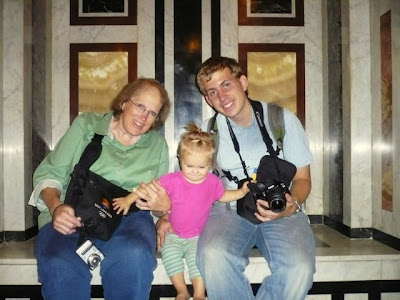 Let me down so I can spin some more! 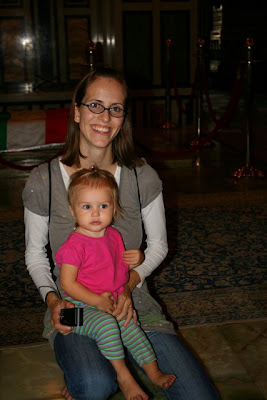 Mommy, you remind me I'm hungry.
She and I spent the rest of our time breast feeding in a dark, forgotten corner near the woman's section of the mosque while Daddy and Grandma explored some more tombs. Daddy still had the burp cloth tied to his backpack so I didn't really have anything to cover up with, which is why we hid out in the dark and forgotten corner. Rachel isn't very good at being discrete and so we were hoping that no one would spy on us there. Plus there was a bench to sit on. I think we ended up choosing a very good spot because when Daddy and Grandma came out from the back rooms they couldn't find us for a long time even though I was yelling and waving from my secret corner. 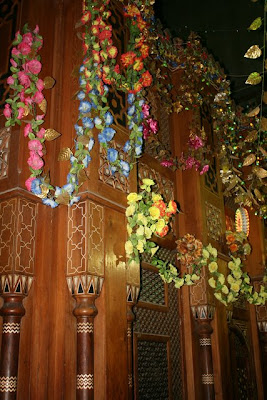 A tomb--doesn't it look like it should be in India?
Eventually Grandma spotted us and we all had a nice rest while Rachel finished second breakfast. When she was finished we made our way to Ibn Tulun.

Andrew went around to see if the minaret was open while Grandma, Rachel and I went inside the mosque--we carried our shoes so that we would have to wear those ridiculous booties. We were happy to see him way up at the top of the minaret because that meant that it was unlocked this time! 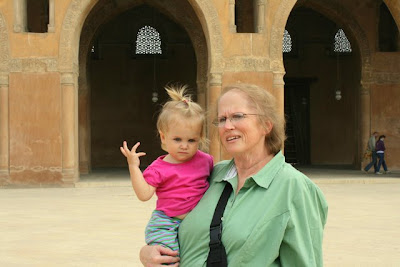 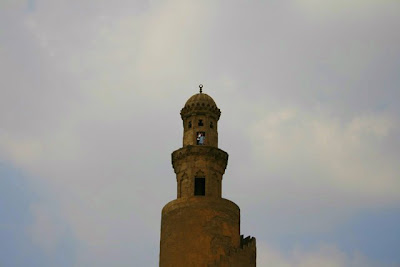 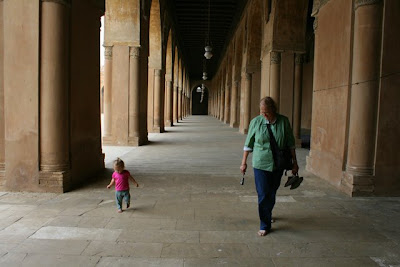 Rachel and Grandma walking in Ibn Tulun
We took turns going up the minaret because there isn't much of a wall at the top and we were too scared to take Rachel up there. Maybe when she's (a lot) older. She hung out on the roof with Daddy while Grandma and I went up. We were both too chicken to go up to the very top window, though. 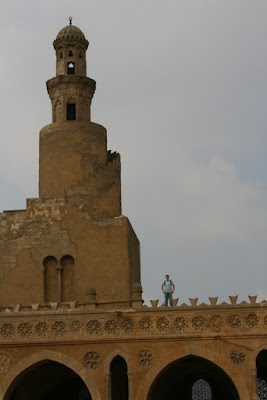 Andrew on the roof 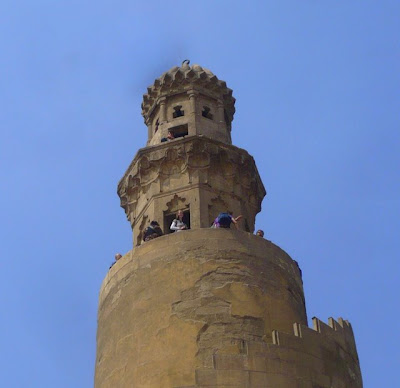 Me on the minaret 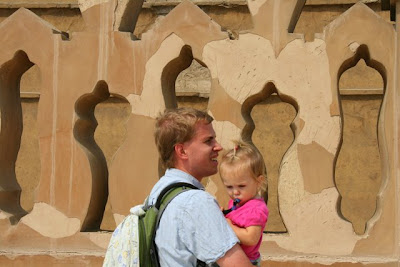 Rachel and Daddy on the roof


While we were taking turns climbing the minaret and playing on the roof the call to prayer sounded. It was neat to hear it echoing all around us while we were so close to an actual minaret. Unfortunately they don't use that minaret anymore...which is probably why they let tourists tramp up and down it all day long. 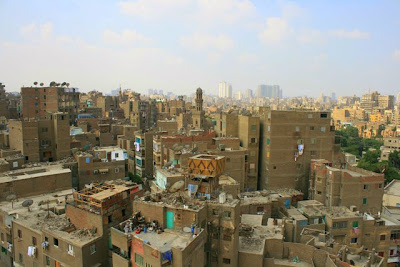 Bird's eye view of Cairo from the roof of Ibn Tulun
When we were finished there we caught a cab to Bab al-Futuh so that we could walk down Sharia al-Muizz li-Din Allah and into Khan al-Khalili. Remarkably enough, it took us a long time to find a taxi driver who said that they knew what Bab al-Futuh was, and even then he drove us to Khan al-Kalili and tried to make us get out. Andrew insisted that we be taken to Bab al-Futuh and our taxi driver asked several people, including Andrew, for directions. Eventually we did find it and were able to walk Karen down the street.

It's a nice place to walk because the traffic isn't bad at all. Cars aren't, typically, allowed in Old Cairo so it's fairly quiet and you can take time to look at the buildings and things without worrying about being squashed. 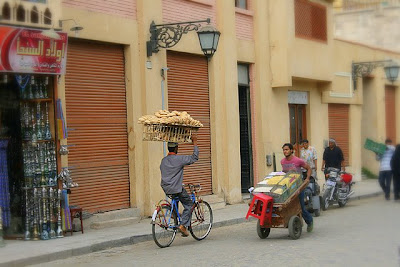 Never ceases to amaze me


We stopped to see a few more mosques, including al-Hakim bi-Amr Allah and al-Aqmar. 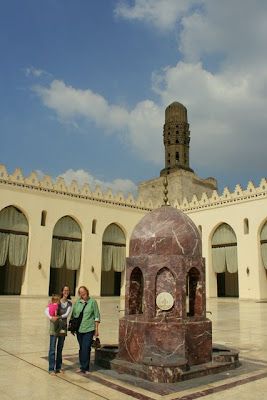 
Soon the more native, residential feel of Old Cairo gave way to souvenier shops and we knew we had stumbled into the Khan. 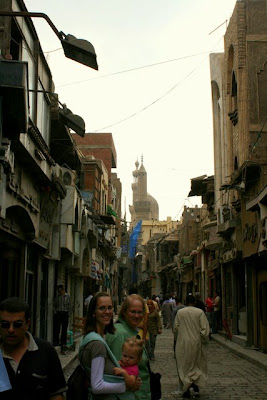 Me, Rachel, and Grandma heading into Khan al-Khalili 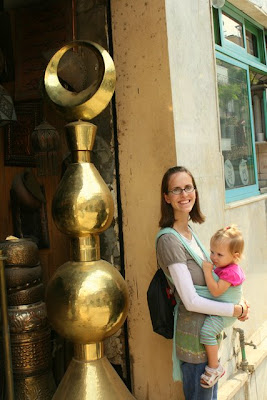 Wanna buy a minaret topper?
We looked at several booths and shops, finding a shirt for Karen, some new sandals for Andrew (that boy goes through them like water), a Halloween costume for Rachel, and some scarves for both Karen and I so that we wouldn't have to borrow the icky used-a-million-times-and-never-washed ones at Al Azhar. We also stumbled upon this little number... 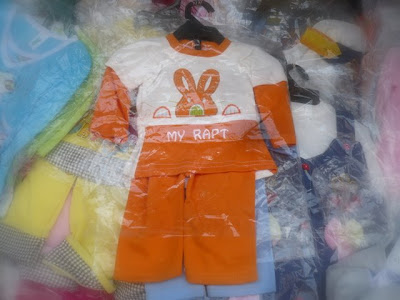 My rapt?
...and really wanted to get one for Rachel, but they didn't have one in her size. Rather unfortunate, don't you think, because I really see her as my little bunny "rapt." We may just have to go back and get it so that we can take embarrassing photos of our subsequent children wearing it. And when they fail their third grade spelling test they can take that picture to their psychologist and blame all their emotional problems on us.

When we felt we had wandered aimlessly around Khan al-Khalili long enough we headed over to Al Azhar mosque, our final stop in our Islamic Cairo tour. Oddly enough, this tour was about an hour longer than our first one two years ago but we endured it much better. I think there are several reasons for this--having Rachel with us is not one of them--including the fact that it's October, not July; and that we brought plenty of water and snacks; and that we were expecting it to be a day trip and not just a couple of hours; and that Andrew had since studied most of the history behind these mosques at school and now found them interesting.

I was still happy that we'd come to the end of our tour, though! There were still so many mosques left unseen, but we were all hot, dirty, hungry, and tired. And seriously, after seven hours enough was enough, even for a history enthusist like Andrew. 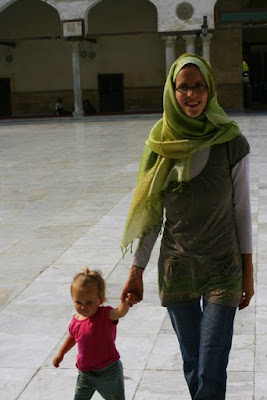 Me, veiled at Al Azhar 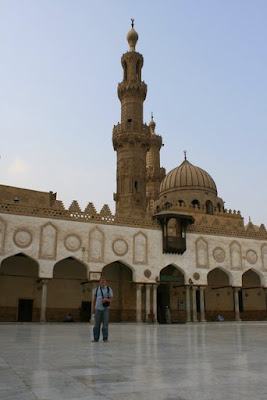 Amazingly enough, Rachel was the only one who didn't want to go home. She was having such a fun time running around the columns that we had to almost drag her outside...and then she threw a huge fit about getting in the taxi to come home. 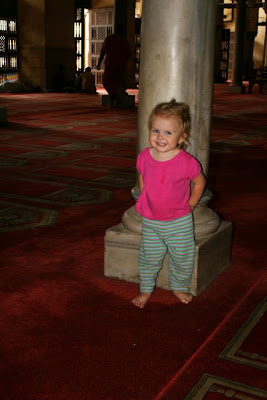 I'm hiding behind this column and you can't see me...
It didn't take her long to fall asleep once we were home, though. We really wore her out!
Posted by Nancy at 3:38 PM