I was just hanging some laundry up to dry which meant that I was out on the balcony by myself, leaving Rachel and Daddy in the kitchen making lunch unsupervised. Big mistake!

When I had finished with the laundry I walked back into the house and noticed a firey-smokey smell. Andrew greeted me by the balcony door dancing and singing,

Long story short, he used a simmer ring to boil soup. This was a bad idea. The handle of the simmer ring caught on fire and now our kitchen smells great.

Andrew used to have this problem of turning up the heat so high that the flames would lick the plastic handles of our pot and they would melt and it smelled horrible. So I've been trying to train him to watch the level of the flame while he turns it up so that it all stays under the pot.

He thought the simmer ring would solve that problem. Today was his first time using it, though, and he seemed to be able to ignore all the very obvious labeling on the package.

I could go on, but it's fairly obvious to me that this is a "simmer" plate, not a "boil on the highest temperature possible" plate.

"Wow, honey! This is the second time you've started a fire in our kitchen since we've been married," I remarked.

The first time was like a year and a half ago, so really I thought he was doing pretty good. Until he corrected me.

"Actually," he said, "I caught the popcorn on fire last night, too. So this is the third time I've started a fire since we've been married and the second time in two days." 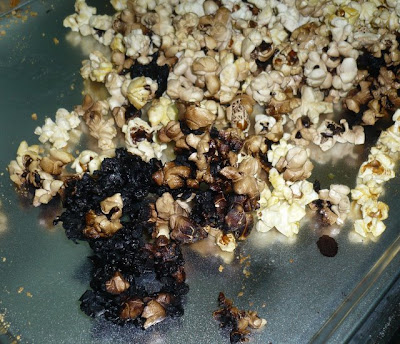 I don't know how I forgot about the popcorn, but I did. Let's hope this seemingly new trend does not continue.
Posted by Nancy at 8:28 AM