While we were walking home from church last Friday it rained.

With the rain came a sudden drop of temperature that promised of cold, but wasn't actually cold.

We're missing autumn; both Andrew and I like fall. I like the crisp weather before it gets cold. I like the leaves changing color. I like Thanksgiving and (yes, mom) Halloween and Thanksgiving (yes, twice). I like pumpkins and apples and cider and the smell of cinnamon. I like a lot about fall. In fact, I think the only thing I don't like about it is that it leads to winter.

Here we've hit the chilly fall weather. It's in the mid-to-high twenties and people, locals mostly, are already digging out their winter coats.

One of Andrew's teacher's today remarked that she was shocked at how cold it got this early in the year. That it might get a little colder in December, but that this was pretty bad. She, herself, was sporting a winter coat.

I think it's odd that some buildings are still running air conditioners and people wear their coats outside.

But maybe that's just me.

We did buy blankets for our beds, but that's just a joke. Andrew still has the fan on because he can't keep the blankets on unless the fan is also on because he gets too hot.

It's obviously not so cold that the leaves are changing color. I really doubt that will happen here. If it did get that cold I don't think the trees would know what to do, so they'd just stay green anyway.

So, we're missing the leaves changing color and there's really no hint of winter on the air, at least not winter as we know it. We aren't going to have any frosty mornings and we won't be going trick-or-treating, but we're still having a little fall fun.

A few days ago Rachel and I dressed up in costumes and made a ghost together. We hung it up in her playroom. She thinks it's pretty cool. She points to it whenever we say "ghost" and we're trying to teach her that ghosts say "Ooooo!" She doesn't quite get that yet and makes the same noise that she makes for everything, which is kind of like a cross between a dog and a monkey. 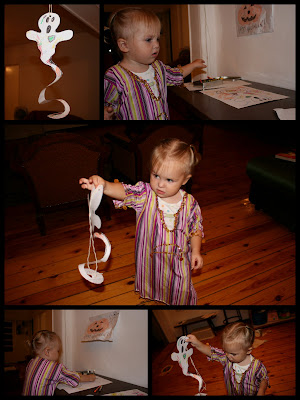 Look at my dhost!
Tonight for our FHE activity we made a family "thumbkin" patch. Rachel had so much fun that she threw a fit about having to go to bed. She wanted to keep making thumbprints and was quite upset when we tried to wash off her hands. Andrew was also pretty upset when it was time to wash off his hands, but for a completely different reason than Rachel. He was perplexed because the ink didn't seem to be coming off...so I had him wash some dishes. That did the trick! 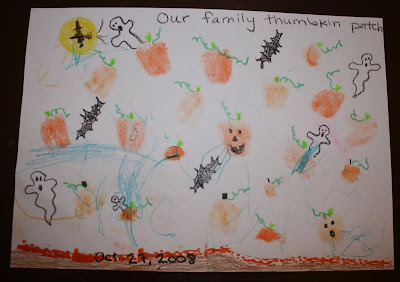 I'm trying to find other (super-duper easy) crafts for Rachel to do. She would be happy just coloring all day long but she's always so pleased with herself when she does something a little more than just coloring (like making a ghost). We'll see what we come up with since our resources here are so limited.
Posted by Nancy at 5:41 PM