Our plans for Eid al Fitr, the 3 day vacation after Ramadan, included heading out to the once-fishing-village-gone-resort town of Hurghada, which lies along the Red Sea coastline. We were looking forward to getting out of the business of Cairo, resting on the beach and snorkeling.

We booked our trip 10 days ago, the van through Ali—a local travel agent, the hotel through Agoda—a rip-off online booking agency. We noticed that our vouchers said only 1 adult had booked the room and talked to Agoda about it. They said we could talk to the hotel about it or that they could fix it for $80. We talked to the hotel about it and they said that they would fix the problem for free. We talked to Agoda again and they said that if we had any problems checking in when we got there to give them a call. We thought we were in pretty good hands, having the promise of the hotel that they’d fix the problem. Clearly we had wanted a room for two people, not one.

So we got up on Tuesday in good faith, and joined the Masons and Sharps in our rented van. It was supposed to be an eleven-seater, which I suppose it was, but when I first looked inside all I counted in the back was 6. They had installed the backseat in the trunk of the van and were putting our luggage on top of it. We convinced them to put the luggage on top of the van—since we needed all nine seats for our group of nine, go figure—and they did so, although grudgingly.

When we had seen to it that the luggage was tied down securely enough we filed into the van and were off across the desert.

Our first stop was at St. Anthony’s monastery. That was definitely the highlight of our vacation, which isn’t saying much since our vacation was, as Sara put it, crap-tastic. As far as monasteries go, though, St. Anthony’s is pretty cool, but we’ll talk about that later… After touring the monastery with an overly-friendly monk named Ruwis and getting some pita burgers at the Canteen we were on the road again. 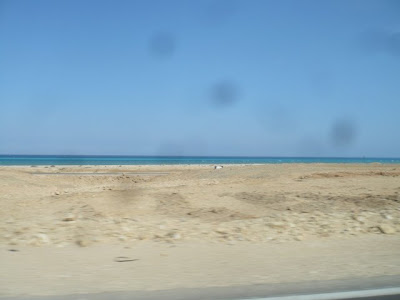 The Red Sea from our van 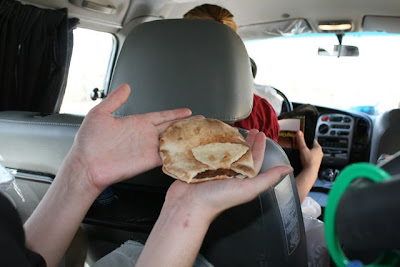 Pita burger
Shortly before sunset, we arrived in Hurghada tired, cramped, and in need of a soft bed. After driving around for a half hour or so trying to find our hotel, our drivers dropped us off at the curb and zoomed off into the sunset. We bustled in to check in to our rooms.

The kids had all had it, so Andrew, Patrick, and Tanner went up to the checkout desk while Melissa, Lora, and I tended to Finn, Abby, and Rachel. Finn was fussy, Rachel kept running around and touching everything breakable, and Abby wanted to eat. We were all pretty frazzled and were really looking forward to those nice, soft beds I referred to earlier.

And then the bad news came. The hotel would not allow us to check in to our rooms because we had only reserved the room for one person. Even though there were two beds in each room. Even though we had talked to them on the phone and emailed them about our situation and they promised it would be taken care of…they said we were out of luck.

We talked with management again. The manager said that there were no open rooms in the whole city so our only choice was to pay the extra 80 euro a night or leave.

Patrick called Ali and he was able to get a hold of the drivers before they were too far away. Luckily the van was only about 100 km away and they were able to turn around to pick us up. Unfortunately in order to cross the desert back into Cairo you need security clearance. Ours was not due until Friday, but since we no longer had a place to stay we were left with no choice but to head out illegally across the desert.

Fairly miserable, we sat outside of the hotel with our luggage, waiting for the van, and eating bread and jam we had purchased for dinner at a little market. 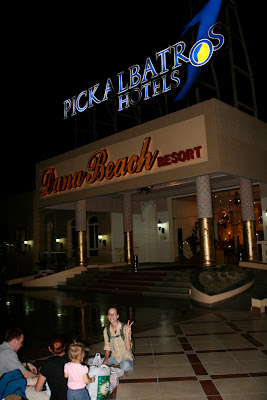 The van arrived at around 7:30 and we piled in, once more, for our 5 hour trek across the desert. Rachel was a gem once again and fell asleep soon after we got settled—in the front seats this time; much more leg room. We all joked with bated breath about how we’d get through the first checkpoint.

“How do you even go about bribing someone?” Melissa wondered aloud while Tanner suggested that we hold a cell phone flashlight up to our faces and tell scary stories. “Have you heard the one about the one-eyed police officer?” he began.

All too soon we arrived at the first checkpoint. We pulled over. The police asked for ID from our drivers and then for our passports. They talked back and forth and then Andrew started talking with them as well. The drivers went into the office and talked with the guards and then came back out and got Andrew. 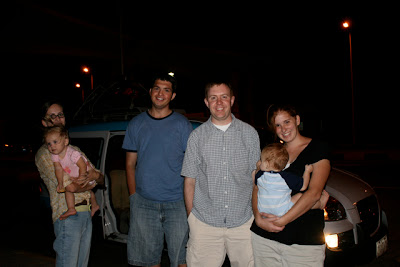 Waiting outside our van at the checkpoint

Back in the van, we were speculating about what was going on. Was he attempting that bribe we had discussed? Was he succeeding? Was he going to be arrested?

He was in there for a long, long time. Finally we decided that we should send someone else in so that Andrew didn’t have to take the heat alone. Tanner was kind enough to volunteer. He walked into the office and joined Andrew. They were both in there for quite a while longer until they rushed out, both looking a little embarrassed.

They came back to the van, talked to the drivers, and then came back to fill in the details for the rest of us.

Turns out, while we were worrying about torture and other things, Andrew and Tanner were having a great time joking around with the police, especially Andrew. He had already told the guards all about our dilemma and why we had tourist visas instead of student visas and what we were doing in the country and why and everything else when Tanner walked in.

“Oh, he’s with us,” Andrew told the guards, “He doesn’t speak very much Arabic. We can say whatever we want about him.”

The guards thought that was pretty funny and they all started joking around again until they remembered that they had been watching a movie, a fact that they pointed out to Tanner and Andrew.

“Have you ever seen this movie?” they asked, “It’s an American one!”

At that point, the gun scene led into a rather indecent sex-filled scene.

“I have never seen such a film in all my life!” Andrew managed to squeak out in nervous fusHa.

The guards busted up laughing and Andrew and Tanner hightailed it out of there. We were informed that we would need a police escort to Cairo and were detained at the checkpoint for what seemed like forever (but was probably only an hour and a half or so) until our escort vehicle arrived. Then we drove 55 stinking kilometers an hour behind police trucks, stopping every half hour or so to change escorts. The ride was tedious and all the stopping disturbed our sleeping babies—we had to quiet them down every time we stopped. Finally, we got behind an escort that drove 90 km/hr, but that only lasted for about 10 minutes. Then we were brought to a grinding halt and a police officer got out of the truck and talked with our driver behind the van. He then hopped in the van with us and we dropped him off at the next town and were free of our police escorts.

I don’t know what went on behind the van, but I have a feeling it was more than a friendly cigarette break.

I don’t know that I care what happened back there because we were off like a rocket after that. We arrived in Cairo around 3:30 in the morning, completely exhausted and utterly disappointed, our crap-tastic vacation drawn to an anticlimactic close. We saw nothing, did nothing, and didn’t even get a t-shirt!
Posted by Nancy at 9:29 AM