We eased Karen into life in Egypt yesterday by taking a little walk around Maadi before Andrew left for school (his Arabic teacher told him he could skip class so he didn't have to go to school until the afternoon). After Andrew left us, we looked at a few souvenir shops on Road 9 and walked to the church. Rachel and Grandma were both really tired so they had to come home and take naps. They felt much better when they woke up and we were able to go to the playground at Victoria College. It was our first time going there and we actually had a very nice time, even though we had to cross Midan Victoria. 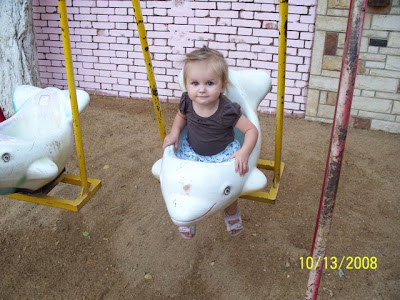 I hate Midan Victoria, the traffic circle on Boor Said, because I hate Boor Said. It's probably one of the busiest roads in Maadi, which is otherwise a relatively quiet district of Cairo.

When we were coming home from the playground and were getting ready to cross the midan Karen got hit by a car.

How's that for easing into Egyptian life?

We were just leaving the gates of the park and a car drove by slowly. Apparently they were trying to get into the parking lot but didn't really know where they were going, so they missed the gate. I was postive they saw us walking there because they were driving so slowly...and looking our way...but apparently they didn't see us because they threw the car in reverse and started coming straight at us.

Rachel and I were able to get out of the way, but Karen was right in their path.

She just put her hand out and hit their car like she'd been dealing with Cairene traffic her whole life. It's a good thing they were going slow--they were able to stop before actually running her down!

Now that Karen has proved herself worthy to deal with the traffic here, Rachel and I took her downtown so that we could visit the Egyptian Museum today. 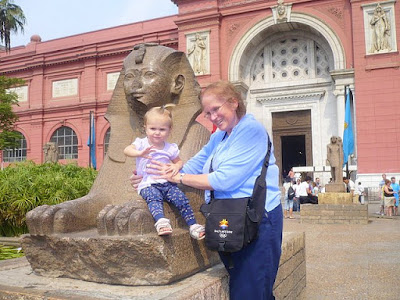 Sarcophagi and statues litter the floor. Tapestries and mummy wrappings are hung on the walls. Cases and cases and cases of trinkets line the hallways.

The best part about it is that nothing is clearly labeled. There are a few labels explanations here and there. Most of them were typed up on a typewriter decades ago. Some of them are handwritten on lined paper. If you're really lucky there will be a label and an explanation and a translation all together. But only if you're really lucky.

Mostly you just wander around looking at things, guessing at what they are, and enjoying the abundance of history the Egypt holds. Because there really is a whole lot of history here--and a lot of it is remarkably well preserved.

Miraculously well preserved, really, considering the lack of conservation they have. The air is not environmentally controlled--it's so hot and steamy in there because the only room with A/C is the Tutankhamun exhibit--and the cases are all older than old. Some of the cases had packing tape sealing up the glass because the 50 year old seals no longer seal. They also have a lot of things, (sarcophogi and statues, among other things) just sitting out in the open.

We didn't see even half of the museum, I'm sure, before Rachel was ready to call it a day. She refused to use the potty at the museum (granted, it was pretty scary looking) and her "bucking bronco" tantrums were coming closer and closer together. She was so excited when we told her we were going to go outside. As soon as she saw the door she made a break for it.

She had fun chasing Grandma around the gardens. 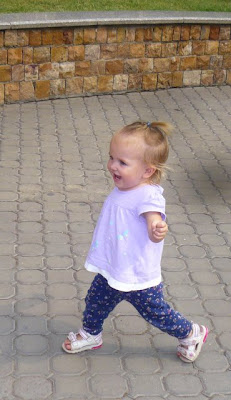 I'm going to get you, Grandma!
We went to lunch at KFC, right by the downtown AUC campus. That was a less than pleasant experience, but at least we got to eat something...and Rachel found their WC to be much more conducive to her potty business.

She was such a trooper the whole day. She walked a lot, she didn't scream on the metro, and she did a fabulous job at not touching things in the museum. 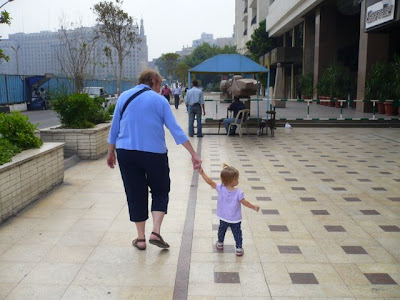 Walking back to the metro station
Tomorrow we're heading out to another museum, so we'll see how long her good behavior holds up.
Posted by Nancy at 3:28 PM