Our little branch was visited by Elder Holland of the Quorum of the Twelve Apostles and his wife, and Elder Snow of the Seventy and his wife this evening. I suppose our branch, with its 80+ members, is technically rather large, but the meeting was still very personal.

That made me think about how important the church is in my life. I need my branch family here! I don't know how I would survive life in Egypt without the church. Having the McCallisters open their home to us so while we looked for an apartment, immediately being fellowshipped by the sisters in the branch, having so many "siblings" for Rachel to run around with have been such blessings in my life.

It's not that I don't miss my family, but I'm really not homesick. I love my family and I need them, too, and it's been so wonderful having Karen here, but I know that my branch family will take care of me and I'll help take care of them.

That's just how things work in our church. We're a family.

I can't imagine how lonely I'd be if I didn't go to church every Friday to see my "family." And it isn't just a social thing, either. I definitely need the spiritual nourishment offered as well.

I was touched by Sister Holland's words when she mentioned praying every day for what Heavenly Father would have us do. I am a list maker, and I try to pray every morning, but I don't think I've ever prayed to have my day go as Heavenly Father would have it go. I usually pray to have my day go how I want it to go. She definitely made me think that I need to involve prayer in more of my daily decisions so that I can be on the Lord's errand more often.

She talked a lot about how the light and love of Christ can heal anything in our lives.

Elder Holland is so funny. He had us all laughing, frequently. He even sang some Fiddler on the Roof when he mentioned that we don't bet and shouldn't even appear to look like we bet, but that if he were a betting man...

"That sounds like Tevye!" he declared, stopping his train of thought and bursting into song, "If I were a betting man! Ya-da-de-da...anyway..."

He said that if he were a betting man, he'd bet on the church. Other things will falter: politics, the economy, men. But the church will remain strong. We are going forward and we aren't going back.

The Middle East and North Africa has just been made into its own area--we're no longer the little pretend area that we once were. We're a fully functioning, albeit fledgling, area.

No proselyting. But we're represented with Humanitarian Missionaries and can answer any questions asked.

When he opened up for questions and answers, someone asked how the General Authorities go about making decisions, like on whether to make the Middle East an area, and so forth. In answering, Elder Holland bore testimony of the miracle of the restoration of the gospel, that it was revealed to a mere boy! But is so perfect.

They use D&C 107, which was revealed to Joseph Smith before they even really used the seventies, but now is so needed to guide the quorums of the seventy daily.

Having him answer our questions so personally was amazing. And then after the meeting was over he stood there and met with each of us, one by one, shaking our hands and taking pictures, even though I'm sure he was travel-weary. It reminded me of how the Savior didn't turn anyone away that wanted to be in his presence. Elder Holland is a special witness of the Savior, and it was special to be in his presence. He even shook Rachel's hand--and she let him, too! 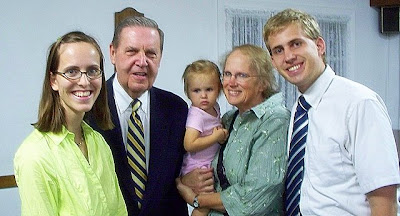 Anyway, I suppose I should get going to bed. We were out much too late and I feel like I'm rambling. I didn't take notes (Lydia did--her post makes much more sense than mine) and missed half of every talk because I was busy keeping Rachel happy. I was sad to miss the apostolic blessing that Elder Holland gave our branch, but since Rachel was busy making animal noises and screaming, we were out in the hall.
Posted by Nancy at 5:26 PM