Andrew and I were making pancakes for dinner a few days ago and when I was measuring out the flour I spotted a weevil. I just grabbed a spoon, scooped out the weevil, threw it in the trash, and continued measuring the flour. I didn't miss a beat.

Weevils just don't bother me that much. They bother Andrew, though.

"Pour slowly," he instructed, "So that I can make sure there aren't any more bugs..."

I poured slowly and we didn't find any more bugs. That said, our flour might find its way into the freezer for a few days just to be sure. Andrew was really grossed out by these little bugs, which I thought was so funny because he deals with cockroaches just fine. I don't, but I can do weevils.

Of course, I do know the bug-eater Jim Thompson of High River, Alberta. I've even eaten dinner at his house, grew up playing with his boys, and helped skin a badger or two. And I survived it all.

Not that I actually enjoy the thought of eating bugs. It's just that these things have been known to happen.

Now, onto my flashback, which for once doesn't occur in Russia, but in good ol' Orem, Utah.

My cousin Heather had slept over the night before. As usual we'd talked well into the night before falling asleep, but not as usual I had to get up in the morning and get ready for my wedding.

I got married in the late afternoon, which was an awesome time to get married, I think. I got to have a very leisure-filled morning. I didn't feel stressed out at all. Well, at least not very much at all. Plus, by the time I was married all the other brides had finished with their pictures and I had the temple to myself.

So, Heather and I slept in. I showered when we woke up, and then she did my makeup because I don't know a thing about how to pretty up my face. We decided, around 11:00, that we should eat brunch. Heather makes a mean mac'n'cheese. Another something that she can do, and I can't. Not even from a box. 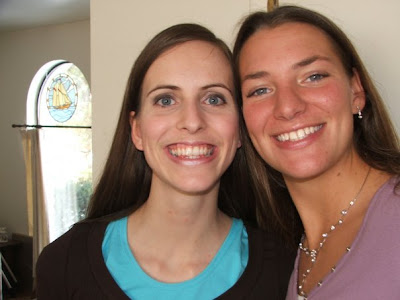 Me and Heather
She grabbed a box and started some water boiling. Then she dumped the noodles in and left them to cook. We went to work on my bouquet while we waited.

When we went to check on the noodles I noticed a bunch of floaties in the water. I pointed them out.

"I dunno," she said. And she probably honestly didn't know what they were. So we just kept cooking.

Our mac'n'cheese was covered in boiled-to-death weevils. And, country girls that we are, we ate it, anyway, after only a moment of hesitation. 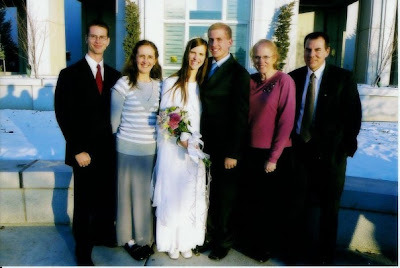