When we went out grocery shopping today Rachel insisted on walking, even though Andrew had already lugged her stroller down the stairs. We didn't want to put the stroller back since we knew we'd need it to wheel our groceries back home. Besides, Rachel doesn't really ever commit to walking long distances.

So, we were walking along with Daddy pushing the stroller and Rachel holding my hand. She was having a great time...until she hit that pothole.

Before I knew it she had slipped out of my grasp and was face down in the middle of the road. She took the brunt of the impact right on her face. It was a pretty sad sight when I picked her up--she had dirt and blood on her nose and mouth.

We checked her all over for scrapes. Apparently she didn't even try to catch herself with her hands because, not only were they perfectly whole, they weren't even dirty.

I had to carry her the rest of the way to the store. She hugged me the whole way there and when I would ask if she was alright she'd just sniff her nose at me to let me know that she was still a little bit sad about the whole situation.

Here she is a few hours later, ready for dinner. Her nose is just a little swollen still, but on the whole she looks much better. 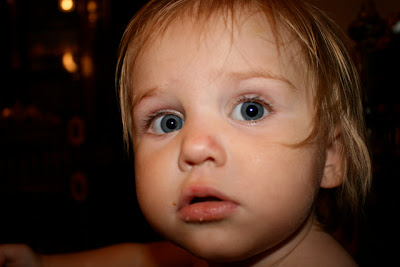 She would bash up her face the day before my mother-in-law comes out.

Karen arrives tomorrow evening. I'm excited, but also rather nervous. Besides Emily, Josie, and Heather and Ryan Adams, I've never had anyone spend the night at our house before, let alone my mother-in-law.

And truthfully I don't know why I'm nervous about that at all. It isn't like Karen and I don't get along. It's just that I have this daughter-in-law complex. I somehow think that I have to prove to her that I'm a domestic goddess, which I'm not. It's funny because it's all self-imposed stress. She doesn't have any unrealistic expectations for me; I make them up for myself. She knows that I don't keep a perfect house, that I'm not a perfect wife, that I'm not a perfect mother...and yet I feel the need to make everything as perfect as possible when she comes over.

I'm not alone in the world, though, because when I mentioned this at playgroup, Melissa and Lora admitted to the same thing. They get along with their mother-in-laws royally--but still feel this need to impress them. Maybe that feeling goes away the longer you've been married. I don't know.
Posted by Nancy at 12:06 PM