This evening after the fireside we were out in the sun room munching on cookies. I was eating an oatmeal cookie and had one of the brownies (technically a blondie) that we had made this morning on a napkin in my hand. Rachel was sitting beside me eating her own blondie. 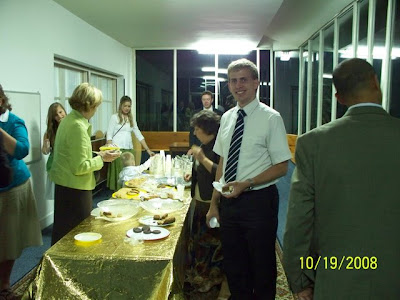 Andrew refueling in the sun room
Although she had one in her hand and her mouth was full, she was still rather interested in my blondie. I kept telling her that she had one and I had one and that fair was fair.

She put her head down to sulk for a little bit one time after I had told her no again. Suddenly, though, she perked back up. She had noticed the kids playing outside and wanted to show them to me. She kicked her legs, started making monkey noises, and pointed out the door behind me.

I turned around to acknowledge that she was showing me something.

The little trickster took this opportunity to steal my blondie! I could hardly believe it.

It amazes me, how smart she's getting. Sometimes I wonder how she thinks up the things she does.

She signs "potty" when she wants to get out of doing something she doesn't want to do. Like standing in line, or going to bed. Usually when it is time to go to bed she starts screaming and signing simultaneously. Tears will be streaming down her face while she wildly switches back and forth between "more" (for nursing) and "potty" in order to prolong bedtime.

Tonight, however, she started doing the actions to "Popcorn Popping." That's the first song on the current CD we play for her at bedtime and we usually go in and do the actions with her. Tonight instead of signing "more" or "potty" she signed "popcorn popping" and then closed her eyes tight.

I guess we kept her out a little too late hobnobbing with apostles.
Posted by Nancy at 4:55 PM