Every time we go to Ain Sokhna, the beach is completely different. This time when we arrived, the beach was littered with hundreds and hundreds of purple jellyfish. We were a little timid about getting in the water at first because of all the jellyfish, so Andrew and I left my mom with Rachel and wandered down the beach looking for a less infested area of beach to play at. There wasn’t really an area untouched by jellyfish, though, so we started back to find Rachel and Naanii and tell them that where we were was as good as anywhere. 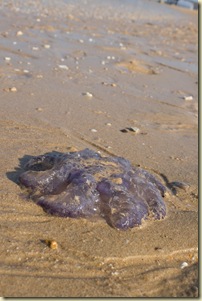 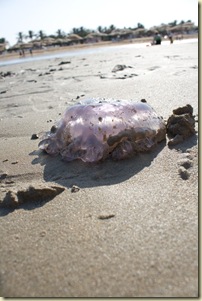 On the way we stopped by the dive center to ask about snorkeling. While we were there I also asked about the jellyfish. So, these little purple guys really, really are moon jellyfish and are completely harmless. I don’t know about the ones we saw before…because we didn’t ever get stung by them, either. Maybe that was just luck.

After enough goading from Andrew, I got brave enough to touch the jellyfish. First I poked it with my finger and when it didn’t sting me I got really brave and put my whole hand on it. Then I picked it up. They are the weirdest things ever. No digestive system, no brain, no central nervous system, no respiratory or circulatory system. They can’t even osmose, which kind of explains their odd consistency. 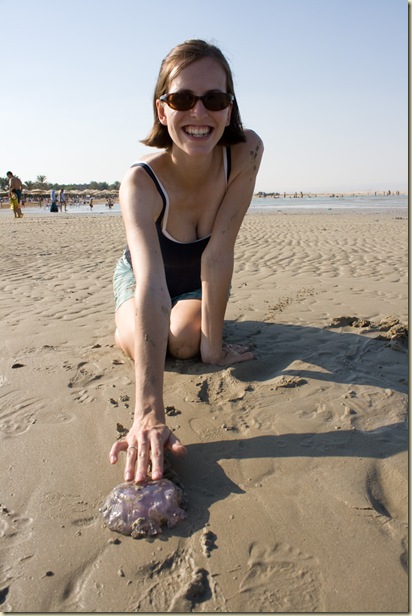 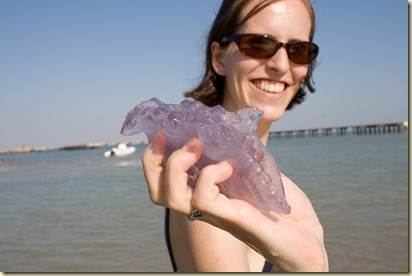 Even with my remarkable example of valor in picking up a jellyfish, Andrew didn’t get the guts to touch one until the next day when we went snorkeling…

Obviously we’re quite fascinated by jellyfish. They’re too weird not to be. Rachel didn’t find them quite as interesting. All she could think about was the water and she dragged Naanii right into the it chanting, “I wanna go beach! I wanna go beach!” 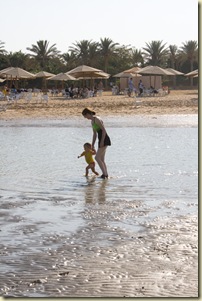 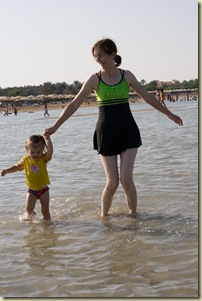 We were surprised she was being so brave because usually we have to coax her into the water slowly. Sure, she’s been talking about going to the beach with Naanii for about a month and was so excited when Naanii got here so that we could finally go (and was a little disappointed that we didn’t leave for the beach the minute Naanii got here), but we really didn’t expect her to actually initiate the getting-in-the-water part of our beach trip. She’s always been a sand baby, happy to sit on the beach but screaming her head off in the waves. Not today. 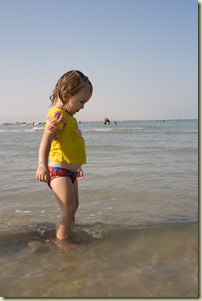 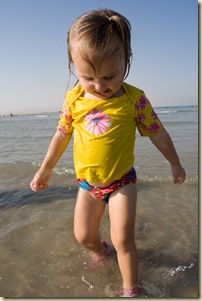 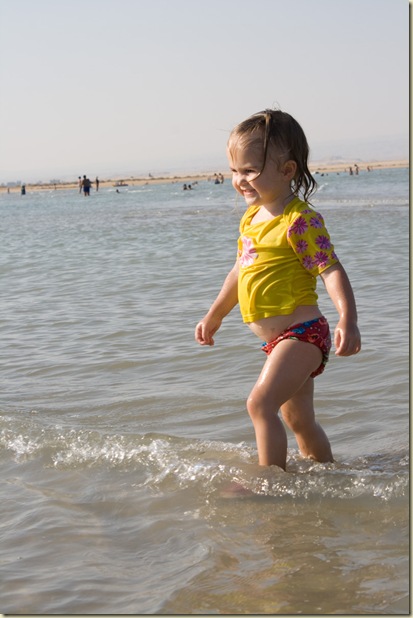 She was all about swimming this time around. We couldn’t keep her out of the water. She was putting her face in, blowing bubbles, jumping waves, riding around on Daddy and Naanii’s backs and stomachs, holding our hands and kicking her legs, laying down on her stomach and crawling around while the waves splashed in her face. She was so brave it was scary to watch. 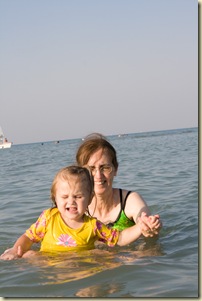 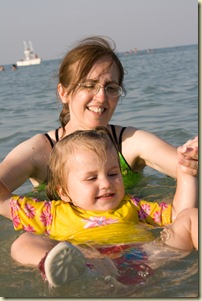 Rachel even got brave enough to touch a jellyfish, although she thought it was very gross. Every time one washed into her she’d scream, “Jellyfish getting me!” and make terrified shrieking sounds. It’s probably best that she remains wary of jellyfish since I really wouldn’t want her running up to grab one that actually stings. 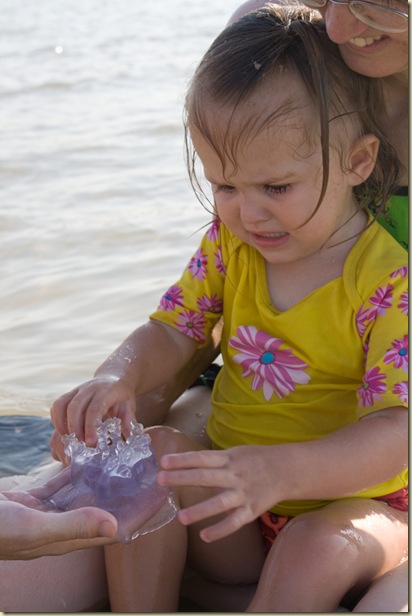 We stayed until sunset and were all exhausted when we got home. It was hard to believe that just that morning we had gotten up and gone to church, but we had. It seemed like a lifetime ago. Naanii got up and bore her testimony…and as she was walking back down, Rachel said, “Naanii said ‘amen.’”

Rachel was so loud and exhausting during church. She kept yelling out things that I would have preferred she had whispered, like:

It was nice to have Naanii there because now that there are so many nursery-aged children around, Rachel’s out of primary and back in nursery. Unfortunately, she isn’t transitioning back very well and always wants me to stay with her, but I have so much to do during primary that I can’t. Naanii stayed with her, and that was very helpful because then I could help worry about the 20 some-odd kids we have in primary now instead of helping Rachel feel comfortable in her new class. We’re rather understaffed at the moment, but it is fun to see the primary room so full again!