We just about wore ourselves into the ground yesterday. My mom agrees that the heat is simply oppressive. It was nice to have her with us, though, because she was slow like me…or maybe we’re not actually slow. Maybe Andrew’s just fast. I can never keep up with the boy, especially when I’m pregnant, and usually have to yell to him to slow down. But my mom is just my speed, so we got to take things a little slower.

After breakfast we hopped on the metro and rode out to Mar Girgis. From there we walked across the Nile to visit the Nilometer and Umm Kulthum museum, walking through some lovely back roads and showing Naanii a bit of authentic Cairo, complete with imploded buildings being used as garbage dumps, public water fountains made of clay jars, and having to make her jump out of the way of donkey carts laden with fresh fruit. 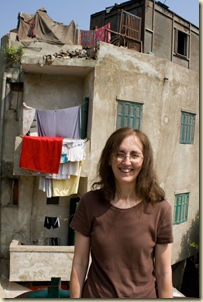 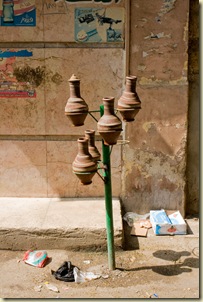 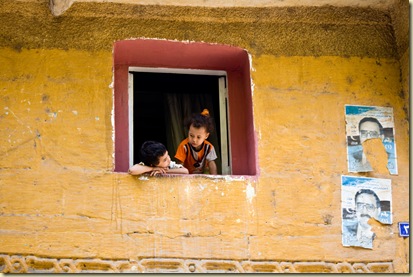 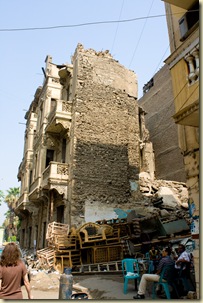 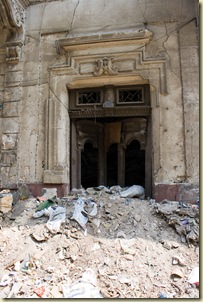 We stopped on the bridge when we were going over the Nile, just because we always do. I don’t think we’ve ever walked the whole way across without stopping at least for a second. The Nile is so big and so beautiful that you just can’t help it. Andrew looked down and saw a dam of water bottles, which made us all a little sad. As my mom said, the Nile was a sacred river for so long; it’s hard to see it be treated so poorly. 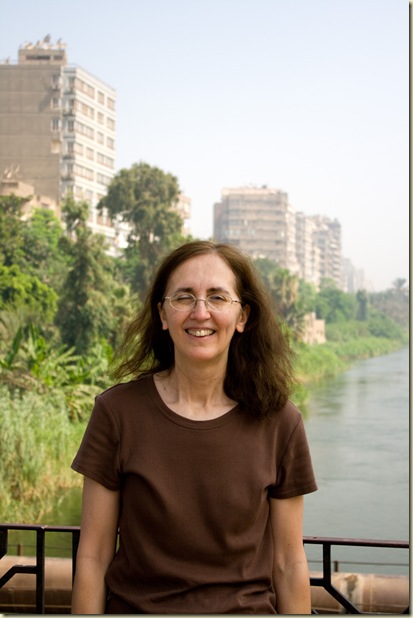 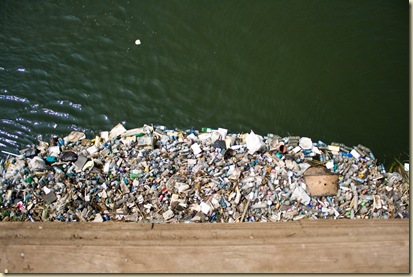 When we got to the Nilometer, Andrew bribed the guard to let him walk down to the bottom. He was the only one brave enough to do it. Rachel was quite concerned about him and asked,

“What’s my daddy doing up there?”

“Your daddy is down there, and he’s taking pictures of us,” I told her. 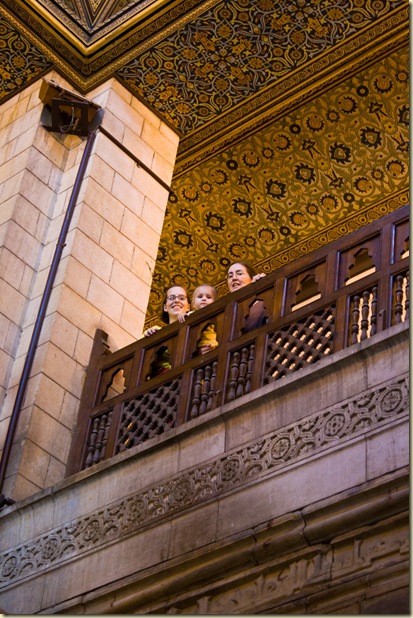 The stairs are ancient and worn and slippery. Andrew asked me to drop our tripod down to him so that he could balance the camera better, but I told him no way. I thought about walking down the stairs to meet him halfway, but then I looked at the first set of stairs; they were so uneven and so worn down they were shining. Marble gets very slippery and I just didn’t trust my pregnancy balance to take me down those stairs. 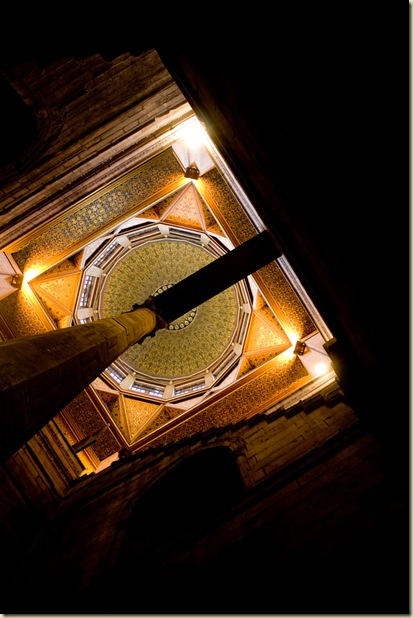 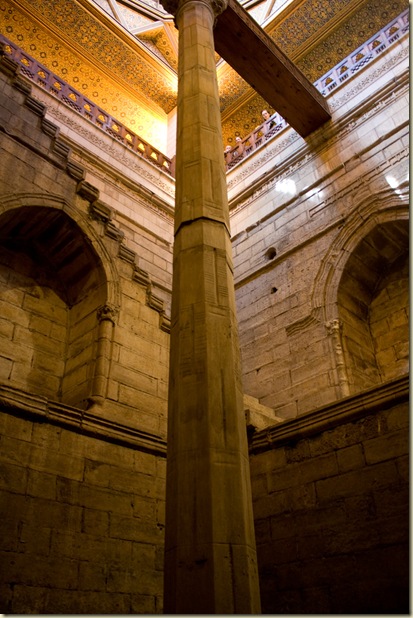 The guard ended up taking it down halfway to him and then he spent a long time arranging shots and taking pictures. He said it was nice and cool down at the bottom of the Nilometer. We, on the other hand, were sweltering at the top and were very happy when he made it back up so that we could go to the Umm Kulthum museum and cool off in their lovely air conditioning! 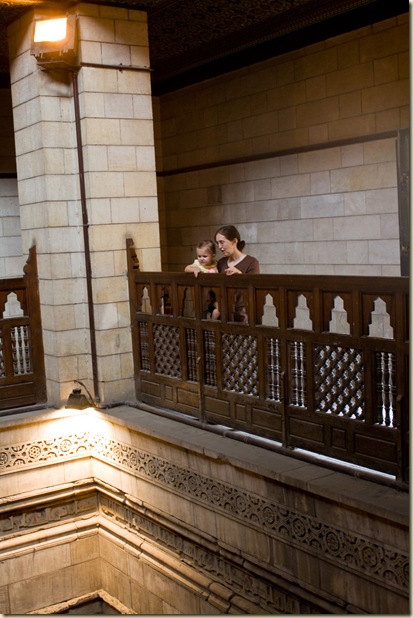 My mom teaches a world music course at UVU, so she knows quite a lot about Umm Kulthum—more than we knew, anyway. She was excited to see the museum since she’d only seen it in a video. 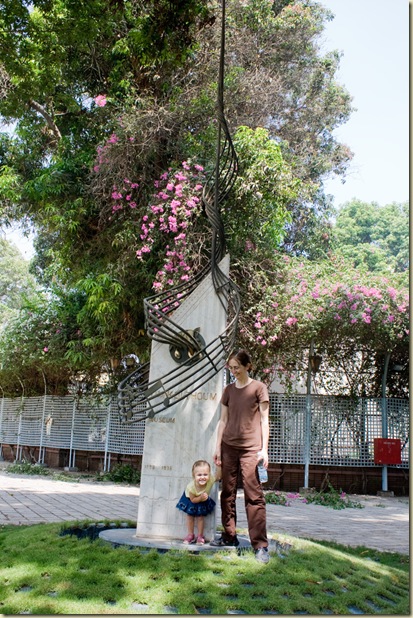 The museum costs 2 LE per person. We didn’t pay the last time we went because not a soul was around to tell us how the museum worked. It was open, though, so we went in. This time we stopped at the desk to buy tickets. Unfortunately our only options were either 4.25 in change or a big 50 LE bill. 4.25 obviously isn’t enough, but the man at the desk said he didn’t have change.

“We don’t have change. This is all the change we have.” Andrew explained.

They went through this several times in both Arabic and English. Finally the man said that he’d take the 50 LE and we could enjoy the museum. We stopped by to get our change when we were finished. The man hadn’t even tried to find change. He told Andrew he’d just keep the 50 LE since we didn’t have change.

It was a big kafuffle. We ended up just leaving all our change with him and taking back our 50. We’ll have to pay extra the next time we go. Usually people are really good about finding change; not this time. Oh, well. We left him grumbling and enjoyed the surrounding gardens. Rachel found a litter of kittens that she thought were just so cute! And really they were. They looked clean and healthy, unlike the mangy cats she’s used to seeing around town.

When we were finished there we walked back to the Mar Girgis metro station to visit Coptic Cairo. We wandered around the graveyard and took my mom to several churches, including one that claims to have a little cave where the Holy Family hid to escape King Herod’s infanticide. 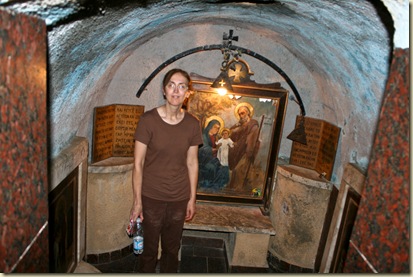 We also took her to the Ben Ezra synagogue, one of few synagogues left in Cairo, which was built on the site where the baby Moses was found in the Nile River, or so the legend goes.

To get into the synagogue you have to pass through a metal detector. For some reason, Egyptian guards don’t like to let babies or pregnant ladies through metal detectors. They had Rachel walk around the metal detector but I walked right on through and got yelled at for it. We just laughed it off and right before my mom came by, Andrew told the guard,

He thought that was funny. I don’t know why they are so worried about it. It’s not like the magnetic force is going to pull the baby out of my womb and I don’t think I’d get away with skipping security in an airport simply because I’m pregnant.

Our last stop of the day was the ‘Amr Ibn al-As mosque. We just think it’s neat to go to Christian, Jewish, and Muslim places of worship all in one day…

We got there right during prayer and I really wasn’t sure if they would let us in, but they invited us in right away. Mom and I had to go in through the women’s entrance, though, because the men were praying, and we had to put on the ugly green robes again. A group of women who had just finished praying walked past us and a few of them whose outfits had been deemed too immodest had to stop to return the green robes they had had to borrow. 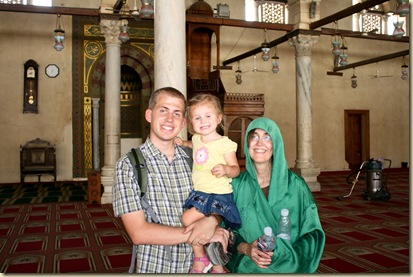 I don’t know why, but it made me feel better that they don’t only force Christians to put on the stinky old things. They also make girls who bend the standard of modesty wear them, even if the girls are muhajjabat.

When we got home we all fell asleep for a long afternoon nap, except for Andrew, who somehow managed to keep on going all day long. I don’t know how he does it!