When we got back from the beach on Saturday evening we walked into the backyard to desandify ourselves in the grass and were pleasantly surprised by the sprinklers coming on. 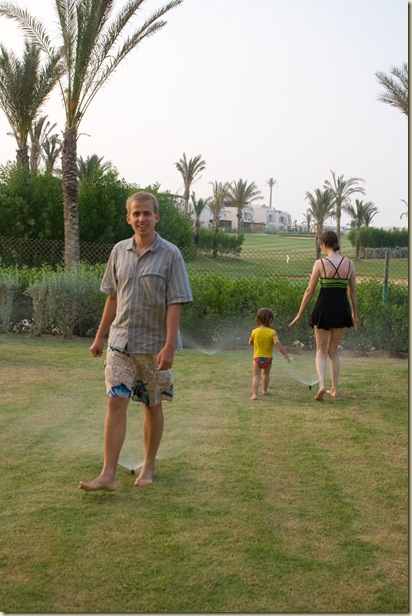 Rachel hasn’t seen sprinklers for such a long time (about a year) and wasn’t really sure what to think. We all started running around in the sprinklers and Rachel was right there with us, laughing and asking,

After asking that for a while she’d stop and do something new, like putting her head in the water or spinning in circles or attempting summersaults or practicing karate kicks, and then she’d start asking again like the little broken record she is.

It was so much fun to watch her play! She was so thrilled and genuinely curious about what was going on. If she knew what rain was, I’m sure she would have thought it was raining upside down. She couldn’t have thought that, though, because she hasn’t ever really experienced rain, either. Sprinklers were just another novelty. 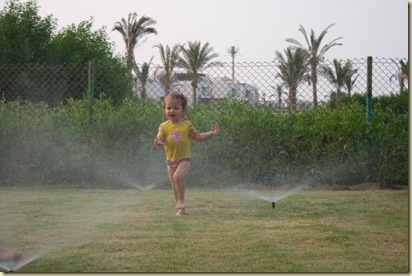 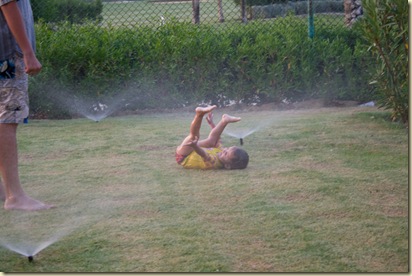 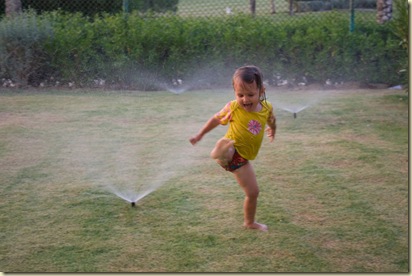 She was such a hoot all weekend! I should have followed her around with a tape recorder so that we didn’t miss anything she said.

We took the “tram” to the beach a lot. The resort has two open-air buses that have no windows or doors, but instead have a railing to keep passengers inside. There are park benches secured to the floor of the bus and they really aren’t the most comfortable thing to ride on since we have to go over speed bumps every few minutes.

I used to wonder why the pioneer children walked and walked and walked instead of riding in the carriage. I think I understand why now because sitting on a rickety wooden bench for a long, bumpy ride really isn’t a whole lot of fun.

When we got off the bus one time, Rachel waved at the driver and yelled out a friendly, “Shukran!” And then she added, “Means thank you! In Arabic! For riding bus beach!”

Later we had a discussion about where we live. We’re trying to get her to say Egypt, but she just can’t or won’t. She’s always willing to share her little gems of wisdom, though.

“Where are you from, Rachel?”

“Where do you live?”

“You live at home, yes. Our home is in Egypt. Can you say Egypt?”

At least she tried to say Egypt. Some things she won’t even attempt.

“Do you want a banana?” I asked her. “Banana is mooz in Arabic. If you want one you say, ‘Mumkin mooz,’ or ‘Mooz minfudlik.’ After I give you one is when you say shukran. Can you say mumkin?”

Clearly my Arabic is a little primitive and I shouldn’t be the one teaching her the language. Oh, well. They’re letting me raise her and I’m not sure how I qualified for that position, either.

Oh, it was so funny! She said it perfectly.

When we were having our second breakfast with Naanii and Daddy, she shared some more Arabic that she had learned earlier that morning.

I asked her what she was talking about.

She was mishish-ing and ishish-ing the whole day long! We had been talking about flavors of yogurt before everyone else got up. Andrew told me that we had purchased apricot yogurt but the kind Rachel and I had was definitely peach, so I taught her that word, too—khoukh, which really is too hard to say. We all had fun laughing about Rachel trying to say apricot in Arabic and how if the yogurt wasn’t apricot flavored than it was mish mishmish flavor, since mish means not in Arabic. We really did have apricot yogurt in the fridge, too, but Rachel and I hadn’t seen it.

Rachel had a bit of a hard potty day on Saturday; just having too much fun to think about getting to a potty, I guess. She peed while we were playing on the sandbar, while running up to me and saying,

It wasn’t that big of a deal. Andrew just ran her into the sea to rinse her off and let her finish her business. When we were at the condo having lunch, though, it was a bit more of a problem, though not a huge one.

In the middle of lunch, Rachel started whimpering and looking really nervous.

“Well, stop!” I instructed her and, again, Daddy rushed her away to find a better place to relieve herself. This time it was the toilet. Daddy gets to do a lot of the rushing since my rushing is a little less rushful as of late.

While they were in the bathroom, Rachel told Andrew,

“My bum is soooo bad! My bum went potty in my seat!”

It’s a little difficult to play the blame game when you’re they only child, but Rachel seems to do an okay job of it.

She really did a full-on peeing on the chair when Naanii was watching her that afternoon. Luckily the chairs are made of woven plastic fibers (they remind me of sitting in a wicker basket) and the floor under the chairs is tile, so clean up was simple.

While spending time alone with Naanii, she also started nursing her baby doll. Mom said that she sat down, held baby doll in just the right way, and covered herself up with a blanket while she nursed. I happen to think this is hilarious because the last baby Rachel saw nursing was herself, pretty much. And she didn’t ever watch herself nurse because she was too busy nursing. Apparently she remembered our technique well enough to mimic it, though.

She also tried to nurse her baby doll with her belly button, which is not a technique we ever tried.

When we came home from snorkeling, Rachel tried to quote Naanii to us. She’s all about quoting people and movies, but this time was a little different because she was quoting a gesture.

“Naanii said,” Rachel said, before tilting her head to one side.

“What did Naanii say?” I asked her.

Dramatic head tilt. Rachel was obviously losing patience. “Naanii said…” she said slowly, drawing out the said in an annoyed fashion before stopping talking and finishing off with a flourished head tilt.

It took us a few minutes to understand that the *quote, unquote* quote was actually the head tilt she kept doing.