Signing up to go snorkeling was pretty nerve-wracking for both of us. We’ve been wanting to go for quite some time since the Red Sea boasts some of the best snorkeling/scuba diving destinations in the world…and here we are in Egypt, just an hour and a half away from the Red Sea.

This weekend we found ourselves up at Ain Sokhna, with a babysitter no less! We decided to drop by the dive center to ask about things and the next thing we knew we were running off to find my mom so that we could ask her if she wouldn’t mind watching Rachel for a few hours the next day while we went out to the reef. She said she would, so we went ahead and signed up for the trip.

And then we started to get nervous.

I’ve always had a lot of reservations about the open sea. Sharks, for one thing; then there’s the whole Gilligan’s Island scenario; and jellyfish and stingrays and waves…among other things like knowing that I’m too far away from shore to swim back without dying of exhaustion first.

That night I had a dream that my stomach had been filled with seawater and tropical fish. I could feel the fish moving around and everything; it was the oddest sensation. I woke up thinking what a strange dream that was, then realized that my stomach was still moving and I kind of freaked out.

And then I remembered that I’m pregnant.

We spent the morning at the beach, wearing Rachel out so that she and Naanii could go back to the condo for a nice afternoon nap while Andrew and I went on our snorkeling trip.

Andrew was so jittery while we were waiting at the dive center. I don’t know if I was visibly nervous since I can’t see myself, but Andrew was obviously edgy. He couldn’t even remember his shoe size when it came time to pick out our flippers and mask.

Granted, they wanted to know his European shoe size, but still. I couldn’t remember his shoe size, either. I used to know what size of shoes he wore, both in European and North American sizes, but I have too much to remember to keep that information near and dear to my heart. I figure he’s a big boy and can keep track of his own feet, which don’t grow, while I try to remember what size of shoes Rachel needs. We’re constantly moving her shoes into the “it fat* yesterday” pile and it’s all I can do to keep up with her.

He wears a 40-42, we found out. At least in flipper size. I’m not sure how well that translates into shoe size, but when I asked for my size (36-38) the flippers fit perfectly, so apparently it’s pretty accurate.

After we tried on our equipment, we sat and dithered a while longer while the two other couples who had booked the same trip as us backed out. We ended up getting the whole boat to ourselves, besides the captain and our guide.

We took a little dingy from the shore out to a larger boat. I almost laughed when they told us to climb from the dingy over the railing of the big ship to get on deck, but I heaved my huge belly on board, anyway, and then we sped off away from the mainland, watching somewhat torpidly as the people, trees, and beach umbrellas faded off into the distance. As if that wasn’t enough to shake up these two mainlanders, the water had the gall to turn a brilliant, beautiful blue, proving to us how deep it was.

It was so beautiful that by the time we reached the reef, we were pretty excited to jump in. We put on our flippers and mask and practiced breathing for a minute before taking the plunge. Breathing in was easy enough, as long as you remembered to always breathe through your mouth. Breathing out was a little more difficult since you have to exhale and clear any water out of the snorkel so you end up breathing out in short, powerful blasts. I felt like a whale the whole time, spouting out a column of water and air every time a wave washed over me.

I was a little embarrassed that they threw the life ring to me to carry around while we swam since I’m a pretty strong swimmer, but I was glad to have it in the end. I guess they were worried about me because I was pregnant, and pregnancy really does take a toll on one’s endurance. I got tired of battling waves pretty fast and my feet kept cramping up from having to be pointed for so long. When I had had enough, the guide half-towed me back to the boat because I wasn’t swimming fast enough for him and then offered me a bed in the cabin, which I didn’t take.

Aside from pregnancy complaints, though, it was an amazing experience. Kind of surreal, like how I imagine going to the moon would be—a completely foreign view of our world.

The fish were looking at us all curiously and we were looking back at them with the same look of awe, I’m sure. We felt like we were thrown into Finding Nemo. We saw clownfish (anemonefish), angelfish, and even some blue tang (which are also known as dory fish, making Dory’s name on Finding Nemo rather ironic since no one ever seems to know what kind of fish Dory is. She’s a dory). We also saw some carpet fish, several kinds of butterfly fish (including lined, chevron, bannerfish and raccoon), Forster's hawkfish, Emporer’s angelfish, and Arabian surgeonfish.

The coral reef, itself, was an amazing conglomeration of color and shape with varying kinds of urchins and anemones nestled in crevices of the brain and branching fire coral. The vibrant and flashy fish were darting in and out of the coral and anemones. The big, ugly fish were slowly swimming on the ocean floor. It was amazing. We even got brave enough to dive below the surface to get a closer look at things.

We swam through schools of small silvery fish and swarms of moon jellyfish. The fish avoided us, but the jellyfish are at the mercy of the current and could do nothing to avoid hitting us. They’re much more solid than they look and feel more like silicon than jelly. The small ones are barely noticeable when they bump up against you, but the big ones get quite heavy and crash into you with considerable force. Not enough to hurt, really, but enough to surprise you with how heavy and solid they are.

They’re completely benign—we were poking them back and forth at each other in the water and on shore people pick them up and throw them at each other like balls—but it was still so strange to swim through a whole swarm of them. We are so conditioned to fear jellyfish, and while there were a few “dangerous” jellyfish lurking about they never got close enough to be alarming.

I don’t think we would ever have wanted to leave if we both didn’t get headaches from breathing funny and tired from fighting against the sea. Poor Andrew also got completely fried. For some reason he decided to take off his “beach shirt” but I didn’t put sunscreen on his back before we left because he was wearing his “beach shirt.” Andrew doesn’t touch sunscreen, see, so I basically have to tackle him just to smear sunscreen on his face.

We were out swimming by the coral reef for over two hours, belly down the whole time. From the back, Andrew looks like a lobster, but he’s still smiling. 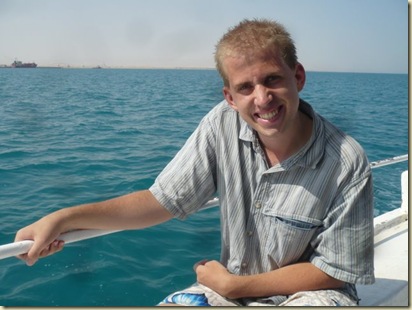 Now we’re tempted to get scuba certified…. We had so much fun on our little snorkeling adventure, we couldn’t help but think of what else we could do and see with some more training and practice…and equipment. Obviously this will have to wait until I’m not pregnant and we have more money to spend on things like this…

*Otherwise translated as “too small.” Once Andrew accidentally used “fat” as the past tense of “fit” and we’ve been saying it ever since. Especially in the context of “it fat yesterday.” I believe those were his exact words when he made that error. It’s been years, but we don’t let these things slide by in our family. Because we think they’re hilarious.