Tabouleh and the metro

There's been a transportation strike going on for the last two days, not that we've noticed since we don't use public transportation all that often. Besides Andrew's daily bus rides into campus the most common mode of transportation we use is our own feet.

In honour of not being at risk of being squashed by buses limping down the street at insane speeds, being so laden with people that they lean 30 degrees to one side or another, losing non-essential parts and puffing out black exhaust as they lug their decrepit bodies along....I thought I'd share some metro stories that haven't been shared.

Way back in April, we went out to dinner with the Schillings and the Masons at Tabouleh's for a farewell fling of sorts shortly before the Schillings headed back to the States. 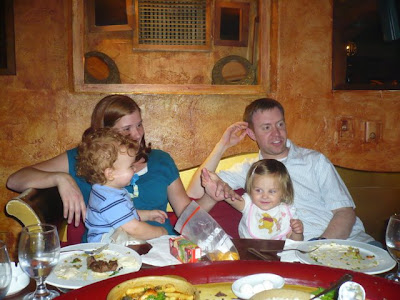 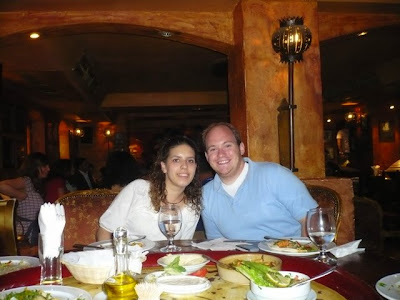 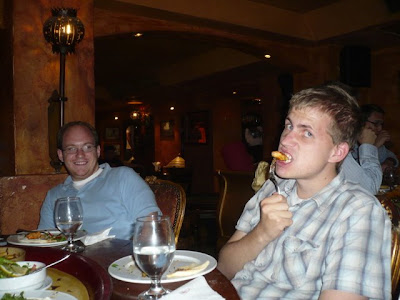 At the end of the night we walked to the metro station and ran into a grumpy policeman. He asked us where we were from, what we were doing, and where we were going. We answered all our questions and bought our tickets, thinking we were finished with him. We walked through the turnstiles. He followed us.

We waited on the platform and tried to act like we didn't know there was a grumpy policeman following us. We laughed and joked with each other, but most of our conversation centered around the policeman, who was eyeing us suspiciously.

We got on the metro. So did the policeman. We tried to ignore him, but it was obvious we were his "assignment" at the moment. Whether this was a self-imposed assignment or imposed upon him by the higher powers that be remains a mystery. Andrew tried making small talk with him on the metro, but he simply grunted and shrugged off any questions.

We got off the metro and were followed by the policeman, once more.

We thought for sure he would leave us at the exit, but he followed us out onto the street where we said our goodbyes to the Schillings. He stood there in front of the metro station and watched us until we were out of sight. We know, because we looked back to check before we rounded the corner and he was still standing there, glaring at us.

I am familiar with the feeling of being watched. There's a professional people-watcher at the McDonald's. (At least, that's what we think she is. We don't really know. She just stands there in uniform and watches people all day without ever lifting a finger so we're pretty sure she is paid to watch people eat their food.) People stare at me on the street and in stores and on the metro. I'm Caucasian and I stand out; people stare and I'm used to that.

Having a policeman's eyes bore holes into the back of my head with his eyes, though? I'm not so used to that. It made me feel uncomfortable and I was rather agitated for the rest of the evening...but I survived and it hasn't happened since, although the second time we went to Tabouleh's something weird happened on the metro again. Perhaps the restaurant is a bad omen.

We were on our way to meet my cousin JC for dinner, riding the metro again. Most of the metro in Cairo is above ground, but downtown, the metro dips underground for about 5 stops. The lights flicked on shortly after departing the last above-ground station, but long before we actually went underground, which is completely normal. But just as we zipped underground the lights went out and we were plunged into darkness. We were surrounded with nothing but pitch blackness. Rachel, who was sitting on my lap, wrapped her arms tightly around me and whimpered.

I didn't blame her. The idea of hurtling along in the dark, through the dark is a little unsettling.

Soon, though, the lights flicked back on and everyone breathed a sigh of relief. I was glad to see that we weren't the only ones nervous about being in the dark for so long; the locals looked just as grateful to have the lights back on as we did.

I kind of want to go to Tabouleh's a third time, just to see what will happen on the metro...
Posted by Nancy at 1:22 PM

Email ThisBlogThis!Share to TwitterShare to FacebookShare to Pinterest
Labels: Cairo