Cairo to Taba to Eilat

We woke up bright and early on Tuesday morning to catch our 6:00 AM bus to Taba. Andrew updated his Twitter status to complain about how early we had to get up. Not long after, several of his Egyptian friends responded saying that the night was still young—they were still up celebrating Ramadan, right until the first call of the prayer of the day, which happens to be at 4:15 AM.

Our bus left right on time and, gratefully, was rather empty so we were able to spread out a little bit. Rachel sat beside me for a while and I tried to get her to go to sleep, but I failed. She decided to go up and sit with Andrew and was asleep in his lap within five minutes. She was Daddy’s Girl for the rest of the day, which was nice because it meant that I got some much needed sleep.

The moral of this story is:

The bus ride is about six hours long and we had one actual pit-stop. The bathrooms were too disgusting for Rachel’s taste and so she refused to go, which meant that she had to hold it until we got to Taba. She did it, but I’m pretty sure she was in agony.

We stopped several other times along the way, of course, at checkpoints. I’m pretty sure the police out in the middle of the desert are bored out of their minds and like to pull buses over just to have something to do every once in a while.

They asked for our passports once or twice and questioned us about our nationality and why we were in Egypt and where we were going. Our answers were always the same: American, study, Taba.

It isn’t wise to admit to be traveling to Israel, even though Israel and Egypt are technically at peace they seem to officially unofficially not be. They guard their deserts quite seriously on either side of the border and there is not a whole lot out there to guard. Trust me.

Saying you’re going to Taba is code for saying that you’re going to Israel and everyone knows it, but since you didn’t say it out loud it’s like it isn’t really happening. Or something.

The only other foreigner on our bus was reading a Jerusalem guidebook the whole bus ride. He also answered that he was going to Taba. Clearly he wasn’t.

We got dropped off at Taba, though, since that was the end-destination printed on our bus tickets, and walked from the bus station to the border carrying all our luggage. This wouldn’t have been too bad except that children complicate things. There was once a time when Andrew and I could pack for a ten day trip in one carry-on size suitcase. Now? It would be impossible. What with the books and coloring supplies and favorite blankets and the whole kitchen sink that we have to pack to satiate Rachel’s needs, it was the longest 600 meters of my life.

And once we got to the border, things were…complicated. I’ll let Andrew write about that since he did most of the talking. I mostly tugged Rachel around, looking for places to sit down. I tried to be helpful, but all I really did was sit down, fill out forms, and watch the luggage/Rachel while Andrew shepherded Patrick and Joseph around trying to get them a multiple entry extension on their visas.

That took a while. And then we had to avoid getting exit stamps in our passports.

I don’t even know how long we took just leaving Egypt; we still had to get into Israel, which was tricky. Things would have worked out relatively smoothly, I think, except that Andrew packed a Qur’an in his backpack.

We ended up getting detained while Andrew was cross-examined by a curt and unfriendly female guard. Most of the guards are female. Not all of them are curt and unfriendly. I think he’s planning on expounding upon the details of his interrogation. It was pretty awful, and all over a book. I hate to imagine what happens to anyone caught with anything that’s actually illegal…

At least we made it through alright in the end.

And the moral of this story is:

The passport-stamper-lady accidentally stamped Rachel’s passport, but it was completely accidental and she was very apologetic about it. So far mine and Andrew’s passports have no evidence of our trip, and we hope to keep it that way. Who knows where we’ll end up studying down the road; I’d much prefer to not shell out money for a new passport in case we end up needing to go to Syria or something.

Our first impressions of Israel were not very positive in light of our border experience. There were some things we noticed, and enjoyed, right away—like the drinking fountain just after passport control, and sidewalks, and garbage cans, and traffic laws, and a few things like that. Mostly, though, we were all pretty grumpy and noticed negative things—like how clothes seemed to be optional, and the electrical sockets were funny, and how Israel has an odd fascination with barbed wire, and how taxi drivers are prone to rip you off.

We got to our hostel, walked into our room, dropped our luggage to the floor, and collapsed on the spot. Andrew flicked on the television and found a children’s station (Rachel seemed to be the only one with any energy; isn’t that always how it goes?) that was playing Dora the Explorer. She was immediately captivated, as were we all.

It’s amazing what some good ol’ television will do to a child. Rachel was bouncing around, fiddling with this and that, showing us how to wear a hijab, and being over-hyper. Dora came on and she stopped jumping around, which was wonderful. 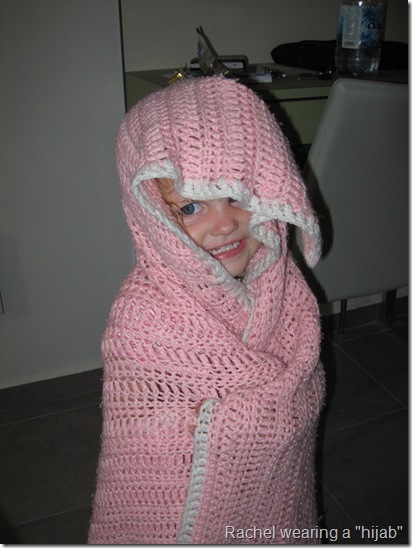 This Dora show was in Hebrew and English; we suddenly felt very sympathetic for Spanish viewers of the English-Spanish Dora shows. Wow. The English they were teaching was lame-o and when Dora spoke English she spoke with an absurdly foreign accent.

We sat there mesmerized until the show ended and Andrew thought to turn off the TV.

“We’re going to the beach!” he announced.

So off we trudged, out of our hotel room, past the bomb shelter, down several sets of stairs, and to the beach. 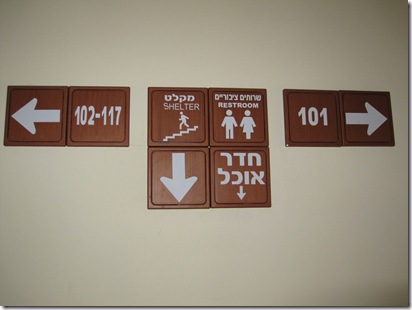 Eilat is really quite small so it was basically across the street. We played there for a while, but mostly we were too worn out to really enjoy ourselves. I got all the way in, even though the water was much colder than I would have preferred. Andrew and Rachel played around for a while until Rachel decided she wanted me. And then Rachel and I played around in the water or a while. Patrick, on the other hand, plopped down in a beach chair and let it come to him.

Lucky for him the tide was coming in, otherwise he might never have touched the Red Sea.

The beach wasn’t great, but it was free (unlike Aqaba’s beaches) and provided chairs and umbrellas so I guess we can’t complain too much. You’d think with the beach being free and all that people could afford to wear clothes, but they can’t. I saw more skin in the hour we were at the beach than I’ve seen in the last year, probably. It was quite shocking. 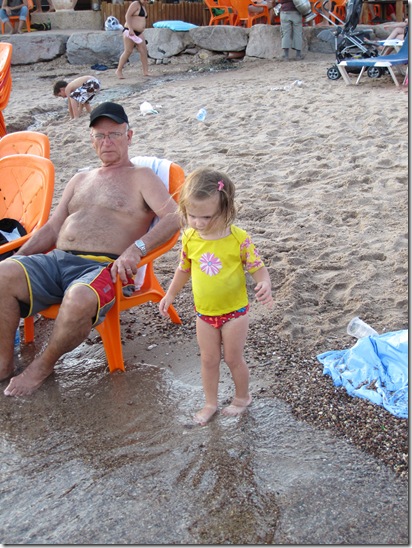 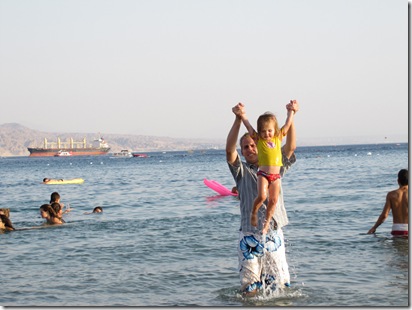 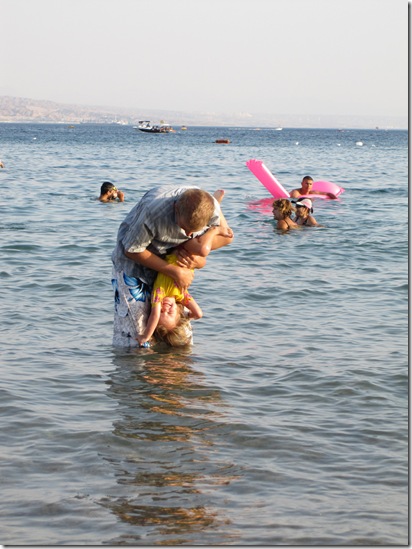 It didn’t take us long to decide that we were all tired out, so we decided to call it day and find something to eat. 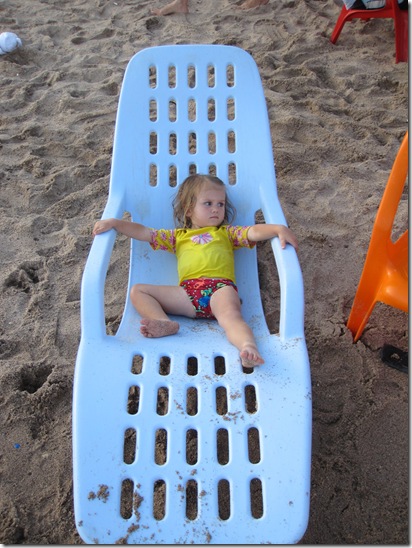 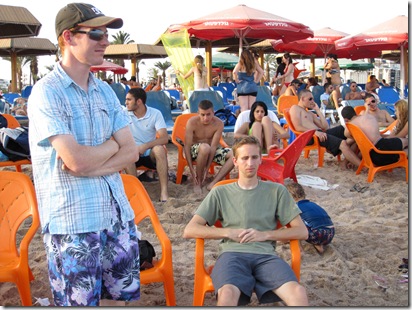 We ended up eating at a falafel place that was amazing. Truly. I haven’t had such wonderful falafel and shwerma in such a long time! Egyptian ta’amiya isn’t what I would describe as “great;” I’ve missed authentic Levantine food. Dinner was good. So was sleeping. We were all in bed before 10 PM. We were wiped out.

We still are. We’ve been going non-stop!

(I’m only slightly jealous that Andrew got to go back to Jordan and I didn’t. He keeps telling me about how wonderful it was and how different it is from Egypt and how familiar everything felt. It was our first Middle Eastern home. Still, I’m like 31 weeks pregnant. I barely survived walking around the Old City—we’re in Jerusalem now—today. Petra would have killed me, I’m sure. Maybe next time.) 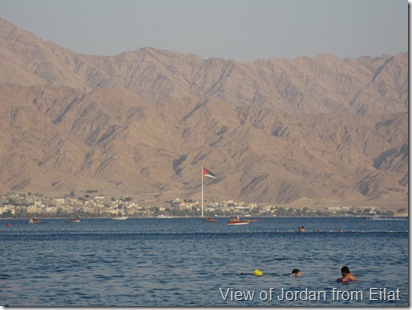