Yesterday the power went out several times. We spent the day lighting candles and playing with the flashlight, which Rachel calls the "shadow light." It seemed to just come off and on all day, which was rather frustrating. It stayed on long enough for me to arrange a ride from the airport for my mom. As soon as I was finished emailing her the details, the power went out. It stayed on long enough for us to talk to our families. As soon as we hung up from talking with my dad, it went out again.

We had a few power surges, which scared the living daylights out of me. Rachel and I were sitting down, coloring together, and holding the shadow-light (even though we had sunlight streaming through our window--Rachel was very concerned about the power going out and couldn't survive not touching the flashlight) when all of a sudden there was a flash of light by Andrew's computer desk, accompanied by a hissing sound.

A few minutes later it happened again with the light fixture in the living room.

Rachel and I ran into her bedroom and hunkered down there until the power came back on. Upon further reflection we should have run into the guest bedroom since that is actually the room with the fewest electrical outlets...not that any of our rooms have many of those.

It was also a very bad example for me to freak out so badly about the power surges when I had been telling her that there's nothing to be afraid of when the power goes out. But Andrew was on campus doing research and it was scary...

Later, when Andrew got home we had a candlelit dinner, out of necessity not for a romantic atmosphere, which was kind of fun. Rachel insisted that we sing Happy Birthday before we ate dinner--because you can't light a candle without singing Happy Birthday, right? 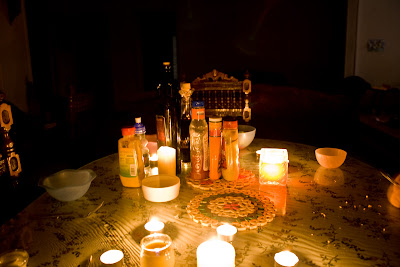 We also had Rachel chasing the light from the flashlight around on the walls.

It was nice to enjoy the deafening silence of the power outage. Most of the air conditioners here are window boxes--there is no central air--so they are noisy and clunky (and I'm sure they are what cause the many power failures we have in the summer since they use up so much energy). When they all turn off at once, though, the silence is quite noticeable.

By the end of the power outage Rachel was convinced that they were really pretty fun and only a little bit scary. She's the only two-year-old I know of, though, who exclaims, "Oh, man! Power went off!" when she hears all the electrical appliances shutting down.

She's also the only two-year-old I know who answers the question, "Where are you from?" with "Amrika!"

By the way, we already had two power outages this morning...but the power has been on continuously since 9:00, so maybe it will stay on all day!
Posted by Nancy at 6:19 AM