Before my mom left South Africa, I sent her an email detailing how to get through the airport and explaining how the taxi company would meet her and bring her to our apartment.

She was nervous to come here by herself, of course, and the taxi company assured me that they would take care of her. I had every reason to believe they would because we’ve used them before without any problem. They picked David up when he came to visit us and the picked Rachel and I up from the airport when we came home from Greece.

But then this morning, my mom called. No one was there to pick her up. I panicked.

Andrew called the cab company and they called their driver, who didn’t answer his phone. Instead a police officer answered it. Our driver had been arbitrarily arrested at the airport and was being detained. No reason for his arrest was offered, which means there probably wasn’t one. He wasn’t allowed to call his supervisor to explain that he wouldn’t be there to pick up my mom, so they weren’t able to send alternate transportation.

Luckily (or not) my mom found a cab driver who let her use his phone to call Andrew, so we just had him drive my mom here. He ripped us off *grumble, grumble* but at least she got here!

She was pretty shaken up when she arrived. Not only had she been travelling for a long time and been stranded at a strange, foreign, and quite scary-looking airport (she came in at the old terminal; it’s scary, trust me), then she had to endure a car ride on the ring road in broad daylight. That’s enough to send anybody packing.

Rachel was excited to see her though, and spent a good portion of the afternoon curled up on Naanii’s lap. Poor Rachel was exhausted. Having Naanii come was literally like waiting for Santa Claus. Rachel couldn’t fall asleep last night and woke up this morning at the crack of dawn wondering if Naanii was here yet. Too much excitement.

We put her down for a nap and I had a good chat with my mom all to myself, which was nice. This is the very longest I’ve ever gone in my whole life without seeing my mommy! I’ve missed her so much!

After Rachel woke up we had a quick dinner and then headed out to enjoy the sunset on the Nile. Dad was worried that Mom wouldn’t want to take a boat out on the Nile, but she braved it (even though she just about choked when I said there weren’t any lifejackets). 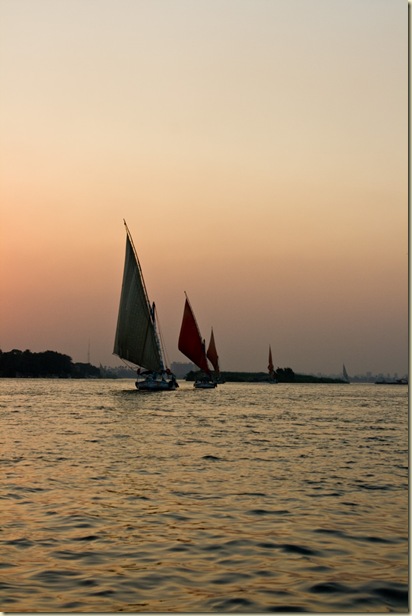 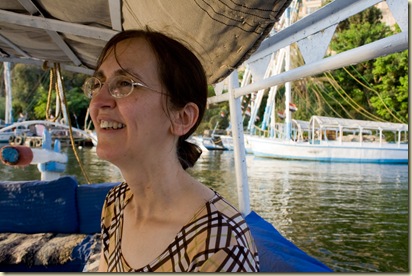 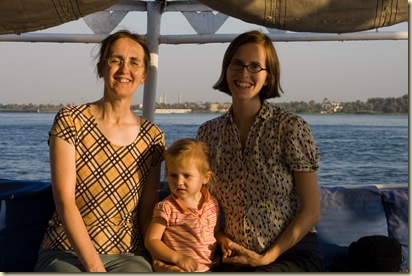 Our ride was perfectly uncomplicated and Mom quickly relaxed. It was a pretty windy day, so even with our sail half-furled we were going pretty fast. Not too fast, but fast enough to be enjoyable, even though our captain was letting us drift lazily along. Feluccas are huge and are easy to trust; Mom even got up the courage to climb on top of the boat by the mast. 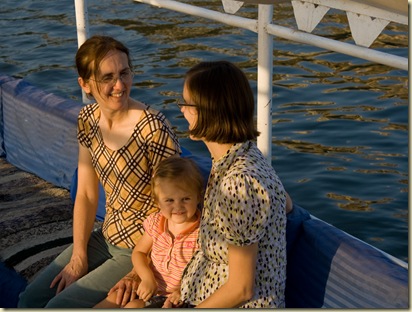 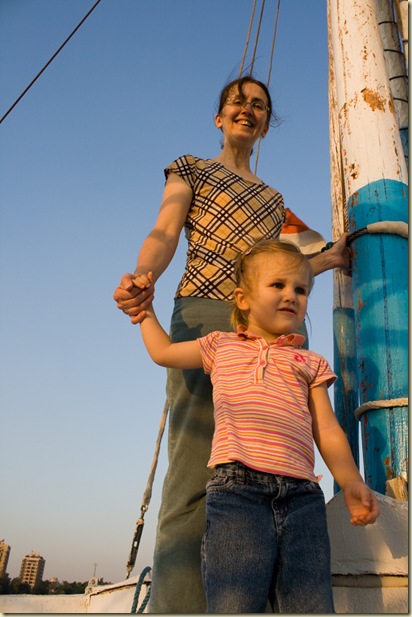 Once Naanii got up there, Rachel had to as well, and then she kept bossing everyone to help her climb up and down the stairs and jump into the seating area. She’s pretty brave on boats, which tends to make everyone terrified. She’s also scared stiff of falling into the “Nile Ribo” so she takes enough precautions that she feels safe. Her idea of precaution just don’t match everyone else’s idea of safety measures. 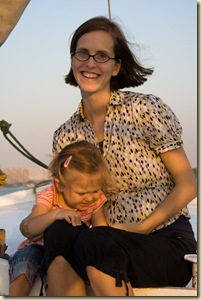 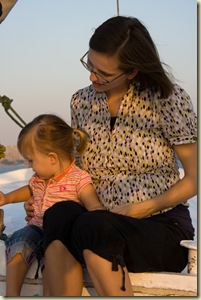 I think Naanii was most nervous when Rachel was with Daddy. His idea of precaution doesn’t exactly match everyone else’s, either. 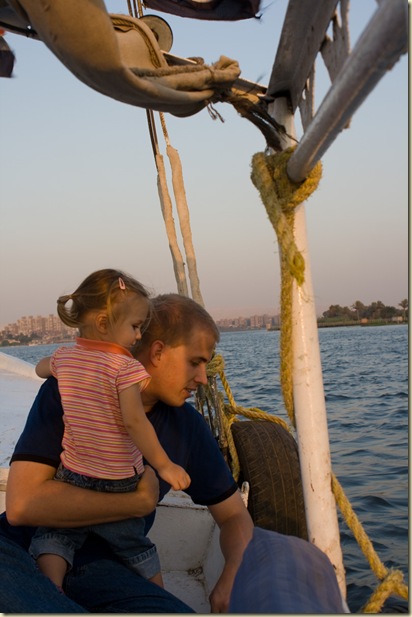 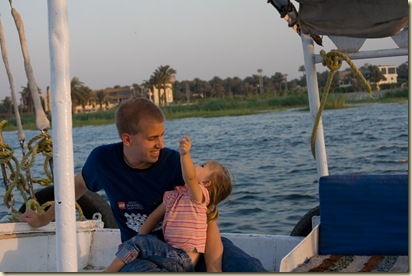 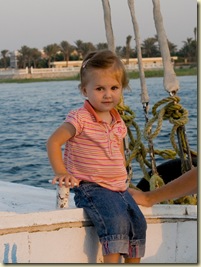 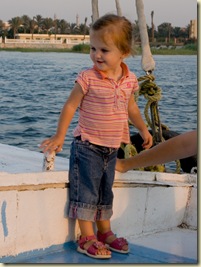 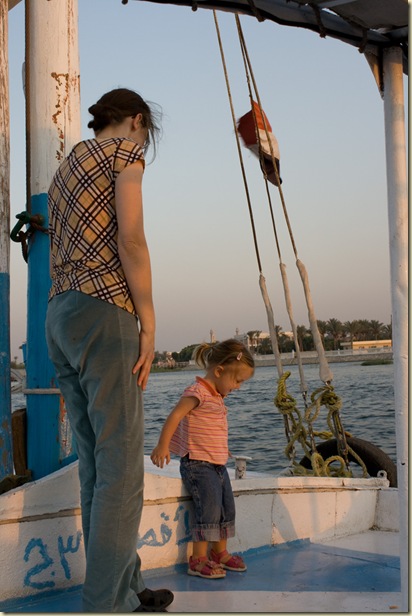 The sunset was beautiful; the skies were clear enough today that we actually got to see the sun set. That doesn’t always happen because sometimes it gets swallowed up by a haze of pollution long before it starts its brilliant daily finale of color. Today’s sunset was wonderful. 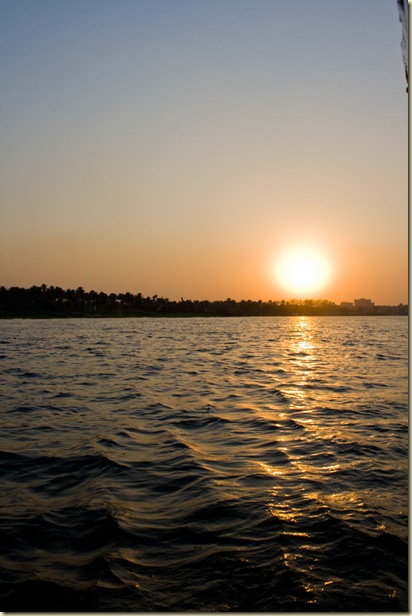 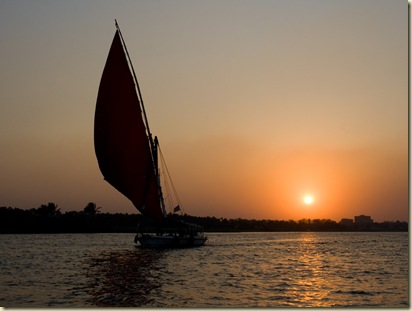 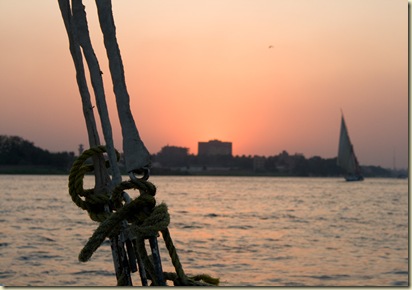 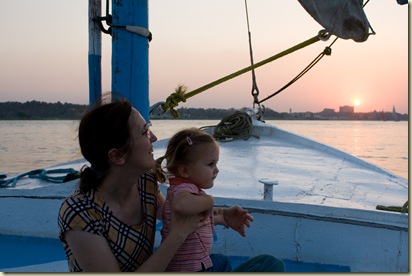 We walked home from the felucca ride, stopping on Road 9 for some gelato, which, by the way, felt so nice on my throat! Swallowing still hurts like the dickens so I ate my ice cream slower than usual; still, it was gone way too fast. Everyone got lemon, of course, except for Rachel, who got strawberry.

Andrew and Rachel ended up swapping flavors. Even though Rachel insisted that her favorite kind was strawberry, she kept sneaking spoonfuls of Andrew’s until it wasn’t worth it to even claim his as his own. I have a feeling that her declaration of favoritism was based solely on color, not on flavor, because she only had a few spoonfuls of her strawberry gelato.

In our post-gelato bliss, we continued our walk home, passing the newly opened Cinnabon. When we came to Cairo in 2006, the restaurant was Quizno’s; when we moved here last August Garden Foods Healthy Foods had just celebrated their grand opening—they went out of business a couple of months ago. Yesterday we saw them putting up the Cinnabon sign and painting the outside of the restaurant in Cinnabon colors. We were very excited because we happen to really like Cinnabon.

Tonight they were open! We walked by and commented how yesterday they had been installing ovens and there was no seating in the restaurant and how surprised we were that they were open already.

The manager was standing on the sidewalk and overheard us. He ran into his shop and brought out some free minibons for us, and not just any minibons—pecan minibons. We told him we’d be back. It will be hard to not go back too often. We’ve never had such temptation so close to our neighbourhood before…